Conservation groups prep for battle over drilling in NPR-A 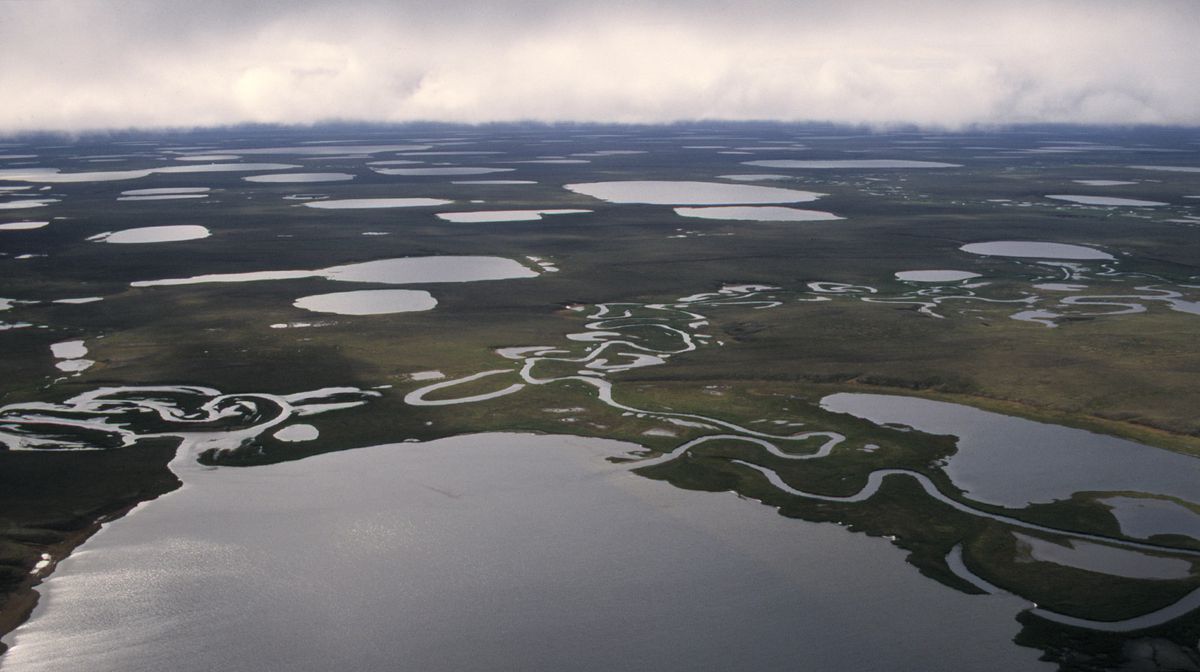 Lakes dominate the landscape in a northern part of the National Petroleum Reserve in Alaska. (Anne Raup / ADN archive 1997)

Lakes dominate the landscape in a northern part of the National Petroleum Reserve in Alaska. (Anne Raup / ADN archive 1997)

Oil industry boosters and Alaska politicians are joining President Donald Trump's administration to push for more development in an area of the North Slope that could hold huge oil reserves — over the objections of environmental groups that want existing protections upheld.

It's also the case 100 miles to the west at the National Petroleum Reserve in Alaska — the 23 million-acre, Indiana-sized tract that appears likely to be a major battleground over oil development during Trump's term.

Trump's secretary of the interior, Ryan Zinke, signed an order after an Anchorage speech last week that directed his agency to revisit a 4-year-old management plan for the reserve adopted by the previous administration — one that Zinke described as overly restrictive.

"The only path for energy dominance is a path through the great state of Alaska," Zinke said. "The president has declared — and thank you, Donald J. Trump — that the war on North American energy is now over."

Officials with Alaska Gov. Bill Walker's administration, buoyed by new oil discoveries in a previously overlooked geological formation, see the reserve as perhaps the most promising North Slope area for oil extraction in the near term, and they're even promoting a new plan to build a network of roads across it.

"We want to maintain our options as a state, but we are pretty focused on the NPR-A," Walker's natural resources commissioner, Andy Mack, said in a phone interview.

But while the name of the reserve suggests it's set aside solely for oil, the 1976 Naval Petroleum Reserves Production Act also directs the interior secretary to uphold environmental and subsistence values — particularly in sensitive areas like Teshekpuk Lake, which is treasured by conservationists and also is the calving grounds for a caribou herd.

In the refuge, industry groups have fought for access to an area with a name that suggests it's supposed to be preserved.

In the reserve, environmental groups are fighting to maintain protections for an area that sounds like it's set aside for drilling.

"People hear the name and immediately associate the entire area as a place where oil and gas development is its purpose," said Nicole Whittington-Evans, Alaska regional director for the Wilderness Society. "But that is not what the originating statute actually dictates. It has extraordinary wetlands and wildlife resources that need to be protected."

Some local officials and groups have already endorsed the moves by the new administration.

The review of the NPR-A management plan drew support from Harry Brower, the North Slope Borough mayor, to whom Zinke handed the pen he used to sign his secretarial order last week.

But many people in the region have nuanced views that don't fit neatly into categories, even if they still want to be heard, said Doug Whiteman, mayor of the 250-person village of Atqasuk in the middle of the reserve.

"Nobody speaks for this community — everybody out here's got a voice. We want the freedom to use these individual voices to help decide," Whiteman said in a phone interview. "Don't lock us up; don't open the gates wide open without talking to us here."

Industry enthusiasm for the reserve's potential has waxed and waned. Oil has never been commercially produced from its federal lands.

A ConocoPhillips project on Alaska Native lands within reserve boundaries went online in 2015. The first project on federal land, Conoco's Greater Moose's Tooth 1 in the reserve's northeast corner, is set to start up next year.

NPR-A was originally set aside as a naval fuel reserve in 1923 after reports of natural oil seeps at Cape Simpson, east of the town of Utqiagvik, formerly Barrow. Starting in the 1940s, the Navy and the U.S. Geological Survey drilled dozens of exploratory wells, but attention ultimately shifted to the huge discovery in Prudhoe Bay in the late 1960s.

Congress officially opened the reserve to industry leasing in 1981. But interest didn't pick up again until the mid-1990s, when discovery of the Alpine oil field to the west of Prudhoe Bay — and just to the east of the reserve — helped bring industry infrastructure closer.

Companies spent hundreds of millions of dollars on leases with the expectation that fields like Alpine would be found farther to the west, far into the reserve, said David Houseknecht, a USGS geologist.

But the wells that were drilled produced largely lower-value gas and only a little oil, he said, leading the USGS in 2010 to drop its estimate of the reserve's recoverable oil from 10 billion barrels to 1 billion barrels.

That estimate helped inform the Obama administration's approach to the reserve's current management plan, which was approved by Ken Salazar, then the interior secretary, in 2013.

At the time, Shell was drilling offshore in the Chukchi Sea, to the northwest of the reserve, in prospects thought to be far more productive than those on land. So the management plan was geared toward accommodating a pipeline and necessary infrastructure to move oil across the reserve — from the Chukchi Sea shore east to the trans-Alaska pipeline.

About half the reserve, meanwhile, was placed off-limits for oil and gas development in the Salazar plan — much of that in the southwest, which has drawn little industry interest. But the plan also doubled the size of another largely off-limits "special area" around Teshekpuk Lake in the reserve's northeastern corner, which has both high potential for oil discoveries and important habitat for birds and tens of thousands of caribou.

The lake, and land nearby, is a key area for caribou calving, where the Teshekpuk herd also gets relief from bugs. It's also habitat for birds that come from all seven continents, according to the Department of the Interior.

Obama administration officials say the plan — which took years to develop and incorporated more than 500,000 public comments — was the right mix of conservation and development.

"It was accepted by a lot of parties as a balanced, thoughtful, science-driven process," David Hayes, deputy interior secretary under Salazar, said in a phone interview. "The record that was developed as part of this was enormous and compelling."

But since then, two major developments have changed the outlook for the oil industry on the North Slope.

After disappointing results in the Chukchi Sea, Shell announced in 2015 that it was giving up its Arctic drilling program.

At the same time, other companies were announcing eye-popping oil discoveries just to the east of the reserve. Two of the finds — Conoco's Willow discovery and Armstrong's Pikka unit — came in a rock formation, the Nanushuk, that extends far to the west, all the way across the reserve.

More than 100 wells had previously been drilled into the Nanushuk but they had missed its potential because of the "subtle" way it traps oil, said Houseknecht, the USGS geologist.

The new discoveries, he added, were "rather stunning," given that history.

The new data suggests that USGS' 2010 estimate of the recoverable oil in the reserve — the one that dropped it to 1 billion barrels from 10 billion barrels — is low, Houseknecht said. And one element of Zinke's secretarial order asks his agency to look at "updating current assessments" of oil on the North Slope, with a focus on the reserve and the Arctic National Wildlife Refuge.

Oil companies are now pushing to make more land available for leasing in the reserve. So is Walker's administration, which is also proposing the new network of roads to support the industry and connect isolated villages on the North Slope.

Administration officials have quietly been circulating the idea for the road project, which Mack, the natural resources commissioner, said could also include corridors for other infrastructure like pipelines or power lines. He traveled to Utqiagvik last month to present the concept to the North Slope Borough Assembly, and Walker included it in an infrastructure wish list he recently sent to Trump's administration.

Additional development in the reserve, and the road project, would each bring their own benefits and drawbacks, said Fannie Suvlu, the mayor of Utqiagvik. Opinions on oil development largely depend on where projects are proposed and how they would affect subsistence lifestyles, she said.

"There's mixed feelings, as far as development goes," she said.

Environmental advocates fear that the road could cut through caribou habitat, and that reopening the management plan for the reserve would jeopardize protections around Teshekpuk Lake, given the new discoveries nearby.

"The development is happening and targeted right now in the northeast corner of the NPR-A," said Whittington-Evans with the Wilderness Society.

Others say that it wouldn't make sense to add opportunities for oil and gas development, given climate change's disproportionate effects on Alaska.

"This is a time for Alaska and our country to talk about transitioning off fossil fuels," said Elisabeth Balster Dabney, executive director of the Fairbanks-based Northern Alaska Environmental Center. "We'd like to not be talking about opening new areas for drilling."

Trump administration officials are promising to proceed deliberately, though they're not ready to say exactly what kind of changes they're envisioning for the management plan.

They've cast their approach as a reassessment of an anti-oil Obama agenda that put about half the reserve off-limits to oil and gas leasing.

"You can't deny the fact that the past administration was pretty restrictive when it comes to areas of Alaska," Kate MacGregor, Zinke's deputy assistant secretary for land and minerals management, said in a phone interview. "Access is the nascent stage of future supply."

It's clear, however, that nothing will happen quickly — a point that MacGregor acknowledged. Zinke's order gave the Interior Department three weeks to develop a schedule for review and revision of the reserve's management plan, but the environmental reviews and studies required for a new plan could take years.

"These pathways to future production — if you even get there — all start somewhere," MacGregor said.