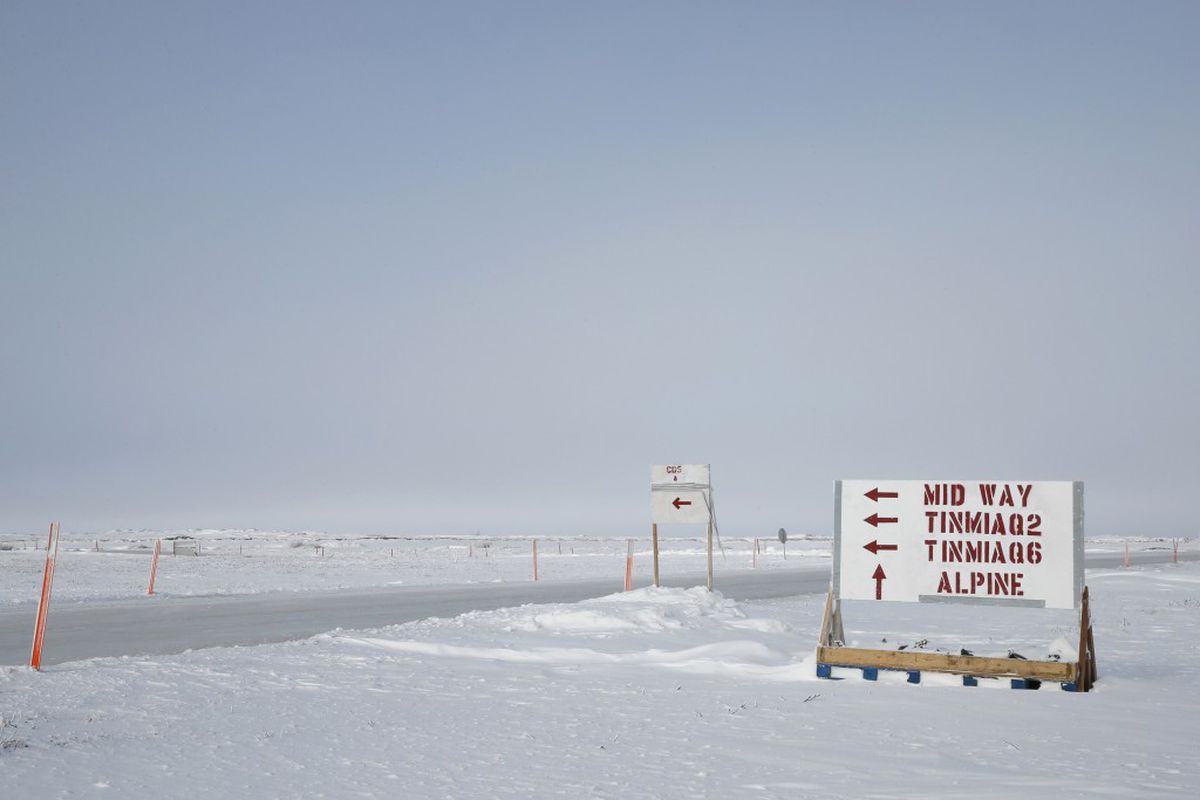 A sign on the North Slope points the way to the two wells, Tinmiaq 2 and 6, that are part of ConocoPhillips’ newly announced Willow discovery in the National Petroleum Reserve-Alaska. (Judy Patrick / ConocoPhillips)

A sign on the North Slope points the way to the two wells, Tinmiaq 2 and 6, that are part of ConocoPhillips’ newly announced Willow discovery in the National Petroleum Reserve-Alaska. (Judy Patrick / ConocoPhillips)

ConocoPhillips on Friday heralded a promising new oil discovery on its leases in the nation's petroleum reserve in Alaska that could produce up to 100,000 barrels of oil daily, possibly providing some replacement to depleted production from Prudhoe Bay.

The oil giant said its large acquisitions of acreage in state and federal lease sales in December were a "follow-up" to the big discovery, which it had kept secret. The large purchases in the lease sale are a sign the Houston-based oil company believes the oil play, or similar geological finds, may extend much farther.

The news of the Arctic discovery comes as Alaska faces forecasts of continued economic gloom, with low oil prices slamming the state budget and leading to thousands of layoffs on the Slope and in Cook Inlet oil fields and other industries.

But it also comes on the heels of two oil discoveries in the past year that could yield even larger quantities of crude, according to announcements by two independent oil companies.

"This discovery is tremendously exciting not only for Conoco, but also for the state of Alaska," said Joe Marushack, president of ConocoPhillips Alaska, in a prepared statement.

The discovery will also likely factor into Juneau lawmakers' discussions over oil-production taxes as they convene this month to begin considering reducing tax benefits for the Slope industry.

Supporters of tax credits say they have encouraged investment in oil fields and, before oil prices began sliding sharply, pushed employment in the industry to record levels.

Opponents say the state can't afford to be so generous with industry, especially when many other sectors are hurting.

Conoco said the discovery, known as Willow and located in the Greater Mooses Tooth Unit where other development is already underway by the company, could lead to a multibillion-dollar investment, providing thousands of jobs and generating revenues for the local, state and federal governments.

If oil is produced there, Alaska would receive half of the 16.67 percent of the federal share, or royalty, of oil produced from federal lands. The federal government would get the other half.

The discovery wells, about 4 miles apart, are called Tinmiaq 2 and 6. They are 28 miles west of the Alpine Central Facility processing oil at ConocoPhillips' large Alpine oil field.

The Willow wells were drilled in early 2016 in the northeastern portion of the National Petroleum Reserve-Alaska.

Once the federal government agreed to lease land in the Indiana-sized reserve, it was cracked open for oil development by Conoco and partner Anadarko Petroleum Corp., holding a 22 percent interest in the unit. The discovery was on federal land.

Conoco recently began oil production at the first producing field within the reserve's boundaries, CD5, where 20,000 barrels of daily production has beat expectations by 25 percent. It is beginning construction this winter at Greater Moose's Tooth 1, where peak production is estimated to reach 30,000 barrels of oil daily.

"The acreage acquired in the recent state and federal lease sales gives us running room to test the concepts that led to Willow and other NPR-A discoveries," said Richard Lunam, a top Conoco official.

The Willow wells were discovered in the Brookian Nanushuk geologic formation, relatively shallow rock that has been overlooked by Alaska's oil industry, as explorers scouted for the deeper and older pools of oil such as those at the giant Prudhoe Bay.

The Nanushuk and the related Torok formation were created roughly 100 million years ago as sediments from eroding mountains deposited across the Slope, when it was an oceanic basin. Caelus Energy and Armstrong Oil and Gas have announced two large Slope discoveries in the formations over the last year.

David Houseknecht, project chief for the U.S. Geological Survey's Energy Resources Program for Alaska, said the details provided by Conoco so far suggest the discovery is a strong candidate for development and oil production.

"It's all good," he said of the details.

The oil is light, so it could readily flow through the reservoir during production, unlike thick crude that sticks to rocks and is hard to produce. Light oil is also more valuable in the market.

He said the estimated size of the discovery is "respectable," with Conoco saying it may contain more than 300 million barrels of recoverable oil.

That would make it a bit larger than the Slope's Northstar field, now operated and owned by Hilcorp Alaska, he said. Oil production there began around 2000, reaching 70,000 barrels daily, though levels have since fallen.

Conoco did not say whether it has hired a third-party engineering firm to help confirm the data. But Houseknecht said the oil major would not make such an announcement unless it had solid evidence.

"It's probably already a pretty reliable estimate. It's like the old (Magic) 8 Ball. All signs point to yes," he said of the prospects for development.

"We have our own expert staff who know how to appraise these discoveries,"  said Natalie Lowman, Conoco communications director for Alaska.

The data gathered so far "provides a pretty solid technical foundation to confirm that Willow is a discovery with development potential," she said.

The company plans to learn more about the discovery starting this month by acquiring state-of-the-art 3-D seismic data to support previously gathered information, providing a closer glimpse of the formation.

Conoco said the Tinmiaq 2 well, with pay-zones containing light crude oil, was "tested and established good reservoir deliverability." The well had a sustained 12-hour test rate of 3,200 barrels of oil per day.

If permits are approved in a timely way and the project is economically competitive with other oil projects, Conoco said production could start in 2023.