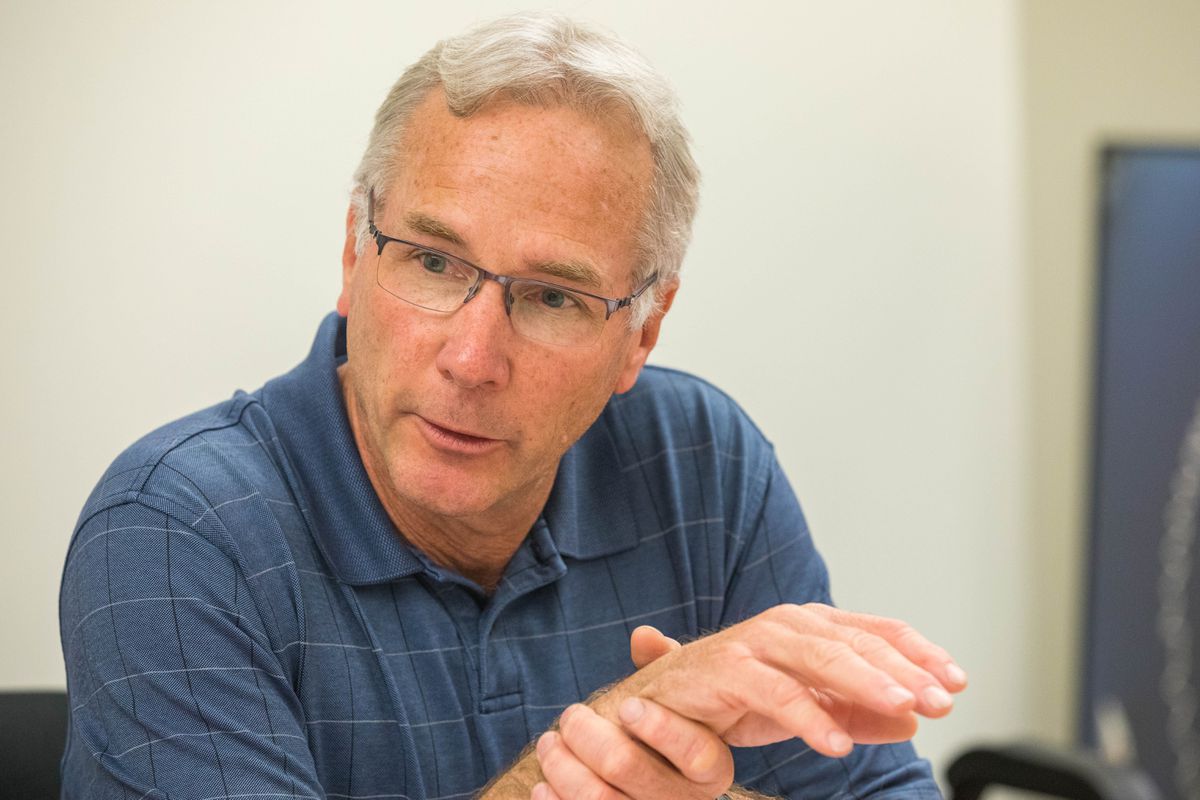 ConocoPhillips Alaska employees have a big, round target to hit that company leaders believe is the key to staying competitive.

And it's not a buried treasure map that points right to where the next exploration well should be drilled — although with the company's recent success indicates they might have one of those, too.

The target is $40 per barrel, and making the math work so all of the company's operations in the state are profitable at or below that key price point.

Particularly on the North Slope, where costs are unavoidably higher than in most other oil basins worldwide, the company has focused on making sure it can withstand the inevitable ups and downs of oil markets, Marushack emphasized.

That $40 breakeven has been hit at ConocoPhillips' large existing Alpine and Kuparuk River oil fields, but also applies to all of the greenfield projects it's working on as well.

Alaska Vice President Scott Jepsen said the $40 focus revolves around remaining competitive with Lower 48 unconventional oil plays for investment dollars within the company. Jepsen described the massive and ever-growing shale oil basins in Texas and North Dakota as "the center of gravity" for the oil business, noting those plays are "attracting tens of billions of dollars of investment this year."

Making $40 oil profitable keeps Alaska operations competitive, but he added that some of the oil being pulled from Texas is now done so for less than $30 per barrel.

The continued emphasis on cost is also a way to prepare the company for what its leaders believe will be ever more wild market swings.

While oil has momentarily steadied in the $70 per barrel range, few seem to believe it will stay there for long.

"Our chairman (Ryan Lance) said the higher the price of oil the greater the crash is going to be so we've got to be able to survive that volatility," Jepsen said.

The new mindset is also a far cry from just a few years ago, when companies Slope-wide were discussing the need for $70 oil just to break even on new discoveries.

"2015 was a very, very scary time for us so we did an awful lot to reduce our cost — as did everyplace else we that we produce — and we were very successful at reducing our costs and we've got to be able to maintain that," Marushack said.

Part of those savings are coming from doing more tests on pipelines and equipment that previously would have been routinely replaced regardless of its condition.

Jepsen said the company is also able to recoat the inside of existing oil lines to extend their working life without wholesale replacement, a technological improvement that has been adopted on a large scale in the last five years.

Further advancements in compressed seismic exploration allow the company to gather far more, and better, data than ever before for the same cost to inform geologists on where to drill.

Marushack added that some equipment redundancies have been engineered out of the company's equipment as well without sacrificing reliability.

However, getting to $40 still meant cutting its Alaska workforce from about 1,200 employees in 2015 down to 970 today. Its contracted labor force has also shrunk by about 35 percent over that time, he said.

"At $110 oil you're focused on getting every barrel you possibly can," Marushack observed about the lack of cost emphasis when prices were high.

The refocus on efficiency, combined with the emergence of Nanushuk formation plays on the western Slope, leads ConocoPhillips Alaska leaders to believe up to 400,000 barrels per day of new oil could be produced from the Slope by 2025.

Much of that would come from their fields, particularly the Willow prospect with potential for up to 100,000 barrels per day with a $4 billion to $6 billion development cost. The Bureau of Land Management announced the start of a scoping period Aug. 7 as the first step toward developing an environmental impact statement, or EIS, for the Willow development.

Two projects now in permitting — Hilcorp's offshore Liberty and Oil Search's Pikka — should be big drivers, too, along with other, smaller projects.

They see it as a "renaissance" on the North Slope, Marushack said.

For ConocoPhillips, bringing much of that newly-found oil online will mean developing projects near the Native Village of Nuiqsut, which is located just east of the company's work in the National Petroleum Reserve-Alaska and very close to its Putu and Stony Hill Nanushuk discoveries made this past winter. Early estimates on each of those have been pegged at about 20,000 barrels per day.

The company employed a series of significant steps to mitigate the impacts of drilling its Putu exploration well, just about three miles from the village last winter. The biggest measures were centered on eliminating diesel exhaust from the drilling rig and pad operations, which was upwind from the village of about 400 residents.

ConocoPhillips powered the rig and pad with low-emission generators placed farther from Nuiqsut and monitored air and water quality near the village before, during and after the work was done.

By all accounts the work went well, and such mitigation is also likely to be needed as the prospects are developed.

Marushack said the company listened to the concerns of Nuiqsut residents and did its best to address them. Residents' concerns led ConocoPhillips to postpone exploration drilling the previous winter.

"We believe we're going to have to continue to engage with the village, not only with Kuukpik, but with the village and listen to what they say and then try to figure out where there's some things that they could participate in," he said.

Kuukpik Corp. is the village corporation for Nuiqsut. The Putu well was drilled with one of its rigs.

Marushack noted that a portion of the royalties from oil produced in the NPR-A by law must go to mitigating the impacts of development in area communities.

ConocoPhillips is also one of the largest donors to Stand for Alaska, the campaign organized to oppose Ballot Measure 1, which aims to strengthen requirements for development projects in salmon habitat.

Jepsen said the company isn't exactly sure what direct impacts the proposed fish habitat permitting law changes would have on its operations, but the primary concern is with a new, public permitting process that could open avenues for lawsuits that don't exist now.

"If the initiative goes forward I could see a very lucrative path for those organizations that are opposed to oil and gas exploration on the North Slope to pursue something that can slow us down," Jepsen said.

The initiative's advocates, led by the nonprofit Stand for Salmon, stress that their primary goal is not to stop projects, but rather to codify in law best practices — and prevent them from being eroded by political forces — that are employed by Fish and Game in its habitat permit adjudications today.

The ballot initiative would also add public notices and comment periods to one of the few state public resource-use permits that currently does not have such requirements.

Jepsen added that while much of the company's work has little if any impact on anadromous fish habitat, its most common work that could be slowed is the annual building of ice roads that use water from area lakes.

Jepsen emphasized that those water draws are done in close concert with the Department of Fish and Game and are based on decades worth of data.