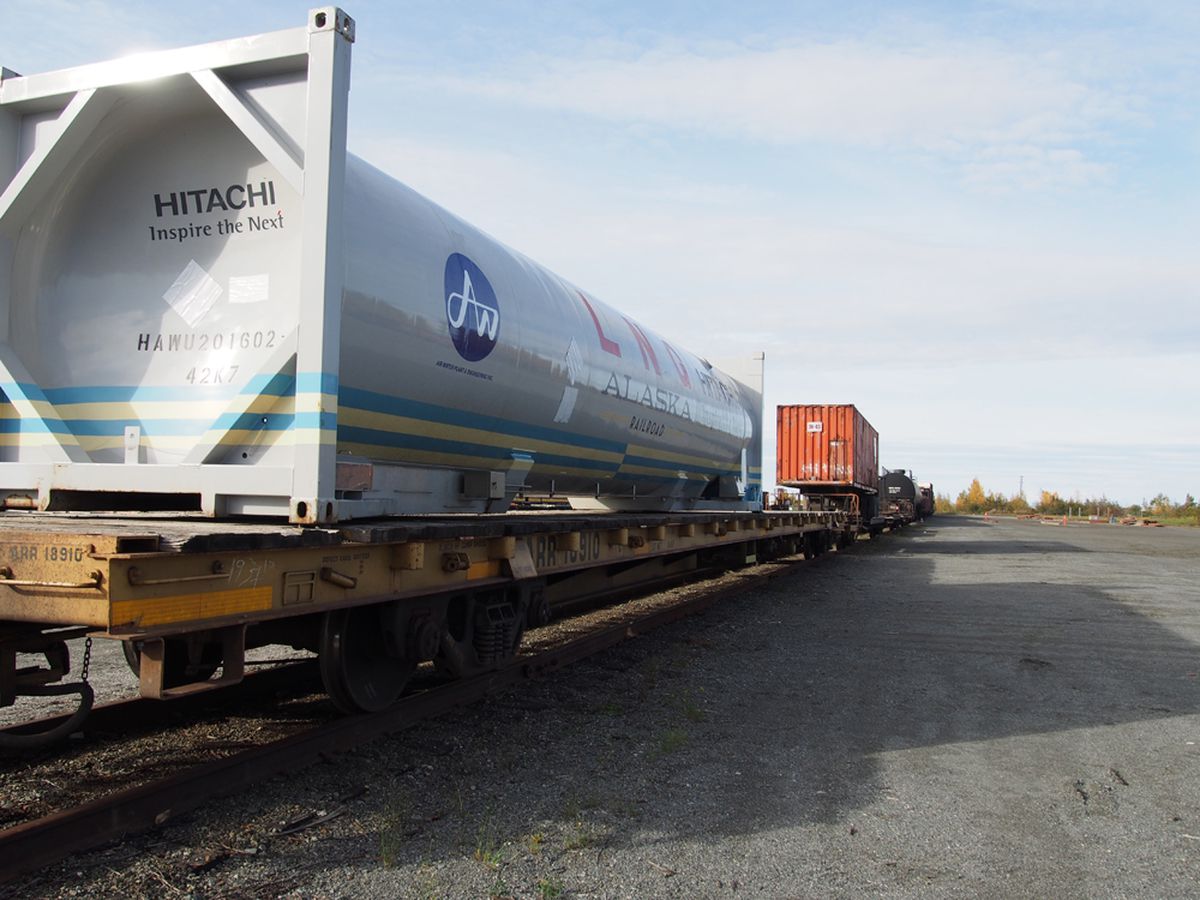 Moving LNG by rail from Houston to Fairbanks is part of a plan being pitched by Siemens to leaders of the Interior Gas Utility. (Photo courtesy Alaska Railroad)

Moving LNG by rail from Houston to Fairbanks is part of a plan being pitched by Siemens to leaders of the Interior Gas Utility. (Photo courtesy Alaska Railroad)

Interior Gas Utility leaders were largely measured in responding to a late pitch from Siemens Government Technologies on a new option for getting an additional natural gas supply to the Fairbanks area.

Pamela Throop, chair of the startup utility's board of directors and a longtime Fairbanks commercial real estate developer, said the Siemens proposal is "neck and neck in some ways" with the Alaska Industrial Development and Export Authority's $330 million comprehensive gas distribution and supply build out financing package.

Throop and other utility board members said the Siemens turnkey proposal, which includes a partnership with the Southcentral Knik Tribe, is attractive for its simplicity to the utility — it could provide LNG by rail to Fairbanks for a contract price without IGU investing in added liquefaction capacity.

However, they noted that the company still needs to secure the first, critical link in its LNG supply chain: a contract for natural gas.

"We have questions above and beyond dealing with the dollars — security of supply, transportation, all those kinds of things that we have to deal with. We have to make sure that they're capable of doing what they say they can do," Throop said in an interview. "They don't have a gas supply yet, either. They're working on one; so they can't really give us a firm price until they have a gas supply and that's really going to make all the difference in the world, depending on what they can bring that gas supply in for, in my opinion."

Siemens is in talks with Cook Inlet gas producers and believes it can get feedstock natural gas for approximately $5 per thousand cubic feet, or mcf. That would be a marked improvement over the $7.72 per mcf price IGU and AIDEA negotiated with Hilcorp Alaska on a short, three-year contract that runs into 2021, but would also be a significantly cheaper gas price than Southcentral utilities have inked of late on longer deals for much larger volumes of gas.

Recent contracts for a firm gas supply from Cook Inlet have been in the $7 per mcf range.

Former AIDEA board member Gary Wilken, now a member of the IGU board, said it took AIDEA and IGU 18 months of negotiations to finalize the $7.72 per mcf price with Hilcorp.

Getting a gas contract with favorable terms for the Interior could also be challenging because it is for a relatively small demand, likely starting at a little more than 1 billion cubic feet per year range and growing as Interior residents and businesses sign up for gas.

What's problematic for the greenfield project is the fact that no one really knows how quickly that new gas demand will materialize. It is dependent upon a variety of factors including the cost of alternative heating supplies, namely fuel oil and wood, as well as the number of customers willing to invest in new natural gas appliances and how quickly gas distribution infrastructure can be built out.

Converting to a new natural gas home heating system can cost residents upward of $10,000 without any sort of assistance program, AIDEA officials have long noted, which is a major potential hurdle for the Interior Energy Project.

"The question is: Is that (gas supply) real?" IGU board member and former Golden Valley Electric Association CEO Steve Haagenson said in an interview.

The company insists it could be shipping LNG to Fairbanks by early 2020 if it can reach an agreement with IGU by the end of the year.

Siemens is also investigating the prospect of sourcing its own gas directly from the Houston area where its modular LNG plant would be sited. Controlling the gas supply could bring the cost down to the $4 per mcf range, according to company representatives, but that would appear to be a longer term venture as well.

AIDEA and FNG have estimated their plan, with its state financing support, would result in an initial $17.30 per mcf burner tip price to consumers in 2020. That price could drop to the $15 per mcf IEP goal by 2022 as more customers are brought online.

Using IGU's contract price, Siemens would get LNG to the Fairbanks storage tank for $17.98 per mcf, according to the company — plus $5 to get it all the way to customers.

The Siemens cost would drop into the $16 per mcf range with $5 per mcf wholesale gas, according to the company, but that again would be delivered to the large LNG storage tank FNG is currently building and require costs for storage, regasification and distribution totaling about $5 to be added on to the customers' final price, Wilken highlighted.

Company representatives said the LNG cost could drop further if other industrial users — either in the Interior or Southcentral — could be secured.

Throop said the prospect of having another entity assume LNG plant construction and operational and transportation risks is particularly appealing.

"We don't care what their capital construction costs are; all we care about is the gas price in the contract," Throop said.

The Siemens plan starts with the company's modular "LNGo" liquefaction units that can produce up to 30,000 gallons of LNG per day. The plan is to initially install two LNGo units at a proposed industrial park near Alaska Railroad Corp. tracks in Houston.

The fuel would travel by rail to Fairbanks Natural Gas' 5.25 million-gallon LNG storage tank currently under construction in south Fairbanks for regasification and distribution to residents and businesses.

Once gas demand grew to where more than four of the LNGo units were needed the company would look at installing a single, larger LNG facility, according to Siemens officials.

Under the plan, IGU would sign a 20-year liquefaction services agreement, or LSA, with the Knik Tribe but the responsibility for executing the contract would flow to Siemens through a separate contract with the tribe. IGU would also sign a transportation contract with the Alaska Railroad, but that cost would be rolled into the LSA terms.

The company is partnering with the Knik Tribe because the federally recognized Tribe has access to federal loan and grant programs that could provide lower-cost financing to the project, according to Siemens officials.

It would be located on land owned by Knikatnu Inc., a Native village corporation.

Wilken said that while Siemens is generally a well-regarded company with significant resources it currently has just one LNGo plant in operation in Dawson Creek, British Columbia, so the reliability of the system is still somewhat an open question.

"We need to be sure we're getting a plant that's going to work in an Arctic environment," he said.

Haagenson said managing a utility is a constant balance between cost and reliability, but added that "a utility in Fairbanks is kind of held to a higher standard," because a home can go from warm to frozen in less than eight hours when the heat is cut off at 40 below zero.

Wilken emphasized that he wants Siemens representatives to pull back the curtain on the details of their supply chain costs.

A Siemens spokesman said via email that the company has "confirmed pricing from feedstock providers at a quoted rate less than the current IGU contract price," but declined to provide details on the specific supply chain costs.

"While the comprehensive pricing will be fully visible and transparent to the IGU prior to entering into any long-term contract, we first need IGU to advise us if they are willing to enter into preliminary negotiations culminating in a memorandum of understanding, at which time we'll carefully review all pricing along the entire supply chain," the Siemens statement reads.

Throop said IGU leaders will be talking with Siemens and Knik representatives and try to stay on the company's timeline of reaching a deal — or not — around the end of this year.

"We need to make a decision one way or the other and that's what I'd like people to know," she said.

Picking the Siemens plan would also require approval by the AIDEA board of directors, as it would be a major change to the Interior Energy Project development plan IGU and the authority have already agreed to.