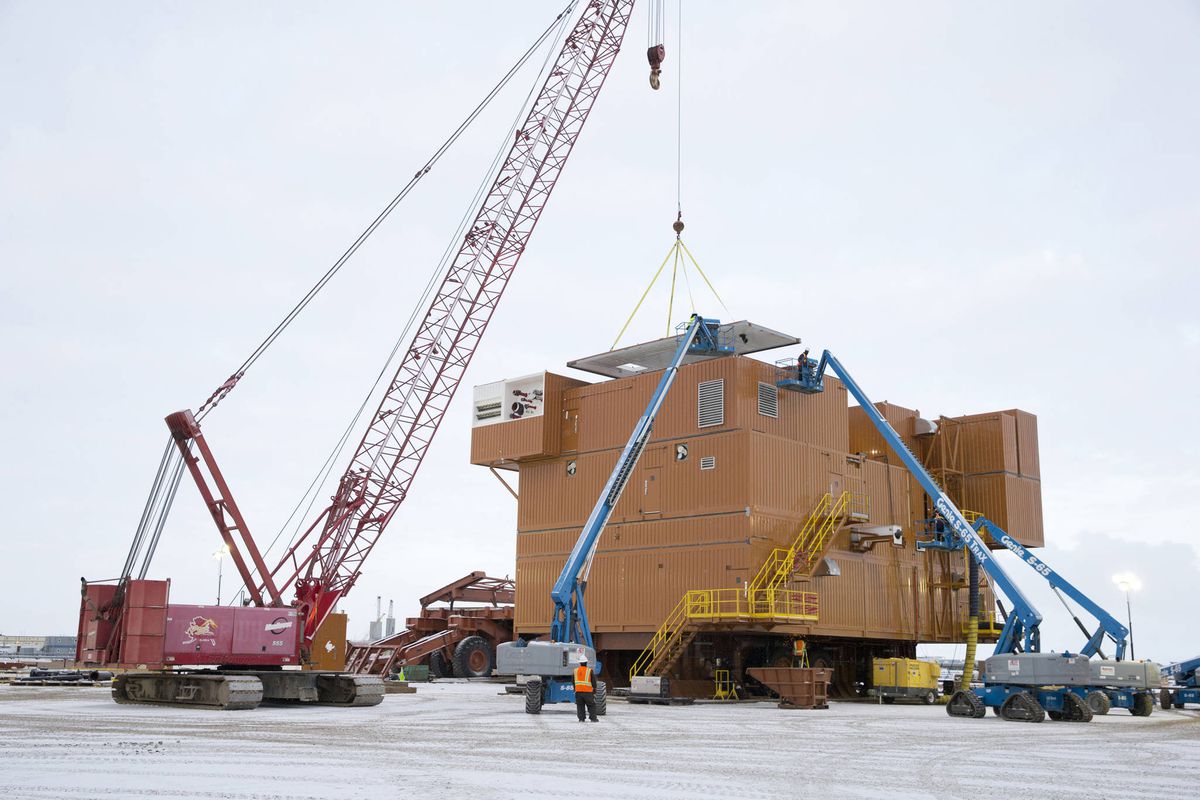 Update, 2:30 p.m. Friday: The rig was back on the road Thursday evening, according to Doyon.

The mishap delayed the uniquely gigantic rig’s inaugural trip to the oil fields, but caused no injuries or spills.

The module for Doyon 26, as the rig is formally known, went off a road in the oil company’s Kuparuk field, according to a statement from Natalie Lowman, a ConocoPhillips spokeswoman.

“The module is partly off the road,” Lowman said Thursday morning. “Emergency response personnel and operations are formulating a recovery plan to safely return the drill rig module to the road.”

Thursday evening, Lowman said the rig was expected to be back on the road that night.

It happened Wednesday evening, said Sarah Obed, a spokeswoman with Doyon. ConocoPhillips hired a subsidiary of the regional Alaska Native corporation to build the rig.

Obed said she did not know why it left the road. Obed said once they got it back on the road and moving again, that would allow for a full assessment of the accident area. No other components of the rig were affected, Obed said.

Photos circulating on social media show a module, which looks like a multi-story building, tilting slightly as it leans off the road. The section is called the engine complex, and houses the power generation equipment.

The accident closed Spine Road east of the Milne Point check station. It scraped off some of the insulation that surrounded the Kuparuk Pipeline.

“There were no pipeline leaks and no injuries,” Lowman said. “The pipeline is still operational and there has been no impact to production.”

The extended-reach rig involved in the accident is scheduled to begin drilling at ConocoPhillips’ Alpine field in the coming months.

At 9.5 million pounds, it will be able drill out more than seven miles. ConocoPhillips says it’s the largest mobile land rig in North America, up to two times more powerful than existing rigs.

[From January: ConocoPhillips prepares to deploy ‘The Beast’ on the North Slope]

The rig was built over multiple years, Obed said. Doyon’s biggest goal is getting it in operation.

The mishap comes at a turbulent time for Alaska’s oil industry, following the collapse of oil prices amid the coronavirus outbreak.

ConocoPhillips and Oil Search announced operational cutbacks this week. Also, ConocoPhillips on Wednesday canceled flights for hundreds of North Slope workers for the next two weeks to prevent the spread of COVID-19.