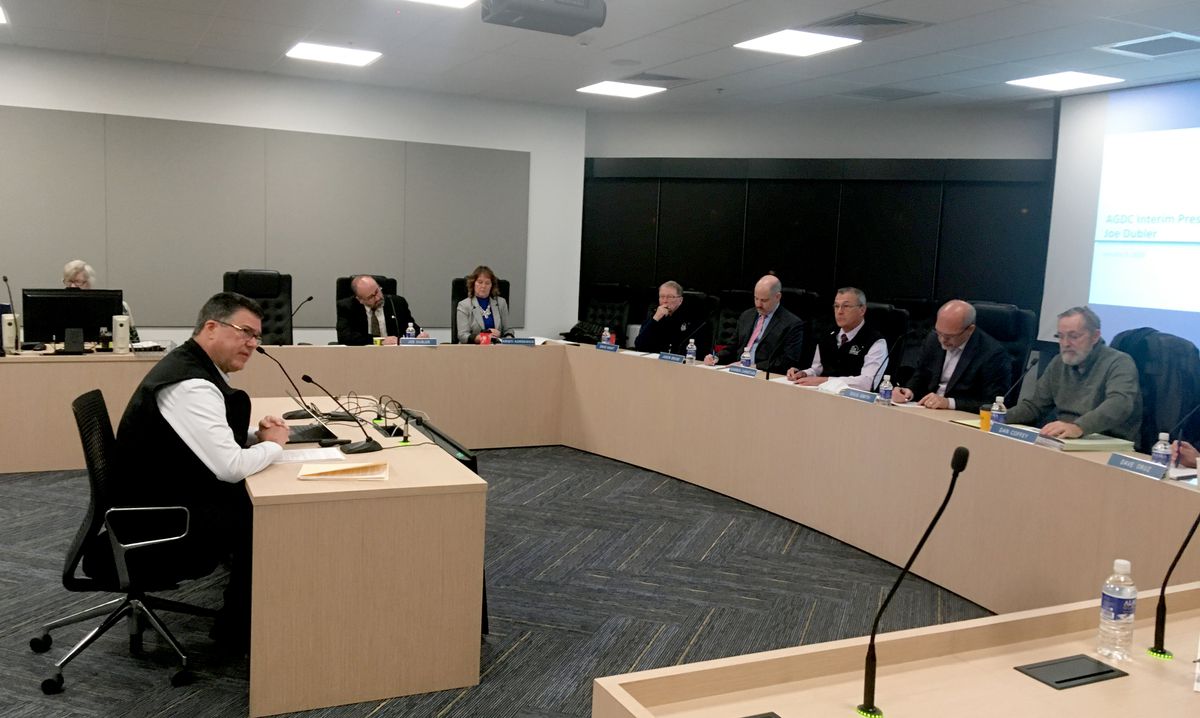 Former Alaska Gasline Development Corp. President Keith Meyer speaks to the board of directors in Anchorage on Jan. 9. (Photo by Elwood Brehmer)

Former Alaska Gasline Development Corp. President Keith Meyer speaks to the board of directors in Anchorage on Jan. 9. (Photo by Elwood Brehmer)

The state corporation that has been leading the proposed multibillion-dollar Alaska North Slope natural gas project since late 2016 wants someone else to take over the development effort. The corporation’s plan assumes that an economic analysis currently underway determines the project is economically viable.

If no one steps up to take over from the state, which has been paying just about all the bills the past four years, the Alaska Gasline Development Corp. board of directors appears ready to sell off the project’s assets — which could include permits, studies and engineering work — in a formal bidding procedure.

The first step in the unfolding process is an update to the 3-year-old, $43 billion cost estimate for the Alaska LNG project that would transport North Slope gas through more than 800 miles of pipeline to a liquefaction plant and marine terminal in Nikiski. Fluor, a 108-year-old global engineering and construction company, is under contract to AGDC to prepare the update. The state corporation expects to receive Fluor’s numbers later this month and, after review by its own team, will present them at its June board meeting.

Fluor, based in Texas, is experienced in LNG plant construction. It’s part of a joint venture that was awarded the engineering, fabrication and construction contract for the $30 billion Shell-led LNG Canada project under construction in Kitimat, British Columbia, about 100 miles southeast of Alaska’s southern border with Canada.

The AGDC board on April 9 approved a resolution adopting a strategic plan to direct state involvement in the Alaska LNG project through June 2021. The document itself is confidential, but the board reviewed in public session the underlying assumptions of the plan.

• The updated cost estimate is complete by June. AGDC has been working — with help the past year from BP and ExxonMobil — to reduce construction costs in hopes of making the project economically viable, and has talked up Fluor’s upcoming estimate as potentially validating its work. Project construction and operation costs, and the price of gas going into the liquefaction plant, are the biggest drivers of the final sales price for the LNG.

• The next assumption is that the cost update and economic analysis show the project “has a potential to deliver LNG to markets at a competitive price.” The state has been looking to Asia as the best market for Alaska gas. Though current spot-market and long-term contract prices in an oversupplied Asian market are far below break-even costs for an Alaska LNG venture, they could increase later this decade if demand returns to a strong growth rate. But competition from other suppliers will be intense.

• The plan assumes that whichever partner(s) step forward to take over as lead sponsor will “recommend moving forward with further development of the Alaska LNG project.”

• The Federal Energy Regulatory Commission stays on schedule and approves the Alaska project. The commission issued its final environment impact statement in March and is due to vote in early June on AGDC’s application to construct the gas treatment plant at Prudhoe Bay, the pipeline, LNG plant and marine terminal. FERC does not consider a project’s economic viability — only its environmental impact and safety issues.

The assumptions that went into the strategic plan also included a timeline for the state to get out as lead sponsor of the project. That included:

• AGDC will continue looking for partners, and a transition to a new project sponsor will be underway by Jan. 1, 2021, as the AGDC board of directors “does not support” the state continuing as the sole project sponsor past Dec. 31, 2020.

• The board, working with the Legislature and the administration of Gov. Mike Dunleavy, “will define an acceptable role, if any,” for the state in the project.

• If “there is not sufficient interest from strategic parties” to lead the development effort, AGDC will publicly solicit interest from others to take over the project.

• And if that doesn’t attract a new leader for the project, “AGDC will put the Alaska LNG project assets up for sale” in a formal bidding process, according to the staff presentation at the April 9 board meeting. The corporation has the authority under state law to sell the project assets.

The approximately 600 acres for the LNG terminal in Nikiski, however, is not owned by AGDC. ExxonMobil, BP and ConocoPhillips bought the privately owned parcels several years ago — when the companies were leading the effort — and the state never reached a deal to take control of the property.

After the three major North Slope oil and gas producers declined in late 2016 to spend more money on the Alaska LNG project, AGDC took over as lead, funding the application process and environmental review at FERC. The producers cited economic reasons in their decision to opt out of the development effort.

In the past decade, the Alaska Legislature has appropriated almost $480 million toward the LNG project and the smaller, so-called “backup” plan of a $10 billion North Slope gas project to serve Alaska, without an LNG export component. Most of the state money was spent on engineering and permitting for that Alaska Stand Alone Pipeline, or ASAP.

Between the two projects, the corporation has spent about $460 million of the state appropriations.

ExxonMobil and BP have been contributing to the Alaska LNG effort the past year, limiting their spending to no more than $10 million each toward finishing the FERC process and other work.

As the work on the FERC-led environmental statement is nearing its finish, AGDC’s spending has slowed down. The corporation spent about $9.5 million in the first nine months of the fiscal year that ends June 30.

The corporation has legislative authorization to use its available funds through the end of the next fiscal year in June 2021.

Dunleavy, now about 18 months into his four-year term, has steadfastly advocated that the state step away from leading the effort and look for private companies to take over the LNG project.

Just as the larger, export-driven project has been unable to pass the economics test in a highly competitive global marketplace, so too has the ASAP line proven to be unaffordable for the small in-state market. Among the assumptions that went into AGDC’s strategic plan is the statement that the ASAP project “has been determined to not be economically viable.”

Since then, Cook Inlet legacy producers pulled out of the basin and sold their assets to Houston-based independent Hilcorp, which invested heavily in production to meet local needs and now produces more than 80 percent of Southcentral Alaska’s gas supply.