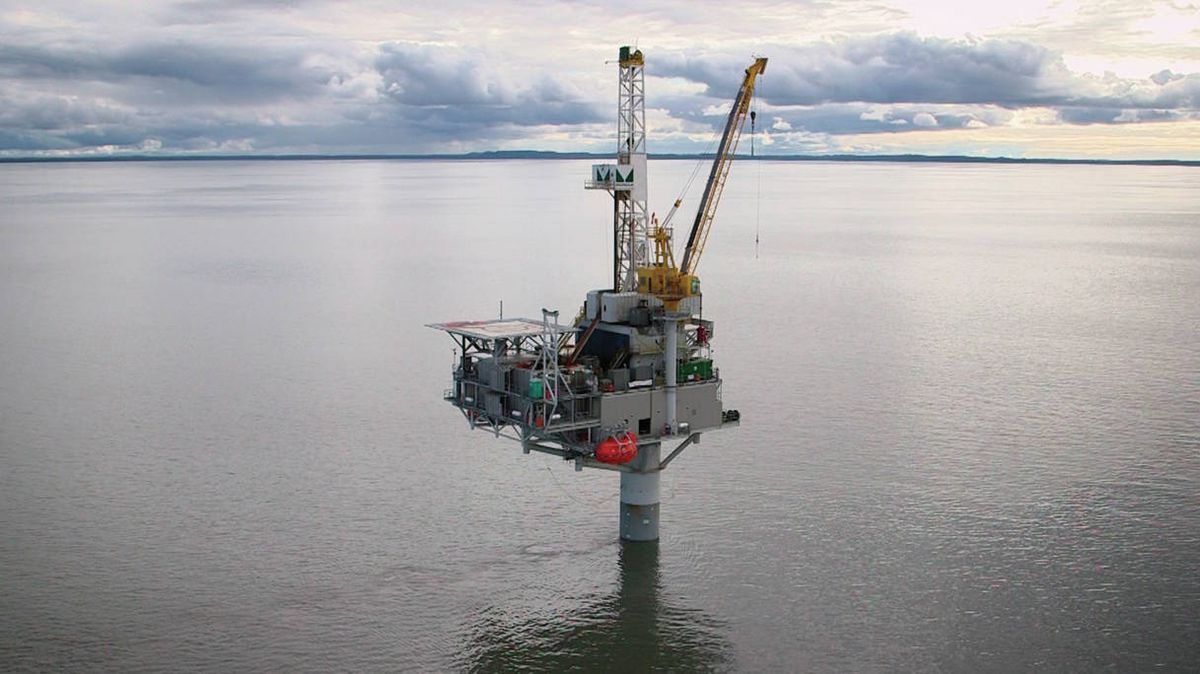 An undated photo of a Furie drilling rig in Cook Inlet. The bankruptcy sale of Furie Operating Alaska has closed with new owner John Hendrix taking over. Hendrix, a former oil and gas executive and adviser to former Gov. Bill Walker, said the company will be focusing on its core gas business and abandoning its previous efforts to expand into oil production. (Photo courtesy Furie Operating Alaska)

An undated photo of a Furie drilling rig in Cook Inlet. The bankruptcy sale of Furie Operating Alaska has closed with new owner John Hendrix taking over. Hendrix, a former oil and gas executive and adviser to former Gov. Bill Walker, said the company will be focusing on its core gas business and abandoning its previous efforts to expand into oil production. (Photo courtesy Furie Operating Alaska)

It’s back to basics for a Cook Inlet gas producer pulled out of bankruptcy earlier this summer.

Just more than a month in, Hendrix, a petroleum engineer, said he and other company leaders are focused on mining and analyzing data from Furie’s four wells and the rest of the company’s operation to better understand how production can be improved and where savings can be found.

The formerly Texas-based Furie filed for bankruptcy in August 2019. At the time, the company owed lenders approximately $440 million and was owed about $105 million in refundable tax credits from the State of Alaska, according to the bankruptcy petition.

In 2015, Furie installed the Julius R platform over the Kitchen Lights gas field in the central portion of Cook Inlet, which at the time was the first new development platform the Inlet built since the 1980s.

However, the company’s financial challenges were significant; Furie absorbed a loss of $58.5 million in 2017 despite netting $25.4 million from gas sales, according to bankruptcy court filings. The situation worsened in 2018 when the company sold $42.8 million of natural gas but took a loss of nearly $152 million.

Furie lost $21.4 million in the first quarter of 2019, when a freeze-up in a gas production pipeline kept the company from supplying Homer Electric Association and Enstar Natural Gas Co. with gas for more than a month.

Furie officials estimated the value of the company’s assets at between $10 million and $50 million in their initial bankruptcy filings.

Furie’s contract with Enstar is currently its only firm supply contract but it has interruptible contracts with HEA and Matanuska Electric Association as well, according to Hendrix.

Enstar spokeswoman Lindsay Hobson wrote via email that officials for the Southcentral gas utility look forward to working with Hendrix and continuing their relationship with Furie.

“We are particularly optimistic that Mr. Hendrix’s experience in Alaska’s oil and gas industry will enhance Furie’s financial footing and overall gas supply in the Cook Inlet,” Hobson wrote.

He initially won a December bankruptcy auction for Furie and with a $15 million bid through his newly formed company Hex Cook Inlet LLC, but attorneys for Furie and its largest lenders — primarily investment firms — claimed Hendrix did not subsequently negotiate the details of the deal in good faith.

An attorney for Hex denied the allegations regarding the bankruptcy sale negotiations in February but said they made it difficult for Hex to obtain the financing needed to close the sale.

Then in April, the Alaska Industrial Development and Export Authority approved a loan of up to $7.5 million to help fund Hex’s acquisition of Furie; negotiations with another interested buyer for Furie fell apart in April when the coronavirus pandemic sent financial markets and economies worldwide into a tailspin, sources said at the time. That reopened the opportunity for Hendrix, through Hex, to purchase Furie.

According to court filings, the final foreclosure sale price was just more than $5 million, but the overall bankruptcy settlement calls for Hex to repay at least $15 million back to Furie creditors for a final cost that will likely be between $20 million and $25 million, according to Hendrix, when the details are resolved.

Since taking over Furie, he said the company has overcome a couple small production challenges and consolidated its small contract workforce of about 15 employees from three contractors, two of which were Lower 48 companies, to Anchorage-based Udelhoven Oilfield System Services.

Internally, Hendrix said he is working to empower employees in the belief that will help them take pride in Furies operations and strengthen their commitment to running a safe and successful company.

“We want to bring ownership all the way down to the guy turning the valve,” he said.

Furie previously struggled with its identity at times and shifted its business philosophy multiple times in the few years the company operated in Cook Inlet, he said.

Ambitions to drill for oil — ultimately stalled by the lack of state tax credit payments, Furie officials told state regulators in prior years’ development plans — stretched Furie too thin, Hendrix said, but he stressed that won’t be happening again.

He noted that the insurance needed to operate as an oil company versus solely a natural gas supplier is a $500,000 per year expense Furie is not benefitting from.

Furie, which remains the Kitchen Lights Unit operating entity, is strictly a gas producer and “not an oil company,” Hendrix emphasized.

He added that exploring for oil is not in the plans at this point, but could be a long-term prospect if market conditions improve and funding is available.

“We’re just very realistic about what our capacity is,” Hendrix said. “You don’t promise the world if you don’t know what you have.”

As for near-term changes, Furie is seeking approval from the state Department of Environmental Conservation to discharge its produced water into Cook Inlet instead of piping about 2,000 gallons per day to shore.

He described the produced water as being drinkable quality and said the process of sending it to shore resulted in a frozen flow line that halted gas production in 2019 and forced Furie to purchase $17 million of gas to try to meet its supply commitments at the time.

“We’re a clean gas company that makes water with our gas and the water is clean,” Hendrix said.