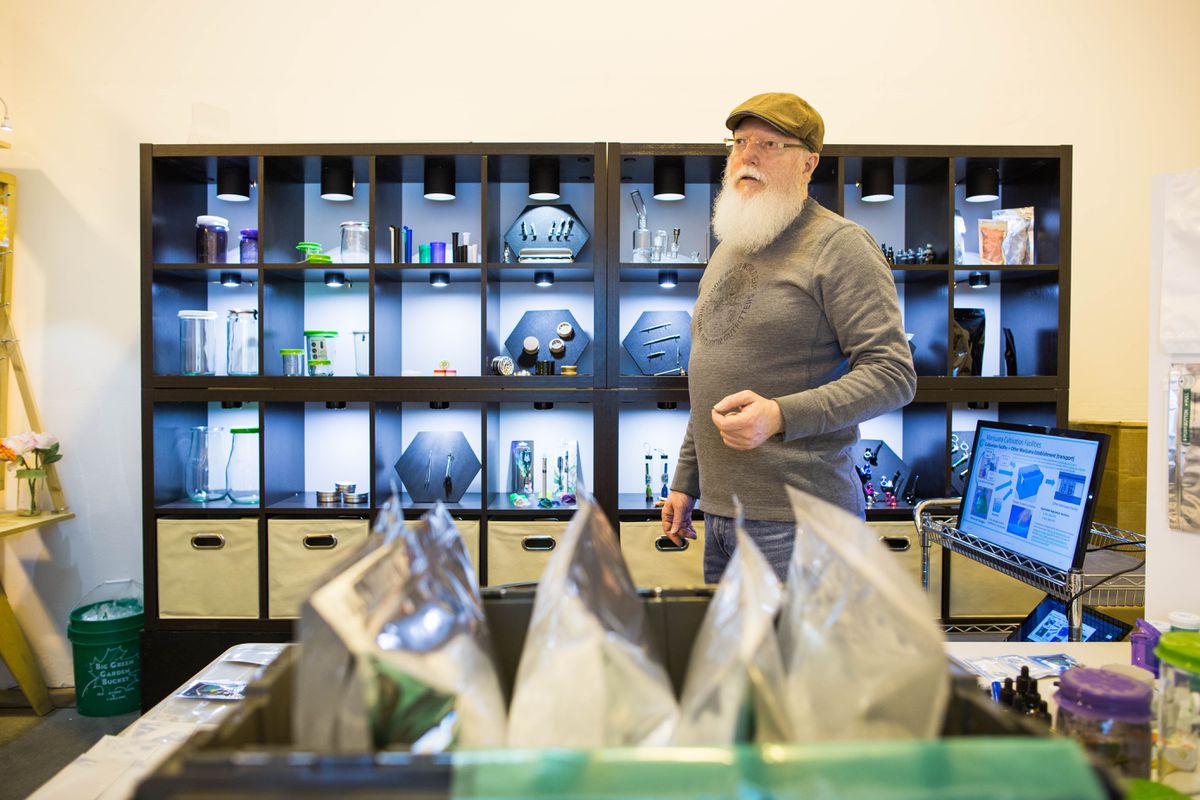 More than two years ago, Leif Abel sat around a table with his brother and his father and a list of about 50 possible names for the marijuana cultivation business they wanted to start in Kasilof.

After considering whether to take on an image that clearly sends a message about cannabis or perhaps something more discreet, they landed on the name Greatland Ganja and a logo that prominently features a cannabis leaf.

"We're proud of what we're doing," Abel said. "We're trying to project a culture of openness and acceptance of people within this subculture that is coming into main society."

As nascent marijuana businesses in Alaska are grappling with nitty-gritty state regulations as they prepare to open later this year, they're also making crucial decisions about what kinds of companies they want to be and how to market themselves to customers -- and avoid legal pitfalls in doing so.

Many entrepreneurs are scrubbing the words "weed," "pot," other slang and even "marijuana" from their vocabularies -- if they hadn't already -- in favor of the term "cannabis" instead. Some are opting for names that don't reference the plant at all, like "Einstein Labs" or "Marcy Wellness Center."

"We're trying to actively fight against stereotypes, stigma, and make it a more socially acceptable product," said Bobby Burns, who owns the marketing firm AkCannaBiz in Palmer. He only uses the word "cannabis" in his work with clients.

Others have applied for licenses with names like "Doobie Depot" and "Weed Dudes."

And though the burgeoning industry is just a few months away from taking off, people still have a lot of questions: How do you decide who your target demographic is, and will they like the fact that there's a pot leaf in your logo?

In an industry that's so long been illicit -- and still is, federally -- the answers aren't easy.

"People are wrestling with this on a regular basis," said Jim Dyer, co-owner of Anchorage company JKD Brands, which sells containers and packaging for businesses in the marijuana industry. "They talk about it constantly -- 'What can I do? What can't I do?' How much to say, how little to say."

Jana Weltzin is the owner of JDW LLC, an Anchorage law practice where she focuses on marijuana businesses navigating the new industry.

Though the main part of her work is helping clients with issues like permitting, compliance and leasing, she talks to clients about branding decisions, too.

"You need to look at, 'If I want people to spend $80 in my store, who's that demographic?' " she said. "That demographic is middle- to upper-class, young professionals, soccer moms. … It's hard to hit an $80 ticket when your marketing really appeals to people who are, for better lack of a word, really married to the stoner stereotype."

Sara Williams plans to open a retail cannabis store, Midnight Greenery, in downtown Anchorage. Williams and her husband got stoned one night in December 2014 and decided on the name because they wanted something that sounded distinctly Alaskan, but wasn't overwrought.

But simply finding a name doesn't mean it will be easy to broadcast it to the world. Weltzin said that, generally, a business dealing in cannabis can't get a federal trademark. And television and radio stations that have federal licenses might not run marijuana ads.

Midnight Greenery has built up more than 2,200 likes on its Facebook page over the past year and a half.

"We don't have the ability to use a lot of normal media markets like TV," Williams said. "We have to get creative."

Her business has grown its following through giveaways of pot in the past, and is now shifting to giving away things like pipes, event tickets, and other incentives for sharing posts. Williams said she's even run into roadblocks trying to sponsor cannabis-related posts on Facebook to get more eyeballs on them.

Businesses also aren't allowed to claim in ads that using marijuana has curative or therapeutic benefits. Instead, it's safer to share news articles or add disclaimers to Facebook and Instagram posts. Weltzin also encourages companies to add fine print that says they are only licensed to do business in Alaska, because social media marketing is bound to cross state lines.

[Read more: Alaska's rural pot market could be grounded before it even takes off]

Some business owners want to distance their identities even further from the marijuana industry.

"We don't want to be 'obviously' connected to cannabis," the ad read, "more like 'intuitively' connected. … Green shouldn't be a focus color, but it can certainly be used as a highlight according to the designer's creativity."

Stinson owns the business with her son and daughter, and they are planning to open a retail location in Spenard. Later, they want to get into the cultivating and processing business, too.

"We want people to take us seriously," Stinson said. "We want to create a different image that people have of marijuana."

She uses medical marijuana and says her family got into the business mostly to educate people about marijuana uses outside of just "getting high."

"Not all bars are Jimmy's on Fifth Street," Weltzin said. "I don't think there's one right way to do it over another."

Abel, one of the owners of Greatland Ganja, said he's worked on making a name for his company through clothing sales and a website, and by getting involved as an advocate for the industry. He estimates that the business has spent around $12,000 on branding.

But what if someone spends time and money marketing a business that, for some reason, doesn't end up opening?

"For the people that believe in themselves and put themselves out there, failure is not an option," Weltzin said.

The advice Abel got more than two years ago, when Greatland Ganja chose its name, was not to make reference to cannabis.

"We thought, two years from now, that might change a lot and it's better to be on the leading edge than stick to some adage," Abel said. "This is a societal change that's happening."

Marketing businesses ready to cash in on marijuana branding are also getting into the game.

Travis Madden, president of Eagle River-based marketing firm Eos Creative Media, sees a battle looming over who will be able to establish their name fastest.

"Out of all the things required for licensing, the marketing is where you're freest," he said. "To some extent there needs to be haste. Once you've made a decision, you do need to get marketing. That's what this is going to be -- a branding war."

He steers his clients toward a more professional, discreet, polished name and look.

Madden has seven marijuana clients, and eight clients in other fields. He said he's seen some marketing firms proceed with caution, perhaps for fear that other clients might abandon them for working with the cannabis industry.

Burns, of AkCannaBiz, is weighing whether to launch that company as its own business.

"There's some concern about whether the cannabis industry in Alaska alone could support our business," said Burns. AkCannaBiz has made logos and web designs for several companies in the past and has about five clients right now.

Dyer, at JKD Brands, noticed a niche in the market for marijuana packaging and labeling and decided to try to fill it.

His small warehouse in South Anchorage has rows of customizable glass jars, bags, prescription-style canisters and even lip balm containers, blank and ready to be designed.

Because stores aren't up and running yet, he said, most customers buy his products just to figure out what they'll want when they're finally in business.

A recent marketing panel at The Boardroom in downtown Anchorage even focused specifically on helping cannabis entrepreneurs figure out how best to sell themselves. The panel, appropriately, took place on April 20 and started at 4:20 p.m.

"I would encourage anyone to be subtle," said Bruce Schulte, chair of the new Alaska Marijuana Industry Association and also chair of Alaska's Marijuana Control Board, at the panel. Schulte was speaking there as an individual, not a representative of the board. "Don't do anything that's going to alarm people. Because oddly enough, as comfortable as we are with the cannabis culture, some people are absolutely terrified by the symbol of a marijuana leaf."