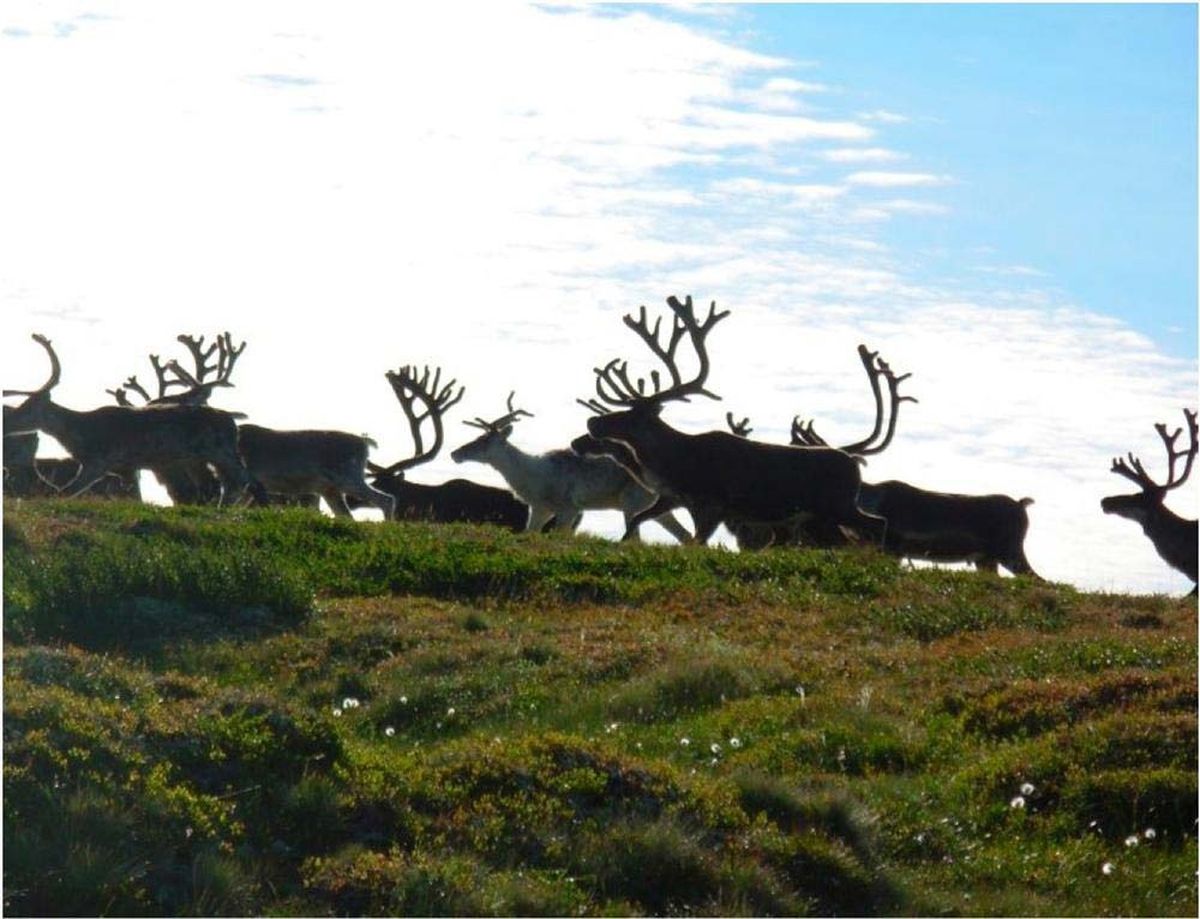 Reindeer roam St. Matthew Island in the 1960s, before they died off.

Reindeer roam St. Matthew Island in the 1960s, before they died off.

Six thousand reindeer once lived on a remote island in the Bering Sea that was briefly their paradise. In what has become a classic story of wildlife boom and bust, no reindeer live on St. Matthew Island now. Three scientists just looked back at the St. Matthew's reindeer herd and found that an extreme winter probably pushed the stressed animals to their deaths.

The story began in August 1944, when the U.S. Coast Guard corralled 29 Nunivak Island reindeer on a barge and floated the animals north to St. Matthew Island, more than 200 miles away and one of the most remote places in Alaska. Coast Guard officials had earlier in the year placed a radio navigational system on the island, along with 19 men. The reindeer were intended as a roaming food source should the men be cut off from supply shipments.

The men never shot a single reindeer; the Allies were winning the war, and the Coast Guard pulled its men from the island. They left the reindeer.

This was a fine situation for the animals at first -- their only predators had disappeared, leaving them on a 32-mile long, four-mile wide island rich with their favorite food, lichen.

Biologist Dave Klein first stepped on the island in 1957, 13 years after the Coast Guard had abandoned it. Klein, 82, now a professor emeritus for the University of Alaska Fairbanks' Institute of Arctic Biology, hiked the length of the island with field assistant Jim Whisenhant in 1957. They noted that the herd of 29 reindeer had increased to more than 1,300 animals.

Klein returned to the hard-to-reach island six years later. He could hardly believe how many reindeer were there.

The scene, with its 47 reindeer per square mile, foreshadowed a crash ahead.

That's what Klein found on a return to the island in the summer of 1966. In the three years since his last visit, the herd of 6,000 had shrunk to 42, a number that included only one male that had abnormal antlers and probably was unable to reproduce. Reindeer skeletons littered the tundra.

The herd had busted. During the next decade or so, all the reindeer of St. Matthew Island died off; the largest mammal there now is the arctic fox.

Klein found the story so intriguing that he mentioned it often over the years in conversations about the Bering Sea.

Recently, he shared his thoughts with two climatologists; he suspected that an extreme winter might have forced the stressed population of reindeer to the brink. Soon, Martha Shulski and John Walsh were helping Klein reconstruct the events of the extraordinarily harsh winter of 1963 to 1964.

Shulski, a former Alaska climatologist who is now director of the High Plains Regional Climate Center at the University of Nebraska, and Walsh, chief scientist at UAF's International Arctic Research Center, dug up weather records from the nearest official weather station to St. Matthew.

That station is located 200 miles south on St. Paul Island. The scientists pored over a reanalysis of area weather variables provided by the National Centers for Environmental Prediction.

They found -- and described in an article in the November/December 2009 issue of the magazine Weatherwise -- that the winter of 1963-1964 was one of the most extreme on record in the northern Bering Sea.

During February and March 1964, the reindeer experienced almost constant windstorms, the nastiest of which featured an atmospheric pressure typical of a Category 3 hurricane. Blasting northerly winds combined with below-zero air temperatures to create wind chills below minus 40 degrees Fahrenheit for a week straight in early February, and a low wind chill reading of minus

Perhaps even more damaging to the reindeer were record amounts of snow. St. Paul, Alaska, received 140 inches of snow during the 1963-1964 season.

"The higher snow depths and hard crusts on the snowpack ... meant the reindeer were virtually prevented from obtaining any of their already depleted food resources," the scientists wrote in Weatherwise. They concluded that only 42 reindeer survived the storm. When Klein examined the skeletal remains during his 1966 visit, he saw that the bones of fetal reindeer nestled within the bones of their mothers revealed that "most of the pregnant females had died about the time of the storms or shortly thereafter."

The reconstruction of extreme weather events has given Klein some closure on a mystery he had pondered since he visited the island in the late 1960s, and all three scientists now appreciate the vulnerability of some groups of animals.

"In isolated or fractured environments, wildlife populations can be extinguished by severe weather events," John Walsh said in a presentation about the St. Matthew reindeer he gave at the 2009 Fall Meeting of the American Geophysical Union in San Francisco.

This column is provided as a public service by the Geophysical Institute, University of Alaska Fairbanks, in cooperation with the UAF research community. Ned Rozell is a science writer at the institute.