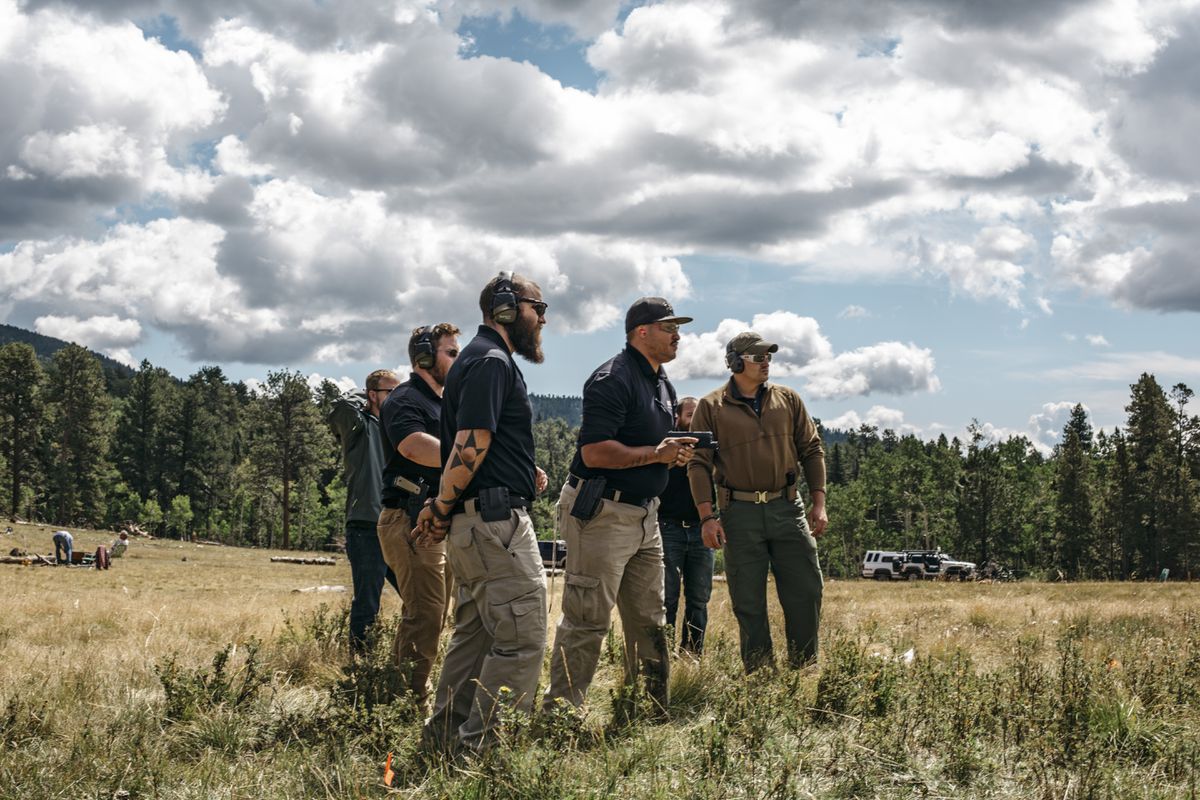 DENVER — It's nighttime at the Herbal Cure, a south Denver marijuana shop and grow house tucked into a parking lot beside the highway. Inside is a marijuana bounty: thousands of dollars' worth of cannabis plants, boxes of marijuana-infused chocolate, jars of $360-an-ounce weed with names like Frankenberry, Lemon Skunk and Purple Cheddar.

Chris Bowyer, a lanky combat veteran turned cannabis security guard, is outside. He has a .40-caliber pistol on his hip and a few extra magazines stored away, and he is talking about his work on the battlefield. Not the one in Iraq — the one in Colorado, where criminals seeking to breach marijuana businesses face veterans trying to stop them.

"This is my therapy," Bowyer said, heading for a place where burglars broke in recently. He checked a fence for signs of a new incursion, then headed to an office to note the night's activities in a rigorously organized logbook. "This is what we did in the military."

In Colorado, a curious marriage has formed between the booming retail cannabis industry — legal in the state since 2014, but not in the eyes of the federal government — and young war veterans, more than 200 of whom have taken jobs protecting marijuana businesses across the state. They spend their days and nights in urban marijuana shops and suburban warehouses and on rural farms, warding off the burglars who have become hallmarks of this cash-heavy, high-value business.

For some, a cannabis security job is a way station toward the police department or law school. For others, though, it is a vocation with purpose, a union of two outsider groups leaning on each other in a nation uncertain about how to accept them.

"It's almost a kindred spirit kind of thing," said Bowyer, 30, sitting in an office with a computer, a bulletproof vest and a booklet detailing marijuana products marketed under the name Jimi Hendrix. Marijuana growers and sellers "recognize that there is another group of guys who have their own talents," he said, "and that we are here for them."

No industry is immune to thievery. But the owners of Colorado's 978 marijuana shop licenses and 1,393 marijuana grow licenses are particularly vulnerable. Because the federal government considers marijuana illegal, many banks won't work with cannabis businesses, forcing them to deal in mountains of cash.

[Alaska has yet to see a legal pot sale. But some banks are already shutting down accounts.]

Perhaps more significant, their product is also lucrative for criminals: A pound of marijuana worth $2,000 in Colorado can be sold for $4,000 or $6,000 across state lines. Stores and grow houses are often soft targets in darkened parts of town. And unlike cash, marijuana is untraceable, easily sold on Craigslist or driven to dealers in Chicago and New York.

"The black market is still booming," said Cmdr. James Henning of the Denver Police Department. Contrary to the popular narrative, marijuana is a burglar's typical prize. "They don't get cash," the commander said. "That's usually in the big old safe, and they can't get into that. Usually, it's plants and finished product."

The department said it believes that the city's marijuana businesses have been targeted by organized groups, though it has no evidence that the groups are linked to foreign cartels.

Surveillance videos of some burglaries show thieves sawing through the roofs of businesses, tracking law enforcement with police scanners, and tying up employees. In one case, in southern Colorado, a pair of guards spotted four men in tactical gear carrying AR-15 rifles through a field. The watchmen, former Marine snipers wearing night-vision goggles, scared them away with warning shots.

Denver, one of the few jurisdictions compiling data on crimes at marijuana businesses, has 421 pot-growing houses and shops. It recorded 192 burglaries and thefts at such businesses in 2015. In Aurora, a suburb with 19 operating pot shops, 18 burglaries and robberies have occurred since 2014.

But some business owners do not report break-ins, because they worry that they will be seen as targets or attract inspectors who will find a violation.

Criminals have netted anything from a few marijuana-laced sodas to a quarter-million dollars in plants. In June, much worse occurred: Two armed men entered a pot shop in Aurora, called Green Heart, and killed a guard, Travis Mason. The police called it a botched robbery.

Mason, 24, a former Marine and father of three, was believed to be the first cannabis employee to die on the job in Colorado, and the episode alarmed the industry. Some security businesses reported a rush of requests for armed guards.

"Thieves in this industry are getting much more brazen, much more aggressive," said Ryan Tracy, 38, general manager at the Herbal Cure, which now has a guard on duty every night.

[Veterans are using pot to ease PTSD, despite scant research]

Into this world stepped Bowyer, fresh out of the Marine Corps. He joined the military in 2004 at the age of 17 to see the world. He ended up in combat, most notably in Iraq in 2006 and 2007. A bookish Episcopalian, he had considered the priesthood. After experiencing war he lost his faith.

When he left the military, he wandered in search of a tribe. He took a job as a frack hand in North Dakota and at a moving company in Colorado Springs. Unsatisfied, he moved to Denver and mined Craigslist for work. Then he found an ad for a company called Iron Protection Group.

"The way it read, it was written by guys like me," he said.

It was. Iron Protection Group was formed in 2014 by Hunter Garth, Cory Aguillard and Caleb Patton, Marines who had served in Afghanistan but were disoriented in the civilian world. They wanted to find jobs for former fighters who were now sleeping on one another's couches, living on ramen noodles and roaming in search of a purpose and a sense of family. Two Army veterans joined them in founding the company.

"It started out as brothers helping brothers," said Patton, 31.

In some ways, it was a natural marriage, formalizing a relationship forged in Vietnam, where marijuana became a balm for soldiers seeking to calm the demons of deployment. Garth said that about half of his employees smoke marijuana, though he asks them to refrain from doing so eight hours before a shift.

"Eight hours jigger to trigger," he said, is the rule.

At a shooting range tucked into the Rockies, 10 employees of Iron Protection Group are training. Most wear khakis and company-issued polos. Many sport beards and tattoos.

They are led by Glenn Weatherly, 34, a former weapons and intelligence sergeant in the Army who served four tours in Iraq.

"Range is hot," he tells his men. "Engage your targets."

The guards train their eyes on mock criminals made of paper. Bullets fly, and they reholster.

Behind them waiting for his turn to shoot, is Curtis Simmons, 30. He spent four years in the Army, including a stint in the Korangal Valley of Afghanistan, a scene of fighting so fierce it was known as the Valley of Death. When Simmons left the military, he took a job at Whole Foods.

"I was definitely an outcast," he said. "I hate to use the words 'liberals' and 'tree-huggers,' but that's the world I was brought into, from completely different upbringing." He quit after two years.

Working in the marijuana industry, he said, makes him feel "like a protector." There are liberals and tree-huggers there, too, but they understand him, he said: He smokes to keep the symptoms of post-traumatic stress disorder at bay, and he gets recommendations about cannabis strains from his security clients. "They want to know: 'What's your issues?'" he said.

Simmons would like to become a police officer. But you can't be a policeman if you can't pass a drug test.

The men take a break. There is cursing and laughing and ribbing, and it sounds like a party. Or, under the scorching Colorado sun — with the crackle of machine-gun fire coming from a group across the valley — a bit like war.