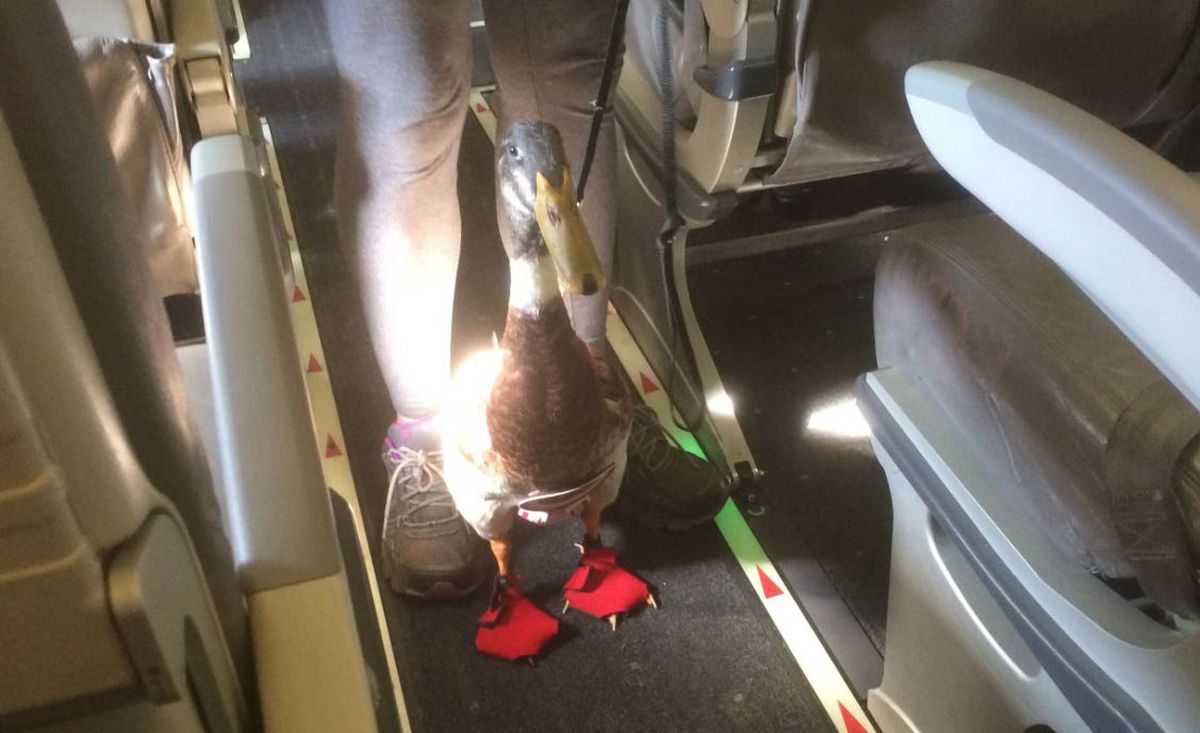 Daniel, an emotional-support duck, on board a recent American Airlines flight. (Mark Essig)

Daniel, an emotional-support duck, on board a recent American Airlines flight. (Mark Essig)

Mark Essig was settling into his puddle-jumper flight from Charlotte to Asheville, N.C., on Monday when he noticed an unusual passenger boarding the plane.

It was a duck. Making his way down the aisle.

The duck's human introduced him to their fellow, now-amused passengers: This was Daniel Turducken Stinkerbutt, or Daniel for short. He is a 4 1/2-year-old Indian Runner duck and is her emotional-support animal, she explained.

"I heard a few maybe semi-critical mutterings, like, 'Now I've seen everything,' " Essig told The Washington Post. "But most everybody was delighted to have a duck on a plane. As they should be."

Like many other passengers, Essig snapped a few photos while Daniel and his human were boarding. After takeoff, Essig tried to concentrate on light reading during the flight, but he kept inadvertently glancing toward the duck, just a row ahead and to the right of him.

When he saw the duck staring out the window, he couldn't resist taking one more picture.

After the flight, Essig posted his photos on Twitter.

"My seatmate, (from) CLT (to) AVL, is this handsome duck named Daniel," Essig tweeted first. "His gentle quacking eases the sadness of leaving #SFA16," the Southern Foodways Alliance conference in Mississippi.

"I was expecting that this might amuse a couple of my friends," he said. What he didn't anticipate was that the photos would go viral.

It turned out that a duck wearing shoes and a diaper on a plane was too much for the Internet to handle.

Essig posted two more photos and a video: one of Daniel in his full red-shoed, diapered glory, and another of the duck wagging his tail while his owner explains that it means that Daniel is happy. Both tweets were shared thousands of times.

The most popular one, however, was a picture of Daniel as the duck seemed to stare forlornly out the airplane window: "Daniel, the duck on my flight, likes to look at the clouds," Essig stated simply. That photo had more than 5,000 retweets and more than 11,000 likes.

[How a service dog opened an Alaska veteran's world (plus photos)]

The encounter amused Essig but also piqued his curiosity about ducks as support animals — he happens to be the author of "Lesser Beasts," a book about humans' complicated relationship with pigs. After the flight, he looked up Daniel's breed and discovered that Indian Runner ducks do not fly.

"My guess was that he was gazing out the window, looking at the clouds, and the sight triggered a deep ancestral memory of what it was like to fly himself," Essig said, laughing. "I'm almost certain that's (what) he was thinking."

Within two days of Essig's tweets, Daniel had become an Internet sensation, getting featured on BuzzFeed, ABC News and Cosmopolitan, among many other sites.

The attention surprised Daniel's owner, Carla Fitzgerald of Wisconsin, "because to me, having an emotional-support duck is normal – it's my new normal."

Fitzgerald adopted Daniel in 2012, when he was two days old, she told The Post in a phone interview Wednesday. Less than a year later, Fitzgerald, a former horse-and-carriage driver in Milwaukee, was involved in a serious accident.

"Someone who was paying more attention to the phone than the road hit me from behind, with enough force to bust up the carriage," she said. Her horse was badly injured, and the crash sent Fitzgerald hurtling toward a metal-grated drawbridge. For months, she was immobile.

"It took them four months to teach me how to walk again," Fitzgerald said. Along with the physical pain, she suffered post-traumatic stress disorder, something she describes as "hell."

After the accident, Daniel knew things were different – and responded without ever having been trained.

"He would notice something wrong, whether it be my pain or my PTSD," Fitzgerald said. "He would come and lay on me and (give me) lots of hugging and lots of kisses. And if he notices that I'm going to have a panic attack, he would give me a cue to lay down by trying to climb me."

At home, Fitzgerald says Daniel communicates with her in other ways: If he needs a new diaper, he walks to his changing table. If he wants food, he walks to the refrigerator or to his feed bowl. Outside of bedtime, he always wears shoes and a diaper, she said, because he is so used to carpet and linoleum.

He apparently enjoys movies, but only "super G-rated" ones. (Daniel responded well to "The Peanuts Movie" but got upset during a chase scene in "The Good Dinosaur," Fitzgerald said.)

"He doesn't identify with other ducks because he's imprinted on humans," Fitzgerald said. "As far as he's concerned, he thinks he's people with feathers."

Her living room is full of toddler toys that Daniel enjoys, particularly anything that has a button to push or makes a sound, such as keyboards and music boxes.

"And God forbid one of the batteries runs out," Fitzgerald said. "He stomps his feet, he raises his hackles, he huffs and he gives you stink-eye. And if you don't change those batteries right now, he gets snippy. He can also tell you when he needs a new diaper."

Since the accident, Daniel has accompanied Fitzgerald everywhere, mostly car rides. Monday had been Daniel's first time flying on a plane (or flying, period). She provided a note to the airline from her doctor, who has said it is in Fitzgerald's best interest to have Daniel around for support, but otherwise had a smooth trip. The crew on their first leg, before their connecting flight to Asheville, even insisted on posing for pictures with Daniel and presenting him with a "Certificate of First Flight."

"Here's the thing. Who are we to say what is and what isn't an emotional-support animal or what can and cannot be a pet?" Fitzgerald said. "Or what they can do for people who have PTSD like I do? Having it is hell."

For the time being, Fitzgerald does not have any other immediate travel plans but said that Daniel will no doubt accompany her on her next trip. She said she thinks that people responded positively to Daniel because he's unique – but also because he keeps to himself.

"He is obedient and he wears a diaper harness, " she said. " I make sure before he goes in public that he has a shower, so there's no smell to him. W hen he's in public, he behaves. He's not flapping and running around and chasing people."

However, Fitzgerald might be a little more prepared next time since, as her friends put it, "Daniel broke the Internet" after his first plane ride.

"I didn't know that a little Indian Runner duck who weighs six pounds could cause such an uproar," she said.