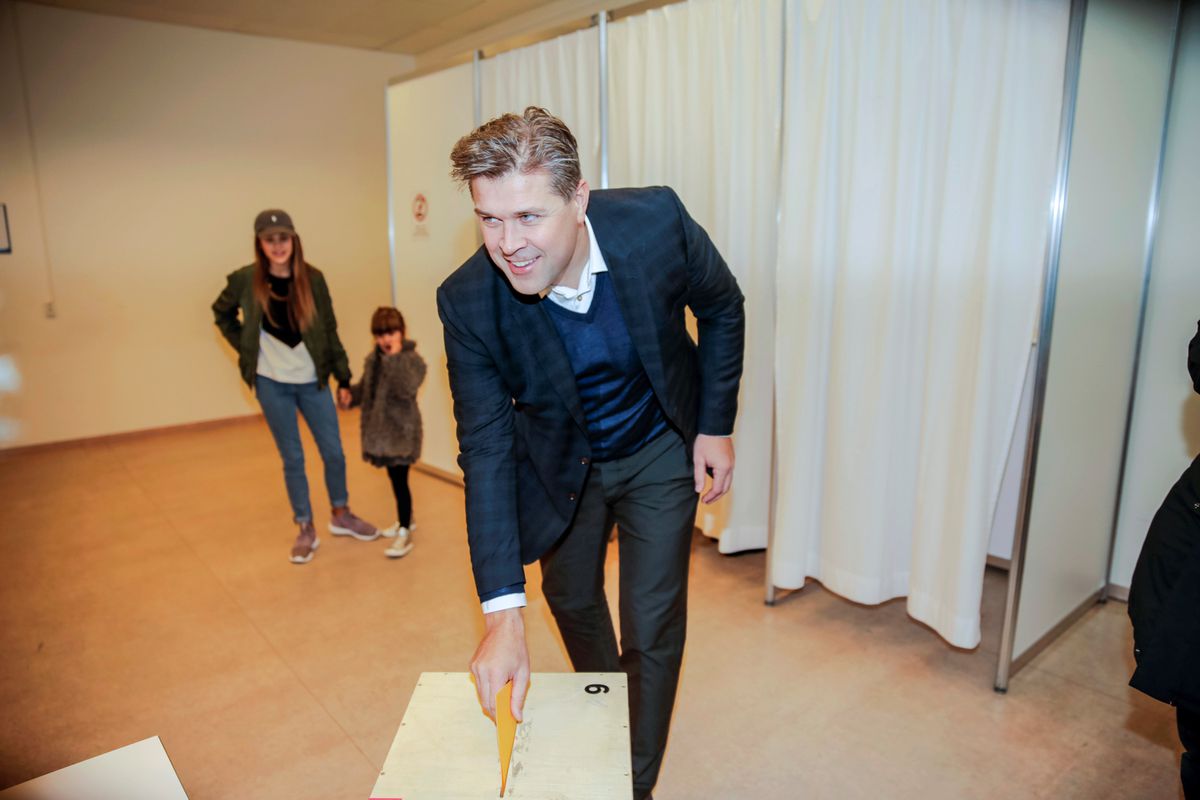 Bjarni Benediktsson of the Independence Party votes during the parliamentary election in Kopavogur, Iceland October 29, 2016. REUTERS/Geirix

Bjarni Benediktsson of the Independence Party votes during the parliamentary election in Kopavogur, Iceland October 29, 2016. REUTERS/Geirix

The man who probably will be Iceland's next prime minister says he knows how to deal with the global wave of populism that's threatening the established order: Deliver plenty of economic growth and jobs.

Bjarni Benediktsson, 46, leader of the conservative Independence Party, on Sunday emerged as the big winner in the nation's snap election. The populist Pirate Party, which had led in some polls even though it is only four years old, largely failed to live up to its hype. In a year when the British people voted to leave the European Union and political outsider Donald Trump is the Republican nominee for president, Icelanders were persuaded to vote for the status quo.

"We just took a stand against populist ideas," Benediktsson said in an interview Sunday in Reykjavik. "What we've been saying lately is, don't overspend, don't over-promise, just keep your way when things are going well. They were calling for us to push the refresh button and we said, 'Well, there's no need to."'

Even so, Benediktsson, finance minister in the outgoing government, will need to use all his negotiating skills to put together a viable majority. Due to the governing Progressive Party's poor performance in Saturday's vote — it only retained eight of the 19 seats won in 2013 — the next coalition will necessarily have to be expanded to at least one more party in a country where the center is losing ground.

In Benediktsson's favor: the lowest unemployment rate and one of the highest economic growth rates in Europe. And that only eight years after the implosion of its banking system plunged Iceland into the worst recession in six decades and turned it into a financial pariah.

"This is going to be a completely different set of challenges than we were faced with three or four years ago," Benediktsson said. "So it's going to be exciting. I think good times are ahead for Icelanders."

The Progressive Party was badly punished by voters as a result of its former leader's dealings with offshore accounts, while Benediktsson's party increased its support. Final results showed that nearly one in three voters cast their ballots for Independence, making it parliament's biggest force by far. The Pirates and the Left-Greens, which had been tipped by pollsters as potential winners, can't even match the Independents' 21 seats if their forces are combined.

Although the trained lawyer often talks of the need to "rebuild trust" between the Icelandic people and the politicians in the wake of the 2008 bust, Benediktsson's electoral success was largely attributable to the strong rebound in the economy.

In fact, one of the main tasks of the next administration will be to make sure there's no overheating. The country's unemployment rate has fallen from its March 2010 peak of 9.3 percent to just 2 percent, while the economy is projected to grow at an annual rate of about 4 percent this year.

But Benediktsson does face economic challenges. A seemingly unstoppable surge in the number of tourists has helped push the krona up 12 percent against the euro this year, while recent pay rises of 13 percent are way above any productivity gains.

Should he become Iceland's next prime minister, he will also be expected to stick to the current plans on the lifting of capital controls and with the outgoing government's confrontational strategy with U.S. funds burned by the 2008 crisis.

While the Pirate Party fell short of expectations, the loose collective of Internet activists and direct democracy activists did gain a sizable following that will make it the second-biggest party in parliament, along with the Left-Greens. Its gains could have been stymied by heavy rains and wind on Saturday, which kept turnout down and potentially the younger voters at home. A total of 195,200 votes were cast for a turnout of 79.2 percent, down from 81.9 percent in 2013.

The Pirates, who decry the rise of Trump in the U.S., haven´t given up on potentially joining a government.

"Right now there are so many options on the table, so many ways a coalition could be put together," said Smari McCarthy, one of its three spokespeople. "There are very few realistic options for a three-party coalition — four party and five party coalitions seem to be more likely and we haven't really seen that level of complexity for a very long time, so it's very hard to say what might happen."

One likely candidate for a coalition with Benediktsson's Independence is A Bright Future, a centrist movement; another is Revival, a free-market party that was founded earlier this year by disgruntled Independence Party members. One potential sticking point is the country's relationship with the European Union. Iceland is part of the European Economic Area, which has near-free trade with the EU.

The key now is to find stability.

"It's a strong government that we need now," said Benediktsson. "Things are going quite well at the moment, we have strong growth, low unemployment, so the new government has to be able to follow through on that."