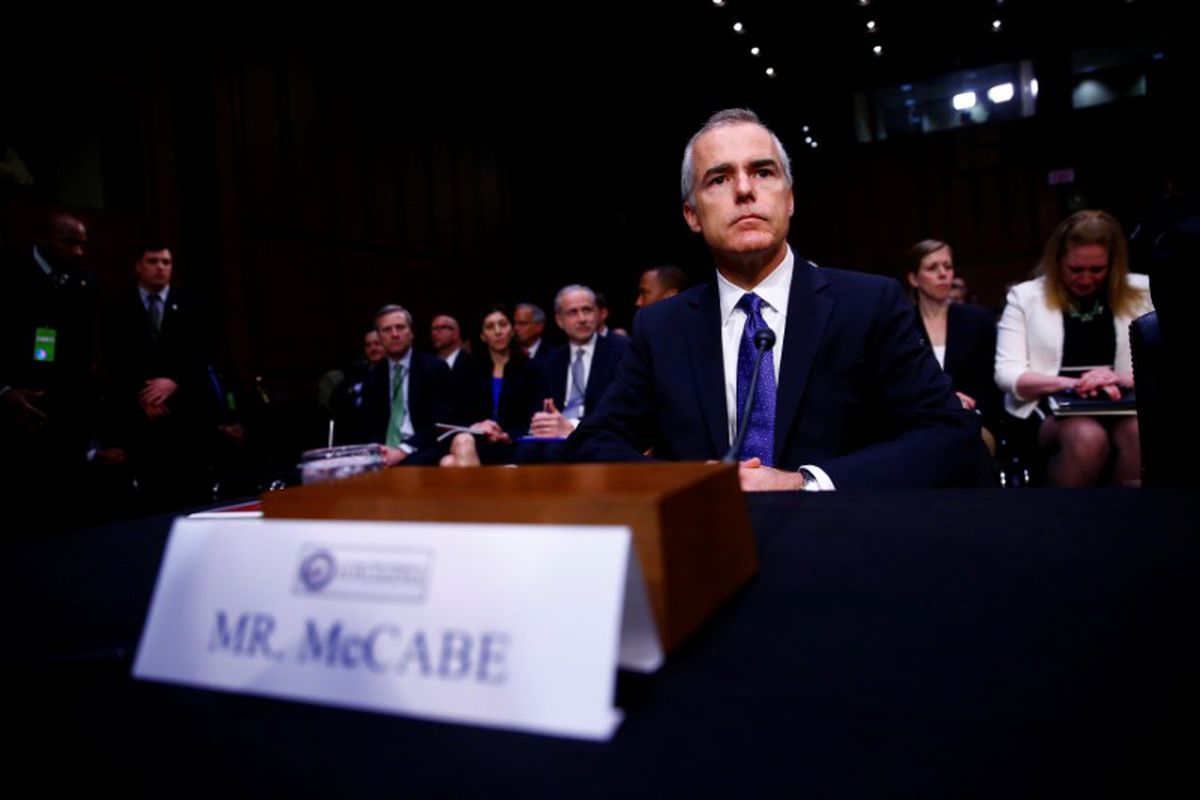 WASHINGTON – President Donald Trump blasted ousted FBI chief James Comey as a "showboat" and "grandstander" on Thursday even as the agency's acting leader contradicted the president's account that the agency had been in turmoil before he fired Comey.

In testimony before the Senate Intelligence Committee, acting FBI director Andrew McCabe promised to tell the panel of any White House meddling into the agency's probe of possible Russian interference in the 2016 election. McCabe also declined to say whether he ever heard Comey tell Trump that the president was not a target of the investigation into possible collusion between Russia and Trump's 2016 presidential campaign.

McCabe testified in place of Comey, who Trump abruptly dismissed as FBI director on Tuesday in an action that has roiled Washington. Democrats have accused the Republican president of trying to foil the FBI's probe into Moscow's actions and many have called for a special prosecutor to look into the Russia matter.

McCabe's testimony contradicted Trump's appraisal of turmoil at the FBI under Comey.

"I can tell you also that Director Comey enjoyed broad support within the FBI and still does to this day," McCabe testified.

"I can tell you that I hold Director Comey in the absolute highest regard. I have the highest respect for his considerable abilities and his integrity," McCabe added. "And it has been the greatest privilege and honor of my professional life to work with him."

Republican Committee Chairman Richard Burr asked McCabe whether he ever heard Comey tell Trump the president was not the subject of investigation. McCabe sidestepped the question, saying he could not comment on an ongoing investigation.

In his letter firing Comey on Tuesday, Trump wrote, "While I greatly appreciate you informing me, on three separate occasions, that I am not under investigation, I nevertheless concur with the judgment of the Department of Justice that you are not able to effectively lead the Bureau."

McCabe said it was not typical practice to tell a person they are not a target of an investigation.

"It is my opinion and belief that the FBI will continue to pursue this investigation vigorously and completely," McCabe said, adding that he saw no "crisis of confidence within the leadership of the FBI."

U.S. intelligence agencies concluded in a January report that Russian President Vladimir Putin ordered an effort to disrupt the election that included hacking into Democratic Party emails and leaking them, with the aim of helping Republican Trump.

Leaders of the U.S. intelligence agencies, including Director of National Intelligence Dan Coats and CIA chief Mike Pompeo, testifying on Thursday said they agreed with that finding. Moscow has denied any such interference and the Trump administration denies allegations of collusion with Russia.

Thursday's hearing was scheduled to address global security threats, but there were frequent questions about Comey and the FBI's Russia probe. Several congressional panels are also investigating Russia's role in the election.

'Get to the bottom of what happened'

The Senate intelligence committee's top Democrat, Mark Warner, said in light of Comey's firing, "It is important to restate the critical importance of protecting the independence and integrity of federal law enforcement."

"And while it's clear to me now more than ever that an independent special counsel must be appointed, make no mistake our committee will get to the bottom of what happened during the 2016 presidential election," Warner said, although he said he was not happy with the pace of the committee's probe.

"The timing of this firing is wrong to anyone with a semblance of ethics," added Democratic Senator Ron Wyden.

Senate Judiciary Committee Chairman Chuck Grassley called on the FBI to publicly confirm whether or not it is probing Trump.

In a statement, Grassley said that Comey had previously briefed him and the panel's top Democrat, Senator Dianne Feinstein, and that the lawmakers "heard nothing that contradicted the president's statement."

McCabe said he has met with Trump this week but that the Russia investigation did not come up, adding that he also has not spoken about the probe with Attorney General Jeff Sessions. White House spokeswoman Sarah Huckabee Sanders said on Wednesday the Russia probe was one of the smallest things the FBI is dealing with, but McCabe testified, "We consider it to be a highly significant investigation." McCabe added that Comey's firing did not force a curtailment of the probe and said the agency has adequate resources to pursue it.

A congressional source said on Wednesday Comey, days before being fired, told lawmakers he had sought more resources for the agency's Russia probe.

The Trump administration has said Comey's firing was unrelated to the Russia investigation.

Former Republican congressman Mike Rogers is being considered as a candidate to replace Comey, a senior White House official said.

Deputy Attorney General Rod Rosenstein, who played an instrumental role in the firing, ventured to Capitol Hill to speak with members of the Senate panel. Asked about media reports that Rosenstein this week had threatened to quit, Burr said that issue was not brought up.