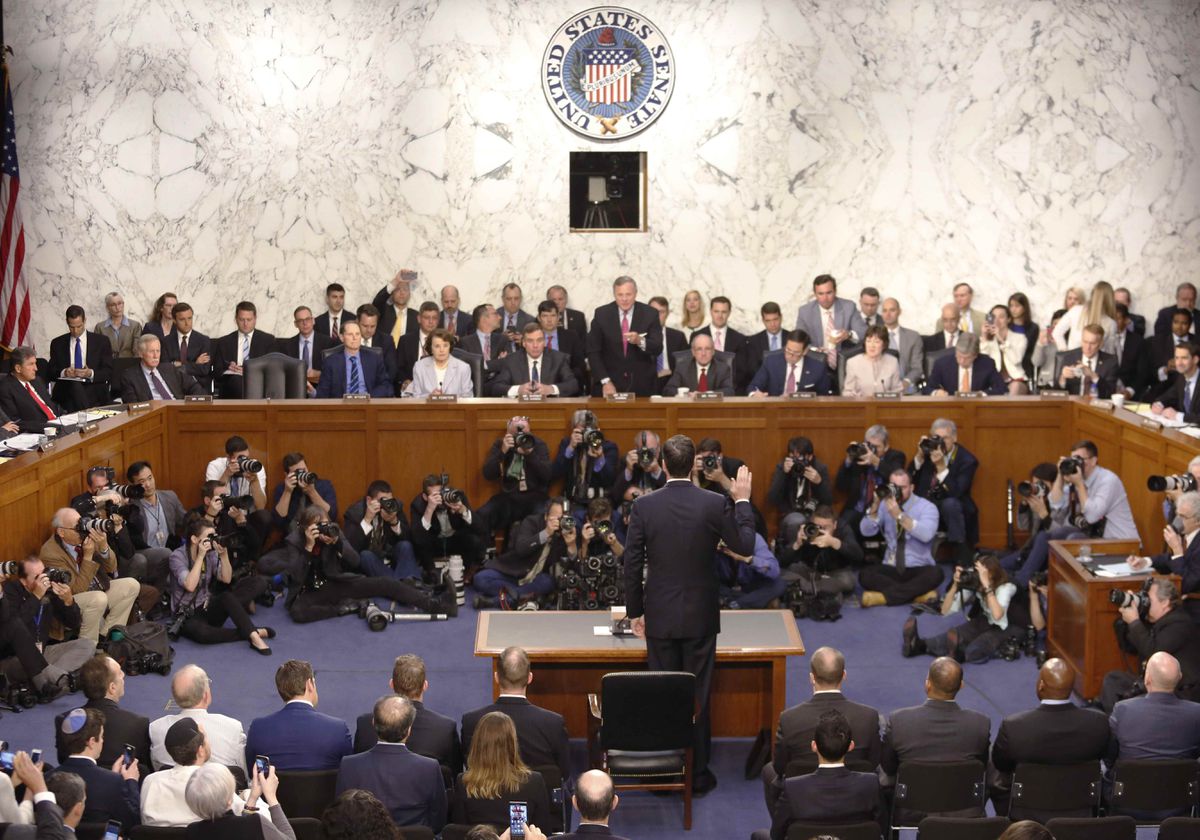 WASHINGTON – To Democrats and many legal experts in both parties, the Senate testimony from fired FBI director James B. Comey is devastating to President Donald Trump – portraying him as a liar who sought to halt the federal investigation into a former top aide and putting him in dire legal peril.

But to Trump, many Republicans and a broad constellation of surrogates and conservative media outlets, the takeaway is much different: exoneration.

"Despite so many false statements and lies, total and complete vindication," the president tweeted early on the morning after Comey's testimony.

That point of view has ricocheted across the conservative media world, both organically and in coordination with a hastily organized rapid-response operation at the Republican National Committee. The result is a parallel narrative – reinforced by the president himself on Twitter and at a Friday news conference – that spun Comey's testimony as a clear victory and, publicly at least, cast aside any potential dangers that may lie ahead.

"There was no there there," said Jay Sekulow, a prominent conservative attorney who is now part of the president's legal team, which is being led by his longtime attorney Marc Kasowitz. "There was no basis upon which an obstruction of justice charge can be raised by what was allegedly said."

"I thought it was a collapse of James Comey," added Sekulow, who is also chief counsel for the American Center for Law & Justice.

The starkly different interpretation of Comey's testimony on the right provides another illustration of the deepening national divide over Trump, whose approval ratings are mired in the mid- to high-30s amid the Russia probe and other controversies and whose agenda has bogged down in Congress with relatively few major accomplishments so far.

Trump's supporters and critics say that his ability to speak directly to his supporters – largely through social media, traditional outlets such as Fox News and loyal conservative online voices such as Breitbart and Infowars – has been a key political advantage for a White House under siege. But many legal experts warn that declaring Trump "vindicated" is premature at best and ignores the real legal and political risks that Trump and his associates face in connection with Comey's firing and the ongoing Russia investigation, which is now under the purview of special counsel Robert S. Mueller III.

The pro-Trump interpretations also do not take into account new questions that Comey's testimony raised about the actions of key members of the administration, including Attorney General Jeff Sessions, Trump's son-in-law and senior adviser Jared Kushner and Chief of Staff Reince Priebus, according to Philip Allen Lacovara, a former U.S. deputy solicitor general in the Justice Department who served as counsel to the Watergate special prosecutors.

"Comey's testimony lays out a case that a prosecutor could regard as sufficient to demonstrate that the president did engage in an obstruction of justice," Lacovara said. "None of that was undermined by the oral testimony that Comey gave."

Even as Comey characterized Trump as a liar in testimony seen by more than 19 million people, Trump's version of events has persisted largely unquestioned in conservative circles. Trump's supporters and Republicans in Washington have moved quickly to defend him based primarily on the narrow argument that he did not violate the law.

On Friday morning, a segment on "Fox & Friends" about the reaction to Comey's testimony bore the headline: "Mainstream Media Misfire." Minutes later, Trump, an avid viewer, sent a Twitter message of praise: "Great reporting by @foxandfriends and so many others. Thank you!"

"Comey gives early Christmas gift to GOP," tweeted conservative radio host Laura Ingraham. "Most Americans see this for what it is: a formerly [important] man mad that he was canned. Spurned."

David Axelrod, a former chief strategist for President Barack Obama, said that Republicans "had a real strategy: 'We have to draw the line at a crime being committed that would force our hands in terms of an impeachable offense.'"

"Yes, Comey did confirm that he told the president that he wasn't, at the time that Comey spoke to him, under investigation," Axelrod added. "But it ignores the fact that what was clear from Comey's testimony . . . is that Trump almost certainly is under investigation now because of what he said to Comey."

In addition to the special counsel probe, the House Oversight Committee is also investigating whether Trump and his associates may have attempted to influence the FBI investigation. Current and former Trump associates including Kushner, onetime campaign manager Paul Manafort, former adviser Carter Page and former national security adviser Michael Flynn are also the focus of the ongoing probes.

And in defending Trump and declaring victory, attorney Kasowitz may have opened his client up to further scrutiny.

"Allowing his client to say that Comey had lied under oath guarantees that the special counsel is going to have to get sworn testimony from Trump on this subject, which creates another avenue of exposure," Lacovara said.

Trump's allies counter that Comey made a number of strategic mistakes that punctured his image as an unassailable G-man. They say he turned the hearing into a glorified employment dispute and admitted to leaking private information in an effort to force the appointment of a special counsel.

"Comey lifted the veil on his motivations," said Tom Fitton, president of the conservative watchdog group Judicial Watch. "The political problem for President Trump previously had been the unwillingness of Republicans to defend him from the lawless efforts to remove him from office.

"Now he may have some more backing from his weak sisters in the Congress," he added.

Among the cast of characters who moved to defend Trump were Republican lawmakers who have been critics in the past, including Sens. John McCain (Ariz.), Marco Rubio (Fla.) and Lindsey O. Graham (S.C.).

"I don't believe the president is under investigation for colluding with Russia, I don't believe there's anything to investigate when it comes to obstruction of justice," Graham said. "What he did was wrong, it was inappropriate, rude and crude, but not a crime."

By way of explanation, Republican lawmakers characterized Trump as inexperienced and perhaps naive – but not criminal.

"It's no secret to anybody that this president is not experienced in the ways of Washington or how these investigations work," Sen. John Cornyn (Texas), a member of the Intelligence and Judiciary committees and the chamber's second-ranking Republican, told reporters. He added later that Trump is "a novice in public office" who was understandably frustrated by Comey's refusal to publicly announce that Trump was not the focus of the FBI's investigation.

Sen. Roy Blunt (Mo.), also a member of Senate GOP leadership, said that Comey's testimony was "probably more helpful than not to the president."

Inside the White House, Trump's aides say they feel a small measure of relief armed with testimony from Comey that they view as validation of Trump's statements that he is not under investigation. They also raised questions about the legality of Comey's efforts to release his memos of meetings with Trump to the media and about the Obama Justice Department's actions in the email case involving former Democratic nominee Hillary Clinton.

"They are more comfortable today than they have been in months," said Barry Bennett, a former Trump campaign adviser. "The base certainly hasn't gone anywhere. They are very suspect of media in general, and they clearly don't have much respect for the left."

During a Friday news conference in the Rose Garden with the Romanian president, Trump jumped at the opportunity when asked about the Comey testimony, glancing down at a piece of paper as he recited his mantra.

"No collusion. No obstruction. He's a leaker," Trump said of Comey. "We're very, very happy and, frankly, James Comey confirmed a lot of what I said, and some of the things he said just weren't true."

In Congress and among some conservative activists, impatience over Trump's stalled agenda is beginning to show – and many increasingly blame the Russia probe and its sprawling effects.

Jenny Beth Martin, the co-founder and president of Tea Party Patriots, said conservatives such as herself increasingly see the ongoing congressional and special counsel investigations as distractions designed to hamper Trump's legislative agenda.

"You can throw out allegations all day every day and can head down all sorts of rabbit holes. But at some point, the focus needs to be back on what's important for all of America," she said.

Even as Comey dominated attention over the past week on Capitol Hill, work continued on the policy changes that groups such as Martin's favor. The GOP-led House passed legislation that would erase most of the financial regulatory overhauls enacted during Obama's presidency, while closed-door talks continued among Senate Republicans about a plan to roll back the Affordable Care Act. Republicans across Capitol Hill also continued preparing for high-stakes talks on a new budget plan and tax restructuring – big-ticket items that GOP leaders would like to complete by the fall.

Democrats, meanwhile, see Republicans' sudden willingness to defend Trump as a purely political strategy to protect a flawed president who can follow through on the party's agenda.

"There's a Faustian bargain that has been struck," Axelrod said. "Whatever size Trump's hand is, he can still hold a pen, and that's all that matters."