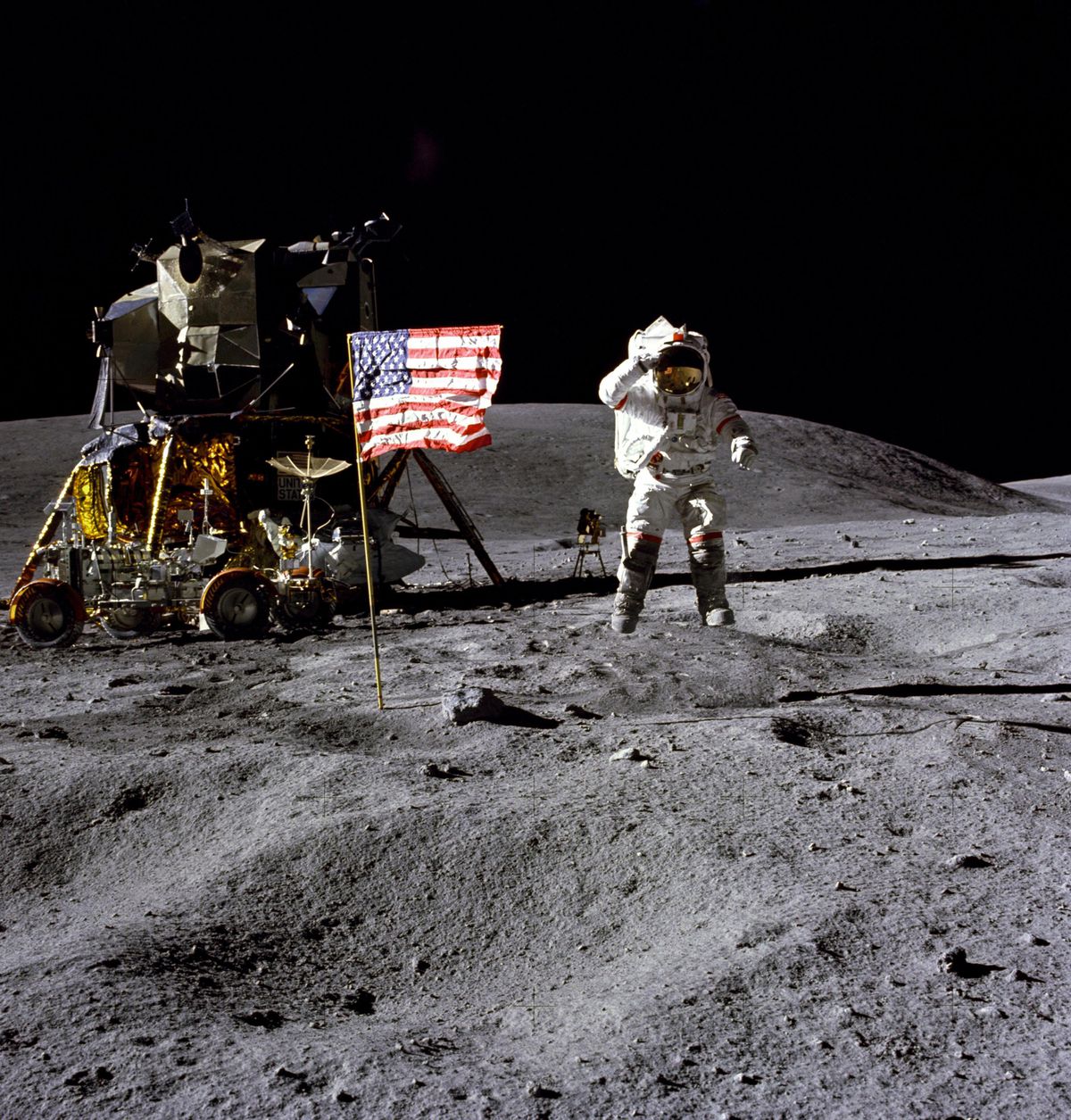 John Young salutes the U.S. flag on the moon during the Apollo 16 mission in April 1972. Young, who went on to command the first shuttle mission in 1981 during a four-decade career at the space agency, died at home in Houston on Jan. 5, 2018. He was 87. (Charles M. Duke Jr./NASA via The New York Times)

John Young salutes the U.S. flag on the moon during the Apollo 16 mission in April 1972. Young, who went on to command the first shuttle mission in 1981 during a four-decade career at the space agency, died at home in Houston on Jan. 5, 2018. He was 87. (Charles M. Duke Jr./NASA via The New York Times)

John W. Young, who walked on the moon, commanded the first space shuttle mission and became the first person to fly in space six times, died Friday at his home in Houston. He was 87.

His death was announced by the acting administrator of NASA, Robert Lightfoot, who said the cause was complications of pneumonia.

Young joined NASA in the early years of manned spaceflight and was still flying, at age 53, in the era of space shuttles. He was the only astronaut to fly in the Gemini, Apollo and shuttle programs. He was also chief of NASA's astronauts office for 13 years and a leading executive at the Johnson Space Center in Houston.

When he was honored by the Smithsonian's Air and Space Museum upon retiring from NASA in December 2004, after 42 years with the agency, Young played down his accomplishments. "Anybody could have done it," he told the Orlando Sentinel. "You've just got to hang in there."

But Robert Crippen, who flew with Young on the first space shuttle flight, called him an inspiration to the astronauts who followed him, remarking, "If they have a hero, that hero is John Young."

In addition to his versatility in flying all manner of spacecraft, Young was considered a meticulous engineer in troubleshooting technical problems during the preparation for his missions and other space flights, and he remained with NASA after many astronauts headed for the business world.

As Crippen put it: "It's rare when an individual comes along that actually personifies his chosen profession, but rare is what John Young is."

After serving as a Navy test pilot, Young joined NASA in 1962 at the outset of the Gemini program, a bridge between the missions of the original Mercury 7 astronauts and the Apollo program, which sent men to the moon.

Young flew twice in Gemini spaceships, commanded the Apollo mission that preceded Neil Armstrong and Buzz Aldrin's landing on the lunar surface and later drove a rover vehicle through the moon's highlands. He closed out his explorations of space by flying on two shuttle missions.

Young had a mischievous side and something of a rebellious streak. He smuggled a corned beef sandwich aboard Gemini 3 to the consternation of NASA officials, who feared that crumbs could have damaged the spacecraft's systems, though that did not happen.

On his flight to the moon, he complained graphically to his fellow crewmen about his flatulence, evidently caused by the potassium-fortified orange juice he was required to drink. He thought he was speaking on a closed radio circuit, but his microphone was open, and all the world heard it.

"He drawled his way through conversation and gave the impression he was still the country boy who grew up in Orlando, Florida, back when it was mostly farmland," Andrew Chaikin wrote in "A Man on the Moon" (1994).

"Some people saw the country-boy bit as an act; it wasn't," Chaikin continued. "It was just John's way of getting the people around him to think a little harder about the problem. Inside Young was an unwavering determination, an overriding sense of responsibility — to the space country, to the program, to his crew — and an almost childlike sense of wonder at the universe."

John Watts Young was born on Sept. 24, 1930, in San Francisco and grew up in Orlando, where his father worked as a civil engineer. He was intrigued by flight as a youngster, building model airplanes, and went on to Georgia Tech, receiving a bachelor's degree in aeronautical engineering in 1952. He entered the Navy after graduating and flew fighters before becoming a test pilot.

When President John F. Kennedy proposed landing a man on the moon in a nationally televised address to a joint session of Congress in May 1961, Young was watching on a small black-and-white television set at the Naval Air Test Center in Florida. He was enthralled by the challenge and joined NASA in September 1962 as one of nine pilots selected for the Gemini program.

In March 1965, Young flew in Gemini 3, the first manned mission of that program, with Virgil Grissom (who was known as Gus), who fired rockets to carry out the first manual change of orbit in a spacecraft.

In July 1966, Young commanded Gemini 10, flying with Michael Collins, in the first dual-rendezvous spaceflight. Their craft docked with an Agena target vehicle while in orbit, then unlocked and came within inches of another Agena, a prelude to the maneuvering that would be required on a mission to the moon.

On his third flight, in May 1969, two months before the first moonwalk, Young was the command module pilot of Apollo 10, orbiting the moon while Thomas Stafford and Eugene Cernan orbited below him in the lunar module, tracking proposed landing sites.

[He may be training for space travel, but Robb Kulin says, 'Alaska is my favorite place on Earth']

While commanding the Apollo 16 mission in April 1972, Young, together with Charles Duke, drove the lunar rover vehicle through the previously unexplored highlands of the moon, scooped up more than 200 pounds of rocks, then returned to the command craft, piloted in orbit by Thomas Mattingly.

Young became chief of NASA's astronaut office in 1974. He retired from the Navy as a captain in 1976, but continued to fly for NASA as a civilian.

In April 1981, Young commanded the Columbia space shuttle, with Crippen as the pilot, in the first flight of a reusable winged spacecraft. They orbited the earth 36 times, then touched down on the dry lake bed at Edwards Air Force Base in California, the first landing of a spacecraft on a runway.

Young's final flight came in fall 1983 when he commanded Columbia in the first launching of the European-built Spacelab laboratory, which was housed in the shuttle's cargo bay. The six-man crew flew for 10 days, carrying out numerous experiments.

For all his service with NASA, Young could be a harsh critic of the agency. In January 1986, the Challenger shuttle blew up 73 seconds after launching, killing its seven astronauts. In March, Young wrote two internal memos asserting that NASA had exposed astronauts to numerous potentially "catastrophic" hazards because of pressure to maintain its launching schedule.

Young remained as the astronauts' chief until 1987, then became special assistant to the director of the Johnson Space Center for engineering, operation and safety. He continued in a supervisory post at the center until retiring.

In May 2000, still listed as an active astronaut though he would make no more space flights, Young said he yearned for NASA to fly to the moon again and envisioned missions beyond it.

"Our ability to live and work on other places in the solar system will end up giving us the science and technology that we need to save the species," he told The Associated Press. "I'm talking about human beings. I'd hate to miss all that fun."