If we ever get to Mars, the beer might not be bad 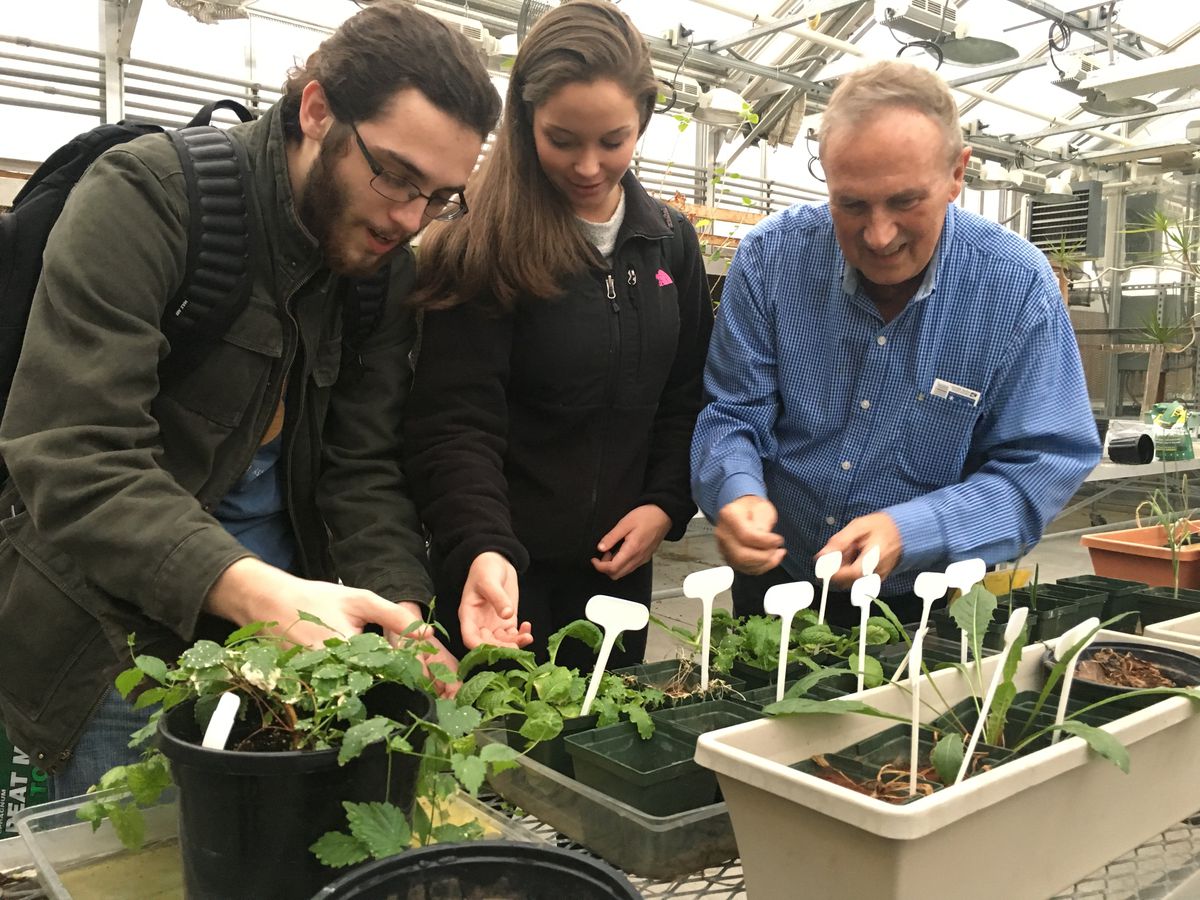 Edward F. Guinan, right, a professor of astronomy and astrophysics, and his students inspect vegetables growing in their “Mars Garden.” The students found that hops, leafy greens, carrots and scallions all could grow in an approximation of Martian dirt. (Villanova University via The New York Times)

Edward F. Guinan, right, a professor of astronomy and astrophysics, and his students inspect vegetables growing in their “Mars Garden.” The students found that hops, leafy greens, carrots and scallions all could grow in an approximation of Martian dirt. (Villanova University via The New York Times)

Here's an interplanetary botany discovery that took college students and not NASA scientists to find: Hops — the flowers used to add a pleasant bitterness to beer — grow well in Martian soil.

"I don't know if it's a practical plant, but it's doing fairly well," said Edward F. Guinan, a professor of astronomy and astrophysics at Villanova University.

Last semester, 25 students took Guinan's class on astrobiology, about the possibility of life elsewhere in the universe.

For the laboratory part of the course, the students became farmers, experimenting to see which crops might grow in Martian soil and feed future travelers there.

"I was trying to come with a project for the students to do, a catchy project that would be fairly easy," Guinan said. "I kept telling them, 'You're on Mars, there's a colony there, and it's your job to feed them. They're all depending on you.'"

[Erosion is revealing surprising amounts of water ice on Mars]

Guinan presented the findings Friday at a meeting of the American Astronomical Society in Washington, D.C.

But let's back up: soil from Mars?

Of course, no one has yet brought back anything from the red planet, but spacecraft like NASA's Phoenix Mars lander have analyzed Martian soil in great detail. Based on those measurements, scientists have come up with a reasonably good reproduction on Earth — crushed basalt from an ancient volcano in the Mojave Desert. It's available for purchase, and Guinan bought 100 pounds.

Martian soil is very dense and dries out quickly — perhaps better for making bricks than growing plants, which have trouble pushing their roots through. That includes potatoes, the savior food for the fictional Mark Watney in "The Martian," the book by Andy Weir and later a movie starring Matt Damon about a NASA astronaut stranded on Mars.

For the most part, the students chose practical, nutritious plants like soy beans and kale in addition to potatoes. Some added herbs like basil and mint so that astronauts could enjoy more flavorful food on the solar system's fourth world.

And one group chose hops.

"Because they're students," Guinan said. "Martian beer." (He vetoed marijuana.)

For the experiments, the students had a small patch of a greenhouse, with a mesh screen reducing the sunlight to mimic Mars' greater distance from the sun.

What did "fabulous" in pure Martian soil was mesclun, a mix of small salad greens, even without fertilizer, Guinan said.

When vermiculite, a mineral often mixed in with heavy and sticky Earth soils, was added to the Martian stuff, almost all the plants thrived. Because astronauts would likely not be hauling vermiculite from Earth but might have cardboard boxes, Guinan also tried mixing cutup cardboard into the Martian soil. That worked too.

[Space colonization is coming and Alaska could be its model]

One group of students hypothesized that coffee grounds could similarly be used as a filler to loosen up the soil. They figured the astronauts would be drinking coffee anyway, and coffee would also be a natural fertilizer.

"We think the coffee has a lot of potential," Johnson said.

Her team's carrots, spinach and scallions sprouted quickly in the mix of coffee grounds and Martian soil, initially growing faster than even plants in a control planter full of Earth potting mix.

Guinan is not the first to try growing plants in Martian soil. Five years ago, Wieger Wamelink, a scientist at Wageningen University and Research in the Netherlands had the same idea, a way to combine his work — ecology research — with his interest in science fiction.

The first round of experiments grew 14 types of plants including rye, tomatoes and carrots in Martian soil, simulated lunar soil and Earth soil. Almost all of the plants germinated, Wamelink and his colleagues reported.

Like Guinan, Wamelink found that mixing organic material into Martian soil greatly improved plant growth. They verified that crops grown in Martian soil were equally nutritious and safe to eat. In 2016, the researchers hosted meals cooked from their research crops for more than 50 people who had supported the work with crowdfunding donations.

Last year, they showed earthworms could live, even reproduce, in Martian soil.

Future experiments might grow bamboo, which could also be useful on Mars.

"Not because we want panda bears over there," Wamelink said. The shoots are edible, and "It's also a good building material," he said.

One aspect that Guinan and Wamelink have not tackled yet is the presence on Mars of perchlorates, a poisonous chemical that causes thyroid problems in people. (For safety, the simulated Mars soil leaves that out.)

It might be possible to rinse out the perchlorates, which are soluble in water. Bacteria that eat perchlorates might also be used to cleanse the soil.