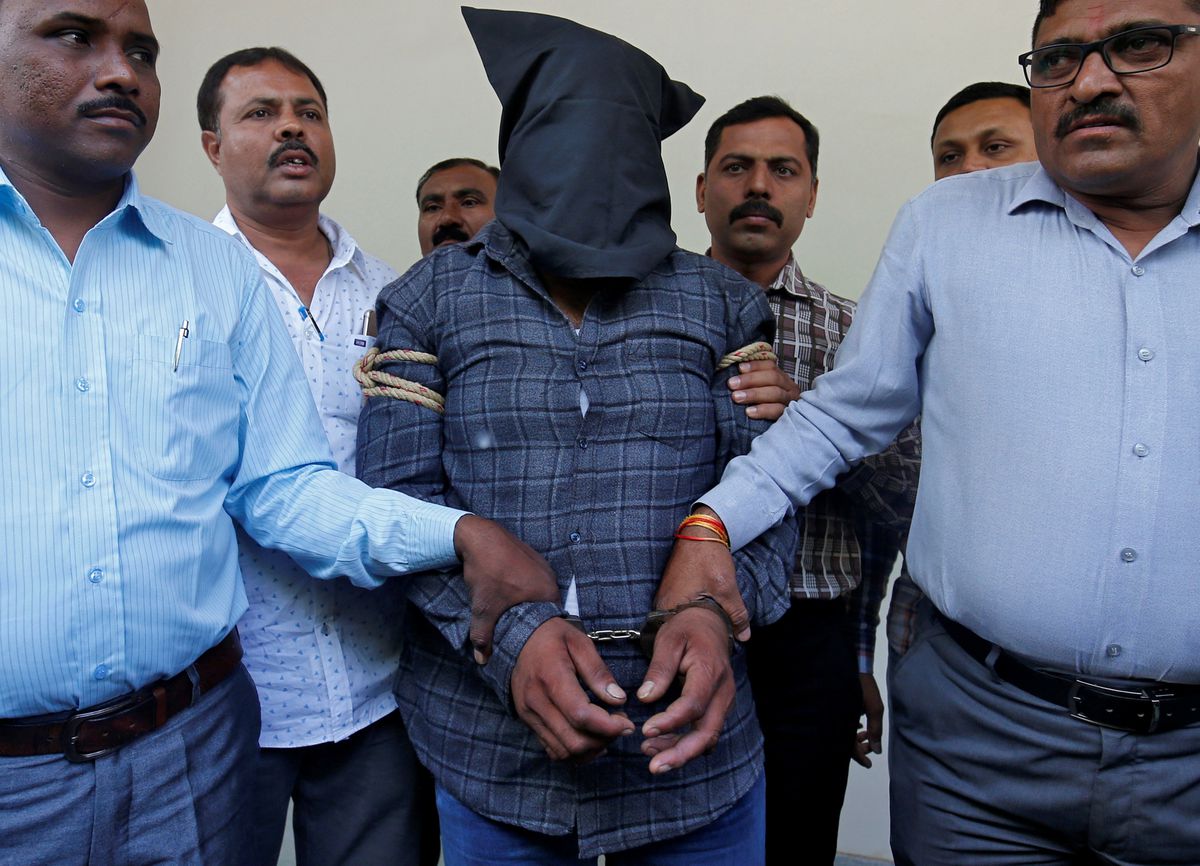 Plainclothes police officers escort Harshsai Gurjar (face covered), who is accused of sexual attack and murder of an 11-year-old girl, to present him before the media at a crime branch office in Ahmedabad, India April 21, 2018. REUTERS/Amit Dave

Plainclothes police officers escort Harshsai Gurjar (face covered), who is accused of sexual attack and murder of an 11-year-old girl, to present him before the media at a crime branch office in Ahmedabad, India April 21, 2018. REUTERS/Amit Dave

NEW DELHI – India's cabinet on Saturday approved the death penalty for rapists of girls below the age of 12, after Prime Minister Narendra Modi held an emergency meeting in response to nationwide outrage in the wake of a series of cases.

The executive order, or ordinance, amends the criminal law to also include more drastic punishment for convicted rapists of girls below the age of 16, government officials said. The order, a copy of which was seen by Reuters, will come into effect once it is signed by India's president.

India launched fast-track courts and a tougher rape law that included the death penalty after a gruesome assault on a young woman shocked the country in 2012, but India's rape epidemic has shown no sign of dying down.

There were 40,000 rapes reported in 2016. The victims were children in 40 percent of those cases. Every day, newspapers carry fresh stories of sexual violence against women.

The latest outpouring of national revulsion came after details emerged of the gang rape of an 8-year-old Muslim girl in a Hindu-dominated area of Jammu and Kashmir state. Local leaders of Modi's Bharatiya Janata Party had appeared to offer support to the men accused, adding to the public disgust.

Protests around the country were also prompted by the arrest of a lawmaker from the BJP last week in connection with the rape of a teenager in Uttar Pradesh, a populous northern state that is governed by the party.

More recently, a sexual attack on an 11-year-old girl was reported in Modi's home state of Gujarat. The post-mortem revealed the girl had been tortured, raped, strangled and smothered.

Modi's failure to speak out soon enough during the latest bout of public anger fueled criticism that his government was not doing enough to protect women.

With a general election due next year, Modi moved swiftly to remedy that negative perception by holding the emergency cabinet meeting as soon as he returned on Saturday morning from an official visit to Europe.

In cases of the rape of a girl below the age of 16, the cabinet increased the minimum punishment to 20 years from 10 years. The penalty for the rape of women was raised to 10 years from seven years.

The document made no mention of the rape of boys or men.

India's judicial system has been unable to keep up with the growing number of rape cases. The cabinet also recommended mandatory completion of rape investigations within two months and advised that trials should also be completed in two months.

"Government has taken serious note of incidents of rape in various parts of the country," the document said. "While expressing deep anguish over such incidents, it has been decided to devise a comprehensive response to deal with the situation."

The cabinet also approved the establishment of more fast-track courts to deal with rape cases, the appointment of more public prosecutors, and ordered police stations to be equipped with special forensic kits, among other steps.

(Reporting by C. K. Nayak in New Delhi and Abhirup Roy in Mumbai)