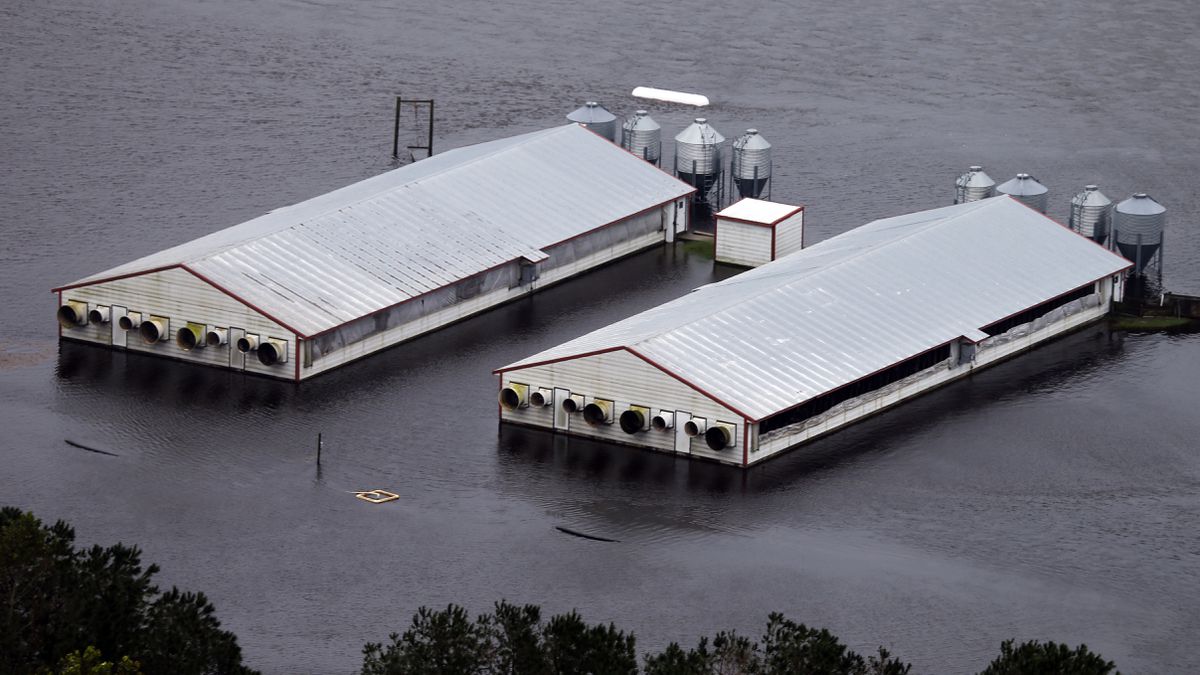 Department of Environmental Quality Secretary Michael Regan said Monday that the earthen dam at one hog lagoon in Duplin County had been breached. There were also seven reports of lagoon levels going over their tops or being inundated in Jones and Pender counties.

Regan said state investigators will visit the sites as conditions allow. The large pits at hog farms hold feces and urine from the animals to be sprayed on nearby fields.

The Associated Press published photos of a hog farm outside Trenton on Sunday with long metal buildings ringed by dark water. Satellite photos of the same farm taken before the storm show the location of a hog waste pit completely submerged under floodwaters in the AP photos.

The N.C. Pork Council, an industry trade group, issued a news release Sunday night denying there had been confirmed spills and questioning the accuracy of AP's reporting. In an email Monday, N.C. Pork Council chief Andy Curliss said the group was drafting an updated statement that was not yet available.

Federal forecasters predicted several rivers would crest at record or near-record levels by Monday, and high water could linger for days.

Duke Energy said the weekend collapse of a coal ash landfill at the L.V. Sutton Power Station near Wilmington, North Carolina, is an "on-going situation," with an unknown amount of potentially contaminated storm water flowing into a nearby lake. At a different power plant near Goldsboro, three old coal ash dumps capped with soil were inundated by the Neuse River.

At the closed Sutton plant, Duke spokeswoman Paige Sheehan said a full assessment of how much ash escaped from the water-slogged landfill can't occur until the rain stops. The company initially estimated Saturday that about 2,000 cubic yards (1,530 cubic meters) of ash were displaced, enough to fill about 180 dump trucks. Sheehan said the estimate could be revised later.

The coal-fired Sutton plant was retired in 2013 and replaced with a new facility that burns natural gas. The company has been excavating millions of tons of leftover ash from old waste pits at the site and removing it to a new lined landfill constructed on the property. The gray ash left behind when coal is burned contains toxic heavy metals, including arsenic, lead and mercury.

Photos from the site provided to AP by Cape Fear River Watch, an environmental advocacy group, show cascades of gray-colored water spilling from at least two breaches at the landfill and flowing toward Sutton Lake, the plant's former cooling pond which is now used for public recreation, including fishing and boating.

Sutton Lake drains into the Cape Fear River. Sheehan said Duke's assessment is that there was minimal chance any contaminants from the spill had reached the river.

Duke's handling of ash waste has faced intense scrutiny since a drainage pipe collapsed under a waste pit at an old plant in Eden in 2014, triggering a massive spill that coated 70 miles (110 kilometers) of the Dan River in gray sludge. The utility later agreed to plead guilty to nine Clean Water Act violations and pay $102 million in fines and restitution for illegally discharging pollution from ash dumps at five North Carolina power plants. It plans to close all its ash dumps by 2029.