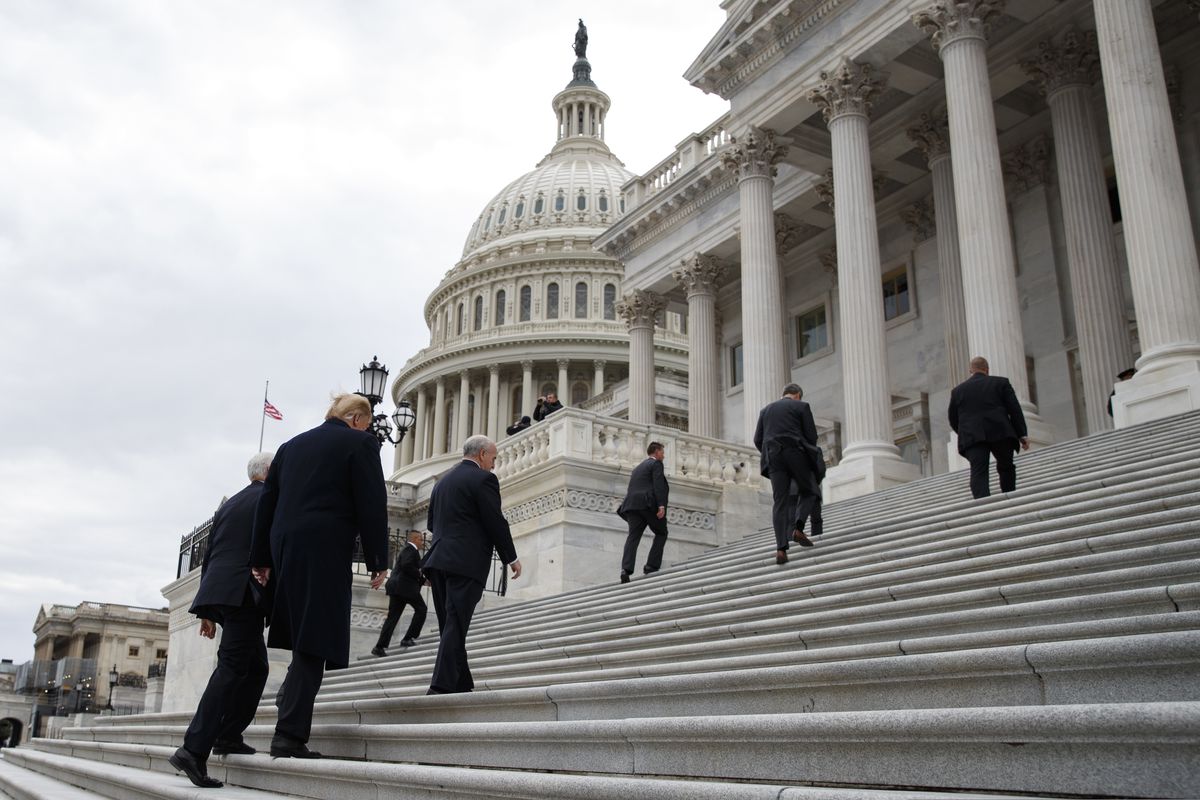 President Donald Trump and Vice President Mike Pence walk up the stairs as they arrive at the U.S. Capitol for a Senate Republican policy lunch, Wednesday, Jan. 9, 2019, in Washington. (AP Photo/ Evan Vucci)

President Donald Trump and Vice President Mike Pence walk up the stairs as they arrive at the U.S. Capitol for a Senate Republican policy lunch, Wednesday, Jan. 9, 2019, in Washington. (AP Photo/ Evan Vucci)

WASHINGTON - Top Democrats say President Donald Trump walked out of a meeting with congressional leaders as talks to end the partial government shutdown remain at an impasse.

Trump was also weighing in on the meeting by tweet, calling it “a total waste of time.”

He tweeted that once Pelosi rejected his long-stalled border wall, he “said bye-bye, nothing else works!”

Trump insisted earlier at the White House he “didn’t want this fight.” But it was his sudden rejection of a bipartisan spending bill late last month that blindsided leaders in Congress, including Republican allies, now seeking a resolution to the shutdown over his signature campaign issue.

Ahead of his visit to Capitol Hill and the White House meeting, Trump renewed his notice that he might declare a national emergency and try to authorize the wall on his own if Congress won’t approve the $5.7 billion he’s asking.

"I think we might work a deal, and if we don't we might go that route," he said.

There’s growing concern about the toll the shutdown is taking on everyday Americans, including disruptions in payments to farmers and trouble for home buyers who are seeking government-backed mortgage loans - “serious stuff,” according to Sen. John Thune, the No. 2 Senate Republican.

Sen. Lisa Murkowski, R-Alaska, urged colleagues to approve spending bills that would reopen various agencies, "so that whether it's the Department of the Interior or it is the IRS, those folks can get back to work. I'd like to see that."

I continue to stress that there is no good reason for a shutdown. The reality is thousands of federal employees & contractors have no paycheck in sight, small businesses that rely on them are suffering & there’s no reason they should be held hostage to a political dispute. pic.twitter.com/VBMNUACU78

Sen. John Cornyn, R-Texas, called the standoff “completely unnecessary and contrived. People expect their government to work. ... This obviously is not working.”

Trump was to get a personal sense of the concern -and perhaps questions about his strategy - from those in his own party at the U.S. Capitol on Wednesday.

Like other Republicans, Sen. Shelley Moore Capito of West Virginia said she wants border security. But she said there was "no way" the shutdown fight would drag on for years as Trump warned last week.

"I think certainly I have expressed more than a few times the frustrations with a government shutdown and how useless it is," Capito said Tuesday. "That pressure is going to build."

There was no sign Trump was backing down from his demand for $5.7 billion for the border wall in exchange for ending the shutdown. Before heading to Capitol Hill he said he had "tremendous Republican support."

Late in the day, Democratic and Republican congressional leaders were to return to the White House to meet with him and renew negotiations that have shown no apparent progress in the past week.

Democrats said Wednesday they will ask Trump during the meeting to accept an earlier bipartisan bill that had money for border security but not the wall. House Speaker Nancy Pelosi warned that the effects of hundreds of thousands of lost paychecks would begin to ripple across the economy.

"The president could end the Trump shutdown and re-open the government today, and he should," Pelosi said.

Tuesday night, speaking to the nation from the Oval Office for the first time, Trump argued that the wall was needed to resolve a security and humanitarian “crisis.” He blamed illegal immigration for what he said was a scourge of drugs and violence in the U.S. and asked: “How much more American blood must we shed before Congress does its job?”

Democrats in response accused Trump appealing to “fear, not facts” and manufacturing a border crisis for political gain.

The White House was trying to shore up GOP support even before Trump spoke. At a private meeting with House Republicans, Vice President Mike Pence cited a C.S. Lewis quote calling courage a virtue, and he said Trump has no plans to retreat.

"That pickup ain't got reverse in it," Pence said, according to people familiar with the conversation.

But a growing number of Republicans are uncomfortable with the toll the partial shutdown is taking, and Trump's response to it. They are particularly concerned about the administration's talk of possibly declaring a national emergency at the border, seeing that as an unprecedented claim on the right of Congress to allocate funding except in the most dire circumstances.

"I prefer that we get this resolved the old-fashioned way," Thune said.

Trump did not mention that idea Tuesday night. A person unauthorized to discuss the situation said additional "creative options" were being considered, including shifting money from other accounts or tapping other executive authorities for the wall.

Trump on Wednesday floated ideas that have been circulated for a broader immigration overhaul. Trump ally Sen. Lindsey Graham has suggested a compromise that would include wall funding as well as protecting some immigrants from deportation.

Trump addressed the nation as the shutdown stretched through its third week, with hundreds of thousands of federal workers going without pay. He claimed the standoff could be resolved in "45 minutes" if Democrats would just negotiate, but previous meetings have led to no agreement.

For now, Trump sees this as winning politics. His re-election campaign sent out fundraising emails and text messages to supporters trying to raise money off his speech. Their goal: a half-million dollars in a day.

"I just addressed the nation on Border Security. Now need you to stand with me," read one message sent out after his remarks.

In their own televised remarks, Pelosi and Senate Minority Leader Chuck Schumer accused Trump of misrepresenting the situation on the border as they urged him to reopen closed government departments and turn loose paychecks for federal workers.

Negotiations on wall funding could proceed in the meantime, they said.

Schumer said Trump "just used the backdrop of the Oval Office to manufacture a crisis, stoke fear and divert attention from the turmoil in his administration."

In his dire address, Trump ticked off a string of statistics and claims to make his case that there is a crisis at the border, but a number of his statements were misleading, such as saying the new trade deal with Mexico would pay for the wall, or suggesting through gruesome examples that immigrants are more likely to commit crimes.

Trump, who has long railed against illegal immigration at the border, has recently seized on humanitarian concerns to argue there is a broader crisis that can only be solved with a wall. But critics say the security risks are overblown and the administration is at least partly to blame for the humanitarian situation.