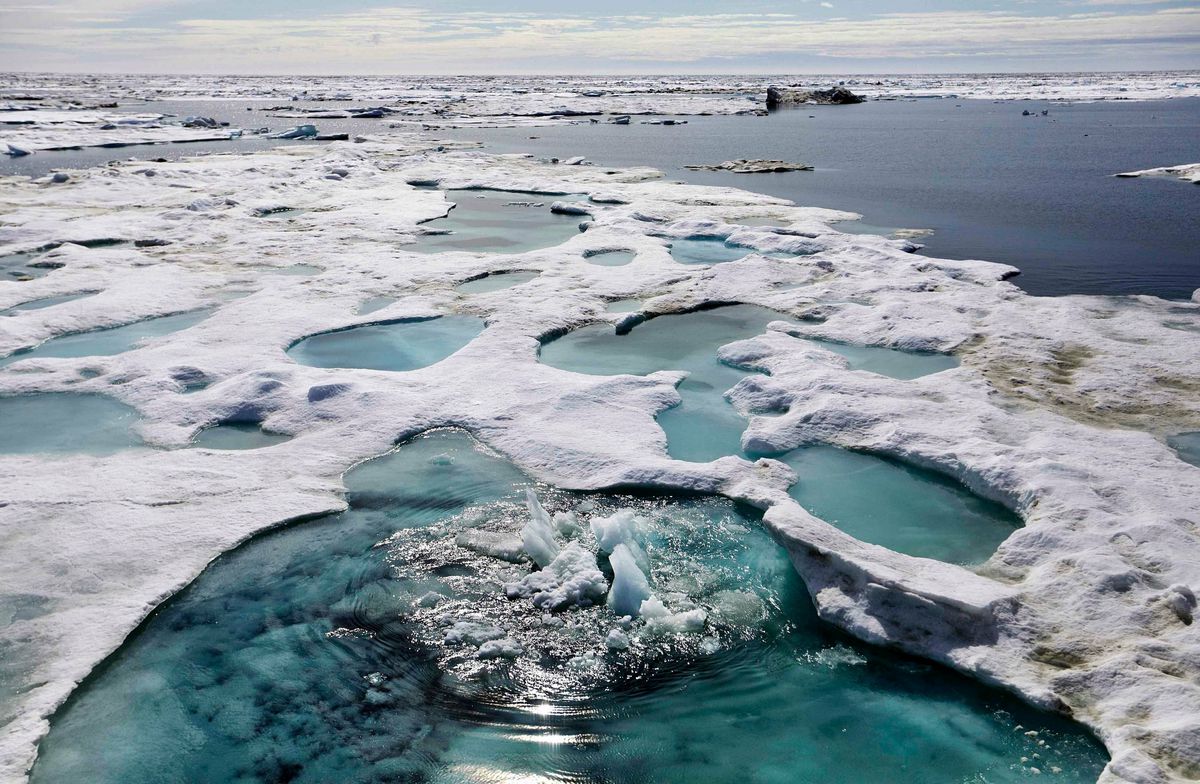 In this July 16, 2017, file photo, ice is broken up by the passing of the Finnish icebreaker MSV Nordica as it sails through the Beaufort Sea off the coast of Alaska. (AP Photo/David Goldman, File)

In this July 16, 2017, file photo, ice is broken up by the passing of the Finnish icebreaker MSV Nordica as it sails through the Beaufort Sea off the coast of Alaska. (AP Photo/David Goldman, File)

WASHINGTON - The Trump administration sought to remove references to climate change from an international statement on Arctic policy that Secretary of State Mike Pompeo is expected to endorse next week, leading to sometimes testy negotiations over how much to emphasize an issue considered a crisis for the region.

The Arctic Council declaration is an affirmation of goals and principles among the eight Arctic nations, which meet every two years. The Trump administration’s position, at least initially, threatened a standoff, in which the United States would not sign off on a statement that included climate discussion and other members would not agree to a version that left it out, according to senior diplomats and others familiar with the discussions.

The administration objected to language that, while nonbinding, could be read as a collective commitment to address the effects of climate change in the Arctic, diplomats said. One official familiar with the preparations for this year's meeting said that at meetings last month, the United States "indicated its resistance to any mention of climate change whatsoever."

Three officials from member states, who described the negotiations on condition of anonymity to discuss sensitive diplomatic discussions, said the U.S. position appears to have softened in recent days.

"There have been challenges in the negotiations with the United States," one of these officials said.

All three said the United States initially wanted no reference to climate change or the 2016 Paris international climate agreement in the joint statement to be issued in Finland.

"At one point they wanted to remove the expression 'climate change' and blocked references of the Paris agreement and other international agreements in the language. But the dialogue has improved during the last couple of days," said the senior official.

Climate change has become a central issue for the organization as warming in the Arctic has accelerated. Scientists say the Arctic is warming about twice as fast as the rest of the planet, with implications for sea levels, weather patterns and more.

[March records for warm weather across Alaska were ‘obliterated’ this year]

Secretary of State Mike Pompeo will travel to northern Finland for the two-day session next week with fellow foreign ministers from Nordic nations, Canada and Russia. The meeting is the first high-level gathering of the Arctic Council since the United States announced in June 2017 its withdrawal in from the 2016 Paris global agreement on reducing carbon emissions.

The State Department officially oversees U.S. participation in the council - which was formed in 1996 to address issues unique to the region, with the exception of how each country uses its military in the Arctic. Its work typically draws little notice in the United States.

The White House, which in February devised a plan to challenge the scientific consensus that the burning of fossil fuels is the leading cause of climate change and poses growing economic and health threats, has largely assumed control of U.S. preparations for the meeting.

Negotiations continued this week, one official said. He predicted the final document will include something "substantive" and "robust" on the impact of climate change in the Arctic, although he was not sure if the phrase 'climate change' itself would be used.

Two officials said they do not expect the document to refer to the Paris agreement, now that the United States is pulling out - an apparent compromise. The other seven Arctic nations are all signatories.

Aleksi Härkönen, a former Finnish ambassador who chairs the group of diplomats from each nation who serve as delegates to the council, said negotiations are still not completed over wording in the final, joint declaration that must be approved unanimously.

Härkönen declined to be specific, but said the remaining differences reflect "different shades of gray."

"We have made good progress," Härkönen said in a phone interview. "There is a willingness on all sides to achieve a result, to be able to get a declaration all can agree on. I sense the willingness to make compromises. I believe this will be the outcome. But we are not there yet."

The Obama administration, particularly former Secretary of State John Kerry, saw the Arctic Council - which includes the United States, Canada, Russia, Finland, Norway, Sweden, Denmark and Iceland - as a vehicle for talking about climate change because of the dramatic pace of events in the region.

The Trump administration has taken the opposite view and is reluctant to highlight the dire situation in the Arctic, said David Balton, a fomer State Department official who was in charge of Arctic policy through 2017.

"It's not so much facts are in dispute, as it is what the Arctic Council in particular ought to be doing about it, and how the document ought to characterize Paris," he said. "It's more about public relations, that the administration should not sign a document that calls for the Council, including the United States, to broadcast to the world just how terrible the situation for climate in the Arctic really is."

Representatives of indigenous Arctic people also participate in council discussions, though they do not vote. They all support making a strong statement on climate change, and at the last biannual meeting, in Alaska, native representatives told then-Secretary of State Rex Tillerson that their livelihoods and culture are at stake.

The council and its agenda are more important for other members, most of which have a national identity intertwined with the region and consider the body the pre-eminent forum for addressing Arctic issues. The United States is a member because of Alaska.

Swedish Foreign Minister Margot Wallström addressed the council's mission during meetings with Pompeo and national security adviser John Bolton in Washington this week. A brief State Department summary of the Pompeo meeting did not mention climate change, nor did a tweet from Bolton that called his session productive.

"Sweden remains steadfast in our work to curb the impact of climate change and its effect on the Arctic, one of the most sensitive areas to climate change," she said in a statement to The Washington Post afterward. "The Arctic Council's work on this issue is crucial and will be discussed during their next meeting."

Pompeo says little about climate change in his role as Trump's top diplomat, although he has said he does not consider it a top-tier threat. Last month, Pompeo said the Paris accord "didn't change a thing" for the better.

"Go look at the countries that are still in the Paris agreement and see what their CO2 emissions were. It's one thing to sign a document; it's another thing to actually change your behavior," Pompeo said.

As a Kansas congressman he made equivocal statements about the validity of scientific assessments of climate change, and called the Obama administration climate agenda "radical."

Pompeo will also visit Greenland on his European trip next week, where he could see dramatic effects of climate change-up close.

Greenland, a sparsely populated island that lies mostly above the Arctic Circle, has lost ice at an accelerating pace in the past several decades. A recent study published in the Proceedings of the National Academy of Sciences estimates that Greenland's glaciers went from dumping about 51 billion tons of ice into the ocean between 1980 to 1990, to 286 billion tons between 2010 and 2018.

"The rapid unraveling of the Arctic continues to transform the global climate system causing sea level to rise, permafrost to thaw and sea ice and the planet's reflectivity to disappear," said Rafe Pomerance, chair of the conservation advocacy network Arctic 21 and a senior fellow at Woods Hole Research Center.

"It is the central issue for the Arctic Council to address. The joint statement of ministers of the Arctic Council must reflect the urgency of Arctic decline and the commitment of governments to act with absolute urgency to respond," Pomerance said. "The fate of Greenland is the fate of Miami."

The last Arctic Council ministers’ meeting was held in May, 2017, in Fairbanks, less than four months into the new administration.

Tillerson asked for small changes in the text of the 2017 statement, which called climate change a pressing issue in the Arctic and took note of the Paris agreement without endorsing it.

The joint declaration stressed "the need for global action to reduce both long-lived greenhouse gases and short-lived climate pollutants."

Three weeks later, in June, Trump announced that the United States would pull out of the Paris agreement. Doing so fulfills a campaign pledge from 2016, when Trump promised to "bring back coal" and told working-class supporters that international agreements such as Paris hurt U.S. jobs and competitiveness.

Two years on, relatively moderate senior national security aides such as Tillerson are mostly gone, and Trump's antagonism to climate science appears to have hardened.

He was incensed by a recent assessment released by more than a dozen federal agencies showing climate effects are "intensifying across the country" and that only aggressive action will avoid "substantial damages" in the future.

In response, the White House began planning for an internal working group to counter the scientific consensus that climate change represents a major threat to the United States and the globe.

Trump, a longtime climate skeptic, has said that "a lot of people like myself, we have very high levels of intelligence but we're not necessarily such believers."

As recently as October, he said in interviews that changes to the climate are likely to reverse at some point.

“Nobody really knows, and you have scientists on both sides of the issue,” he told the Associated Press. “And I agree the climate changes, but it goes back and forth, back and forth. So we’ll see.”