Gray whales are starving to death in the Pacific, and scientists want to know why 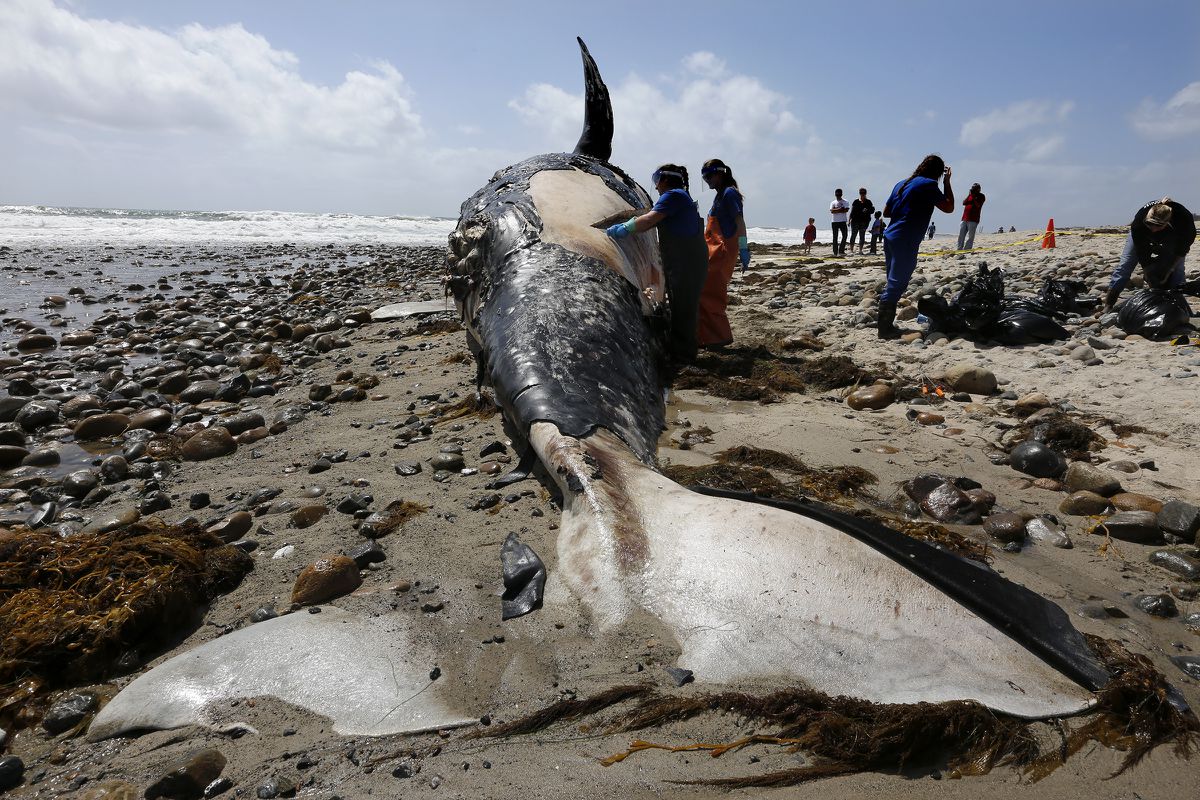 LOS ANGELES -- From Baja California to Puget Sound, scientists are seeing signs that gray whales are in distress. And they have no idea why.

Thirty-one dead gray whales have been spotted along the West Coast since January, the most for this time of year since 2000, when 86 whales died. Dozens more have shown visible signs of malnourishment, and sightings of mother-calf pairs are down sharply.

The gray whale death toll will probably climb through May as the animals continue their annual migration from their warm breeding lagoons in Mexico to their icy feeding grounds in the Arctic, said Justin Greenman, the assistant coordinator of stranded marine mammal response in California for the National Oceanic and Atmospheric Administration.

Experts said that, with about 27,000 gray whales thriving around the world, this year's deaths probably don't present a serious threat to the species. But the casualties can't be ignored, either.

"It's not like we're ringing the alarm bell that this population is threatened or at risk," said John Calambokidis, a biologist and co-founder of Cascadia Research who tracks gray whales in Washington state. "As a researcher, I feel that you want to at least understand what is going on."

So far, scientists know little more than what they can see. They've documented 21 dead whales that have turned up in Long Beach, Los Angeles, San Francisco Bay and elsewhere on California shores. Most of them had not yet reached adulthood and looked like they might have starved to death.

Frances Gulland, a research associate at the University of California, Davis School of Veterinary Medicine, estimates that gray whale deaths could hit 60 or 70 by the end of the season.

"If this continues at this pace through May, we would be alarmed," she said.

In a typical year, scientists at the Marine Mammal Center in Sausalito see two or three dead gray whales. So far this year, they've counted seven, according to Dr. Padraig Duignan, the center's chief pathologist.

Duignan performed necropsies on all of them and determined that four had died of malnutrition.

"Their skeleton seems to stick out more and more," he said.

Emaciated whales are also turning up with greater frequency along the West Coast. These whales are more angular in appearance, and have less muscle mass behind their heads.

Steven Swartz, a marine scientist who studies gray whales in Baja California's San Ignacio Lagoon, said 23 percent of the whales without calves his team has observed this year were skinny. That percentage is more than three times higher than usual.

And then there's the missing calves.

In San Ignacio Lagoon, researchers typically see at least 75 mother-calf pairs each year. This year, they've seen only about 40, Swartz said, though none of them appeared to be unusually thin. Calf sightings typically peak in March and early April.

Off the coast of Los Angeles, observers working with the American Cetacean Society have counted 31 gray whale calves migrating northward since Dec. 1, said marine biologist Alisa Schulman-Janiger. Over the past decade, the number of northbound calves seen by this time of year has ranged from 28 to 164.

Giving birth requires lots of energy and blubber, and thin whales are in "no condition to be nurturing pregnancy or a calf," she said.

Scientists said they suspect the gray whales are malnourished because they didn’t eat enough in the North Pacific and Arctic last summer -- a time typically spent packing on as many calories as possible and building up reserves for their journey to Baja California and back.

But it's too soon to pinpoint the root causes, or to know whether it's the beginning of a more permanent trend, said Elliott Hazen, a research ecologist with NOAA's Southwest Fisheries Science Center in Monterey, Calif.

Researchers can't even tell if it's a problem of supply or demand.

“Whether it’s not enough prey, too many whales, issues with the habitat -- that is what we are currently investigating,” Greenman said.

Adding to the mystery is the fact that other whale species do not seem to be affected, he added.

Researchers at NOAA's Alaska Fisheries Science Center plan to study when and where gray whales feed in the Arctic to help them understand whether prey has become more scarce. NOAA researchers on the West Coast are currently surveying the number of calves migrating north, and in the fall they intend to count the number of gray whales that migrate south, including calves.

Scientists also have much to learn about the small crustaceans and other animals gray whales rely on for food. For instance, they think declines in Arctic sea ice or other ecological changes could be making prey more scarce.

In 2013, researchers spotted an area of warm water off the Gulf of Alaska, and that might be part of the problem. “That warm water layer -- called ‘the blob’ or marine heat wave _ had a number of ecosystem effects we’re still trying to disentangle,” Hazen said.

Other factors, like illness, can also prevent whales from eating as much as they should. "That's a mystery that's still being unraveled," he said.

And the sooner, the better.

“We are concerned because whales are an indicator species for the health of the ocean,” Duignan said. “We use them to tell us what’s happening out there.”