‘A betrayal’: Inside Pelosi, Schumer’s rift on border bill 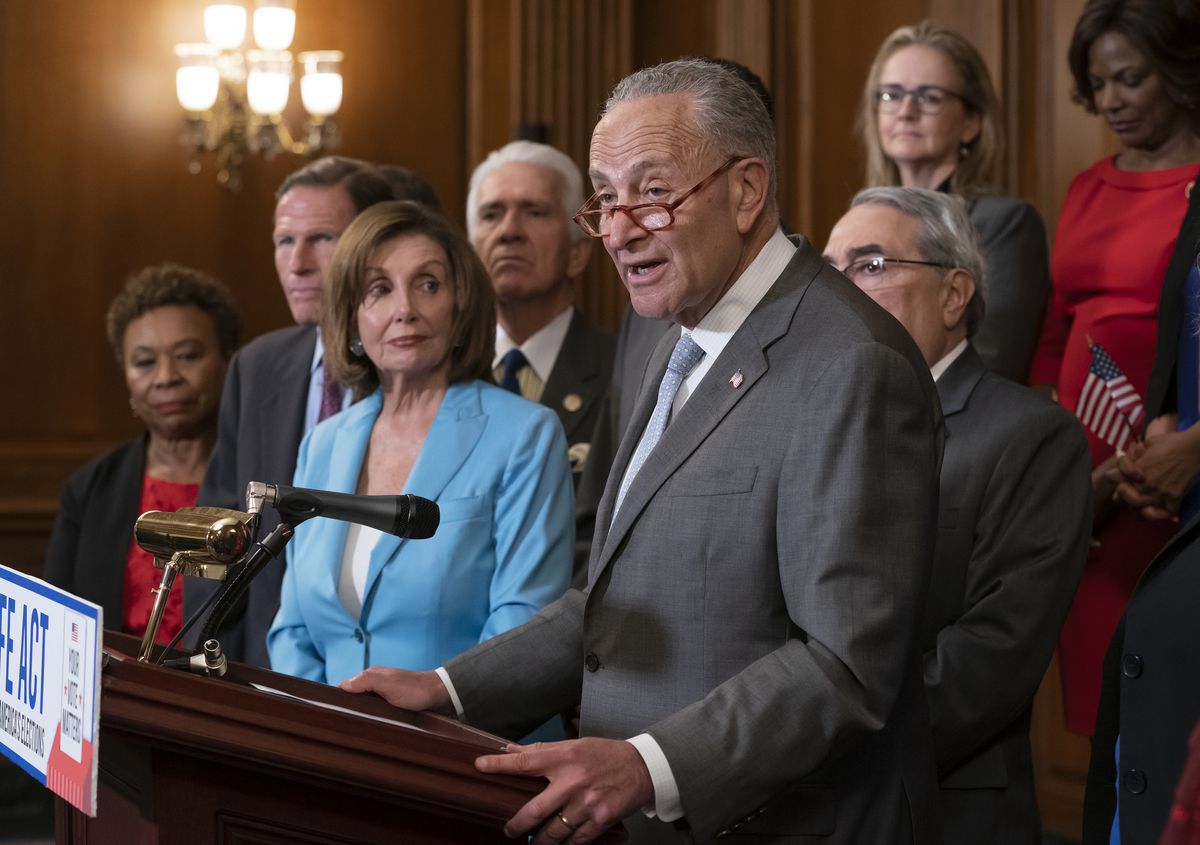 Speaker of the House Nancy Pelosi, D-Calif., left, listens to Senate Minority Leader Chuck Schumer, D-N.Y., at an event before a House vote on the SAFE Act (Securing America's Federal Elections Act) which aims to protect the integrity of elections from outside interference, at the Capitol in Washington, Wednesday, June 26, 2019. (AP Photo/J. Scott Applewhite)

Speaker of the House Nancy Pelosi, D-Calif., left, listens to Senate Minority Leader Chuck Schumer, D-N.Y., at an event before a House vote on the SAFE Act (Securing America's Federal Elections Act) which aims to protect the integrity of elections from outside interference, at the Capitol in Washington, Wednesday, June 26, 2019. (AP Photo/J. Scott Applewhite)

WASHINGTON - House Speaker Nancy Pelosi thought she had a deal this week with her longtime ally, Senate Minority Leader Chuck Schumer: She would ensure passage of a more-liberal border funding bill in the House, and he would back her up by convincing Democratic senators to fight for it.

Instead, Pelosi, D-Calif., told her colleagues in a private meeting Thursday, she was blindsided. Nearly all Senate Democrats voted for a Republican-backed bill that kneecapped the House and marked the most embarrassing defeat for Pelosi in the six months since Democrats took over the chamber.

"Schumer destroyed all our leverage on Wednesday by not being able to hold his people," said a senior House Democratic aide.

Schumer, D-N.Y., meanwhile, believed Pelosi failed to deliver on a deal of her own. After House moderates revolted Thursday, Democrats had to discard a plan to send the bill back to the Senate before an end-of-month deadline.

"They're blaming everyone but themselves," said a senior Senate Democratic aide.

The breakdown between Pelosi and Schumer revealed the extent of the raw divisions among congressional Democrats, and raises the possibility of more skirmishes to come as Congress barrels toward funding and debt ceiling deadlines this fall. Democrats in both chambers agree they have to be in strategic lockstep to have any hope of besting President Donald Trump and Senate Majority Leader Mitch McConnell, R-Ky.

The sudden, bitter dispute between the two most powerful Democrats in the country is particularly remarkable given their long history of cooperation - standing arm-in-arm through some of the most partisan moments in Trump's presidency, including the 35-day partial government shutdown.

This account of the falling-out between Pelosi and Schumer is based on interviews with 18 Democratic lawmakers and aides, some of whom requested anonymity to candidly describe internal discussions in the weeks that led up to Thursday's vote.

"The Senate Democrats did us a huge disservice," said Rep. Pramila Jayapal, D-Wash., co-chair of the Congressional Progressive Caucus. "The benefit to having one chamber controlled by Democrats is you have people who can fight and win. But that requires the people in the minority chamber to also fight, even if they lose."

But Jim Manley, who was communications director for former Senate majority leader Harry Reid, said, "I don't quite understand what the House folks were hoping for here . . . They should have acted on this bill weeks ago."

"These things happen," Manley added. "The tension comes from the difference in the rules. . . . The House also has always had a much more diverse caucus than the Senate, and that makes dealing with the House from the perspective of the Senate leader much more difficult."

The whole mess could have been avoided, according to multiple Democratic aides on both sides of the Capitol. The $4.6 billion emergency spending bill for the humanitarian crisis on the U.S.-Mexico border will provide extra money for agencies overwhelmed by the influx of Central American migrants at the Southern border.

Many lawmakers favored attaching the border funding to a must-pass disaster aid bill that cleared Congress earlier this month. But members of the progressive group and the Congressional Hispanic Caucus, another group closely engaged on border issues, were wary of backing any hastily negotiated deal.

That left the border bill adrift and handed more control to McConnell, who could determine when and how the legislation was considered in the Senate. And as June wore on and the border crisis deepened, House lawmakers withdrew as they negotiated among themselves. That was, in part, due the two caucuses pushing fiercely for tighter strings on any border money.

According to the senior House aide, Jayapal in particular made demands in several meetings that slowed progress and ended up "fanning the flames" of many Democrats. Jayapal's office disputed this assessment.

As talks languished, McConnell announced in mid-June that he would put a border bill on the Senate floor before the July recess. Senate Democrats decided they had a choice: negotiate or be forced to approve GOP legislation.

They chose the former, and two of the longest-serving members of Congress, Sens. Richard Shelby, R-Ala., and Patrick Leahy, D-Vt., cut a $4.6 billion deal whose outlines were sketched out during a joint trip the two senior appropriators made to the Paris Air Show.

Compared to a White House proposal, the compromise bill was viewed as a solid victory by most Senate Democrats. The bill made sure migrants would receive humanitarian aid while having no new funding for migrant detention beds; had a strict prohibition on using the funding for a border wall or to bulk up immigration enforcement; and established new standards for facilities while also delivering funding for immigration judges and $30 million in grants to nonprofits caring for migrants.

The deal had Schumer's blessing, and it passed the Senate Appropriations Committee on June 19 on an overwhelming 30-1 vote. Only Sen. Jeff Merkley, D-Ore., a staunchly liberal critic of the Trump administration, opposed it.

"I think he was very antsy and wanted to go and was not willing for Pelosi to work through her internal caucus issues," a second House Democratic aide said about Schumer. "It wasn't that we weren't interested, I think that we had boxes we needed to check."

Finally, on June 20, House negotiators had a border bill they thought they could convince Democrats in their chamber to pass. Appropriations Committee Chairwoman Nita Lowey, D-N.Y., presented the legislation to the Hispanic Caucus and filed it the next day. It eliminated funding for Immigrations and Customs Enforcement back pay as well as for Defense Department border operations, and it further tightened the administration's ability to shift money around.

Meanwhile, new reports of poor conditions for migrant children herded inside Customs and Border Protection facilities further increased pressure on Democrats - and they pressed for even more changes, ensuring that migrants were subject to specific standards of care. Jayapal and progressives worked through the following weekend to secure changes from appropriators.

McConnell, meanwhile, made clear the Senate was only days away from voting on his chamber's bipartisan bill, and Pelosi and Schumer started discussing the endgame.

According to House officials, Schumer encouraged Pelosi to pass the more-liberal bill in her chamber on Tuesday, the day before the Senate border vote, to keep Schumer's own members from backing the Senate immigration deal. The idea, the officials said, was to force McConnell to make more concessions to Democrats, and Pelosi proceeded to spend her Tuesday muscling the bill through the House - personally convincing liberals who still wanted more provisions that this was their only shot to improve the Senate bill.

Throughout, she cast the fight for the House provisions in lofty terms, calling their adoption a "moral imperative" and denigrating the Senate bill as the "path of least resistance."

"I think she shared a lot of the frustration and disappointment of the progressives," said Rep. Ro Khanna, D-Calif., a liberal ally of Pelosi's. "I think she is as emotional and horrified at what's going on the border."

But at the same time, Pelosi, Lowey and House Majority Leader Steny Hoyer, D-Md., were also telegraphing to their members that the Senate bill would ultimately be acceptable.

"The Senate has a good bill; our bill is much better," Pelosi told her members at a Tuesday caucus meeting. Said Hoyer to reporters the same day, "We think it's not as good as our bill but not a bad bill."

On Wednesday, Schumer, Pelosi and Lowey met before attending a joint news conference on election security, shortly after Pelosi ended a phone call with Trump, who pushed her to accept the Senate bill. The three agreed on a strategy of sending the bill back to the Senate in hopes of forcing a quick negotiation, according to an aide familiar with the exchange.

Those mixed messages, and the bipartisan Senate committee vote, sent the message to Republicans that they had little reason to negotiate further. McConnell had another card to play as well: The presidential debates Wednesday and Thursday took seven Democratic senators away from Washington. When time came to vote on the House version of the border bill, Democrats could only muster 38 votes - short of what they would need to block passage of the Senate bill.

When it came time to vote on the Senate version, only six Democrats withheld their votes. The rest were absent or voted for it - including Schumer.

Pelosi and those in her leadership circle were shocked. To them, Schumer had given McConnell a nuclear weapon - the ability to brag that his legislation had overwhelming bipartisan support and should therefore pass the House.

The next day, Pelosi walked into the two-hour-long leadership meeting saying Schumer couldn't keep his members in line. One senior Democratic aide called it "a betrayal"; another lawmaker called it "a broken deal."

But to those in Schumer's orbit, the Wednesday bipartisan Senate vote should not have come as a surprise. In their view, the House had gone AWOL on border negotiations for weeks and should have known the depth of Democratic support for the bill following the 30-1 committee vote.

In addition, according to Senate officials familiar with the talks, neither Pelosi or any other House Democrat at any point explicitly asked Senate Democrats to block the Senate version of the bill. The real leverage point, they believed, would come after the House sent back an amended Senate bill on Thursday - forcing a negotiation with Republicans.

Instead, Democratic centrists in the House were fortified by the overwhelming Senate vote blocked that strategy, touching off an intense round of finger-pointing.

During one private meeting this week, some top Democrats mocked Schumer for speaking on the Senate floor Wednesday alongside a horrifying picture of a drowned migrant father and daughter while appearing at the same to be undermining the House's efforts to toughen the Senate bill.

Others whispered that Senate Democrats were "smelling the jet fumes" of the July 4 holiday recess - or simply didn't want to complicate the schedules of their colleagues running for president who needed to attend the debate in Miami on Wednesday and Thursday.

In a statement Friday, Pelosi spokesman Drew Hammill said "the Speaker's focus has always been on Mitch McConnell. He shortchanged the children when he said 'get lost' to the House."

"Senate and House Democrats are united in realizing Mitch McConnell is standing in the way of doing so much good for America, including doing even more for the children at the border," said Schumer spokesman Justin Goodman.

Neither spokesman would address questions about the other leader.