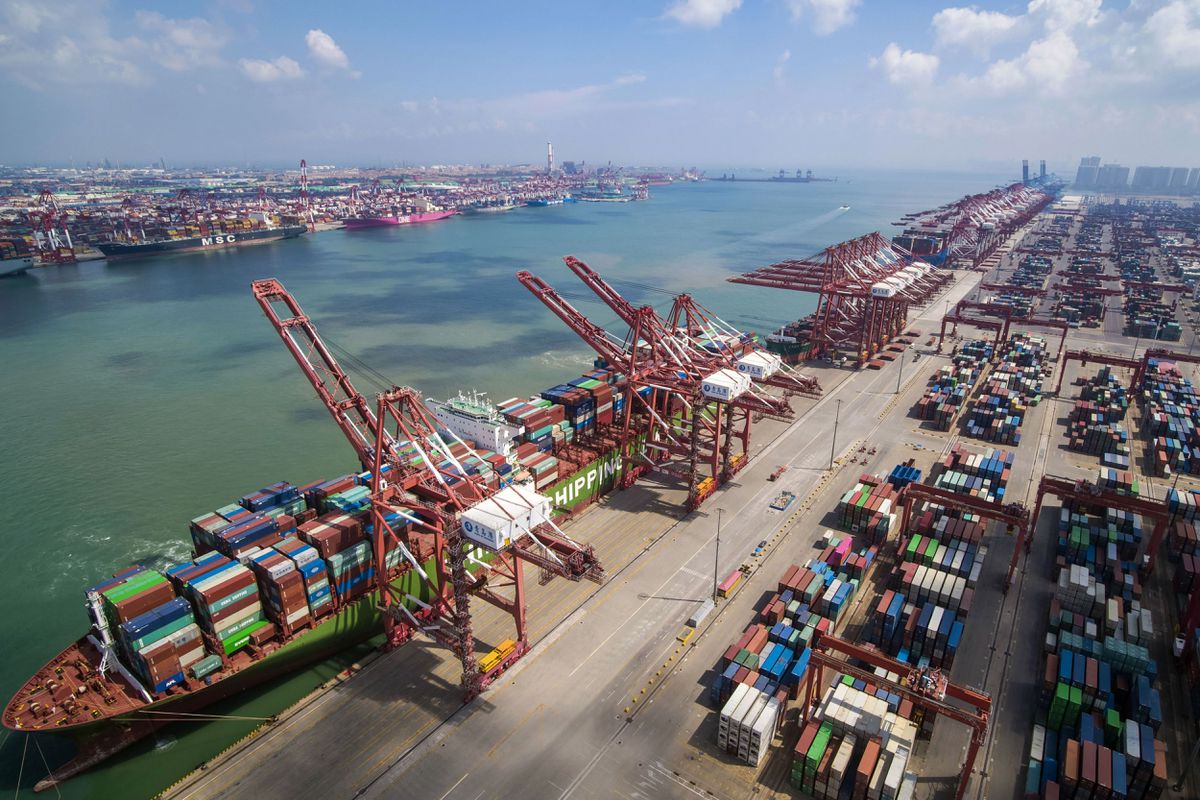 A container ship is docked a port in Qingdao in eastern China's Shandong province. (Chinatopix via AP)

A container ship is docked a port in Qingdao in eastern China's Shandong province. (Chinatopix via AP)

The casualty list from the U.S.-China trade war will include American consumers on Sunday when President Donald Trump’s next round of tariffs on Chinese products takes effect, capping a month of contradictory policy announcements and second thoughts.

"This is the first time U.S. consumers will see the costs quite directly, right as we head into the busiest shopping time of the year," said Edward Alden, an economics professor at Western Washington University.

Even as he braces for potential consumer irritation over higher prices, the president on Friday accused business executives who oppose his tariff strategy of blaming him for their own failures.

Leaving the White House for the presidential retreat at Camp David, Trump said poorly performing companies were using tariffs as an excuse. "Badly run and weak companies are smartly blaming these small Tariffs instead of themselves for bad management...and who can really blame them for doing that? Excuses!" he tweeted earlier in the day.

The president also told reporters that "13% of companies are going to be leaving China," an apparent reference to a survey by the U.S.-China Business Council, which found that 87% of companies operating in the Chinese market plan to stay put despite trade tensions.

Only 3% of the 220 companies surveyed said they would relocate to the United States while 17% said they had reduced or halted planned investment in China.

For more than a year, as the world's two largest economies plunged into a worsening commercial conflict, the president tried to insulate voters from the effects of his import taxes. His first import taxes last year were aimed at what are called intermediate goods, machinery and components that companies use to make their final products.

Major business groups, notably including the U.S. Chamber of Commerce, complained that the tariffs were hurting their bottom lines. But hoping for an early end to the trade war, many companies absorbed the costs in the form of thinner profits or leaned on their Chinese suppliers to share the burden.

On Sunday, back-to-school shoppers will join the ranks of those feeling the tariffs' pinch as imported goods such as musical instruments, contact lenses and tools are hit with the new levy.

The president announced Aug. 1 that he would target $300 billion of Chinese goods with a 10% tariff on Sept. 1. After an outcry from retailers worried about a chilling effect on holiday season sales, he opted to split the action into two parts, with a second round taking effect on Dec. 15.

But after the Chinese retaliated by increasing their own levies on about $75 billion worth of American products, the president suddenly doubled down. He increased to 15% the planned 10% levy and announced a separate increase to 30% from 25% on an earlier $250 billion of Chinese goods, to take effect Oct. 1.

If he proceeds with all of these planned actions, nearly 97% of Chinese goods will be subject to taxes by mid-December, according to economist Chad Bown of the Peterson Institute for International Economics.

In implementing the new fees, the president brushed aside pleas from 160 business groups that wrote the White House this week asking him to hold off. The new tariffs "come at the worst possible time, right in the middle of the busy holiday shipping period," said the letter from the Americans for Free Trade coalition.

Thomas Donohue, the chief executive of the U.S. Chamber of Commerce, publicly called for Trump to halt the planned increase and instead intensify his negotiating push for a deal with Chinese President Xi Jinping.

The mounting business and farm group opposition threatens to become a political liability for the president with the 2020 election just 14 months away.

"They were willing to give the administration time to see if its tactics could force long-needed changes to China's practices," said Alden, a senior fellow at the Council on Foreign Relations. "But he has failed so far, and the trade war has now devolved into a real tit-for-tat with no end in sight. So both business and farm groups are becoming much more vocal in demanding that the administration change course."

Meanwhile, no date has been announced for further U.S.-Chinese negotiations. After being on the verge in May of what the president described as an "epic" trade deal, the two sides are now far apart.

Trump wants China to sharply increase its purchases of American products and to make sweeping structural changes in its state-led economic model.

“We’ve largely been in a holding pattern since May on the structural issues that are critical to resolving this matter,” said Clete Willems, a former top White House trade official who is now a partner with Akin Gump.