Bolton out as national security adviser after repeated clashes with Trump 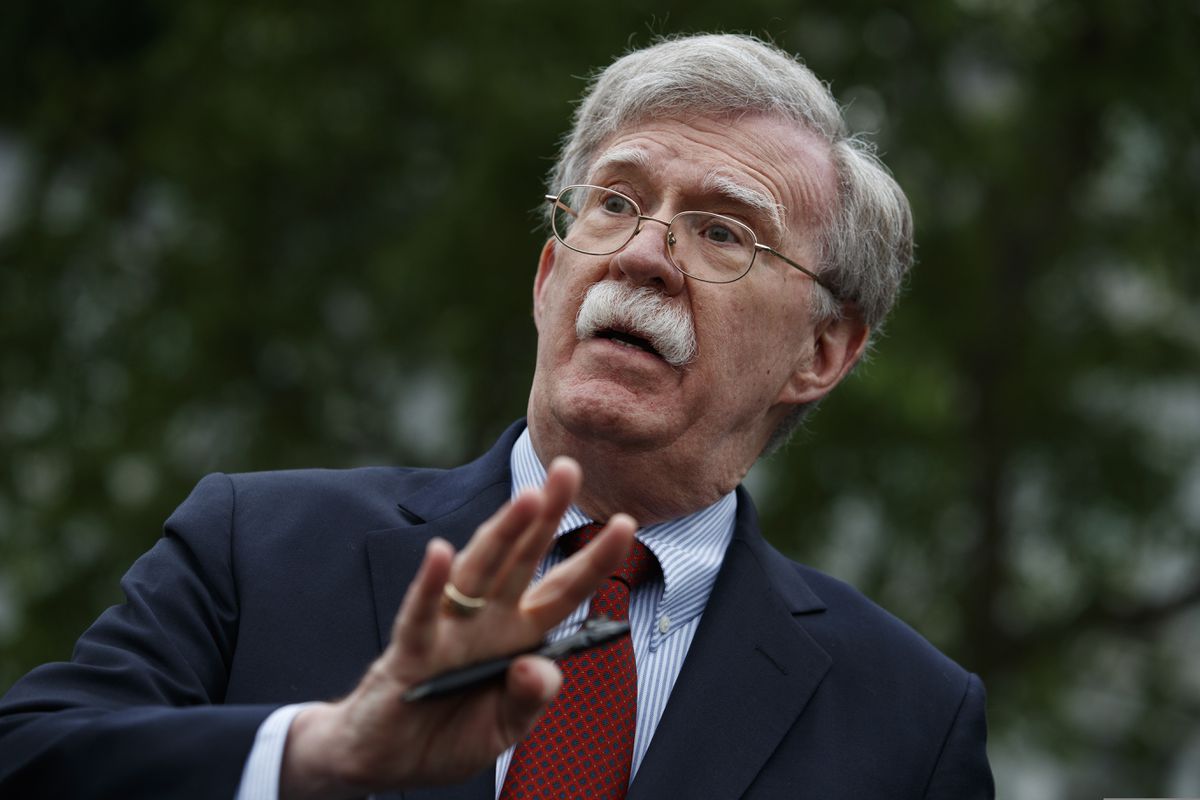 WASHINGTON - President Donald Trump said Tuesday that he had fired John Bolton as national security adviser, closing a turbulent tenure marked by widening rifts between an unorthodox president seeking a foreign policy victory and an irascible foreign policy hawk who had been deeply skeptical of much of the president's agenda.

Trump announced Bolton's departure via a terse Twitter message and said he would name a replacement next week. Candidates may include at least two conservative foreign policy commentators who appear on Fox News, where Bolton's fierce attacks on Democrats endeared him to Trump two years ago.

The appeal didn't last, as Bolton's opposition to elements of Trump's approach on North Korea, Iran and Afghanistan, among other issues, put him at odds with his boss and other advisers. Trump also largely blamed Bolton for overselling the strength of Venezuela's political opposition earlier this year.

"I informed John Bolton last night that his services are no longer needed at the White House," Trump said on Twitter. "I asked John for his resignation, which was given to me this morning. I thank John very much for his service."

The chaos and infighting that swirls around Trump's White House was on immediate display, when Bolton disputed the president's account of his departure.

"Let's be clear, I resigned, having offered to do so last night," Bolton said in a text to The Washington Post. "I will have my say in due course. But I have given you the facts on the resignation. My sole concern is US national security."

Bolton also responded to Trump on Twitter. "I offered to resign last night and President Trump said, 'Let's talk about it tomorrow,' " he wrote.

Bolton's chief nemesis within the administration, Secretary of State Mike Pompeo, serenely told reporters that "the president's entitled to the staff that he wants at any moment."

"He should have people that he trusts and values," said Pompeo, who readily acknowledged disagreements with Bolton.

"There were defintely places where Ambassador Bolton and I had differing views about how to proceed," Pompeo said as he and Treasury Secretary Steven Mnuchin spoke to reporters about an unrelated terrorism issue.

Hours earlier, the White House had listed Bolton alongside Pompeo and Mnuchin at that session. Despite months of occasional rumors about Bolton's ouster, the timing Tuesday appeared to take several senior White House officials and others by surprise.

Trump himself had joked about the perception that Bolton was on thin ice, saying in May that he appreciated hearing Bolton's views even though he often disagreed with them.

"It doesn't matter," Trump said, because only he makes decisions.

Bolton and Trump had been at odds on issues of substance and style.

Bolton did not like Trump's repeated meetings with Kim Jong Un, administration officials said, and he had argued against directly meeting with Iranian officials. He also did not like the president's repeated insistence that Russia rejoin the Group of Seven nations.

Trump regularly mocked Bolton as a warmonger, sometimes even ticking off countries and joking that Bolton would want to invade them, current and former senior administration officials said.

The mustachioed conservative Bolton, a fixture in Republican administrations and hawkish foreign policy circles for decades, was an odd fit from the start.

Widely read and witty, Bolton was also known as a bureaucratic knife-fighter and a difficult colleague. He had ruffled feathers in previous administrations and on Capitol Hill. He could not win Senate confirmation as United Nations ambassador in 2005, leading President George W. Bush to install him there in a temporary capacity.

Although he frequently said he had checked his own views at the West Wing door when he went to work for Trump, Bolton's distrust of diplomatic engagement with North Korea and Iran never abated, and he had more recently been seen as an obstacle in Trump's effort to broker an end to the Afghanistan War.

Bolton's relationship with Trump got off to a rough start when Bolton appeared to undermine Trump's planned first summit in Singapore with Kim Jong Un by comparing nuclear negotiations there to Libya, whose leader was ousted and killed after having volunatrily given up nuclear weapons.

Earlier this year, Bolton was excluded from key portions of a follow-up summit in Hanoi, Vietnam, and did not accompany Trump on a historic visit to North Korea. Bolton instead made a sudden trip to Mongolia, taking a sizable delegation and angering White House officials including acting chief of staff Mick Mulvaney.

"There is no one issue here," White House deputy press secretary Hogan Gidley told reporters. "They just didn't align on many issues."

Asked Tuesday whether he was blindsided by Trump's announcement, Pompeo said, "I'm never surprised, and I don't mean that on just this issue."

Bolton's relationship with Pompeo had become increasingly tense in recent months, with Bolton privately accusing Pompeo of spending too much time furthering his own political ambitions and Pompeo arguing that Bolton's inflexibility and hard line views were corrosive.

Senate Republicans were caught off guard - the Armed Services Committee chairman, James Inhofe of Oklahoma, said he found out because a staffer heard the news on the radio - and several expressed concerns about losing the hawkish adviser from the president's national security team.

"I'm very disappointed. I don't know whether he was fired, or whether he resigned. I know what the president said, I know what he said," Inhofe said. "Nonetheless, he's one of my closest friends. He's one of the most knowledgeable that I know and I'm disappointed that association has been dissolved."

"You know, a lot of people up here thought a lot of him," said Senate Majority Whip John Thune, R-S.D., the second-ranking Senate Republican. "He was very knowledgeable, but obviously they had differences of opinion and sounds like not compatible in the way they wanted to go about doing things."

"It's clear to me the relationship had soured, and I hope he'll pick a national security adviser that he has confidence in," Graham said. "But I appreciate John Bolton. I think he sees the world for the dangerous place it is."

Bolton, who took the job in April 2018, was Trump's third permanent national security adviser. His deputy, Charlie Kupperman, will continue in an acting capacity.

Trump is likely to consider Stephen Biegun, the lead envoy on North Korea, among posible replacement, current and former administration officials said. Other potential candidates include Douglas Macgregor, a retired Army officer whose conservative commentary has praised Trump's approach on Iran, and Richard Grenell, the ambassador to Germany, current and former officials and outside Trump advisers said. Macgregor met recently with Mulvaney to discuss the potential of an administration job, two people familiar with the meeting said.

Bolton brought many friends and former colleagues to the National Security Council, which while in keeping with past prqactice at the White House was also viewed by some Trump aides as excessive. Bolton's large entourage seemed to have deeper loyalty to Bolton than to Trump, one former senior administration official said.

Bolton acted like "a big shot" and Trump "got sick of it," said that former official, who like others interviewed requested anonymity because they were not authorized to discuss the matter on the record.

Bolton recently said he did not want to appear on television to defend some of the administration's positions, particularly on Afghanistan and Russia, according to administration officials, who requested anonymity to discuss private conversations.

Bolton irritated others by regularly asking for a large entourage to travel, which many others were frustrated by, the officials said.

"I don't know exactly what precipitated [his leaving], but the president deserves people around him who will carry out his policies," Paul said. "I, for one, think the chances of war go down greatly with John Bolton leaving the administration. The president deserves someone who understands his America-first policy."

While Bolton tweeted that he "offered to resign" on Monday evening, the actual time of his offer was Monday afternoon, in a meeting in the Oval Office with the president before Trump flew to North Carolina for a political rally. Bolton and the president discussed policy, and Bolton ultimately floated his possible resignation, two people familiar with the discussions said, requesting anonymity to reveal internal deliberations.

Bolton then considered his resignation into Monday evening and gave a short letter to NSC staffers on Tuesday. When asked about why Bolton tweeted on Tuesday about offering to resign "last night," the people said Bolton made a misstep with that tweet and meant to say that he decided to resign on Monday night, following the afternoon meeting.

"The afternoon meeting on Monday was the last point of contact with the president, the final meeting," one of the people said. "The tweet kind of takes you to where his mind was. He had the meeting then thought about it for a few hours, especially since the president wasn't exactly begging him to stay on and he had had enough."

A former senior official said Mulvaney, Pompeo and Pence all concluded that Bolton had leaked internal deliberations surrounding a planned meeting at Camp David last weekend in which Trump would have met with Taliban representatives as a step to ending the 18-year war in Afghanistan. Trump canceled the secret meeting via Twitter on Saturday evening.

Trump was infuriated at the idea that Bolton was trying to make himself look good, the official said.

Bolton has insisted to colleagues and confidants that he had done no such thing. Bolton's allies viewed this charge as a way to "knife John on the way out" one person close to him said and called it "flatly untrue."

Bolton had argued against the U.S.-Taliban negotiations for months, saying that the Taliban could not be trusted and that Trump could achieve his chief aim in Afghanistan - the withdrawal of U.S. troops - without any agreement with the militants.

Democrats seized on the latest turnover in the administration.

"Today's action by the president is just the latest example of his government-by-chaos approach and his rudderless national security policy," Senate Minority Leader Chuck Schumer, D-N.Y., said in a statement. "When Ambassador Bolton's extreme views aren't enough for you, the United States is headed for even more chaotic times."

"This revolving door of American leadership is devastating to our nation's security as our allies now turn to more stable nations - like China and Russia - as our foreign policy infrastructure falls apart," he said.

Bolton was preceded by Michael Flynn and H.R. McMaster.

Flynn, a retired Army lieutenant general, resigned in February 2017 over revelations about his questionable contacts with the Russian ambassador to the United States and his misleading statements about the matter to senior Trump administration officials.

McMaster, an Army lieutenant general at the time of his hiring by Trump, was forced out in March 2018 after enduring the ire of conservatives for months and disagreeing with Trump on some key foreign policy strategies.