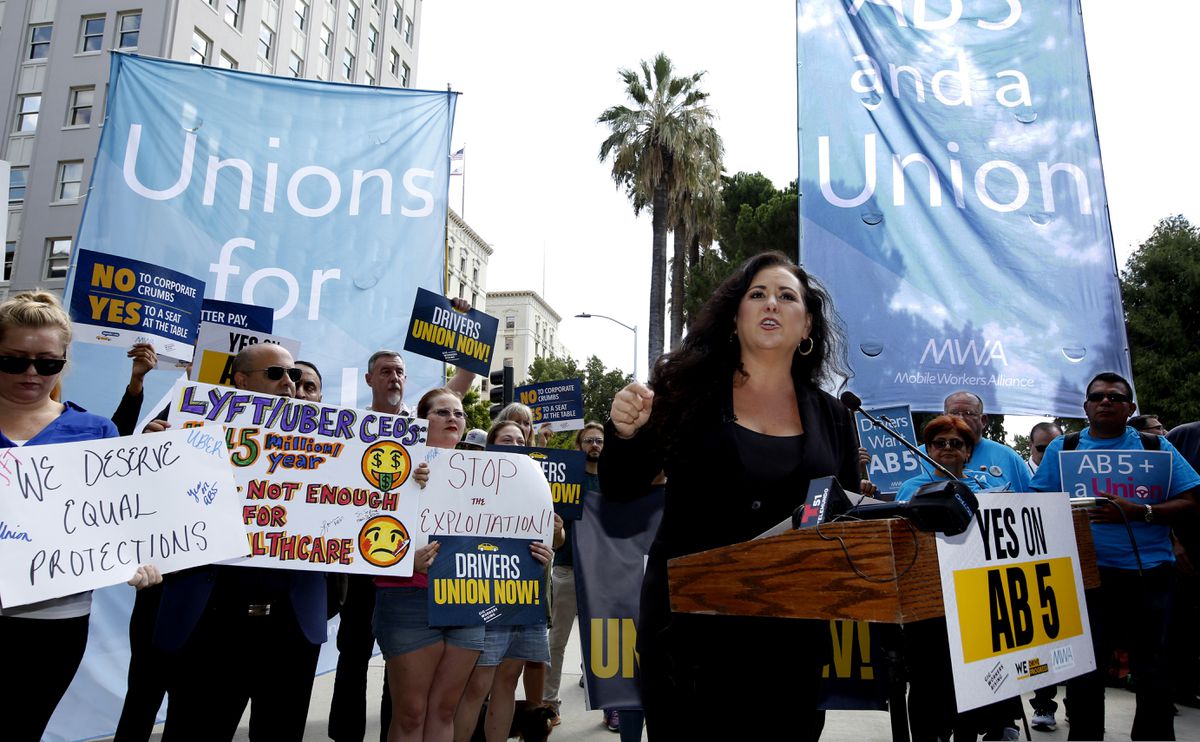 In this Aug. 28, 2019, photo, Assemblywoman Lorena Gonzalez, D-San Diego, speaks at rally calling for passage of her measure to limit when companies can label workers as independent contractors at the Capitol in Sacramento, Calif. California lawmakers were debating a bill that would make companies like Uber and Lyft label their workers as employees, entitling them to minimum wage and benefits. (AP Photo/Rich Pedroncelli, File)

In this Aug. 28, 2019, photo, Assemblywoman Lorena Gonzalez, D-San Diego, speaks at rally calling for passage of her measure to limit when companies can label workers as independent contractors at the Capitol in Sacramento, Calif. California lawmakers were debating a bill that would make companies like Uber and Lyft label their workers as employees, entitling them to minimum wage and benefits. (AP Photo/Rich Pedroncelli, File)

Uber and Lyft drivers have long complained about their wages and contractor status. Now it’s the latest issue highlighting a growing split between the Democratic Party’s establishment and the more progressive left.

At issue is California bill AB5, which could convert hundreds of thousands of contract workers in the state to employee status, instituting wage floors and ushering in benefits. The bill has drawn widespread support among advocacy groups and liberal politicians - and opposition from the app-based companies and their political backers.

The state Senate approved the bill in Sacramento late Tuesday night, sending it back to the state Assembly before it would need the governor's signature.

The bill has proven particularly divisive for members of the Democratic Party nationwide. That's in part because it has pitted Obama-era officials who have joined the companies in advisory roles against newer progressives who see a mandate to address economic inequality head-on and advocate for gig workers.

The tension between the two party wings came to a head late last month when Rep. Alexandria Ocasio-Cortez, D-N.Y., scolded former California Democratic senator Barbara Boxer, who now serves as a Lyft adviser, for penning an opinion piece in the San Francisco Chronicle criticizing some tenets of AB5.

Former "officials should not become corporate lobbyists, in letter or spirit. It's an abuse of power + a stain on public service," Ocasio-Cortez said on Twitter. "We're supposed to fight FOR working people, not against them."

The struggle has illuminated a deepening divide within the Democratic Party over establishment pro-corporate sensibilities, which progressives say has come at the expense of workers who have suffered under the gig economy. The party has become fiercely critical of the Clinton- and Obama-era moves to Big Tech and Wall Street, a sentiment most vocally expressed by presidential candidate Elizabeth Warren and freshmen congresswomen forming a cadre known as "the Squad."

As recently as this week, the candidate who most represents what political observers see as the establishment wing of the party - former vice president Joe Biden - had declined to take a stance on AB5 after multiple inquiries by The Washington Post. California Democratic Gov. Gavin Newsom, who has long been regarded as a business-friendly pragmatist, surprised some including executives at Uber and Lyft, by forcefully backing employment for ride-share drivers.

Meanwhile, Uber, Lyft and their drivers are caught in the middle. The companies are against the employee designation, which could lead them to shoulder substantial costs not previously mandated. Drivers, on the other hand, are divided because of a rift between old workers who want better benefits, protections and wages, and newer workers, some of whom have told the companies they want to maintain the flexibility that accompanies contractor status.

Uber and Lyft are pushing for an alternative to AB5, and together with Doordash say they will spend a combined $90 million on a 2020 ballot initiative on gig work, which would be expected to address aspects of the legislation to which the companies object.

Lyft said it was disappointed in the outcome of the vote late Tuesday, along with dozens of exemptions granted to other industries but not the ride-hailing companies. "We are fully prepared to take this issue to the voters of California to preserve the freedom and access drivers and riders want and need," said Lyft spokesman Adrian Durbin.

The frustration aired by Ocasio-Cortez speaks to the grievances of the working class and the policy stances that shaped some of the proposals - such as sectoral bargaining - that have arisen from it.

Bradley Tusk, an Uber investor who previously served as a political strategist for the company, said the tech industry was alluring for departing Obama officials in the wake of the financial crisis.

"Going to tech felt like you could make a lot of money without the social approbation of going to big Wall Street," Tusk said, citing the feeling of " 'so-and-so just sold out,' whereas you go to tech, you're making the world a better place. ... Now a lot of that logic has proven pretty flawed."

Democratic Presidential candidates including Sens. Warren of Massachusetts, Bernie Sanders, I-Vt., and Kamala Harris, D-Calif., and South Bend, Indiana, Mayor Pete Buttigieg have all expressed their support for the California bill. Newsom also signaled his support for the measure in an editorial on Labor Day.

Former San Antonio mayor Julián Castro, another Democratic presidential candidate who served as Housing and Urban Development secretary under Obama, tweeted his support of the measure earlier this month.

"As the gig economy grows, it's critical to insure that companies can't skirt labor protections," he wrote.

Their support has pitted them against an army of prominent Democrats who now shape policy for the ride-hailing companies. Part of what's driving the Democratic presidential push is a moved-up 2020 Democratic primary date for California, which will come three months earlier than typical in the election cycle. The candidates have seized on the issue as a way to win over voters in what could become a critical battleground for those vying for the nomination.

West is now lobbying against important components of AB5, such as shifting the designation of independent contractors to employees. West said while Uber supported AB5, it doesn't agree with the notion that ride-share drivers would most benefit from employment. Rather, he said, drivers want the ability to log on to the app at their leisure and work on their terms.

"We are not looking for an alternative bill," he said in an interview. "We're looking for an additional bill - and one that really tries to speak to these fundamental issues of the quality and dignity of independent work."

West argued the alternative Uber proposes - a $21 on-trip minimum wage, equivalent to about $15 per hour - "portable benefits" such as sick leave and injury compensation, and bargaining by sector, meet all of the standards advocated by Buttigieg. He noted that sectoral bargaining, which would allow workers to negotiate as a unit rather than on a company-by-company basis, was advocated by Sanders in his labor plan.

Earlier in August, Warren was sharply critical of the companies' reactions to AB5 in an opinion piece for the Sacramento Bee outlining her support. She said the public should be skeptical of their proposed alternatives.

Some “of the most powerful gig companies have brought in armies of lawyers, lobbyists and consultants to spread disinformation and either kill the bill or water it down so it doesn’t give workers the rights and benefits they deserve,” she wrote. “These companies’ approach would do little but sow confusion and uncertainty by adding other, still undefined, classes of workers whose rights are unclear - and perhaps unenforceable.”