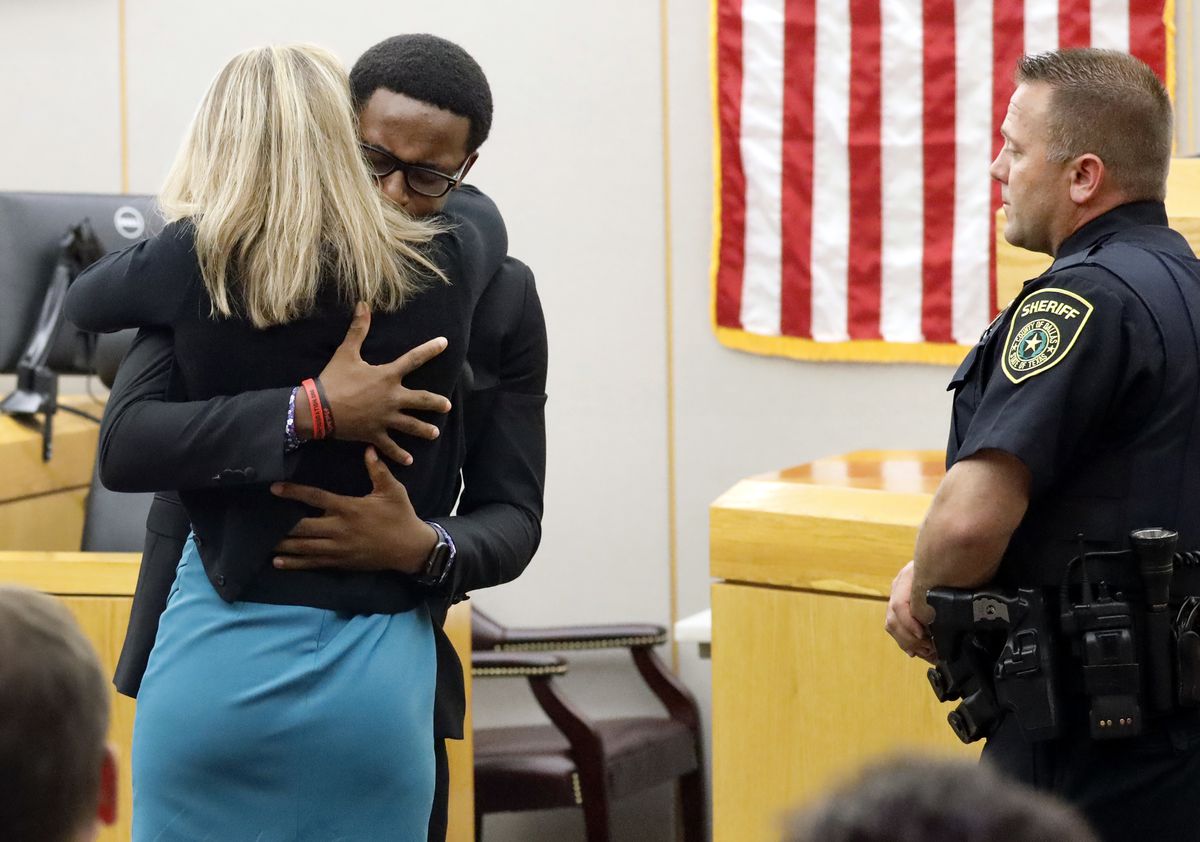 Botham Jean's younger brother Brandt Jean hugs convicted murderer and former Dallas Police Officer Amber Guyger after delivering his impact statement to her after she was sentenced to 10 years in jail, Wednesday, Oct. 2, 2019, in Dallas. Guyger shot and killed Botham Jean, an unarmed 26-year-old neighbor in his own apartment last year. She told police she thought his apartment was her own and that he was an intruder. (Tom Fox/The Dallas Morning News via AP, Pool)

Botham Jean's younger brother Brandt Jean hugs convicted murderer and former Dallas Police Officer Amber Guyger after delivering his impact statement to her after she was sentenced to 10 years in jail, Wednesday, Oct. 2, 2019, in Dallas. Guyger shot and killed Botham Jean, an unarmed 26-year-old neighbor in his own apartment last year. She told police she thought his apartment was her own and that he was an intruder. (Tom Fox/The Dallas Morning News via AP, Pool)

The white former Dallas police officer who shot and killed her unarmed black neighbor in his own apartment was sentenced to 10 years in prison - the conclusion of a dramatic trial that spotlighted issues of racial injustice, police accountability and the extraordinary capacity of a victim's family to forgive a perpetrator.

Amber Guyger, 31, could have faced up to 99 years in the 2018 slaying of Botham Jean, a 26-year-old St. Lucia native, church singer and accountant whose death drew protesters to Dallas streets. On Tuesday, Guyger's murder conviction was heralded as a rare victory in the national push for police accountability.

But on Wednesday, her sentence was almost immediately met with protest.

In the hallway outside the courtroom, Jean family supporters called the punishment "a slap in the face," as prosecutors had asked for a sentence no less than 28 years - the age Jean would be if he were still alive.

Inside the courtroom, however, a stunning scene was unfolding. Jean's younger brother - described by his family as suffering the most after the shooting - spoke directly to Guyger. He urged her to pray, he forgave her and he asked permission to give her a hug.

"I love you as a person and I don't wish anything bad on you," Brandt Jean told Guyger from the stand.

Then, as both of their families watched, the ex-officer and the brother of the man she killed met at the front of the room and held each other in a long embrace. They were both in tears, and sobs could be heard in the courtroom.

Judge Tammy Kemp, who presided over the case, held a tissue to her eyes and hugged each member of Jean's family after the trial. She then approached Guyger and, in another emotional moment, handed her a book and embraced her, too.

It was an unusual, striking conclusion to the high-profile case. Guyger had claimed that she thought she was entering her own apartment on the third floor and, mistaking Jean for a burglar, shot him out of fear for her life. Prosecutors said Jean, who had been sitting on his couch eating ice cream in an identical apartment one floor above Guyger’s, posed no threat - and jurors agreed, rejecting Guyger’s self-defense argument.

Under Texas law, the 12-member jury that convicted Guyger was also tasked with determining her punishment. Jurors rejected the "sudden passion" defense, which would have lowered the sentencing range to two to 20 years. But they chose a punishment on the lower end of the five to 99 years allowed for murder.

Before breaking for deliberations, jurors heard testimony from friends and family of both Guyger and Jean, who described each in glowing terms and discussed the far-reaching consequences of the fatal encounter.

Prosecutors asked jurors to consider how the loss of Jean - a loving, encouraging man who spent his short life wanting to help others - affected not only those close to him, but "all of us."

"We all were robbed of Botham and the greatness that he brought to Dallas County," one prosecutor said. "But honestly, who knows what his impact could truly have been had his life not been taken from him."

They contrasted Jean's character against Guyger's, pointing to text messages in which the ex-officer mocked her black colleagues and joked about the death of the Rev. Martin Luther King Jr. Those exchanges reveal what she "had in her heart" when others weren't looking, they argued.

But Guyger's attorneys said the texts were only a "snapshot" of her life and sought to portray her as a dedicated public servant who made a terrible mistake.

In testimony on Wednesday, Guyger's loved ones said she overcame a childhood sexual assault to get her job in law enforcement, a dream she'd held since she was a little girl.

"For her, that was all she ever wanted, all she ever dreamed of," said Dallas police Officer Cathy Odhiabo, one of Guyger's friends.

Karen Guyger, the ex-officer's mother, said that when her daughter first called to tell her what had happened, she was crying so hard it was difficult to understand.

“She wanted to take his place,” Karen Guyger said. “She always would tell me she wishes she could have taken his place.”

Friends and family of Jean told the jury about the pain of losing a man they described as warm and joyful, a natural leader and supportive friend.

Best friend Alexis Stossel read through her last text-message exchange with Jean, in which they reminisced about their college days at Harding University. She didn't see his response until the next morning. About the same time, she got a phone call and was told he had been killed.

Jean's father, Bertram Jean, took the stand after Stossel. He sobbed as he talked about his son. His friends sometimes told him he babied his boy, taking him to school every day and picking him up in the afternoons, but he always wanted him near.

After the sentencing, Jean's mother said the trial should inspire reform in Dallas and its police department - evidence handling and officer training, specifically.

The Washington Post’s Deanna Paul contributed to this report.