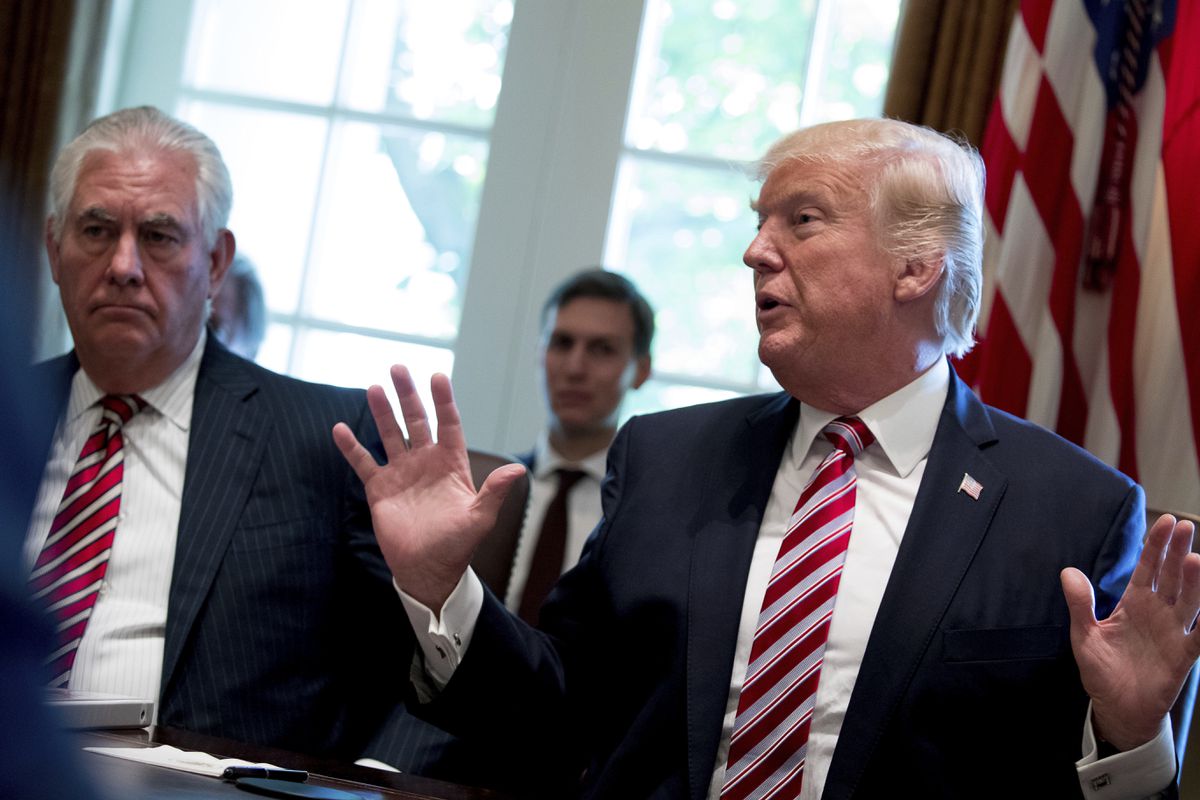 WASHINGTON - President Donald Trump sought to enlist then-Secretary of State Rex Tillerson in the fall of 2017 to work with Rudy Giuliani to help stop the prosecution of a Turkish Iranian gold trader represented by the former New York mayor, according to people with knowledge of the request.

Trump urged Tillerson in an Oval Office meeting to try to craft a diplomatic "deal" to stop the U.S. case against Reza Zarrab on corruption charges in exchange for concessions from Turkey. The request shocked the then-secretary of state, said the people, who spoke on the condition of anonymity to describe private conversations involving the president.

At the time, Turkish President Recep Tayyip Erdogan was personally lobbying Trump to get the charges dropped.

Trump, in turn, repeatedly raised the topic with Tillerson - including directly in the Oval Office meeting, according to people with knowledge of the episode.

The president was joined in the Oval Office by two of Zarrab's attorneys, Giuliani and Michael Mukasey, a former attorney general under President George W. Bush, who proposed swapping the trader for an American pastor in Turkish custody, according to two people familiar with the meeting.

"The president says, 'Guys, give Rex your pitch,' " according to one of the people.

Tillerson was so unsettled by the extraordinary request to intervene in an ongoing criminal investigation that he complained to then-Chief of Staff John Kelly that he believed it was inappropriate, according to a former administration official. Kelly told him to disregard it, the official said.

Bloomberg News first reported Trump's request to Tillerson. The Washington Post obtained new details about the extent of the lobbying effort to kill the case - including the presence of Zarrab's attorneys in the Oval Office and a visit Giuliani made to the Justice Department around the same time to ask for the case to be dropped.

The revelation of the 2017 episode comes as Trump is facing an impeachment inquiry into allegations that he used his office to seek ammunition against a political rival from the Ukrainian government.

In both cases, Trump bypassed standard government procedures and turned to Giuliani - a private lawyer with separate interests - to take part in discussions about U.S. policy. At the time of the Tillerson meeting, Giuliani was one of the president's staunchest political allies, someone who Trump later tapped in April 2018 to personally represent him.

In an interview, Giuliani confirmed he sought a prisoner exchange but declined to comment on any private discussions on the topic.

Asked about his meetings with Trump and other officials about Zarrab, he declined to answer. "You're not my prosecutor," he said.

Kelly, Tillerson and Mukasey declined to comment. The White House did not respond to requests for comment.

In rare cases, U.S. criminal prosecutions have been halted or altered to achieve to an overriding diplomatic goal, but such decisions are usually rigorously studied by the State and Justice departments, with extensive consultation with the prosecuting U.S. attorney's office.

Preet Bharara, the former U.S. attorney in New York whose office launched the investigation of Zarrab, said Trump's efforts to intervene in the case did not appear to follow that protocol.

"It's just another example of the president trying to meddle in specific law enforcement actions, whether to help an ally or harm a rival," said Bharara, a Trump critic. "This incident, like the incidents involving Ukraine and China and others, should be looked at very carefully."

Erdogan had repeatedly lobbied Trump to release Zarrab, both in personal meetings and calls in the spring and summer of 2017, according to multiple administration officials and Erdogan himself. The Turkish president claimed publicly that Zarrab, charged in a conspiracy to violate U.S. sanctions against Iran, was a political "hostage" of American law enforcement.

Erdogan met with Trump in a formal visit at the White House on May 16, 2017. Trump told associates that Erdogan raised several issues with him, including Erdogan's request that he release Zarrab to Turkey, according to two former administration officials.

The trader held embarrassing and politically damaging information about Erdogan and other top Turkish officials in his government, it was later revealed in federal court.

In late 2017, Zarrab pleaded guilty to orchestrating a multibillion-dollar conspiracy to evade U.S. sanctions against Iran by disguising money transfers so they would appear to be legitimate gold trades. He testified in federal court that the scheme was approved by Erdogan. Turkish officials denied any wrongdoing.

Giuliani and Mukasey, also a former chief judge in the Southern District of New York, had joined Zarrab's defense team in March 2017 and flew to Turkey late February to meet with Erdogan to discuss a possible "state-to-state resolution in this case," according to court filings in the Zarrab case. Mukasey told then-Attorney General Jeff Sessions before the trip, and Giuliani told Bharara, records indicate.

Their visit with Erdogan was viewed with deep suspicion by prosecutors in the Southern District of New York, who asked the presiding federal judge to examine the lawyers' role in the case.

In an affidavit unsealed in May 2017, Giuliani said his role was to help determine "whether this case can be resolved as part of some agreement between the United States and Turkey that will promote the national-security interests of the United States and redound to the benefit of Mr. Zarrab."

Behind the scenes, Giuliani was pressing U.S. officials for assistance.

"Giuliani was lobbying anyone he could find in the government to get his guy out," according to a person with knowledge of his role.

When Tillerson arrived for a routine meeting with Trump at the White House in the fall of 2017, he found Giuliani and Mukasey already sitting in the Oval Office, according to two people familiar with the episode.

The lawyers suggested that Tillerson could help craft a deal to swap Zarrab for American pastor Andrew Brunson, who was detained in 2016 after a coup attempt in Turkey. (Brunson was ultimately freed in October 2018.)

Tillerson balked, noting that Zarrab was the subject of an ongoing criminal investigation, according to one person.

Mukasey argued Tillerson had broad authority, saying effectively that he could do whatever he wanted.

After the meeting, Giuliani called Tillerson to try to follow up, but the then-secretary of state rebuffed him, according to the person familiar with Tillerson's account.

White House officials, particularly Kelly, were dismayed by his conversations with Trump, who did not seem to understand that he should not interfere in a criminal investigation, according to people with familiar with the conversations.

Sometime in mid- to late 2017, Giuliani showed up at the Justice Department and requested a meeting with then-Deputy Attorney General Rod Rosenstein about the Zarrab case, according to two people familiar with the matter. One of the people said that when Giuliani, who did not have an appointment, called to say he was coming by, he said he was coming from the White House.

His request to meet with Rosenstein was denied, the people said, though they said it was possible Giuliani then met with lower-level officials. The department, the people said, was not particularly receptive to Giuliani's advocating that the case be dropped.

Two former Justice Department officials said they were unaware of any direct pressure from the White House about the case - though they conceded it was possible conversations had taken place without their knowledge.

Trump was hardly shy about pressuring Sessions and other officials on law enforcement matters. In early summer of 2017, Trump called the then-attorney general at home and asked him to reverse his recusal from special counsel Robert Mueller III's investigation into Russian interference in the 2016 election and to investigate and prosecute Hillary Clinton, according to the special counsel report.

By later in 2017, however, the relationship between Trump and Sessions was almost completely fractured. Former Justice Department officials said the longer Sessions stayed in his position, the less frequently he talked with the president.