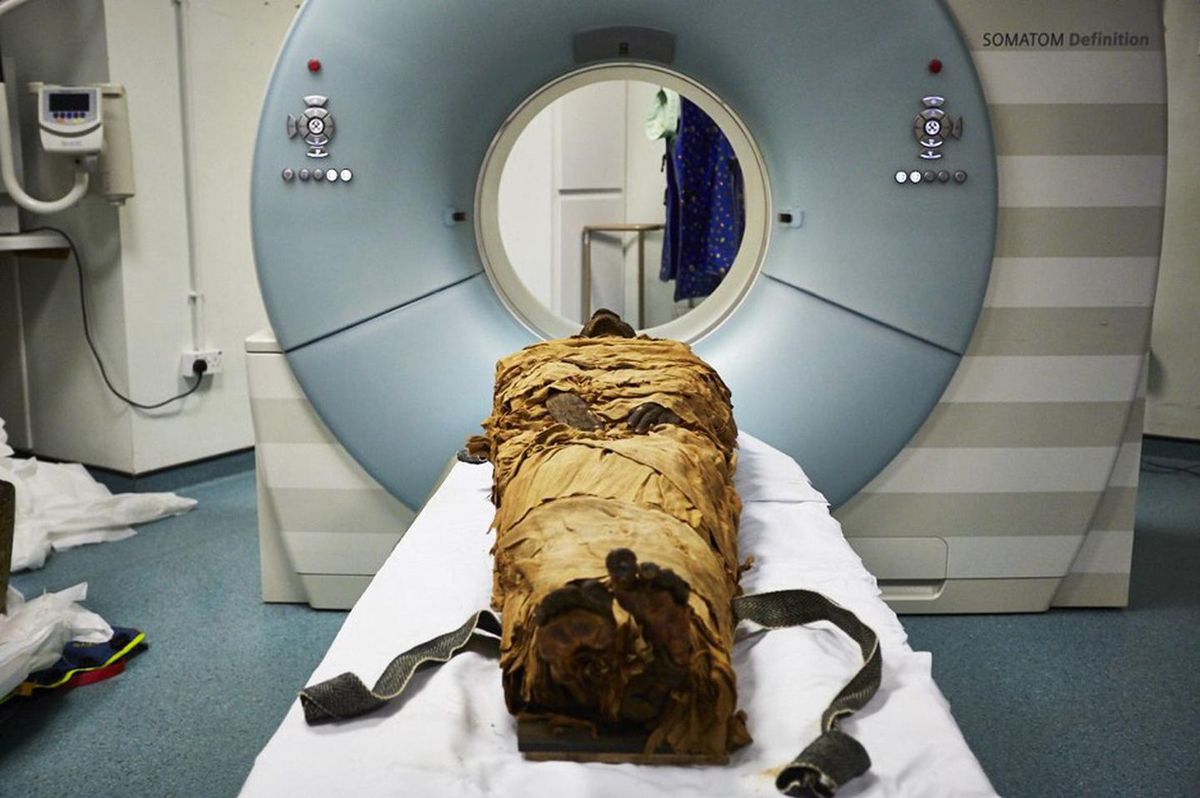 Using a model of a 3,000-year-old mummy’s vocal tract, researchers have approximated the voice of a long-dead Egyptian priest. They were able to create a single burst of sound, a vowel-like bleat between the E in “bed” and the A in “bad.”

The new study, published Thursday in the journal Scientific Reports, is the sort of science that at first seems to beg for the B-movie treatment (“The Mummy Croaks Again!”). But there’s more serious motivation involved, as well as more respect for the deceased person wrapped in burial cloth.

In fact, the study authors said that the priest, named Nesyamun, would be pleased with this postmortem re-creation of his voice. "It is the fulfillment of his belief" to have his voice heard in the afterlife, said study author John Schofield, an archaeologist at the University of York in the United Kingdom.

Nesyamun worked as a scribe at the temple of Karnak in Thebes. His voice would have been critical in his priestly duties as he spoke, chanted and sang. Nesyamun was mummified and entombed in a coffin inscribed with hieroglyphs, mainly texts from the Book of the Dead.

Since 1823, his body has been kept at Leeds City Museum in Britain, where his body was unwrapped. Scholars, surgeons and chemists have examined him in the centuries since, probing the mummy by microscope, endoscope and X-ray. A "multidisciplinary scientific investigation" of Nesyamun, published in 1828, "was the first of its kind in the world," Schofield said.

In the new work, scientists made precise measurements of Nesyamun's well-preserved vocal tract, using a CT scanner at Leeds General Infirmary in Britain. From this scan, they printed a 3-D copy of his throat and hooked it up to loudspeaker. They fed an electronic signal (a simulation of "a human larynx acoustic output," said study author David Howard) through the faux organ to produce the voice.

The single sound represents a proof-of-concept work, said Howard, who studies human speech and singing at Royal Holloway, University of London. "To produce other vowels would require changes to the shape of the vocal tract," Howard said. That's their next step, with the eventual goal of producing words, singing and even speech.

Vocal tracts are biologically unique, said University of Illinois at Urbana-Champaign aeroacoustics expert Daniel Bodony, who was not a part of the research team. The study authors adeptly captured Nesyamun’s from his lips back down to the trachea.

But the vocal tract is only half of what makes "the human being sound like the human being," Bodony said. The other half flutters at the base of the tract: the vocal folds, also known as cords or reeds. Human vocal folds vibrate at multiple frequencies, yielding "richness and emotion," and the sound the vibration produces is further distorted by traveling through the tract. An electronic substitute for fleshy vibration is why this re-creation "sounds tinny," Bodony said.

"I do think the sound is an accurate re-creation of a sound Nesyamun could have made," said Bart de Boer, who studies the evolution of speech at Belgium's Vrije University Brussels. Simple, fixed utterances of AAH-like sounds do not require the movement of tongues or teeth. But, de Boer said, "we also do not really know whether [this vowel noise] was a sound that was actually used in his language."

The study authors anticipate this re-creation, and future expansions of Nesyamun's voice, will be a hit with Leeds' audience of museum-goers. "When visitors encounter the past, it is usually a visual encounter. With this voice we can change that," Schofield said. "There is nothing more personal than someone's voice."

The dimensions of Nesyamun’s tract, smaller than a modern adult man’s, suggest he might have been a tenor. If so, the priest would have been a welcome addition to singers Howard directs. “We need them,” Howard said (meaning tenors, not mummies), “in my choir!”