US plans more evacuation flights for Americans in virus-hit Wuhan 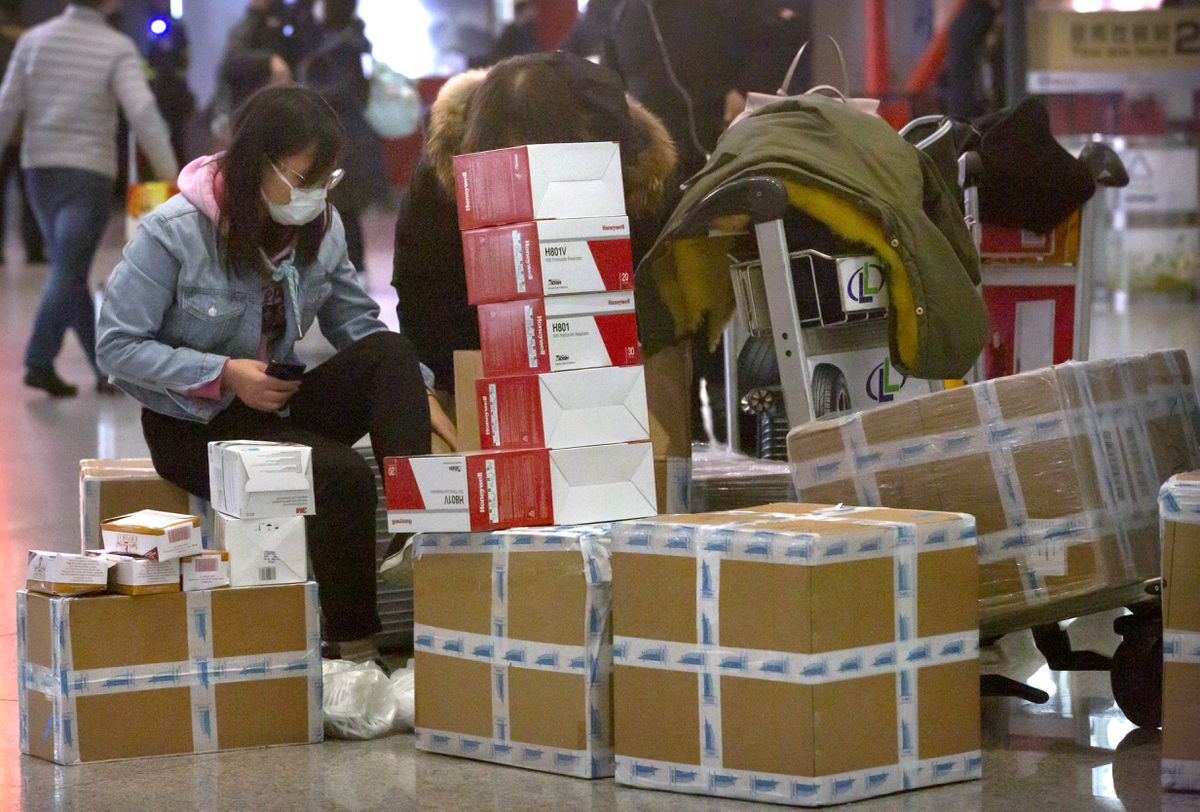 A traveler sits near boxes of face masks and respirators at the Beijing Capital International Airport in Beijing, Thursday, Jan. 30, 2020. China counted 170 deaths from a new virus Thursday and more countries reported infections, including some spread locally, as foreign evacuees from China's worst-hit region returned home to medical observation and even isolation. (AP Photo/Mark Schiefelbein)

A traveler sits near boxes of face masks and respirators at the Beijing Capital International Airport in Beijing, Thursday, Jan. 30, 2020. China counted 170 deaths from a new virus Thursday and more countries reported infections, including some spread locally, as foreign evacuees from China's worst-hit region returned home to medical observation and even isolation. (AP Photo/Mark Schiefelbein)

TOKYO - Doug Perez has a Chinese girlfriend and a Labrador puppy, and he is not leaving the virus-hit city of Wuhan without them.

But other Americans in Wuhan may finally get their chance to leave after the State Department said Thursday it was arranging more flights to evacuate its citizens trapped in the Chinese city at the epicenter of the deadly coronavirus outbreak.

The extra flights will be laid on beginning on or about Feb. 3 and will have capacity "on a reimbursable basis" for private citizens wishing to leave Wuhan, the State Department said in a message to U.S. citizens in China.

Those traveling on the flights will be subject to screening, health observations and monitoring, the department said.

The development came after some Americans trapped in Wuhan expressed frustration about being stranded in the city and what they saw as inadequate communication from U.S. diplomatic officials.

"Many Americans do feel kind of abandoned," Perez had earlier said in a Skype interview from his home in the city. "It's not necessarily how I feel, but the general sentiment among the Americans here is one of frustration and that we've been left behind."

The Chinese government imposed a total travel lockdown on Wuhan last week, leaving 9 million people, including thousands of foreigners, trapped in a city where the virus is raging, and hospitals are overflowing.

Already 129 people have died in Wuhan, with 2,261 confirmed cases and thousands more suspected of carrying the virus, official figures show, but experts say the real number could be much higher.

The U.S. government evacuated 195 Americans from Wuhan this week, flying them to a military base in California. Most were State Department officials and their families, although the department said some private citizens were included, with priority given to those at higher risk from coronavirus, including children, the elderly and those with existing health conditions.

But hundreds of Americans remain in Wuhan with little information, and growing sense of unease.

One American woman, visiting relatives in Wuhan for the Lunar New Year holiday, said she had been shocked by the tepid response from the Wuhan consulate and the embassy in Beijing.

The woman, who asked not to be named to protect her Chinese relatives, said she contacted the embassy and consulate when Wuhan was placed under a travel lockdown, and followed up with emails and calls when she learned the first evacuation flight had been organized for consular staff. The embassy, she said, had at first denied that a flight was being organized, and then told her there would be limited capacity for private citizens.

On Thursday evening, she said she had not received an email about the new flights, something she called “slightly disconcerting.”

“During this whole time I’ve had to rely on news outlets first before they send any communication,” she added. “I hope they have enough capacity this time; as I likely don’t qualify as a ‘high risk’ individual to be given priority.”

Japan has extracted more than 400 of its citizens from Wuhan and is making arrangements for a third charter flight, while South Korea planned to take people out on two charter flights on Thursday and two more on Friday. Australia, New Zealand, Canada and India are among countries also discussing evacuation flights with Chinese authorities.

Meanwhile, Perez, his girlfriend, her brother, and Chubby, the Labrador, are holed up in their two-floor apartment, with a television, iPads "and lots of things to do."

He's been watching "The Sopranos," reading, and learning computer programming. Wearing a face mask and rubber gloves, he takes the dog for a walk on the largely deserted streets, steering clear of the few other people about. Even Chubby has a mask, although he does not like wearing it, Perez said.

They venture out occasionally to stock up on supplies at local stores. There aren't any major food shortages but the situation has become "kind of freaky," he said.

"We went to the grocery store and they were testing everyone's temperature at the door," he said. "There was one guy panicking, he kept on touching his forehead."

Perez said he kept his distance.

"It was like something out of a sci-fi movie, " he said. "A masked person, you know, with goggles and everything. They're putting this temperature gun to your head. And you're waiting in line with other people all wearing masks."

Perez, a 28-year-old English teacher from Marin County in the San Francisco Bay area, says he has lived in Wuhan for two years and likes it there, despite reservations about air pollution and public sanitation. The wages are decent and the cost of living is lower than in Beijing or Shanghai, he says.

"It's like a ghost town, barely any people and cars," 21-year-old American-born college student Nicholas Schneider told Reuters. "It's a weird feeling. I feel like I'm in an apocalypse somehow."

Schneider, who holds dual U.S.-German citizenship, said he contacted German and American officials seeking a way out. The U.S. embassy offered him a $1,100 seat on a charter flight, he said.

But an embassy official told him he would have to get himself to the airport on the other side of Wuhan, 30 miles away, he said. With most transportation down, he found no way to make the trip, and an embassy staff member told him that they would give his seat to someone else, Schneider said.

"I couldn't believe what I just heard. That's not how you deal with a citizen in need ... it seemed like she didn't care," Schneider said.

The mood among Chinese people stranded in Wuhan isn't good either. Perez said his girlfriend is in touch with many people on WeChat.

"There's definitely a lot of people who are panicked, scared," he said. "Who knows what's going to happen? It's pretty depressing."

Wuhan's city government, concerned that hospitals and medical staff will be overwhelmed, has told people with mild symptoms to stay home, he said, and many people would rather treat themselves than face chaos in the hospitals.

"The general sentiment among the Chinese community here is that it's not safe to go to the hospitals, they're too overwhelmed," he said. "They're worried that if you go to the hospital, you might get infected by other by other patients."

Wuhan is rushing to build two pop-up hospitals to isolate thousands of infected patients but officials admit there are not enough beds to cope with the number of suspected cases.

China initially rejected offers of assistance from international health officials but finally agreed this week to allow in a mission led by the World Health Organization. The CDC said it expected some of its experts to be invited as part of that mission.

"If I could ask for anything - set politics aside," said Perez. "Work with the Chinese, forget about politics, get our people out.

“And if the U.S. government could donate supplies to China and if China could accept them, that would be amazing. Just give it to Americans who are stuck here, saying, ‘Hey, here’s a care package of masks, gloves and the like.’ That would be amazing,” he said.