As U.S. plans evacuations for American travelers on cruise ship in Japan, a passenger from another ship turns up with coronavirus 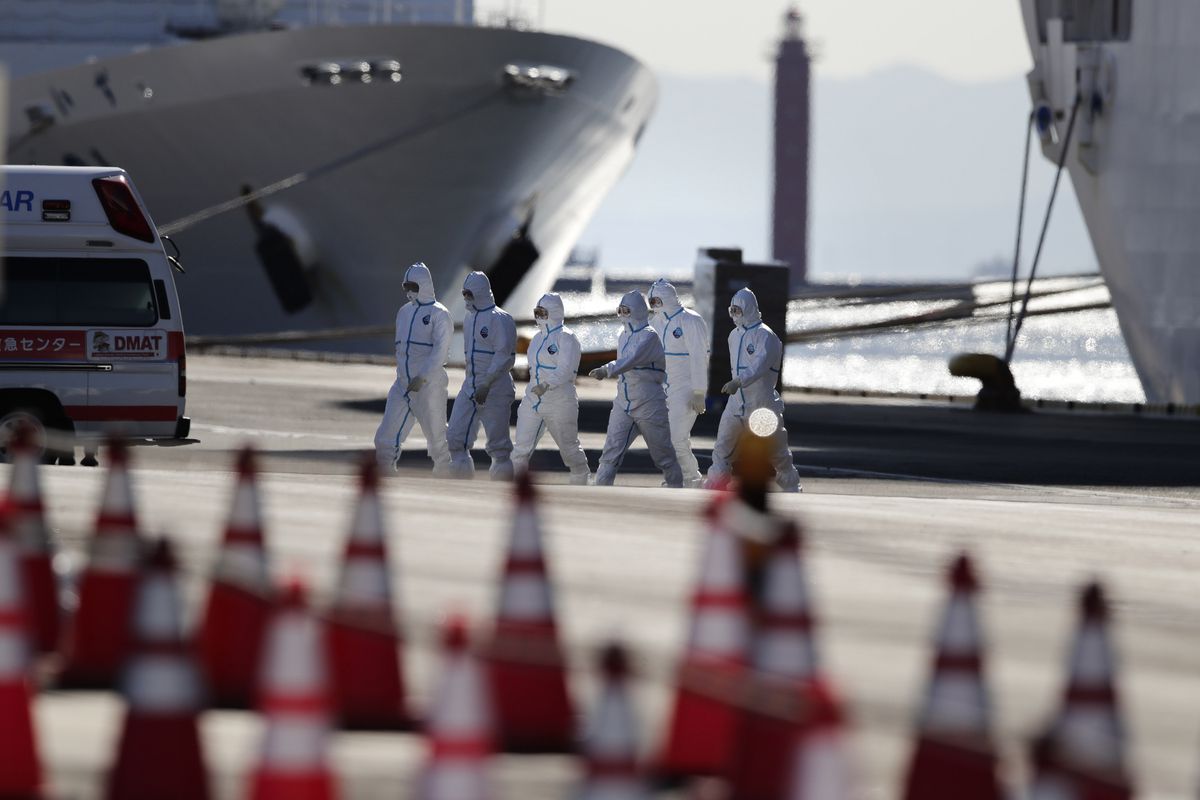 YOKOHAMA, Japan - U.S. officials on Saturday set in motion plans to evacuate Americans under lockdown aboard the coronavirus-stricken Diamond Princess cruise ship docked in the Japanese port of Yokohama. But some passengers greeted the news with outrage after learning that they will face a 14-day quarantine upon their return to the United States.

Meanwhile, an 83-year-old American woman aboard another cruise ship, which docked in Cambodia on Friday after being refused by five other ports, tested positive for coronavirus. Cambodia had cleared her and others on the ship to travel, but she was tested again in Malaysia after flying there and showing symptoms, according to Malaysian health officials.

Details about the woman's case remained unclear. But it could force health officials in the United States and other countries to reevaluate whether to put additional checks on passengers from the MS Westerdam, who are heading home.

In China, the epicenter of the outbreak, a team of experts from the World Health Organization is expected to arrive Sunday, following prolonged negotiations with the country's government. They will travel to Wuhan, where the coronavirus was first detected in December, and other affected cities to see the efforts underway to contain the virus and treat patients, China's National Health Commission said Saturday.

The team from the Geneva-based WHO will encounter a nation under even more draconian quarantine rules to halt the virus' spread as the number of cases nationwide surpasses 66,500 and the death total reaches approximately 1,500. Meanwhile, France announced that a patient had died of the illness, marking the first death outside Asia.

WHO Director General Tedros Adhanom Ghebreyesus said Saturday that "it's impossible to predict which direction this epidemic will take" and expressed concern about "the lack of urgency in funding the response from the international community."

Chinese President Xi Jinping, under pressure to show that he has been proactive in addressing the virus, on Saturday released a Feb. 3 speech that he gave to the Communist Party’s most powerful body acknowledging that he had asked top party officials to respond to the outbreak almost two weeks before the nation’s officials spoke publicly about the virus, according to local news reports.

Not far from Tokyo, Americans on the Diamond Princess reacted with both relief and anger to the news Saturday that they may soon disembark. The two-week quarantine that they will face on U.S. soil is consistent with the isolation of Americans evacuated from Wuhan, as the virus has a maximum incubation period of 14 days.

The Diamond Princess passengers will be housed at Travis Air Force Base in California or Joint Base San Antonio-Lackland in Texas and kept separate from the previous evacuees, according to the Centers for Disease Control and Prevention. All passengers will be screened before leaving the ship and constantly monitored and evaluated along the way, the CDC said.

The Diamond Princess was declared a quarantine zone on Feb. 5, so passengers had expected to be able to leave the ship beginning Wednesday. But as more tests were carried out on passengers and crew members, it became clear that a high percentage had contracted the virus, and experts warned that there was a risk it could still be spreading on the ship.

The situation on the Diamond Princess raised alarm about other cruise ships sailing around Asia, including the Westerdam, which had been stranded at sea for two weeks. Five ports denied the ship docking privileges, fearing that passengers could transmit the coronavirus, before the ship docked in Cambodia and passengers began to disembark on Friday.

On Saturday, Malaysian health authorities said an American passenger from the Westerdam tested positive for coronavirus after flying into Malaysia from Cambodia, Reuters reported. It's the first case of an infected person who had been on that ship. The woman was not identified by name.

The cruise ship said the passengers had been tested regularly onboard, and 20 were checked once more after the boat docked, with no positive cases. Cambodian health officials had cleared the woman on Friday to travel on to Malaysia, Reuters reported.

The woman was sent to isolation in a hospital and was in stable condition, the Malaysian health ministry said, according to Bloomberg News. Her husband, 85, tested negative for the virus but is under observation, the ministry said.

Holland America said in a statement Saturday that it was "awaiting secondary testing for confirmation" of the American's case, and working with Malaysia, Cambodia and CDC authorities.

As the virus continues to spread rapidly in China, the country's leaders - after initially trying to suppress or play down the severity of the virus but discovering that belated efforts to contain it were not working - are trying to show that they are on top of the outbreak. Beijing is also increasingly worried about the impact on China's economy, which was already slowing.

All residents returning to Beijing are required to stay at home "or submit to group observation" for 14 days, and those who refuse "will be held accountable under law," according to a notice issued Friday by the capital's virus prevention working group.

Analysts saw this as a sign that the virus is still spreading, but also that the Communist leaders are growing increasingly nervous about party meetings scheduled for the first week of March. The "Two Sessions" attract thousands of party members from around the country to Beijing's Great Hall of the People.

In Wuhan, authorities moved to seal all residential compounds. The city's 11 million residents had been placed under a kind of emergency law, which stipulates that only one member of each household could go out once every three days to buy groceries and other supplies. But now, only people who are seeking medical treatment or working on epidemic prevention and control will be allowed to leave residential complexes.

Other cities in Hubei province - including Huanggang, Xiaogan and Honghu, with a combined population of 11 million - have instituted similar "wartime measures" for the next 14 days.

In Shanghai, people returning from areas "hit hard by the epidemic" are required to quarantine themselves. But the megacity is trying to dissuade those who don't come from or work in the city from entering. Everyone arriving in Shanghai's airports and train stations must have their temperature checked and be registered against their name.

In Paris, French Health Minister Agnès Buzyn said Saturday that an 80-year-old man from Hubei province had succumbed to the illness after being hospitalized in Paris, along with his daughter, since Jan. 25. The daughter is expected to be discharged soon.

On the Diamond Princess, the news of an additional quarantine period was a blow to some of the Americans, who say they had been repeatedly told otherwise by U.S. officials.

"Why didn't they test everybody [earlier], and it would have been over?" asked Melanie Haering, 58, of Tooele, Utah, echoing a question many people have asked from the beginning.

Fifield reported from Beijing, and Berger and Iati reported from Washington. the Washington Post’s Liu Yang in Beijing and James McAuley in Paris contributed to this report.