In China, 200 million kids have gone back to school - online 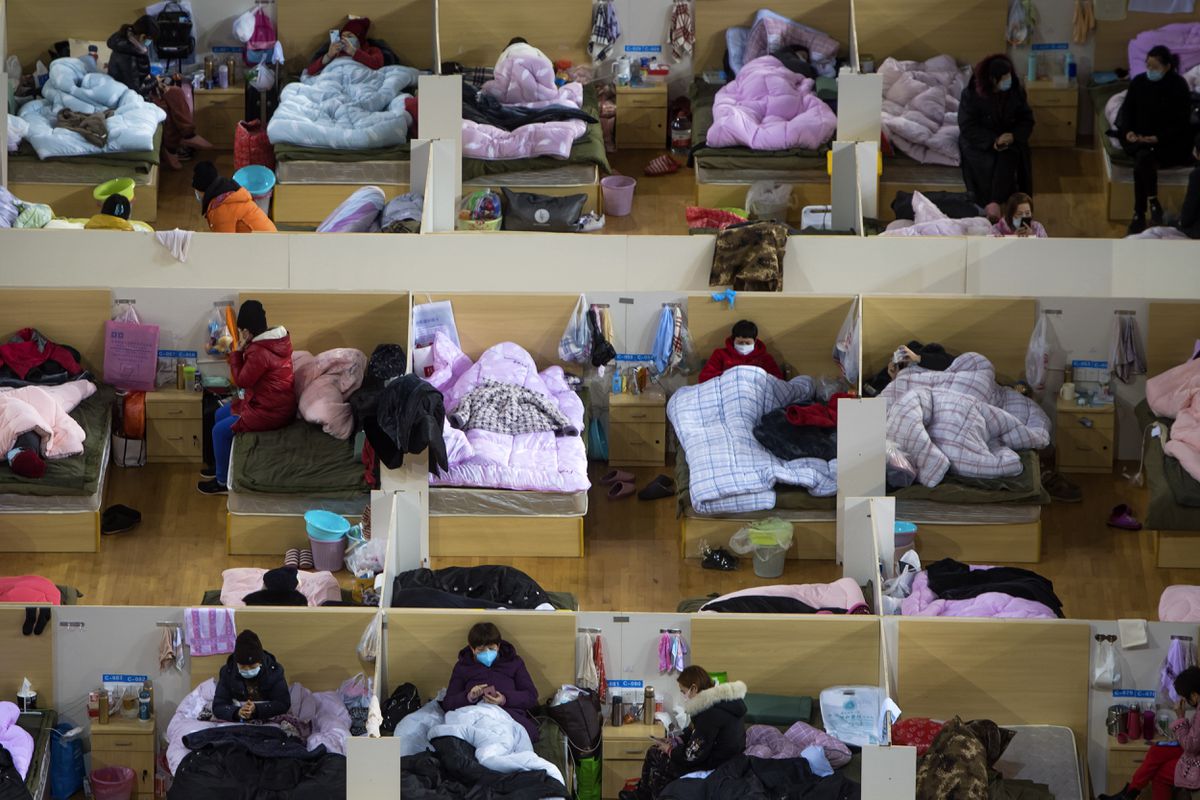 In this Monday, Feb. 17, 2020, photo released by Xinhua News Agency, patients infected with the coronavirus take rest at a temporary hospital converted from Wuhan Sports Center in Wuhan in central China's Hubei Province. China reported thousands new virus cases and more deaths in its update Tuesday on a disease outbreak that has caused milder illness in most people, an assessment that promoted guarded optimism from global health authorities. (Xiao Yijiu/Xinhua via AP)

In this Monday, Feb. 17, 2020, photo released by Xinhua News Agency, patients infected with the coronavirus take rest at a temporary hospital converted from Wuhan Sports Center in Wuhan in central China's Hubei Province. China reported thousands new virus cases and more deaths in its update Tuesday on a disease outbreak that has caused milder illness in most people, an assessment that promoted guarded optimism from global health authorities. (Xiao Yijiu/Xinhua via AP)

BEIJING - Almost 200 million kids across China started their second semester on Monday. But it was a school day unlike anything they had before the Lunar New Year holiday.

For starters, they didn't stand in front of a flagpole and sing the national anthem. They watched it on screens. In some parts of the country, so many kids were watching at the same time that internet speeds ground to a halt.

Then came Chinese and English lessons, all online, and math and science classes, also online. One middle school boy, sitting with his computer at his front door in Beijing, was asked what he was studying. He responded: physical education.

Chinese authorities have taken extreme measures to try to contain the coronavirus, which has spread nationwide. More than half the country’s 1.4 billion people are now restricted from leaving their homes in some way. Public gatherings are banned, including those in schoolyards.

Most Chinese schools were due to resume classes Monday but have instead moved to some kind of online or home learning system, straining the resources of teachers, the attention of kids and the patience of parents.

"What kind of life am I living?" said Cao Jing, a mother of two in Zhengzhou, who is not just cooking and doing laundry for her two children, an 11-year-old girl and a 7-year-old son, but is also copying test papers by hand and trying to wrangle technology for online classes.

Her kids, already struggling with cabin fever, are not enjoying the switch to online learning.

"They only think about playing and don't want to study at all," said an exasperated Cao, who said she hopes they will be back at school before she "falls apart."

Some parents vented anonymously on social media. "When all schools' online classes officially kick off today, parents will become teachers' assistants and nannies," one mother wrote on Weibo. The sentiment was apparently not appreciated. The post that was soon deleted by censors.

This scene is playing out in homes nationwide - with no end in sight. All schools are closed indefinitely while the public health emergency continues.

So China is channeling its full technological might into making sure kids can do their lessons remotely.

The Ministry of Education on Monday introduced a "national internet cloud classroom" supported by more than 7,000 servers and designed tocater to 50 million elementary and middle school students at the same time. Lessons cover 12 academic subjects, including "moral education" and "epidemic education."

In this trying time, China's state media has tried to turn these lemons into lemonade. "Every disaster can serve as a shock and challenge to our life values," China Comment wrote. "The ongoing war against the virus is a great class for students and real-life training for adults as well."

Annie Yao, the mother of a Beijing fifth-grader, gave the online classes a positive review, saying they had not demanded much of her and had occupied her 11-year-old son, Jerry, who studied from 8:30 a.m. to 4:30 p.m. Monday.

"He's happy to have classes today," she said. "His teacher assigned a book to read and asked them to write a report, to draw pictures, do anything they're good at."

Still, Jerry said he prefers school and playing with his classmates during recess.

In the southern city of Shenzhen, teachers at Mingde Experimental School were trying to come to grips with the technology on the first day back.

"It is a compromise made between the school and parents, because some working parents can't supervise children's learning during workdays," said a teacher who gave only his family name as Yang because he wasn't authorized to speak publicly.

Indeed, the system has many shortcomings. Many families don't have computers. Those with more than one child may not have more than one device. Child care in many families in China is provided by grandparents, who may not be internet-savvy. There is the problem of extended screen time.

At the upper levels, the disruption to the school schedule could prove calamitous. Each June, about 10 million seniors sit down for their day-long college entrance exam, a single test that can make or break their future.

The Education Ministry is closely monitoring the epidemic and will decide later whether to delay the exam, an official said last week.

But it's not just kids who are at home. Many people with office jobs are working remotely, meaning parents are trying to work from home, often in small apartments, with a child taking online classes and unable to go outside to blow off steam.

To try to ease the pressure, Beijing authorities have said that in families with two working parents, one of them would be able to stay home and look after the children without losing any of their pay.

Meanwhile, kids have been robbed of something that is the foundation of family balancing acts everywhere: the comforting structure of the school day.

Children may be feeling stressed and may become more clingy, anxious, angry or agitated, the World Health Organization says in guidelines for dealing with the outbreak.

"Keep to regular routines and schedules as much as possible, or help create new ones in a new environment, including school/learning as well as time for safely playing and relaxing," the advice says.

China's Ministry of Education said in a notice published last week that "online classes aren't solely for academic purposes." In addition to studying the curriculum, teachers could provide instruction on mental health.

Schools around the country report having built classes into the schedule to help kids deal with their emotions.

"We've launched all the rich and varied online courses we can think of," said one teacher at Experimental Primary School in Beijing, giving her name only as Gao because she also wasn't authorized to speak to reporters. Those courses include classes to try to take care of students' mental and physical health.

In Shenzhen, Yang tried to remain upbeat: "Nobody knows for sure when we can return to school eventually, but we are doing the best we can to engage our students and keep things going."