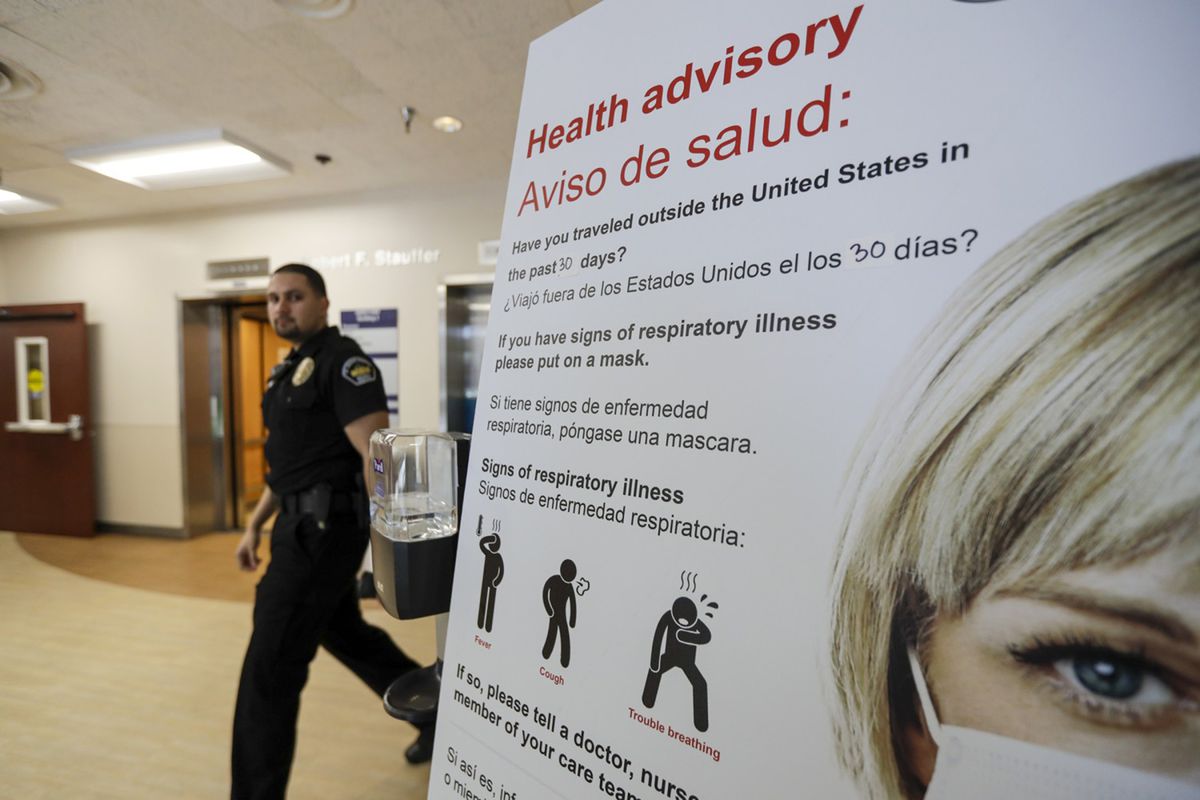 ROCKLIN, Calif. — The crackling of a police loudspeaker drew neighbors out of their homes to observe an unusual spectacle on a typically quiet residential street: a California county trying to force a resident to respect quarantine orders.

A police helicopter circled overhead on Thursday as an officer stood outside his patrol car and instructed an elderly woman to go back inside a single-story home owned by a man who died of COVID-19, a passenger who may have fallen ill on a cruise to Mexico and became the first person in the state to succumb to the virus.

The struggle to contain the coronavirus in just one household speaks to the gargantuan task many of the state’s 58 counties face as they try to contact and assess the 1,590 California residents who disembarked from the Grand Princess cruise ship in San Francisco on Feb. 21. The Placer County victim was on that same ship, creating the prospect that other passengers returned home two weeks ago carrying COVID-19.

State officials obtained a passenger manifest from the cruise company on Wednesday and began immediately informing 44 counties of the names of potentially exposed passengers who reside in their areas. But the statewide outreach began 12 days after the passengers returned to port in San Francisco and dispersed into local communities, plenty of time for them to potentially expose others. Some officials have acknowledged that the spread of the virus is beyond their control, and there is widening discussion on whether they should shift from a strategy of tracking every potential exposure to asking the public to limit social gatherings.

"We are moving as quickly as possible to limit the spread of disease," said Dr. Aimee Sisson, the public health officer for Placer County. "To be frank, we would not be surprised to see a second wave of cases connected to these cruise passengers given the amount of time that's passed since they disembarked."

Princess Cruises alleged Saturday that the man who died was already carrying the virus when he boarded the ship. Sisson disagreed and said the county's investigation found that he likely contracted the disease on the trip.

The state said approximately a dozen passengers on the Grand Princess cruise that traveled to Mexico and returned to San Francisco on Feb. 21 had tested positive for the new coronavirus. Local officials reported four cases in Placer County, two in Contra Costa County, two in Sonoma County and one each in Santa Cruz, Ventura, Madera and Alameda counties.

Several passengers interviewed by the Los Angeles Times complained about a lack of communication from county health officials, with several claiming last week that they were not contacted by anyone but the cruise company and have been unable to get tested for the virus.

Heidi Wolter, a Napa County resident, said she called the county and identified herself as a passenger after she read about a fellow traveler on the ship testing positive in Sonoma County. She said she experienced a five-day headache and suspected her elderly mother may have been in contact with Placer County victims. But she struggled to get through to a nurse, who didn’t offer her any help seeking a test, she said.

"I am not trying to panic anybody, but I am just trying to let you know (people) that were exposed to this stuff are out there and they are running amok," Wolter said. "I'm sure there are people from the cruise who don't even know they shouldn't be rubbing elbows."

Karen Relucio, Napa County's public health officer, said her department wasn't aware of any major concerns about the cruise ship until the state announced the first death of a passenger and released the manifest to counties. Relucio said someone like Wolter would be considered low risk and would be advised to self-monitor for two weeks when the county began making calls.

"I don't think local health departments were really informed of the gravity of the situation until Wednesday," Relucio said.

Other counties admitted that contacting the passengers was a low priority as other potential sources of exposure ballooned in their jurisdictions. The first cases of COVID-19 in California were confirmed in January and experts believe it's possible that the virus entered the country undetected shortly after the outbreak began in China.

For some, the Grand Princess case became another sign that efforts to stop the spread of the virus are exceeding their capabilities.

"For us, because we have community transmission, lots of people are being exposed every day," said Solano County Health Officer Bela Matyas.

Solano County has three confirmed cases of COVID-19, two of which involved residents contracting the disease in the community. One confirmed case exposed an estimated 400 people alone, he said.

"And this wasn't a particularly gregarious person," Matyas said. "So, as you can see, a handful of people on the Grand Princess are not going to the front of the line on our priority list."

Matyas said the moderately sized Solano County has a unit of 15 people who focus on communicable diseases, but that other departments have been helping and the state Department of Public Health, the U.S. Centers for Disease Control and Prevention and Travis Air Force Base have all provided additional staff.

"It's still a very large burden," he said. "We have been working beyond our capacity for a while."

Karen Smith, a communicable disease physician and a former director of the state health department, said the situation reflects the struggle county health departments will encounter in the coming weeks to keep up with demand as more people become exposed and test positive.

Smith and others say public health officials are in very serious conversations statewide now about when communities should transition from the task of locating potential contacts of a confirmed patient to broadly asking people to stay home and not congregate in groups — a sobering acknowledgment that the virus cannot be stopped.

"When do we get to the point where we don't have the capacity to keep doing it how we're doing it?" said Smith, who is working as a consultant in Santa Clara and Mendocino counties. "At that time, we want to slow the virus — it's unlikely that we're going to stop the virus — so we can provide adequate health care."

San Francisco issued recommendations for social distancing on Friday, advising residents to stay home as much as possible and avoid congregating in large groups. Santa Clara County, which has some 20 confirmed cases, issued similar guidelines. Smith said the shift allows counties to prioritize preventing the spread of the virus in health care facilities, nursing homes and other high-risk settings.

In a briefing Friday, Dr. Barbara Ferrer, director of the Los Angeles County Department of Public Health, said that for now, the county has the capacity to do contact tracing, a method of quickly identifying a chain of potential transmission of the disease, for known cases and keep up with demand. But that could change.

"We have capacity right now, should there be hundreds of cases, we will just flip to mitigation, and with a concentration on working with institutions where there might be small outbreaks," she said.

Ferrer said that more extreme measures, such as closing schools, canceling mass gatherings and shutting down public transit, will be considered as the outbreak grows. She said at this point officials feel confident in their ability to find people who are symptomatic and identify and quarantine their contacts.

"If we have a lot more cases ... we would move toward more widespread social distancing measures, and if we have exposures in places like schools where lots of people got exposure and needed to be quarantined you would see possible closures," she said.

Solano County initially required those exposed to COVID-19 to quarantine for 14 days at home. But, according to Matyas, the county in recent days has transitioned to asking those type of residents to stay home only if they develop symptoms.

"It's way too late to identify everyone once you have community transmission," he said. "The truth is that we have no clue who has been exposed. At some point, we will decide as a state or a nation to go this direction. We have to say it's here and we have to protect critical infrastructure like health care workers and emergency responders and fragile people."

Relucio in Napa, where there are no confirmed COVID-19 cases, said a team of roughly 20 employees is working on disease containment, including six nurses who are doing outreach to travelers being monitored or under quarantine, including requiring that residents send in pictures of thermometers displaying their temperature. She said a lab that serves Napa and three other counties just received coronavirus test kits on Friday.

Gov. Gavin Newsom's office said the California Department of Public Health is prepared to deploy resources to counties that request help and has already sent staff to Placer, Santa Clara and Solano counties to help identify people who have been exposed to the disease. State public health staff in Richmond and Sacramento are also helping with phone calls, coordination and guidance on individual cases.

The state activated its emergency centers at the Department of Public Health and the Office of Emergency Services and Newsom declared a state of emergency on Thursday to alleviate any regulatory restrictions related to response efforts. The current budget includes $20 million in emergency funds that the state can use to respond to the crisis with another $20 million proposed for the fiscal year beginning in July.

The administration is also working with the CDC to secure additional testing kits and received clearance last week to distribute emergency reserves of face masks to health care workers.

The governor also announced last week that health plans would be required to cover the costs of testing and other services related to COVID-19, and the state's lab in Richmond began processing test kits in mid-February.

Despite feeling pressure on the ground, many county health officers view the state's role as providing guidance to communities.

"I do think it makes sense because (the counties) understand the communities," said Diana Dooley, a former secretary of the California Health and Human Services Agency and later chief of staff to Gov. Jerry Brown. "Everyone wants a magic wand or a silver bullet in a circumstance like this, but you have to be careful that you're respecting some process and the people who are on the ground and know what they are doing."