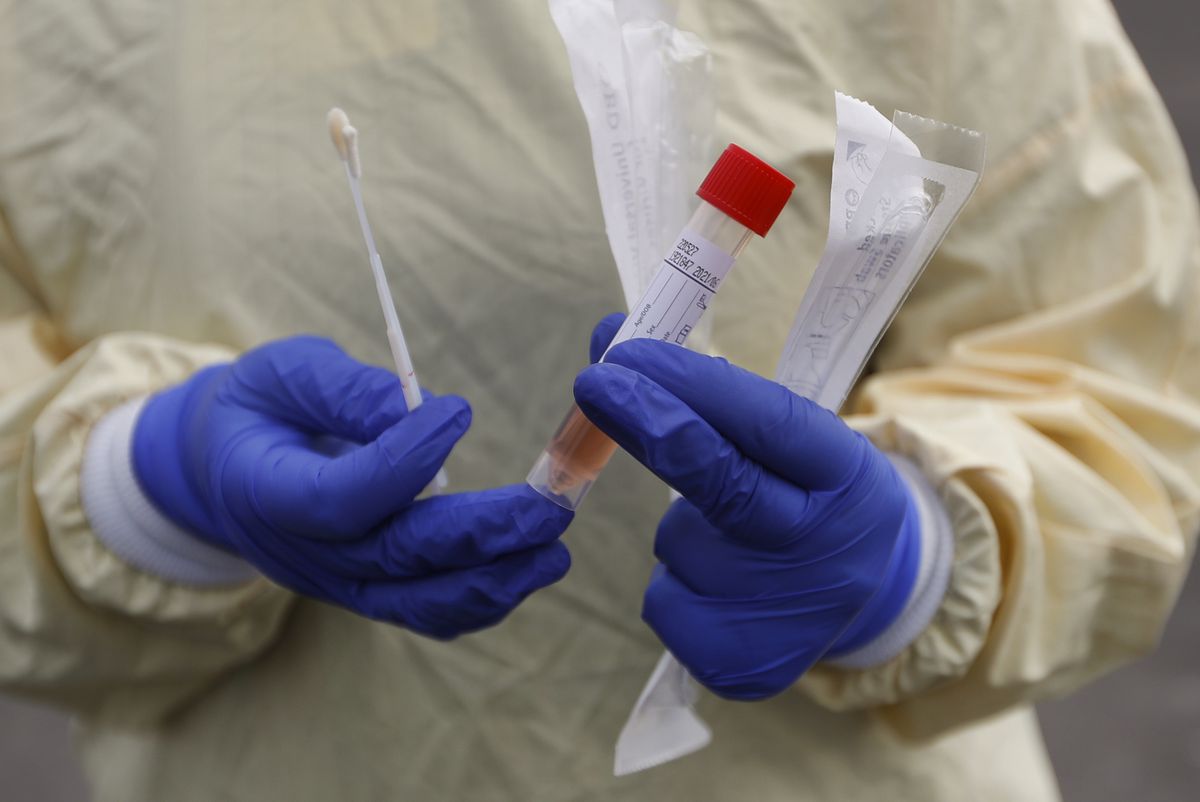 Hospitals on the front lines of the pandemic are engaged in a heated private debate over a calculation few have encountered in their lifetimes - how to weigh the “save at all costs” approach to resuscitating a dying patient against the real danger of exposing doctors and nurses to the contagion of coronavirus.

The conversations are driven by the realization that the risk to staff amid dwindling stores of protective equipment - such as masks, gowns and gloves - may be too great to justify the conventional response when a patient "codes," and their heart or breathing stops.

Northwestern Memorial Hospital in Chicago has been discussing a universal do-not-resuscitate policy for infected patients, regardless of the wishes of the patient or their family members - a wrenching decision to prioritize the lives of the many over the one.

Richard Wunderink, one of Northwestern's intensive-care medical directors, said hospital administrators have asked Illinois Gov. J.B. Pritzker for help in clarifying state law and whether it permits the policy shift.

"It's a major concern for everyone," he said. "This is something about which we have had lots of communication with families, and I think they are very aware of the grave circumstances."

Officials at George Washington University Hospital in Washington say they have had similar conversations, but for now will continue to resuscitate covid-19 patients using modified procedures, such as putting plastic sheeting over the patient to create a barrier. The University of Washington Medical Center in Seattle, one of the country's major hot spots for infections, is dealing with the problem by severely limiting the number of responders to a contagious patient in cardiac or respiratory arrest.

Several large hospital systems - Atrium Health in the Carolinas, Geisinger in Pennsylvania and regional Kaiser Permanente networks - are looking at guidelines that would allow doctors to override the wishes of the coronavirus patient or family members on a case-by-case basis due to the risk to doctors and nurses, or a shortage of protective equipment, say ethicists and doctors involved in those conversations. But they would stop short of imposing a do-not-resuscitate order on every coronavirus patient. The companies declined to comment.

Lewis Kaplan, president of the Society of Critical Care Medicine and a University of Pennsylvania surgeon, described how colleagues at different institutions are sharing draft policies to address their changed reality.

"We are now on crisis footing," he said. "What you take as first-come, first-served, no-holds-barred, everything-that-is-available-should-be-applied medicine is not where we are. We are now facing some difficult choices in how we apply medical resources - including staff."

The new protocols are part of a larger rationing of lifesaving procedures and equipment - including ventilators - that is quickly become a reality here as in other parts of the world battling the virus. The concerns are not just about health-care workers getting sick but also about them potentially carrying the virus to other patients in the hospital.

Alta Charo, a University of Wisconsin-Madison bioethicist, said that while the idea of withholding treatments may be unsettling, especially in a country as wealthy as ours, it is pragmatic. "It doesn't help anybody if our doctors and nurses are felled by this virus and not able to care for us," she said. "The code process is one that puts them at an enhanced risk."

Wunderink said all of the most critically ill patients in the 12 days since they had their first coronavirus case have experienced steady declines rather than a sudden crash. That allowed medical staff to talk with families about the risk to workers and how having to put on protective gear delays a response and decreases the chance of saving someone's life.

A consequence of those conversations, he said, is that many family members are making the difficult choice to sign do-not-resuscitate orders.

Health-care providers are bound by oath - and in some states, by law - to do everything they can within the bounds of modern technology to save a patient's life, absent an order, such as a DNR, to do otherwise. But as cases mount amid a national shortage of personal protective equipment, or PPE, hospitals are beginning to implement emergency measures that will either minimize, modify or completely stop the use of certain procedures on patients with covid-19.

Some of the most anxiety-provoking minutes in a health-care worker's day involve participating in procedures that send virus-laced droplets from a patient's airways all over the room.

These include endoscopies, bronchoscopes and other procedures in which tubes or cameras are sent down the throat and are routine in ICUs to look for bleeds or examine the inside of the lungs.

Changing or eliminating those protocols is likely to decrease some patients' chances for survival. But hospital administrators and doctors say the measures are necessary to save the most lives.

The most extreme of these situations is when a patient, in hospital lingo, "codes."

When a code blue alarm is activated, it signals that a patient has gone into cardiopulmonary arrest and typically all available personnel - usually somewhere around eight but sometimes as many as 30 people - rush into the room to begin live-saving procedures without which the person would almost certainly perish.

"It's extremely dangerous in terms of infection risk because it involves multiple bodily fluids," explained one ICU physician in the Midwest, who did not want her name used because she was not authorized to speak by her hospital.

Fred Wyese, an ICU nurse in Muskegon, Michigan, describes it like a storm:

A team of nurses and doctors, trading off every two minutes, begin the chest compressions that are part of cardiopulmonary resuscitation or CPR. Someone punctures the neck and arms to access blood vessels to put in new intravenous lines. Someone else grabs a "crash cart" stocked with a variety of lifesaving medications and equipment ranging from epinephrine injectors to a defibrillator to restart the heart.

As soon as possible, a breathing tube will be placed down the throat and the person will be hooked up to a mechanical ventilator. Even in the best of times, a patient who is coding presents an ethical maze; there's often no clear cut answer for when there's still hope and when it's too late.

In the process, heaps of protective equipment are used - often many dozens of gloves, gowns, masks, and more.

Bruno Petinaux, chief medical officer at George Washington University Hospital, said the hospital has had a lot of discussion about how - and whether - to resuscitate covid-19 patients who are coding.

"From a safety perspective you can make the argument that the safest thing is to do nothing," he said. "I don't believe that is necessarily the right approach. So we have decided not to go in that direction. What we are doing is what can be done safely."

However, he said, the decision comes down to a hospital's resources and "every hospital has to assess and evaluate for themselves." It's still early in the outbreak in the Washington, D.C. area, and GW still has sufficient equipment and manpower. Petinaux said he cannot rule out a change in protocol if things get worse.

GW's procedure for responding to coronavirus patients who are coding includes using a machine called a Lucas device, which looks like a bumper, to deliver chest compressions. But the hospital has only two. If the Lucas devices are not readily accessible, doctors and nurses have been told to drape plastic sheeting - the 7-millimeter kind available at Home Depot or Lowe's - over the patient's body to minimize the spread of droplets and then proceed with chest compressions. Because the patient would presumably be on a ventilator, there is no risk of suffocation.

In Washington state which had the nation's first covid-19 cases, UW Medicine's chief medical officer, Tim Dellit, said the decision to send in fewer doctors and nurses to help a coding patient is about "minimizing use of PPE as we go into the surge." He said the hospital is monitoring health-care workers' health closely. So far, the percentage of infections among those tested is less than in the general population, which, he hopes, means their precautions are working.

Bioethicist Scott Halpern at the University of Pennsylvania is the author of one widely circulated model guideline being considered by many hospitals. In an interview, he said a blanket stop to resuscitations for infected patients is too "draconian" and may end up sacrificing a young person who is otherwise in good health. However, health-care workers and limited protective equipment cannot be ignored.

"If we risk their well-being in service of one patient, we detract from the care of future patients, which is unfair," he said.

Halpern's document calls for two physicians, the one directly taking care of a patient and one who is not, to sign off on do-not-resuscitate orders. They must document the reason for the decision, and the family must be informed but does not have to agree.

Wyese, the Michigan ICU nurse, said his own hospital has been thinking about these issues for years but still is unprepared.

"They made us do all kinds of mandatory education and fittings and made it sound like they are prepared," he said. "But when it hits the fan, they don't have the supplies so the plans they had in place aren't working."

Over the weekend, Wyese said, a suspected covid-19 patient was rushed in and put into a negative pressure room to prevent the virus spread. In normal times, a nurse in full hazmat-type gear would sit with the patient to care for him, but there was little equipment to spare. So Wyese had to monitor him from the outside. Before he walked inside, he said, he would have to put on a face shield, N95 mask, and other equipment and slather antibacterial foam on his bald head as the hospital did not have any more head coverings. Only one powered air-purifying respirator or PAPR was available for the room and others nearby that could be used when performing an invasive procedure - but it was 150 feet away.

While he said his hospital's policy still called for a full response to patients whose heart or breathing stopped, he worried any efforts would be challenging, if not futile.

"By the time you get all gowned up and double-gloved the patient is going to be dead," he said. "We are going to be coding dead people. It is a nightmare."

The Washington Post’s Ben Guarino in New York and Desmond Butler contributed to this report.