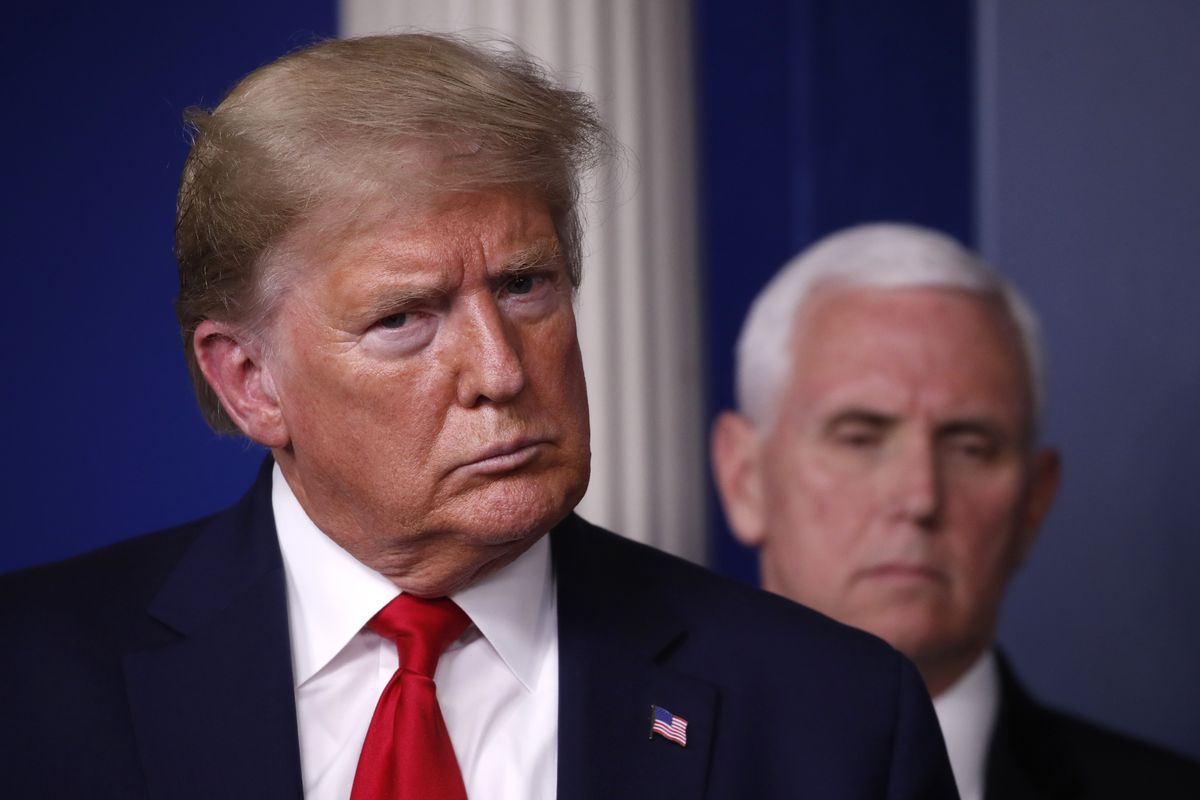 WASHINGTON — President Donald Trump on Tuesday said he hopes to scale back the nation’s dramatic response to the coronavirus pandemic will be scaled back within weeks to revive the economy and pack churches by Easter Sunday — an aspiration that was largely panned by public health experts and many elected leaders, including Republicans.

"I would love to have the country opened up and raring to go," Trump said during a Fox News town hall broadcast from the White House Rose Garden. The holiday falls on April 12.

"Our people are full of vim and vigor and energy. They don't want to be locked into a house or an apartment or some space," Trump said. "It's not for our country, and we are not built that way."

The president's push to restart the faltering U.S. economy goes against the advice of experts who continued to warn the current restrictions might need to stay in place for months to avert a tidal wave of American deaths.

His views also clashed with medical workers alarmed at the prospect of overwhelmed emergency rooms, governors who have ordered more than 100 million Americans to stay home, some members of his own party and world leaders who have pursued ever-more-aggressive measures to slow the trajectory of the pandemic.

Trump's optimism about how quickly American life could return to normal also collided with a darkening reality.

On Tuesday, the number of confirmed cases of covid-19 in the nation surpassed 50,000, continuing a rapid rise. More than 600 American deaths have been blamed on the disease, and the epicenter of the outbreak has shifted to the New York metropolitan area, which accounts now for more than 60 percent of the U.S. cases and where the disease is spreading at eight to 10 times the rate of anywhere else in the country.

Globally, the tally of confirmed cases eclipsed 400,000, suggesting that the pace of infection continues to increase. Italy neared 7,000 deaths from the pandemic, and France became the fifth country to mark more than 1,000 coronavirus fatalities.

Japan on Tuesday acknowledged what had become increasingly inevitable - that the 2020 Tokyo Olympics should be put on hold as a growing number of countries vowed not to send athletes if the Games began as scheduled in July. "In light of the current conditions and for all the athletes, we made a proposal of a postponement of about a year, to hold them securely and safely," Japanese Prime Minister Shinzo Abe said.

In New York, where the caseload topped 25,000 and the number of infections is doubling every three days, Gov. Andrew Cuomo, a Democrat, pleaded for the Trump administration to send much-needed ventilators.

Federal officials urged anyone who is leaving the New York metropolitan area to self-isolate for 14 days, to avoid "seeding" the virus in other areas.

Indian Prime Minister Narendra Modi declared in a national address that his entire country would observe a three-week lockdown to combat the coronavirus. India already had banned flights, closed its railway network and suspended the interstate bus service, and many Indian states had suspended nonessential services. Modi's declaration represented an unprecedented bid to clamp down on a country of nearly 1.4 billion people.

As other local, state and foreign leaders continued to take startling measures to stem the spread of the virus, Trump on Tuesday expressed concern that the ongoing push for social distancing and the widespread closure of businesses was causing unbearable damage to the once-thriving U.S. economy.

"You can destroy a country this way, by closing it down," Trump said during the Fox News program broadcast from the Rose Garden, comparing the current outbreak to other factors that kill Americans each year. "We lose thousands and thousands of people a year to the flu, but we don't turn the country off. We lose much more than that to automobile accidents. We don't call the automobile companies and say, 'Stop making automobiles.' "

As the president and other administration officials spoke for nearly two hours on Fox News about the need to return to normalcy, a chyron tracking the death toll in the country ticked steadily up from 594 to 600.

Trump's urge to begin lifting some of the public health guidelines the government endorsed barely a week ago has provoked pushback, including among some political allies.

"There will be no normally functioning economy if our hospitals are overwhelmed and thousands of Americans of all ages, including our doctors and nurses, lay dying because we have failed to do what's necessary to stop the virus," Rep. Liz Cheney, R-Wyo., wrote on Twitter.

Scott Gottlieb, the Trump administration's Food and Drug Administration commissioner from 2017 to 2019, said it would be impossible to return to a stable economy amid a deepening epidemic.

"So long as covid-19 spreads uncontrolled, older people will die in historic numbers, middle-aged folks doomed to prolonged ICU stays to fight for their lives, hospitals will be overwhelmed, and most Americans terrified to leave homes, eat out, take the subway, or go to the park," he wrote in a Twitter thread late Monday.

Gottlieb rejected the sentiment from Trump and some conservatives that financial ruin wrought by the pandemic would prove more devastating to Americans than the toll of the virus.

"There are two ways to end this," he wrote. "Let a vast swath of people catch [covid-19] which is unthinkable, or break the epidemic. We must choose the latter."

In Ohio, Gov. Mike DeWine, a Republican, became the latest leader from Trump's party to affirm that saving lives must take priority over returning the U.S. economy to full force.

"Protecting people and protecting the economy are not mutually exclusive," DeWine said during his daily briefing on Ohio's response to the coronavirus. "The fact is, we save our economy by first saving lives. And we have to do it in that order."

Nearly three-quarters of Americans think it will take months or longer for the coronavirus to be contained, according to a new CBS-YouGov poll that also found that most Americans think efforts to combat it are going poorly.

But a quarter of Americans think, like Trump, that containment could come as soon as the next few weeks, according to the poll.

Tuesday brought only more evidence that the measures to halt the spread of the virus, including efforts to practice social distancing, are still unfolding unevenly across the country and the world.

As he announced 39 new cases of covid-19 on Tuesday, Kentucky's governor criticized a group of young people who had defied a ban on mass gatherings and attended a "coronavirus party."

Two months into the outbreak in Japan, parks in Tokyo have brimmed with people gathering to view cherry blossoms. Visitors have packed bars and restaurants and flocked to temples to seek out blessings for the spring.

Just north of Tokyo, a martial arts event attracted about 6,500 people who packed into the Saitama Super Arena on Sunday, despite the local governor's pleas for restraint. On Saturday, more than 50,000 people gathered in Sendai, north of Tokyo, to see the Olympic flame, newly arrived from Greece, burning in a golden cauldron.

In London on Tuesday morning, hours after Prime Minister Boris Johnson ordered strict measures that would allow Britons to leave home only to exercise, shop for essentials and travel to work "where absolutely necessary," confusion continued to swirl.

Photos on social media showed people sandwiched together in subway carriages as many still attempted to travel across the city to get to work. The photos raised questions about how the government intends to support those who are self-employed and sparked debate over who should still be venturing into the workplace. Taking to Twitter, London Mayor Sadiq Khan once again urged people to avoid travel, writing: "I cannot say this more strongly: we must stop all non-essential use of public transport now."

Hours after his remarks about returning to normalcy by Easter were widely criticized, Trump appeared at another briefing in the late afternoon where he initially struck a more sober tone about the decisions that lie ahead. Reading from a prepared statement, he vowed to listen to public health experts before shifting course about when the country should relax restrictions.

"Our decision will be based on hard facts and data," he said. "Rest assured, every decision we make is grounded in the health, safety and well-being of our American citizens."

He listened quietly as Anthony Fauci, the administration's top infectious disease expert, and Deborah Birx, the coordinator of the White House coronavirus task force, urged anyone who had left New York City to self-quarantine for 14 days to avoid spreading the virus, no matter where they had gone.

But the president returned to the rosiest of scenarios, saying the country was "beginning to see the light at the end of the tunnel." He talked of how Congress seemed on the brink of passing a $2 trillion stimulus bill, and how the Dow Jones industrial average had staged an enormous 2,100-point rally during the day.

And he returned once more to his desire to see the U.S. economy somehow resurrected in time for Easter.

“I think that would be a great thing for our country,” Trump said. “We’re all working very hard to make that a reality. Easter is a very special day for a lot of reasons. What a great timeline that would be.”