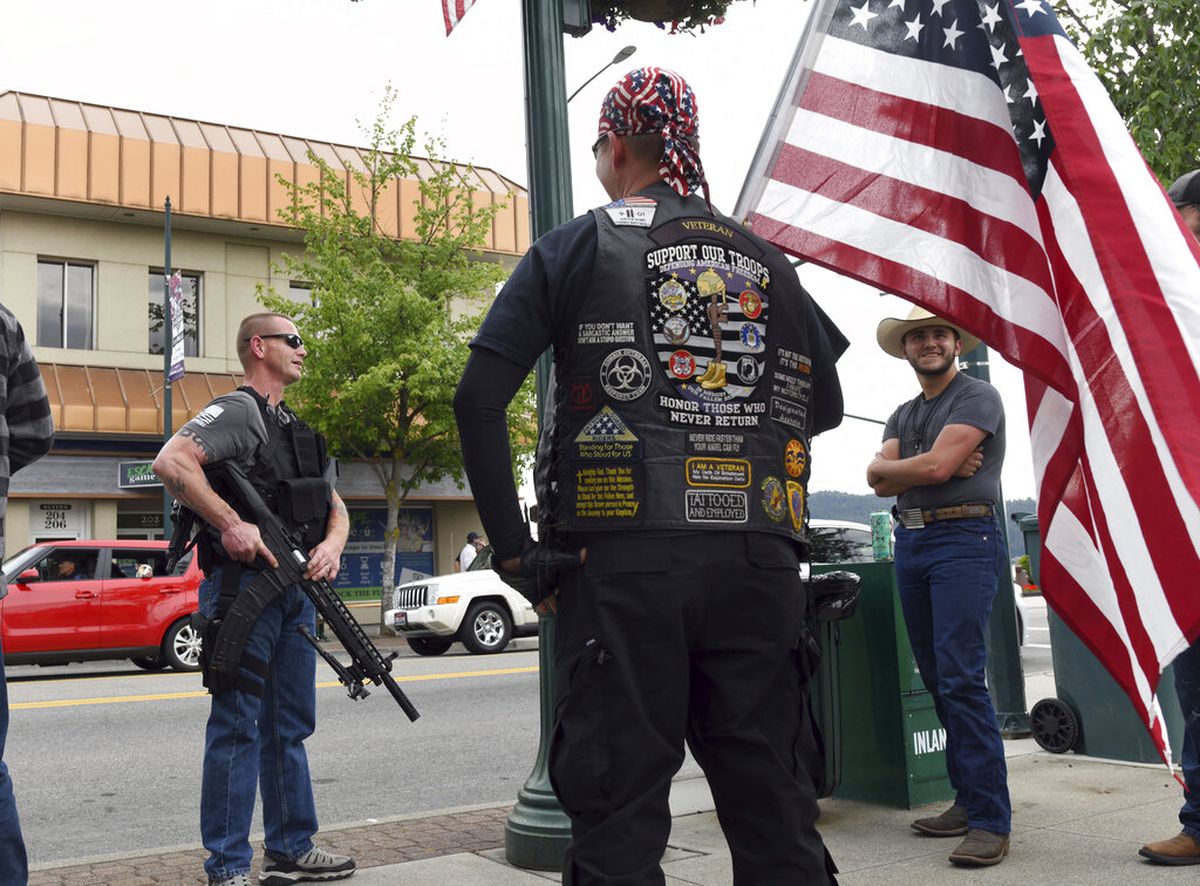 Protesters had only begun preparing to assemble peacefully in Idaho when a Facebook page for retired police officers advised its followers to stay on high alert.

"We will protect our neighborhoods," it vowed.

So when early reports about potential violence surfaced just a day later - claiming "ANTIFA agitators" were storming the state this week - scores of residents took to the streets. Armed with military-style assault rifles, they stood guard in places like Coeur d'Alene, aiming to protect the resort town of 50,000 nestled along a lake in northwest Idaho.

"Enough of us swung into action, and put the word out on social media and elsewhere, that we were able to deploy and meet any violent elements that might come here from out of state," said Trevor Treller, a sommelier and one of the armed locals. Treller, 48, said he mobilized after hearing from trusted voices that "antifa types" were on the move.

It would not prove to be true.

As vigils and protest actions unfolded in Idaho this week, local officials across the state confirmed that not a single participant had defiled a home or storefront in the name of "antifa," a loose label attributed to far-left activists. Many of the rumors about violent protests originated from a series of dubious Facebook posts, often shared widely and rarely debunked, residents there said.

The raft of myths and misstatements that triggered visceral reactions throughout Idaho illustrates how long-standing grievances have fused with the vast reach of social media during protests that have swept through big cities as well as rural towns following the police killing of a prone black man in Minneapolis last week. Though many of the protests have been peaceful pleas to redress racial injustice, scenes of burning buildings and trashed businesses - often not at the hands of the demonstrators - have fueled the perception of a country under siege.

As President Donald Trump militarizes the government's response to the roiling protests, armed civilians across the country are taking matters into their own hands. They've engaged in preemptive acts of escalation often in response to imaginary threats, raising tensions at demonstrations touched off by the death of 46-year-old George Floyd and intensified by the coronavirus pandemic and the resulting economic collapse, which have disproportionately affected black Americans.

The vigilantism is particularly visible in Idaho's Treasure Valley, long a hotbed of the anti-government militia movement and a magnet for disaffected whites fleeing more diverse and increasingly liberal enclaves, experts said. The mobilization of counterprotesters offers stark evidence that rising calls for racial justice are echoing across the country at the very moment that white resentment is also flaring.

"It's combustible," said Todd Shallat, a historian at Boise State University. "The local acts of vigilantism show how a rising population of discontented whites is reacting to the increasingly visible claims of minority groups."

The demand for racial justice, as well as the reception to it, are especially striking in Idaho, a state that has fewer than 10,000 black residents, or less than 1% of the population, according to Census estimates. Just Vermont and Montana have smaller percentages of black residents.

"There's so much implicit bias about black people's criminality that some people assume there's going to be violence or infiltration when we gather," said Whitney Mestelle, a local activist in Boise who helped organize a peaceful vigil on Tuesday. "They may even have good intentions, but it doesn't make me feel more comfortable to see people open carry."

She added: "Our agenda is peace."

Vigilante actors wielding everything from bats to firearms have appeared at protests in Philadelphia, San Antonio and other cities. At times, their involvement has resulted in violence. A black protester in Casper, Wyo., injured his hand after punching the side mirror of a counterprotester's truck, according to local media. And in Boise, an 18-year-old white man was arrested after allegedly firing his rifle into the ground during a protest outside the state capitol.

Most of the protests in Idaho have been peaceful, including in places where armed counterprotesters and militia groups have been prominent. Many said they mobilized out of concern about rioting and looting by antifa, a movement that Trump has blamed for violence nationwide. Trump's claims have drawn support from his attorney general, William Barr, who pointed to the role of "anarchistic and far-left extremists" without yet offering evidence of their involvement.

Varied actors have been accused of exacerbating the unrest, from police officers filmed brutalizing people who had their hands raised in surrender to a 20-year-old clad in the insignia of a militant movement for veganism attacking a police vehicle. Prosecutors in Las Vegas on Wednesday announced charges against three men in what they said was a right-wing conspiracy to push protests on the Strip into violence.

But discussion of antifa has reverberated especially widely across Facebook, including on a page that bills itself as "North Idaho News." The page itself acknowledges in fine print that it is "not affiliated with any real news company." On Monday, though, it claimed to have "credible information that violent rioters, not just peaceful protesters, have plans to come to Coeur d'Alene." Reached Wednesday via Facebook message, the unidentified operator of North Idaho News declined to comment.

The post quickly gained widespread attention, troubling the likes of Chris Dawson, a retired police officer from Santa Clarita, Calif., and the president of the ex-law enforcement group on Facebook that put its members on high alert. His Facebook page shared the notice, as Dawson himself said he had been "given information that antifa would be coming in from Portland or Seattle." Amplifying their fears was the rioting that marked some demonstrations in neighboring states.

Soon, armed members of local militia groups began patrolling the streets of cities including Coeur d'Alene, said David Hagar, a captain in the city's police department, who described the gatherings as peaceful. Asked if antifa-affiliated individuals had targeted the city, Hagar said: "Not that we've identified."

"I think a lot of it was fueled by social media," Hagar said.

Dawson acknowledged in an interview that there was "no concrete evidence that was going to occur." His intention, he said, was to tell his network to "be prepared in case something goes wrong."

Similar rumors gripped Payette County, a rural expanse on Idaho's western edge. One post shared widely on Facebook said antifa had dispatched a "plane load of people," arriving from Seattle targeting Idaho's rural regions. "The sheriff in Payette has already spotted some of them," the notice continued.

"It indicated maybe we had given some warning to our citizens, which we hadn't done," said Lt. Andy Creech. The original Facebook post had been shared more than 200 times before local authorities put out an alert of their own, clarifying: "The information in this social media post is not accurate."

Facebook declined to comment on the proliferation of falsehoods in Idaho. But a spokesman, Andy Stone, said in a statement that the company generally has been "working to find and remove violating activity since the protests started."

The false notion continues to have traction with local paramilitary groups, including the far-right Three Percenters, who draw their name from the disputed claim that just 3% of American colonists were fighting at any one time during the revolt against the British crown. An Idaho branch said in a Facebook post on Sunday that it had "credible intel" about plans for an antifa-induced riot in Boise. No such riot took place.

Treller, who left California five years ago for Coeur d'Alene, said reports of extremist activity were "quadruple verified," including by "those who monitor some of the communications going on between these groups." He could not produce the communications.

"Several of them were going to be coming in from out of state, particularly from Washington and Oregon, in hopes of causing trouble of some indeterminate kind," he said. "Possibly rioting, possibly looting, certainly demonstrating, which can lead to those sort of things if it's the wrong kind of people demonstrating, like the more radical elements of Black Lives Matter or left-wing extremists."

The apparent intention, Treller said, was to "strike a symbolic blow against a state that doesn't cultivate these sorts of unpleasant and not-very-patriotic movements."

"The fact that we appeared in such great numbers, and with much more efficient weapons than they have, could be the reason it did not happen," he said.

Others decried the show of force. The focus on outside agitators discredits homegrown organizing, said Lisa Sanchez, a member of the Boise City Council.

"To assert yourself and your right to live in a safe, welcoming environment is threatening to the point where people feel they need to show up with guns," Sanchez said.

She noted that armed protesters had appeared last month on the steps of the state capitol to demand the reopening of the economy during the pandemic - a mobilization that brought no similar warning about rioting. In other states, similar demonstrations interfered with Democratic deliberation. In Michigan, gun-toting protesters gathered at the statehouse demanding that lawmakers ease pandemic restrictions, causing the legislative session to be canceled rather than running the risk of facing an armed insurrection.

Recent protests against police violence in Idaho have not caused similar disruptions.

Tai Simpson, an indigenous activist in Boise, said the Tuesday vigil she and Mestelle had organized drew a crowd of about 5,000 to the city's downtown, concluding at about 10:30 p.m. "without any interruption from agitators or antifa protesters." Several altercations with counterprotesters broke out later in the night, she said.