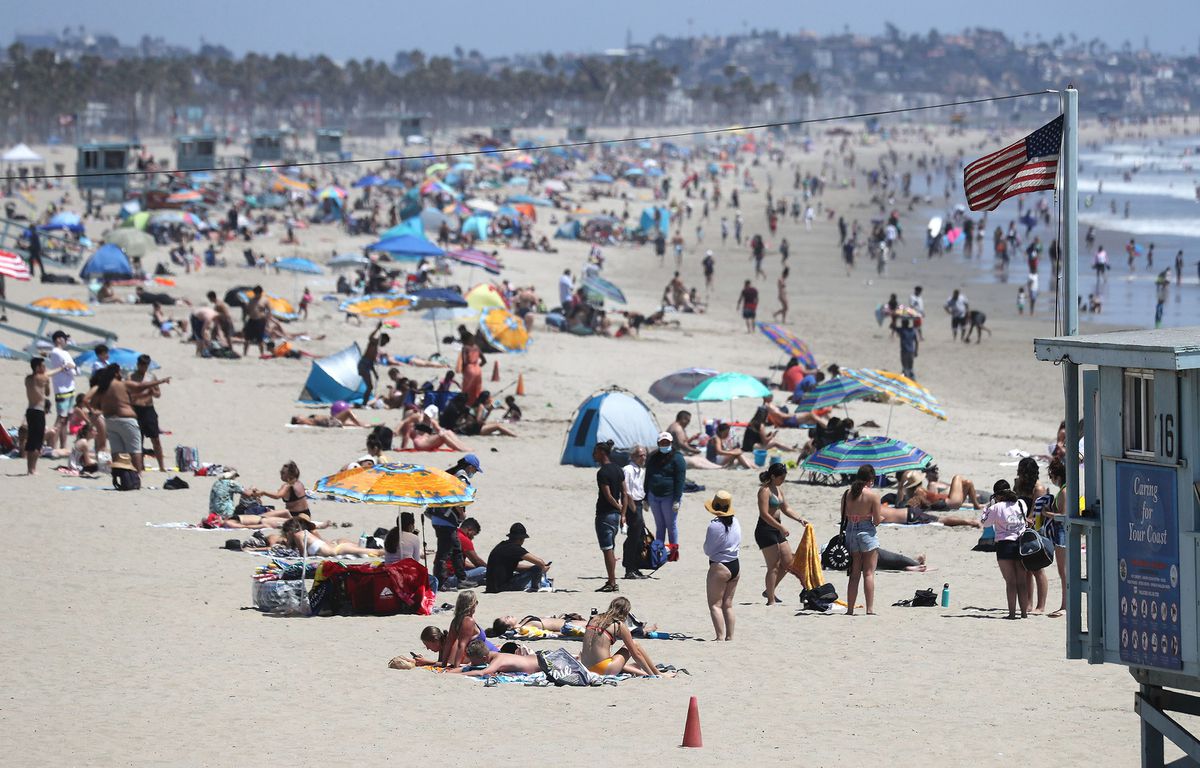 People gather on Santa Monica beach amid the COVID-19 pandemic on July 2, 2020 in Santa Monica, California. Beginning July 3, Los Angeles County beaches and piers will be closed through the July 4th holiday weekend amid some reinstated restrictions intended to slow the spread of the coronavirus. (Mario Tama/Getty Images/TNS)

People gather on Santa Monica beach amid the COVID-19 pandemic on July 2, 2020 in Santa Monica, California. Beginning July 3, Los Angeles County beaches and piers will be closed through the July 4th holiday weekend amid some reinstated restrictions intended to slow the spread of the coronavirus. (Mario Tama/Getty Images/TNS)

SEATTLE — Six months into a pandemic that has killed more than half a million people, more than 200 scientists from around the world are challenging the official view of how the coronavirus spreads.

The World Health Organization and the U.S. Centers for Disease Control and Prevention maintain that you have to worry about only two types of transmission: inhaling respiratory droplets from an infected person in your immediate vicinity or — less common — touching a contaminated surface and then your eyes, nose or mouth.

But other experts contend that the guidance ignores growing evidence that a third pathway also plays a significant role in contagion.

They say multiple studies demonstrate that particles known as aerosols — microscopic versions of standard respiratory droplets — can hang in the air for long periods and float dozens of feet, making poorly ventilated rooms, buses and other confined spaces dangerous, even when people stay six feet from one another.

“We are 100% sure about this,” said Lidia Morawska, a professor of atmospheric sciences and environmental engineering at Queensland University of Technology in Brisbane, Australia.

She makes the case in an open letter to the WHO accusing the United Nations agency of failing to issue appropriate warnings about the risk. A total of 239 researchers from 32 countries signed the letter, which is set to be published next week in a scientific journal.

In interviews, experts said that aerosol transmission appears to be the only way to explain several "super-spreading" events, including the infection of diners at a restaurant in China who sat at separate tables and of choir members in Washington state who took precautions during a rehearsal.

WHO officials have acknowledged that the virus can be transmitted through aerosols but say that occurs only during medical procedures such as intubation that can spew large quantities of the microscopic particles. CDC officials did not respond to multiple requests for comment.

Dr. Benedetta Allegranzi, a top WHO expert on infection prevention and control, said in responses to questions from The Times that Morawska and her group presented theories based on laboratory experiments rather than evidence from the field.

"We value and respect their opinions and contributions to this debate," Allegranzi wrote in an email. But in weekly teleconferences, a large majority of a group of more than 30 international experts advising the WHO has "not judged the existing evidence sufficiently convincing to consider airborne transmission as having an important role in COVID-19 spread."

She added that such transmission "would have resulted in many more cases and even more rapid spread of the virus."

Since the coronavirus was first detected in China in December, understanding of how it spreads has evolved considerably, resulting in shifting guidelines regarding the use of masks.

At first, the WHO and CDC said masks were overkill for ordinary people and should be conserved for health workers. Later, the CDC recommended masks only for people with COVID-19 symptoms.

Then in April, after it became clear that people without symptoms could also spread the virus, the CDC suggested masks for everybody when physical distancing was difficult, a position the WHO eventually adopted.

Now as outbreaks proliferate and governors order a new round of closures, nearly all U.S. states have made face coverings mandatory or recommended them, primarily to prevent wearers from spreading the disease.

The proponents of aerosol transmission said masks worn correctly would help prevent the escape of exhaled aerosols as well as inhalation of the microscopic particles. But they said the spread could also be reduced by improving ventilation and zapping indoor air with ultraviolet light in ceiling units.

Jose Jimenez, a University of Colorado chemist who signed the letter, said the idea of aerosol transmission should not frighten people. "It's not like the virus has changed," he said. "We think the virus has been transmitted this way all along, and knowing about it helps protect us."

He and other scientists cited several studies supporting the idea that aerosol transmission is a serious threat.

As early as mid-March, a study in the New England Journal of Medicine found that when the virus was suspended in mist under laboratory conditions it remained "viable and infectious" for three hours, which researchers said equated to as much as half an hour in real-world conditions.

It had already been established that some people, known as "super spreaders," happen to be especially good at exhaling fine material, producing 1,000 times more than others.

A recent study found coronavirus RNA in hallways near hospital rooms of COVID-19 patients. Another raised concerns that aerosols laden with the virus were shed by floor-cleaning equipment and by health workers removing personal protective gear.

It was the outbreak among choir members in Mount Vernon, Washington — and a report about the incident in the Los Angeles Times — that first piqued the interest of several of the aerosol proponents. Of 61 singers at a March 10 rehearsal, all but eight became sick, despite the members using hand sanitizer and avoiding hugging or shaking hands. Two people died.

A team led by Shelly Miller, a University of Colorado professor of mechanical engineering, dug into church-hall blueprints, furnace specifications, locations of choir members and hours of attendance. The researchers diagrammed movements of the singer who was identified as the person who unwittingly brought the virus to practice.

Inhalation of aerosols "most likely dominated infection transmission during this event," the researchers wrote in a paper undergoing peer review, concluding that the ill person, who had symptoms similar to a common cold, was unlikely to have spent time within 6 feet of many singers or to have touched surfaces in common with them.

"We believe it likely that shared air in the fellowship hall, combined with high emissions of respiratory aerosol from singing, were important contributing factors," the paper said.

Eventually researchers from a broad spectrum of disciplines, including several who have studied the role of aerosols in the spread of the flu, SARS and other infectious diseases, joined forces to campaign for greater recognition of aerosol transmission.

They said that the coronavirus is less contagious through the air than measles but that the risk of transmission goes up the longer air remains stagnant and the longer people continue to breathe it.

In interviews, they said WHO officials had unfairly set a higher bar for showing aerosol spread than was required for acceptance of the other two pathways. "For them, droplets and touch are so obvious that they're proven, but airborne is so outlandish that it needs a very high level of evidence," Jimenez said.

Proof would require exposing large numbers of healthy people to aerosols emitted by COVID-19 patients, a study that scientists said would be unethical.

Donald Milton, a University of Maryland environmental health professor and an expert on aerosols who co-wrote the letter, said the average person breathes 10,000 liters of air each day.

“You only need one infectious dose of the coronavirus in 10,000 liters, and it can be very hard to find it and prove that it’s there, which is one of the problems we’ve had,” he said.