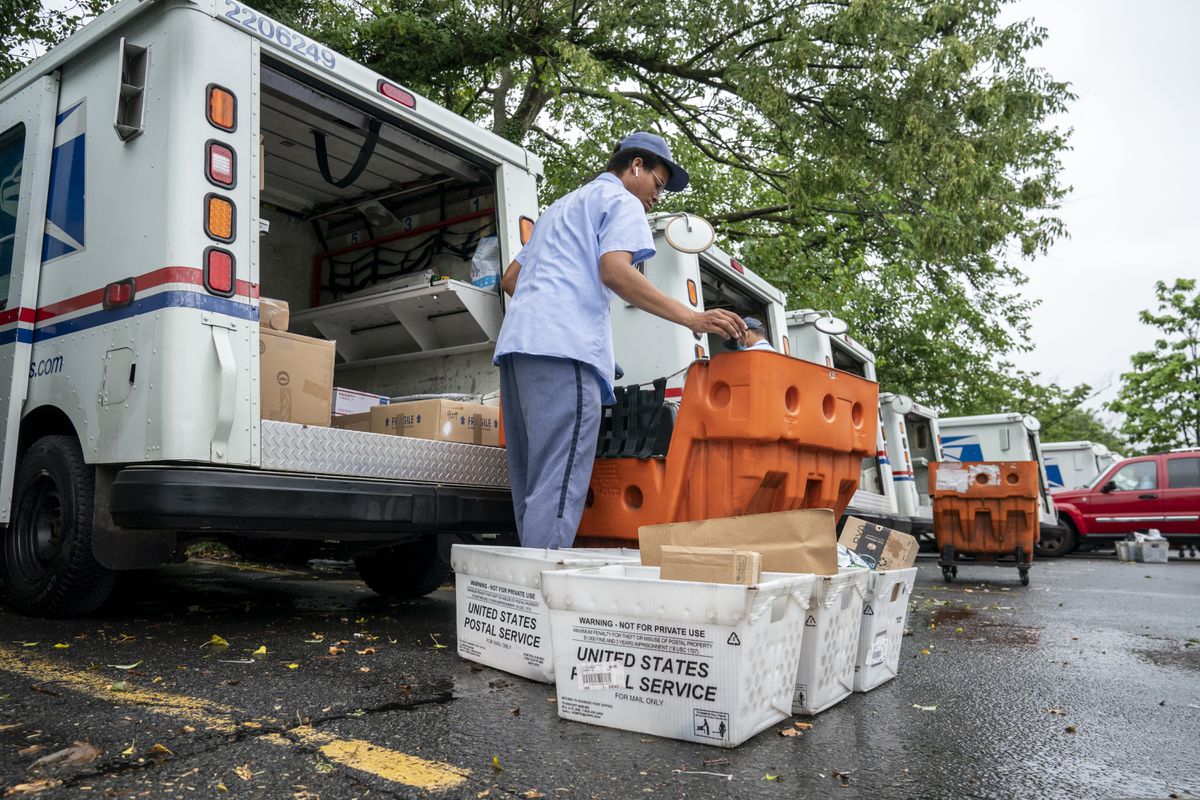 Letter carriers load mail trucks for deliveries at a U.S. Postal Service facility in McLean, Va., Friday, July 31, 2020. Delays caused by an increase in voting by mail may contribute to public doubts about the results. The public might not know the winner of the presidential race on Election Day because of a massive shift to voting by mail during the coronavirus pandemic. That’s because mail ballots take longer to count because of security procedures and laws in some states that limit when they can be processed. (AP Photo/J. Scott Applewhite)

Letter carriers load mail trucks for deliveries at a U.S. Postal Service facility in McLean, Va., Friday, July 31, 2020. Delays caused by an increase in voting by mail may contribute to public doubts about the results. The public might not know the winner of the presidential race on Election Day because of a massive shift to voting by mail during the coronavirus pandemic. That’s because mail ballots take longer to count because of security procedures and laws in some states that limit when they can be processed. (AP Photo/J. Scott Applewhite)

WASHINGTON — Postmaster General Louis DeJoy unveiled a sweeping overhaul of the nation’s mail service, displacing the two top executives overseeing day-to-day operations, according to a reorganization memo released Friday. The shake-up came as congressional Democrats called for an investigation of DeJoy and the cost-cutting measures that have slowed mail delivery and ensnared ballots in recent primary elections

Twenty-three postal executives were reassigned or displaced, the new organizational chart shows. Analysts say the structure centralizes power around DeJoy, a former logistics executive and major ally of President Donald Trump, and de-emphasizes decades' worth of institutional postal knowledge. All told, 33 staffers included in the old postal hierarchy either kept their jobs or were reassigned in the restructuring, with five more staffers joining the leadership from other roles.

The reshuffling threatens to heighten tensions between postal officials and lawmakers, who are troubled by delivery delays — the Postal Service banned employees from working overtime and making extra trips to deliver mail — and wary of the Trump administration’s influence on the Postal Service as the coronavirus pandemic rages and November’s election draws near.

It also adds another layer to DeJoy's disputes with Democratic leaders, who have pushed him to rescind the cost-cutting directives that have caused days-long backlogs and steady the Postal Service in the run-up to the election. DeJoy clashed with House Speaker Nancy Pelosi, D-Calif., and Senate Minority Leader Charles Schumer, D-N.Y., in a meeting on the issue earlier this week.

Rep. Gerald Connolly, D-Va., chair of the House subcommittee responsible for postal oversight, called the reorganization "a deliberate sabotage" to the nation's mail service and a "Trojan Horse."

David Williams, formerly chief operating officer and executive vice president, will take the role of chief logistics and processing operations officer, a step down for a trusted adviser to former postmaster general Megan Brennan and members of the agency's governing board. Kevin McAdams, the vice president of delivery and retail operations and a 40-year USPS veteran, was not listed on the chart.

It's not clear what the impact of all the changes will be. Dejoy wrote in an internal memo to employees obtained by The Washington Post that the new structure would create "clear lines of authority and accountability," but others are more skeptical.

"One of the things that's led to a lot of head scratching is how some of these folks have been reassigned. We're not sure he put the right players in the right spots, but maybe he sees something we don't," said one person with deep knowledge of the leadership team, who spoke on the condition of anonymity to give a candid assessment. "We're all going to wait and see and hope he's done the right things, but who knows? It looks as if most of the people we've all worked with for years and years are still there, just moved around."

The Postal Service will implement a hiring freeze, according to the reorganization announcement, and will ask for voluntary early retirements. It also will realign into three “operating units” — retail and delivery, logistics and processing, and commerce and business solutions — and scale down from seven regions to four.

The structure displaces postal executives with decades of experience, moving some to new positions and others out of leadership roles entirely, including McAdams, Williams and chief commerce and business solutions officer Jacqueline Krage Strako, who previously held the title of executive vice president and chief customer and marketing officer.

"As I said in the video remarks released on my first day, 'I am decisive, and . . . when I see problems, I work to solve them.' Early on, I concluded that our organizational structure was just such a problem to solve," DeJoy wrote in his memo to employees. "I have decided we need to realign the organization to provide greater focus on the core aspects of our business and to give us a better chance for future success."

But the changes worried postal analysts, who say the tone of DeJoy's first eight weeks and his restructuring have recast the nation's mail service as a for-profit arm of the government, rather than an essential service.

"He keeps referring to the USPS as 'our business.' But he's been appointed postmaster general. You don't run a business," said Philip Rubio, a professor of history at North Carolina A&T State University and a former postal worker. "He's not accountable to shareholders. He's accountable to the American people and Congress."

"Given the ongoing concerns about the adverse impacts of Trump Administration policies on the quality and efficiency of the Postal Service, we ask that you conduct an audit of all operational changes put in place by Mr. DeJoy and other Trump Administration officials in 2020," the letter states.

It also asks Whitcomb to review the finances of DeJoy and his wife Aldona Wos, the ambassador-nominee to Canada. The couple’s holdings include between $30.1 million and $75.3 million in assets in USPS competitors or contractors, according to a financial disclosure Wos filed with the Office of Government Ethics when she was nominated for the ambassadorship. Postal Service mail processing contractor XPO Logistics — which acquired DeJoy’s company New Breed Logistics in 2014 — represents the vast majority of those holdings. Their combined stake in competitors UPS and trucking company J.B. Hunt is roughly $265,000.

DeJoy had 30 days from taking over the agency to disclose any assets that present a conflict of interest, according to the Postal Service. DeJoy in a statement said he had "done what is necessary to ensure that I am and will remain in compliance with those obligations."

"We would welcome the Inspector General to look into the steps we are taking to make the Postal Service more efficient," Postal Service spokesman David Partenheimer said. "She will find that much of what we are doing is designed to address recommendations that her office has made in recent years."

Agapi Doulaveris, a spokesperson for the Office of Inspector General, said the department had received the letter, but could not comment on ongoing work.

"I would absolutely hope the inspector general would look into why the mail is being slowed, because that's outrageous," said Philip Rubio, a professor of history at North Carolina A&T State University and a former postal worker. "Especially during the pandemic and with America about to vote, this is the worst time to be changing policies."

DeJoy met Wednesday with Pelosi, Schumer, Treasury Secretary Steven Mnuchin and White House Chief of Staff Mark Meadows to discuss the new mail-handling procedures and the Postal Service's tenuous financial position. The agency is projected to run out of money between March and October 2021, though it just accessed a $10 billion Treasury loan authorized last week in an early coronavirus relief package.

During the USPS's quarterly board of governors meeting Friday, DeJoy said he negotiated the loan terms with Mnuchin. Upon accessing the loan, the Postal Service, subject to confidentiality restrictions, will hand over proprietary contracts for its 10 largest service agreements with private sector shippers. Those businesses use the mail service for "last mile" package delivery from distribution centers to consumers' homes or businesses.

In April shortly after Congress authorized the loan, Trump called the Postal Service "a joke" and said he would not approve any emergency funding unless the USPS quadrupled package delivery prices, a move analysts say would quickly bankrupt the agency by chasing away customers to private-sector competitors.

DeJoy, at the governors meeting Friday, said that though he has a “good relationship” with Trump — he’s donated more than $2 million to the Trump campaign or Republican causes since 2016, and chaired the finance committee for the 2020 GOP convention — he does not take direction from Trump on postal issues.

"While I certainly have a good relationship with the President of the United States, the notion that I would ever make decisions concerning the Postal Service at the direction of the President, or anyone else in the administration, is wholly off-base," he said. "I serve at the pleasure of the governors of the Postal Service, a group that is bipartisan by statute and that will evaluate my performance in a nonpartisan fashion."

Coronavirus funding for the Postal Service — and Schumer and Pelosi’s demand that DeJoy roll back the cost-cutting policies — emerged as a sticking point between Democrats and the White House in negotiations on a “Phase IV” relief package. The House passed a package with $25 billion for the Postal Service that does not need to be repaid to replace the Treasury loan. The Trump administration has objected to any direct aid to the Postal Service.