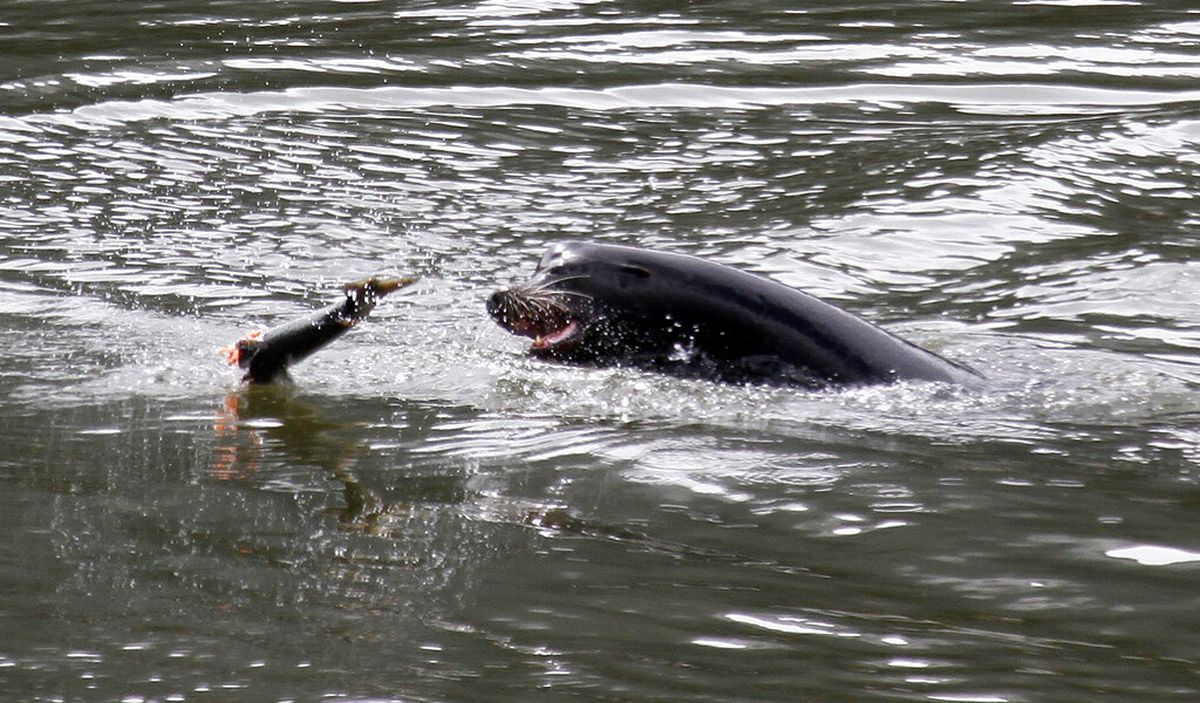 SEATTLE -- Approval to kill up to 840 sea lions in a portion of the Columbia River and its tributaries over the next five years to boost the survival of salmon and steelhead at risk of extinction is expected from federal officials Friday.

The kill program has been in the works since Congress approved a change in the Marine Mammal Protection Act in 2018, allowing sea lions to be killed to reduce predation on salmon and other species.

The legislation for the first time allows the killing of Steller sea lions, in addition to California sea lions, and makes any of the marine mammals fair game within a nearly 200 mile stretch of the mainstem Columbia and its tributaries, between Bonneville and McNary dams. Previously, only California sea lions that had been determined to be problematic predators of salmon were allowed to be killed to benefit fish recovery.

The program is sure to be controversial; nearly 22,000 comments received during public review of the program were opposed and fewer than 200 were for it. But a task force in May overwhelmingly recommended approval of a kill program. Barry Thom, regional administrator for the National Oceanic and Atmospheric Administration for the West Coast Region, is expected to approve an application to implement the program, which was submitted in June of last year from state and tribal fisheries managers.

Kill operations could begin at Bonneville Dam as soon as this fall.

Kassina Lee, regional director for Southwest Washington for the Washington Department of Fish and Wildlife is a member of the task force that voted yes. While work is ongoing to improve hatcheries, habitat, hydropower operations and reduce fishing impacts to benefit 13 runs of fish at risk of extinction in the Columbia and Snake Rivers, sea lions also are having an impact, she said.

“It is a wicked conservation problem,” Lee said.

For years, fish managers have tried nonlethal methods to haze and eliminate sea lions in the Columbia: Fire crackers and seal bombs, chasing them with boats, rubber bullets, screaming rockets, pingers, blasting orca whale calls, buckshot — and even long-haul relocation of salmon-munching sea lions didn’t work. They swam right back, as far as 100 miles in three days to keep chowing down.

California sea lions have been killed for preying on salmon under previous control programs, but nothing at this scale has been implemented before. Under the new program, it’s open season for government fish managers under the permit on any sea lion anywhere in the kill zone, any time of year, and in any number, up to a maximum of 300 Steller sea lions, and 540 California sea lions within the five years of the operation.

Training and new equipment will be needed to handle Steller, which are more aggressive and bigger — up to 2,500 pounds — than California sea lions, Lee said.

Use of firearms is prohibited. Instead, a combination of trapping and darting would be used, with the kill administered by lethal injection of tranquilizing drugs. The intended goal is humane euthanasia.

But it won’t be pretty: poles, gaffs, squeeze traps, cages and more will be needed to isolate, contain, restrain, kill and remove the animals from what is their natural habitat. The sea lions are after all only doing what comes naturally, as they follow succulent salmon to dams that create bottlenecks that make the fish easy pickings.

“It’s like fish in a barrel, you could say,” said Tim Ragen, former executive director of the federal Marine Mammal Commission, and another task force member who voted to approve the program.

But this can only be one step in a larger, wholistic and intensified effort to recover salmon in the Columbia, said Ragen, up to and including removal of dams to help salmon.

“Nobody likes to make a decision that says yes we need to remove some of these animals,” Ragen said of the sea lions. “What we are seeing is the need to reduce the predation on these runs on salmon so they can survive.”

Ragen said he cast his vote “with caveats.”

“It was yes, but don’t forget to turn attention to the more important and bigger problems,” he said. “I worry this will be the end of it.”

Sharon Young is senior strategist for marine wildlife for the Humane Society of the U.S. She voted against the program. “You can’t kill your way out of this problem,” she said of 13 dwindling fish runs on the Columbia and Snake.

Kill these sea lions, and more will just take their place, as other factors continue to push salmon into extinction, she said.

“It is not going to make any difference, and you will have killed animals for nothing,”Young said. “We tend to knee-jerk turn to some lethal solution to a conflict with any predator. But it doesn’t work without wiping out the population.”

The Marine Mammal Protection Act was passed by Congress in 1972 after seals, sea lions and others animals were hunted nearly to extinction in part because of conflicts with fisheries, she noted.

The protection act has been a spectacular success, re-wilding the Salish Sea and coast of Washington with more whales, sea lions, harbor porpoise, seals and orcas — other than southern resident orcas that frequent Puget Sound and feed on dwindling fish runs — than have been seen in a generation.

But the marine mammal boom is too much of a good thing, salmon managers say, with sea lions taking a significant bite out of the survival of threatened and endangered fish in the Columbia.

The Oregon Department of Fish and Wildlife killed 33 sea lions at Willamette Falls in 2019, Lee noted, and that single action dropped predation on winter steelhead at risk of extinction from 25% of the run in 2018, to 7% in 2019 — and just 1 to 2% in 2020, Lee said. That translates to about 1,377 steelhead saved out of a total run of 5,510, and a significantly lower risk of extinction.

“We hope and expect to see similar benefit to other salmon stocks in the application area,” Lee said of the kill program.

The Washington Legislature provided $462,000 for the program in the biennial budget approved last spring, contingent on the permit being approved. A total of $300,000 in federal funds is also budgeted for the program, divided between Oregon and Washington.