McConnell pledges to hold vote for a nominee, but Senate pushback looms 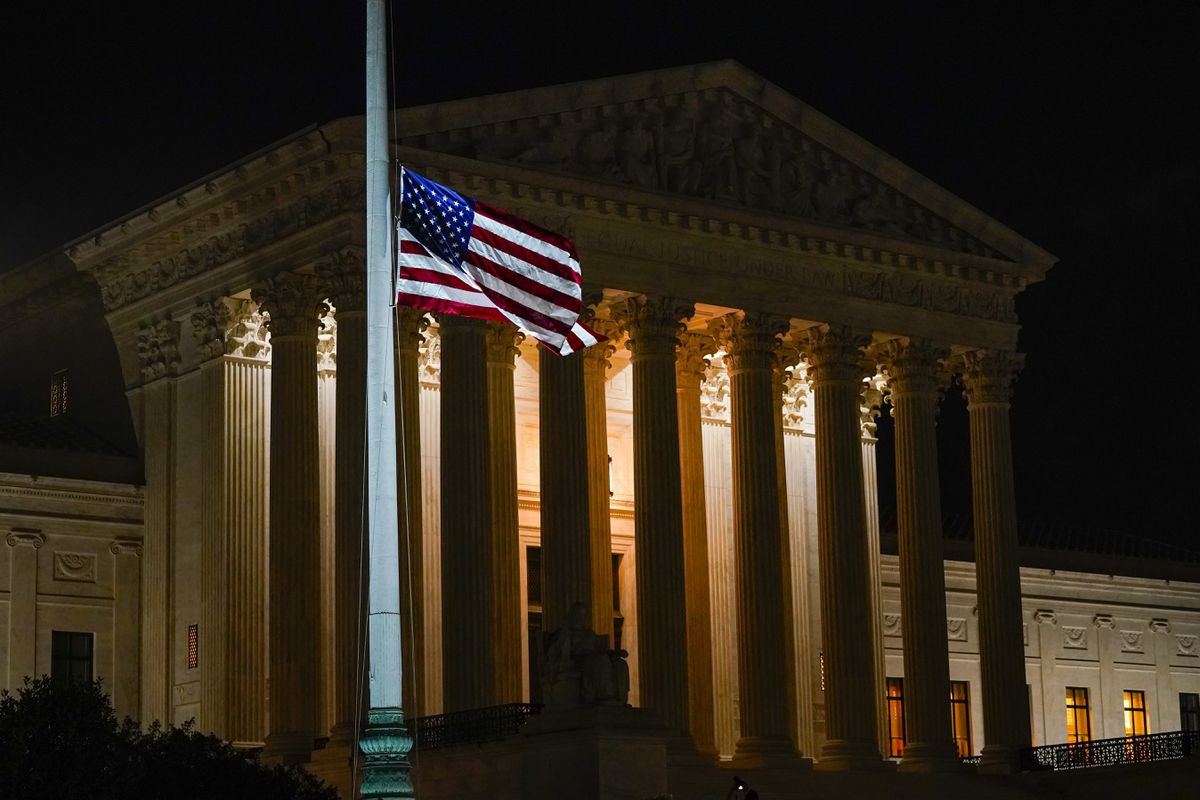 The American flag blows in the wind after it was lowered to half-staff Friday, Sept. 18, 2020, in Washington, after the Supreme Court announced that Supreme Court Justice Ruth Bader Ginsburg has died of metastatic pancreatic cancer at age 87. (AP Photo/Alex Brandon)

The American flag blows in the wind after it was lowered to half-staff Friday, Sept. 18, 2020, in Washington, after the Supreme Court announced that Supreme Court Justice Ruth Bader Ginsburg has died of metastatic pancreatic cancer at age 87. (AP Photo/Alex Brandon)

WASHINGTON - Senate Majority Leader Mitch McConnell, who has made judicial confirmations a hallmark of his legacy, is now confronting an extremely fraught Supreme Court fight that will challenge his pledge to leave no vacancy behind amid charges of hypocrisy and as his party’s control of the Senate hangs in the balance.

“Americans reelected our majority in 2016 and expanded it in 2018 because we pledged to work with President Trump and support his agenda, particularly his outstanding appointments to the federal judiciary,” McConnell said in a statement Friday following the death of Justice Ruth Bader Ginsburg. He added: “President Trump’s nominee will receive a vote on the floor of the United States Senate.”

In early 2016, McConnell said he would not give Merrick Garland his confirmation proceedings because, he argued, voters should get to decide through the presidential election. He has repeatedly reversed his own standard and said he would fill a vacancy under Trump, even in an election year.

His intent to move ahead came despite Ginsburg’s dying wish. In a posthumous statement released to NPR, Ginsburg said: “My most fervent wish is that I will not be replaced until a new president is installed.”

McConnell has rationalized his decision by saying the standards were different because the White House and the Senate were controlled by different parties in 2016, which is not the case this year.

But at least two GOP senators indicated in interviews before Ginsburg’s death that they would not support filling a Supreme Court vacancy so close to Election Day, pledging to uphold the standard crafted by McConnell that most Senate Republicans adhered to in 2016.

And in Arizona, where Democrat Mark Kelly has consistently been favored over incumbent GOP Sen. Martha McSally, the winner may be sworn into his or her term during the lame-duck session, altering the current 53-47 Republican control of the Senate if Kelly does prevail on Nov. 3.

Sen. Susan Collins, R-Maine, a perennial swing vote on contentious confirmation fights, told the New York Times earlier this month that she would not support voting to confirm a new justice in October, saying, “I think that’s too close, I really do.” Collins, who came under considerable scrutiny after supporting Justice Brett Kavanaugh’s 2018 nomination to the Supreme Court, is considered one of the most vulnerable Republican incumbents on the ballot this fall.

And in an interview with Alaska Public Media that occurred Friday ahead of the news of Ginsburg’s death, Sen. Lisa Murkowski, R-Alaska - another consistent swing vote - said she would not vote to confirm a justice before the election, either.

“I would not vote to confirm a Supreme Court nominee,” Murkowski said in the interview with Alaska Public Media. “We are 50-some days away from an election.” Aides to both women declined to confirm those remarks after the news of Ginsburg’s death.

In his statement Friday, McConnell pointedly did not lay out a timetable for the confirmation vote, namely whether he would try to hold it before the Nov. 3 elections or whether it would be in the final weeks of the year, before the swearing-in of a new Senate in January. And it is far from clear whether McConnell would be able to muscle through Ginsburg’s successor before the election.

McConnell circulated a letter among GOP senators late Friday, urging them all to “be cautious and keep your powder dry” on whether the Senate should process a nominee until Republicans return to Washington.

“For those of you who are unsure how to answer, or for those inclined to oppose giving a nominee a vote, I urge you all to keep your powder dry,” McConnell wrote in the letter, obtained by The Washington Post. “This is not the time to prematurely lock yourselves into a position you may later regret.”

Democrats were quick to jump on McConnell’s reversal from four years ago, as they pointed to McConnell’s reasoning in 2016 to hold up Obama’s final nominee to the Supreme Court.

“The American people should have a voice in the selection of their next Supreme Court Justice,” Senate Minority Leader Charles Schumer, D-N.Y., said in a statement. “Therefore, this vacancy should not be filled until we have a new president.” That was precisely the same statement issued by McConnell on Feb. 13, 2016, shortly after the death of Justice Antonin Scalia.

Senate Judiciary Committee Chairman Lindsey Graham, R-S.C., a close Trump ally who is up for reelection this fall, said nothing about a timeline for holding confirmation proceedings for Ginsburg’s successor in his statement Friday evening.

“Justice Ginsburg was a trailblazer who possessed tremendous passion for her causes. She served with honor and distinction as a member of the Supreme Court,” Graham said. “While I had many differences with her on legal philosophy, I appreciate her service to our nation.”

In the past, Graham himself has said he would not support processing a nominee in a year when Trump was on the ballot.

“If an opening comes in the last year of President Trump’s term, and the primary process has started, we’ll wait to the next election,” Graham said at an event hosted by the Atlantic magazine in October 2018. He made similar remarks in March 2016, when he said if a Republican was elected later that year and a vacancy occurred in the last year of their first term, "you can say, ‘Lindsey Graham said let’s let the next president, whoever it might be, make that nomination.’ "

Ginsburg’s death took the already-contentious fight for control of the Senate to yet another level.

Vulnerable senators in key Senate races are likely to come under significant scrutiny on the Supreme Court, with the 2020 election certain to turn into a referendum on which party that voters want to nominate and confirm the liberal justice’s successor.

Republicans who decide to stand with McConnell on filling the vacancy are certain to be challenged about what they said in 2016 in blocking consideration of Obama’s choice.

“No Supreme Court nominee should be considered by the Senate before the next president is sworn into office,” Sen. David Perdue, R-Ga., said on the Senate floor in 2016.

Sen. Joni Ernst, R-Iowa, also said that year that voters should have a say.

“This is about the fact that we have a president who is moving out of his residency and we have a very, very significant election coming up where we want the people to speak out. We want to hear their opinion on this. They will do that by electing a new president,” Ernst said.

Demand Justice, a liberal advocacy group created during the Trump presidency to boost Democratic involvement in the judiciary, plans to launch a $10 million ad campaign in an effort to ensure the seat does not get filled under after Inauguration Day 2021, according to an official familiar with the plans, who spoke on the condition of anonymity to discuss strategy.

Some Republican senators in closely watched races said Friday night that this Senate should go ahead and work to confirm Trump’s nominee this year.

Sen. Kelly Loeffler, R-Ga., who is facing not only a Democratic challenger but GOP Rep. Douglas Collins, R-Ga., in Georgia’s top-two Senate election process this year, said she would support Trump “in nominating a strict constructionist before the election.”

“This U.S. Senate should vote on President Trump’s next nominee for the U.S. Supreme Court,” tweeted McSally, another one of the most vulnerable Republican incumbents this fall.

Both women have not been elected to the Senate outright, instead appointed to their seats. Republicans are still favored to hold onto Loeffler’s seat, but a Kelly win in Arizona could have significant implications for confirming a nominee in a lame-duck session.

Because Kelly would fill an existing term, the Democrat could be eligible to fill the seat that was held by Republican John McCain as early as Nov. 30, according to Republican and Democratic elections lawyers who spoke to the Arizona Republic. A spokesman for Arizona Gov. Doug Ducey, a Republican, did not return a request for comment or clarification Friday evening.

On average, it has taken nearly 70 days to confirm a Supreme Court justice in the Senate, according to a 2018 report from the Congressional Research Service.