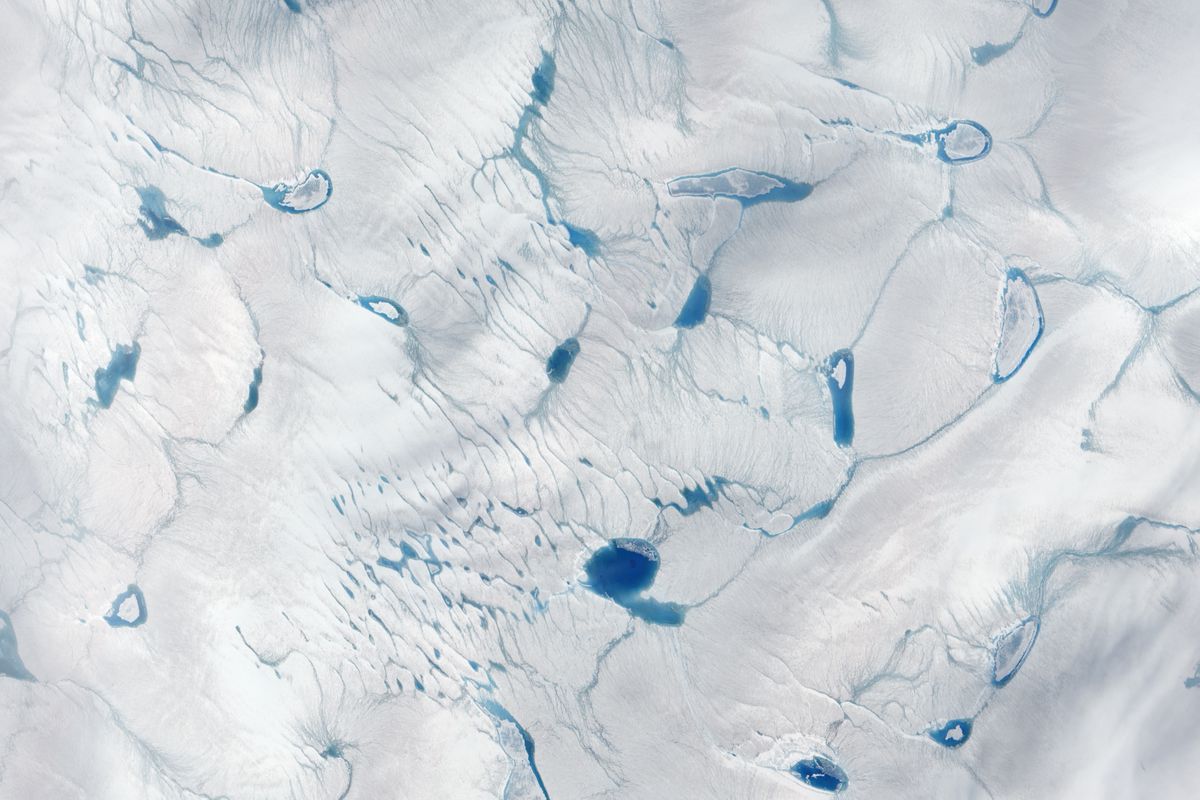 NASA Earth Observatory image of a portion of the Greenland Ice Sheet taken on June 16, 2016. (NASA)

NASA Earth Observatory image of a portion of the Greenland Ice Sheet taken on June 16, 2016. (NASA)

The Greenland Ice Sheet is on track to lose mass at about four times the fastest rate observed over the past 12,000 years. At its current clip, such melting would dump huge quantities of freshwater into the sea, raising global sea levels and disrupting ocean currents, scientists concluded in new research released Wednesday.

The new findings, published in the journal Nature, warn that the only way to avoid a drastically accelerated meltdown of the massive ice sheet in coming decades is for humans to curtail emissions of greenhouse gases soon.

Greenland is already the largest contributor to sea-level rise, though Antarctica has the potential to raise waters even more. As sea levels rise, coastal storms from hurricanes to nor’easters become more destructive. Recent trends in more frequent sunny-day flooding at high tide in places such as Annapolis, Md., Norfolk, Va., Charleston, S.C., and Miami are also linked to sea-level rise.

Researchers found that the current rate of mass loss from the Greenland Ice Sheet is already comparable to that seen at the end of the last ice age, during a geological period known as the early Holocene. At that time, the global average surface temperature was about 5.4 degrees (3 Celsius) above the preindustrial average, a temperature the world is on track to exceed by the end of this century, depending on the amount of global emissions.

“It is no secret that the Greenland Ice Sheet is in rough shape and is losing ice at an increasing rate,” said Jason Briner, a geology professor at the University of Buffalo and lead author of the new study, in a press release. “I think this is the first time that the current health of the Greenland Ice Sheet has been robustly placed into a long-term context.”

Briner and colleagues were able to put together an unbroken history of Greenland Ice Sheet mass change relying on computer modeling and field research in southwestern Greenland.

The researchers' projections show that after little change in ice mass loss over thousands of years, a sudden uptick occurred in recent decades. This steep rise is projected to accelerate through 2100 if humans fail to drastically cut the greenhouse gas emissions fueling the globe’s warming.

“We’re basically committed to losing ice at a faster clip than we did at that last period of rapid loss 12,000 years ago,” Briner said in an interview, “and that was for me a surprising finding.”

For the research, scientists relied on analyzing clues to the ice sheet’s past movement by studying the chemical composition of boulders that sit on large piles of debris located at the former edge of a glacier or ice sheet, known as moraines. The analyses enabled the scientists to determine when the ice was located there and when it retreated from the boulders.

The scientists compared their computer modeling results with the field work results to determine the accuracy of their projections into the future.

“To my knowledge, it’s the first evidence that shows that we are reaching levels of mass loss that are comparable to what happened last time when things were, so to say, bad - meaning massive sea level rise,” he said of the study, in which he was not involved.

Tedesco, who recently published a book called “The Hidden Life of Ice: Dispatches from a Disappearing World,” said the latest research suggests that the rapid melting unfolding in Greenland might merely be a precursor to more devastating and far-reaching changes to come. For instance, the ripple effects of ice loss in the Arctic influence oceans currents, low-lying communities and, in time, can impact melting on the other side of the Earth in Antarctica.

While such fundamental changes might still take decades or generations to play out, he said that the transformation will have increasing impacts in the present.

The new study’s projections are in line with findings from other recent research, which shows that Greenland is losing ice at an increasing rate. A study published last year in the Proceedings of the National Academy of Sciences, for example, showed that Greenland’s glaciers went from dumping about 51 billion tons of ice into the ocean between 1980 to 1990, to 286 billion tons between 2010 and 2018.

The result is that out of nearly 14 millimeters of sea-level rise in total caused by Greenland since 1972, half of it has occurred in the past eight years, researchers found.

The Arctic is the fastest warming region on Earth, warming at about three times the rate of the rest of the planet.

By combining records from satellites, gravity measurements, and other tools, scientists last year assembled a picture of the scale of Greenland’s ice loss over time. They found that from 1972 through 1990, Greenland was more or less in balance as it lost mass from glaciers that broke off or flowed out to sea, but also gained mass from annual snows. That pattern has come undone in the past 30 years.

Tedesco agreed that an unprecedented reduction in global emissions - along with aggressive investment in capturing and sequestering carbon dioxide that already is in the atmosphere - is the only opportunity to slow the rapid warming of the Arctic and the consequences that would bring.

“Imagine yourself with wide open arms in front of a tsunami and trying to stop it,” he said. “If we don’t stop what creates the tsunami, we can’t stop the freaking tsunami.”