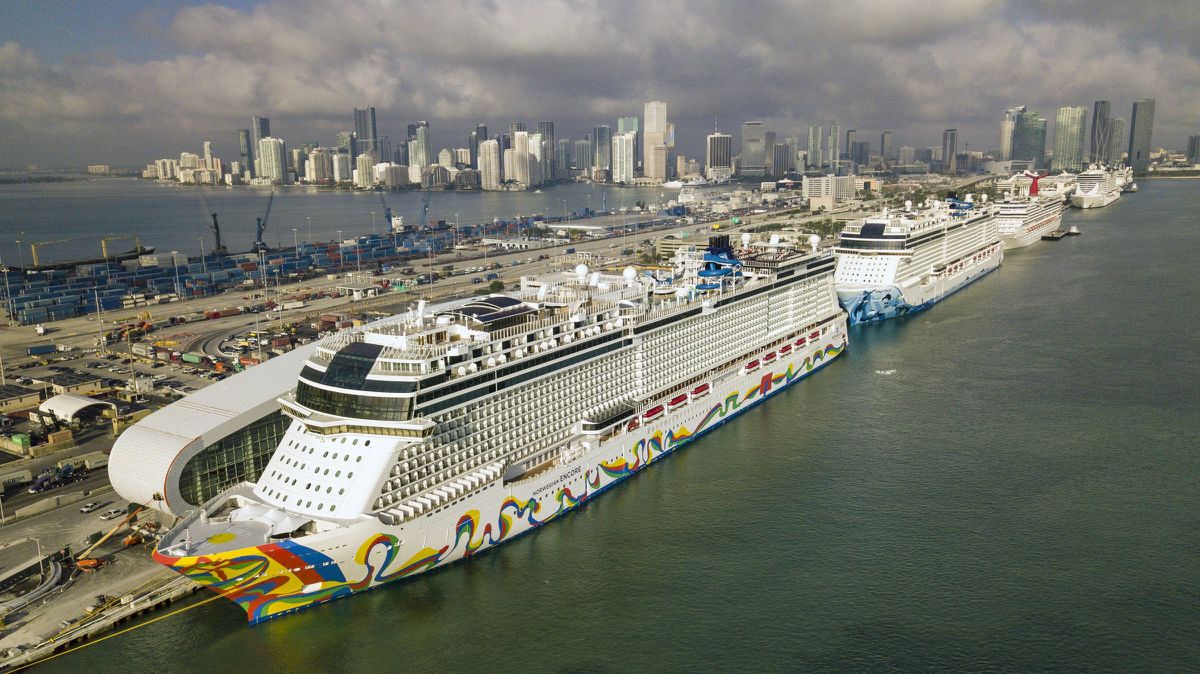 The Norwegian Encore cruise ship is docked at the Port of Miami on Thursday, March 26, 2020, in Miami, Fla. (Al Diaz/Miami Herald via AP)

The Norwegian Encore cruise ship is docked at the Port of Miami on Thursday, March 26, 2020, in Miami, Fla. (Al Diaz/Miami Herald via AP)

MIAMI -- The Centers for Disease Control and Prevention’s no-sail order for cruise ships will expire Oct. 31 — over the objections of the CDC’s director, according to a report by the news outlet Axios.

According to Axios, CDC Director Robert Redfield wanted to push the ban on cruises to February but was overruled during a meeting Tuesday with Vice President Mike Pence in the White House Situation Room. The ban was set to expire Wednesday without an extension.

Cruising in U.S. waters has been banned since March due to the COVID-19 pandemic. According to a Miami Herald investigation, more than 3,800 cases of COVID-19 and 110 deaths have been linked to 86 oceangoing ships, or one-third of the global cruise fleet.

The cruise companies have published plans they say will prevent much of the passenger and crew deaths, hospitalizations and stranded ships the industry experienced in the fall and summer, but the CDC has not yet allowed them to resume passenger operations.

Cruise companies have laid off much of their land-based workforce in Florida and elsewhere, and businesses that support the industry — longshoremen, shuttle companies, travel agents — have had their hours reduced or eliminated completely.

This month the cruise industry, in conjunction with state and local politicians, stepped up its effort to pressure the CDC to allow cruises to restart in the U.S., the industry’s most lucrative market. Carnival Corporation and MSC Cruises have already restarted cruises in Italy.

[What will cruising look like? Industry offers clues, but there’s still no timeline.]

On Monday, longshoremen and travel agents who have seen their hours cut or lost their jobs because of the industry shut down gathered at PortMiami’s Terminal D to urge the CDC to allow cruises to resume.

Longshoremen responsible for moving goods on and off the ships have suffered severe cuts in working hours. In June, 50 passenger-less cruise ships were still floating in and around U.S. waters and many were visiting PortMiami regularly to refuel and restock. Since then, all but 31 have left. Ships outside U.S. waters do not have to report onboard illnesses to the CDC, which began publishing illness data in June.

President of the Longshoremen’s International Association Local 1416 Torin Ragin said the workers are willing to do whatever it takes to get cruises started again. The union has been checking workers' temperatures before shifts since March.

“These lines have a lot at stake,” he said. “We are operating under the assumption that they don’t want to shut down again. They will use every precaution.”

Travel agent Jeannette Pineiro who runs a business at the port coordinating transportation and lodging for passengers and crew, said she has let go of her 350 employees. She said she received about $500,000 in federal aid through the Paycheck Protection Program, which lasted for six weeks. She estimates she will need about 15 days to get her business up and running again once the CDC gives the green light.

Earlier this month, executives from Carnival Corporation, Royal Caribbean Group, Norwegian Cruise Line Holdings and MSC Cruises and Miami-Dade commissioners urged the CDC to allow cruises to resume during a a public meeting. Commissioners did not ask the executives any questions about safety or lessons learned during the pandemic.

Last week, cruise companies Royal Caribbean Group and Norwegian Cruise Line Holdings sent the CDC a list of health and safety protocols the companies say they will implement, including requiring COVID-19 tests for passengers between 24 hours and five days before boarding. The cruise industry’s lobbying group, Cruise Lines International Association, sent a separate, less-specific list of recommendations to the agency.

Florida senators Marco Rubio and Rick Scott introduced a bill earlier this month to create a separate task force under the U.S. Department of Homeland Security charged with coming up with a plan to resume cruises.