Devastated by lockdowns, Hawaii’s struggling tourism industry pins its hopes on the first signs of reopening 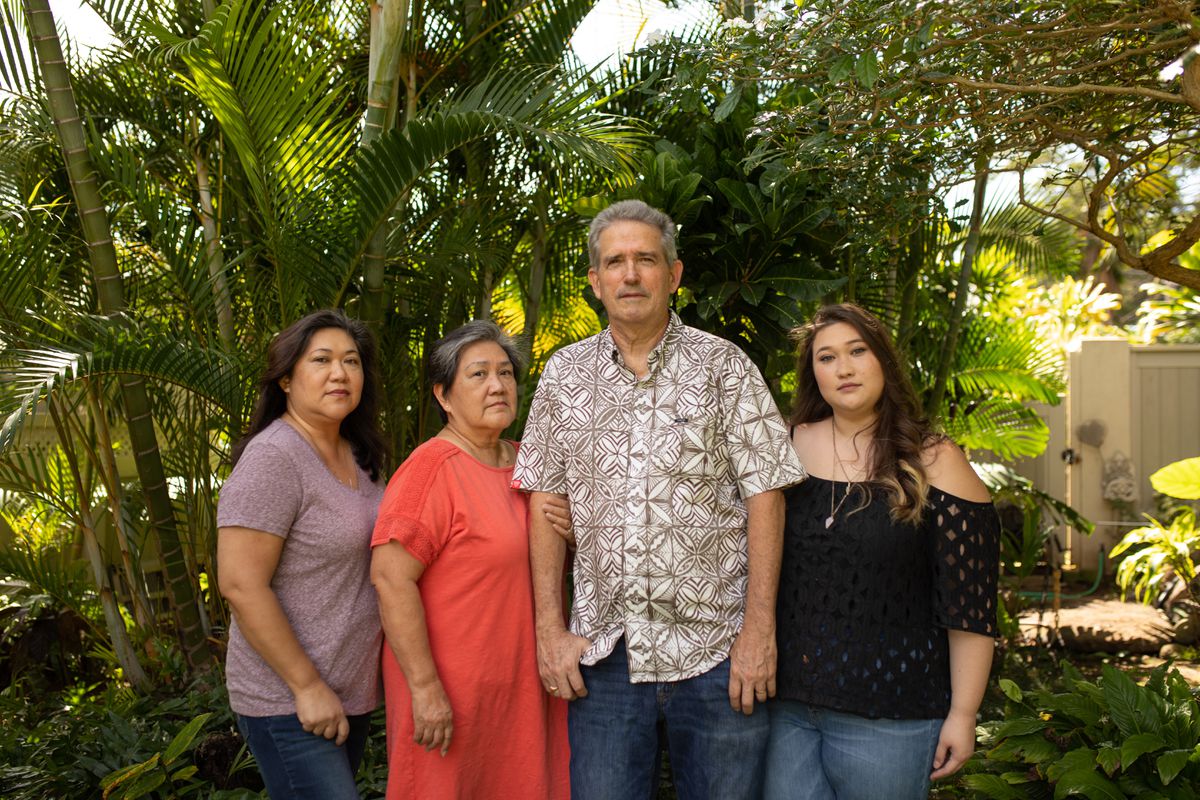 The last out-of-state guest left the Old Wailuku Inn at Ulupono on March 21.

On Thursday, 208 days later, the state of Hawaii reopens to tourists, and innkeepers Tom and Janice Fairbanks know it could take months for business to pick back up. But the cozy 10-room bed-and-breakfast near Maui’s northern coast has made it this far, temporarily closing for three months earlier in the pandemic, then reopening to a handful of locals at the end of June.

Now the inn is at a crossroads, thanks to the coronavirus crisis. While some parts of the U.S. economy are recovering faster than expected, the travel and tourism industries are falling further behind. Some hotels, restaurants and destinations that depend on tourism won’t survive, economists warn. And the future could go either way for the Old Wailuku Inn, beloved by globe-trotting travelers for the kind of intimate experiences that could be hard to come by in a socially distanced world.

“The sooner [tourists] come back, the better,” said Tom Fairbanks, 72. “Hopefully we’ll have enough money to cover all of our expenses. That would be wonderful. Everything else is just gravy. We’re hoping people will be traveling by Christmas, but I don’t know if they will or not. We have no idea.”

The bed-and-breakfast has four longtime employees, including Maria Guadalupe Duarte, who has worked there for more than 20 years. Duarte, 52, was laid off earlier in the pandemic and has since managed to scrape together about four hours of work each week.

No state’s economy has been hit harder by the coronavirus crisis than Hawaii’s. More than 1 in every 6 jobs on the archipelago vanished by August, Labor Department data shows. The state’s economic recovery has been stalled since June and now lags well behind that of every other state in the union. And unlike in other popular tourist spots, Hawaii’s woes stem from its remote geography and, until now, a mandatory 14-day quarantine for anyone entering the islands, preventing almost all tourism.

Hawaii was the only state to move in the wrong direction in August: It actually lost jobs, even as its mainland peers began to reopen and rehire.

“In many ways, Hawaii lives or dies by the amount of tourism we’re able to maintain,” Hawaii’s Lt. Gov. Josh Green told The Post. “We’ve long hoped we could diversify our economy, and we will always work toward that. . . . We went from being among the lowest unemployment [rates] in the country, and then we went to essentially the highest.”

But Fairbanks and Duarte are hopeful they’re headed for a turnaround. They’re eager to feed guests banana pancakes off the inn’s renowned breakfast menu and hear the familiar sounds of laughter on the property’s expansive gardens. And as Hawaii loosens its restrictions for incoming travelers, the inn, and by extension much of the state’s economy, faces its clearest test for recovery as the pandemic rages on.

Businesses like the Old Wailuku Inn have been desperate for officials to ease the quarantine on tourists. State officials, wary of triggering a spike in coronavirus cases, have repeatedly pushed back the reopening date, which was initially slated for Aug. 1. Starting Thursday, tourists can avoid the two-week quarantine if they test negative for the coronavirus within 72 hours of their final flight into Hawaii.

That’s a welcome change for Tom Fairbanks, whose family has lived in Hawaii for five generations since his great-great-grandparents came to the islands from Massachusetts as missionaries in 1833, and Janice, whose heritage in Hawaii traces back three or more generations. The couple bought the property in 1996 and worked for seven months to turn the historical home into an intimate bed-and-breakfast. Janice, 69, ran the inn herself for almost two decades.

The grounds and hotel’s interior were inspired by the writings of Don Blanding, the state’s unofficial poet laureate known for capturing Hawaii’s peaceful and vibrant beauty during the 1920s and 1930s. Guests would spend hours around the dining room’s communal table over family-style breakfasts. One regular business traveler booked more than 200 stays on Tuesday nights so she could always eat the banana pancakes on Wednesday’s menu.

When the pandemic forced the country into lockdown, the Fairbankses closed the inn on March 21. They soon laid off all four of their employees, including Duarte, and hoped the crisis would be short-lived.

The inn’s funding from the Paycheck Protection Program and Economic Injury Disaster Loans program, which helped keep employees on the payroll, ran out over the summer. The Fairbankses couldn’t afford to stay closed any longer, even though basically no one was traveling into Hawaii or between the islands. On June 23, the inn opened its doors to whoever might come - one or two locals a week.

“I don’t know what else we can do, so we’re just going to stick it out for as long as we can,” Tom Fairbanks said. “We’re not in a real strong position to hold out for another year. There’s no way. I’m sure that other people have the same experiences I’ve had. And some have given up. But I don’t give up.”

The inn’s struggles are playing out across Hawaii. Relative to its size, the state has faced more business closures than anywhere else in the nation - almost 1 in 4 businesses (23%) remained closed in September, according to the online review site Yelp. More than 2 in 5 of those closures are already permanent.

That state’s unemployment rate sat at 12.5% in August, Labor Department data shows. That’s almost 10 points higher than it was in February, which means the state has seen the nation’s largest increase in unemployment since the pandemic began.

The dire numbers reflect Hawaii’s overwhelming dependence on tourism. Before the pandemic, around 20% of its population worked in leisure and hospitality. Tourism was responsible for 47% of state revenue from food service, and 54% of retail revenue.

Yet the state has been slow to kick back into gear. An initial reopening date of Aug. 1 was pushed back to Sept. 1, and then Oct. 1, in response to rising coronavirus cases throughout mainland United States, and later within Hawaii itself.

Business owners, workers and industry leaders have warned that the delays will make the state’s economic turnaround that much more difficult, especially since a rebound depends on tourists feeling confident enough to book their next vacation. Requirements specific to different islands have left some travelers even more confused.

“Getting through the pandemic has been a horrific experience,” said Mufi Hannemann, president and chief executive of the Hawaii Lodging and Tourism Association. “However, getting the economy back on track is going to be doubly hard if we don’t set firm deadlines and dates that will start to reverse the trend.”

If that trend isn’t reversed, there’s even more at stake for Hawaii’s workforce, including Duarte, who has been working a slimmer schedule at the Old Wailuku Inn, nowhere near the amount of time she used to spend preparing food, cleaning guest rooms and doing laundry.

Duarte weathered the layoff with her one-time $1,200 stimulus check, plus the $600 in weekly enhanced unemployment benefits she received until that program expired July 31, on top of the state’s unemployment benefit. The aid helped cover new purchases to help her 16-year-old son learn remotely: a desk, chair, printer and Internet service. Duarte’s family has otherwise gotten by thanks to her husband’s job in construction, and the fact that the Fairbankses kept all of the inn’s employees on the company’s health insurance.

In the last week of September, more than 17% of Hawaii’s labor force was receiving unemployment benefits, again, the highest rate in the nation. Even more were receiving Pandemic Unemployment Assistance, an emergency program Congress passed to cover gig workers, the self-employed and contractors who have otherwise not normally qualified for traditional or jobless benefits.

As the inn stays open, Duarte doesn’t plan to look for other work. But she worries the career that has supported her for 20 years might not look the same in a coronavirus economy.

“I’d have to start over,” she said. “And the way things are now, it would be difficult to find another job.”

Even with Hawaii’s loosened restrictions, everyone expects it will take some time for travelers to return. Some Hawaiian hotels are even waiting to book rooms for a few more weeks or months to see if covid-19 cases stay under control. Green, Hawaii’s lieutenant governor, said hotels might reach an occupancy rate of 45% by March 2021.

Fairbanks said another PPP loan from Congress would help sustain the inn until tourism picks up momentum. Yet the White House and Congress have been at odds for weeks over another stimulus package, and it looks unlikely that there will be any deal before the Nov. 3 election. At times focus has centered on relief for the airline industry and $1,200 stimulus checks. Other proposals have included redirecting unused funding from the Paycheck Protection Program.

Federal Reserve Chair Jerome Powell has repeatedly called for more fiscal aid that can reach workers in industries that will take some time to recover, including travel, restaurants, hotels and entertainment.

“It also seemed likely that the sectors most affected by the pandemic - those relying on extensive in-person contact - would face a long and difficult path to recovery,” Powell said earlier this month at the National Association for Business Economics virtual annual meeting. “These sectors and people working in them would likely need targeted and sustained policy support.”

But businesses dependent on tourism have little time to wait. And the companies that do survive will likely confront a permanently changed industry.

For example, some companies may opt to automate jobs instead of bringing so many employees back, said Jan L. Jones, a professor in hospitality and tourism management at the University of New Haven in Connecticut. Hotels might scale back their housekeeping staff and look to robots that disinfect surfaces with ultraviolet light. Guests may prefer online or contactless check-in so they don’t have to interact with a front-desk attendant, Jones said. Larger hotels might space guests out by filling every other room.

Those kinds of investments tend to be more feasible for larger hotels or chains. And Jones said she worries about “the smaller companies that are the fabric [of their communities] that are really threatened right now, that are going away and never coming back.”

“The whole notion of a bed-and-breakfast is to bring people together and share local culture and share your family,” Jones said. “Nobody really wants to be around people they don’t know anymore.”

At the Old Wailuku Inn, the staff is undeterred. They spent weeks expanding outdoor dining. They brought in smaller tables to keep guests six feet apart in the dining room. Duarte knows her workdays will look different. On top of basic precautions like using gloves and a mask, she won’t be able to enter and clean guest rooms as frequently. She’ll leave breakfast outside of guests' rooms.

But Duarte is eager “to go back to the way we were here at work, to hear the laughs, the happy people.”

The Washington Post’s Samantha Schmidt and Andrew Van Dam contributed to this report.