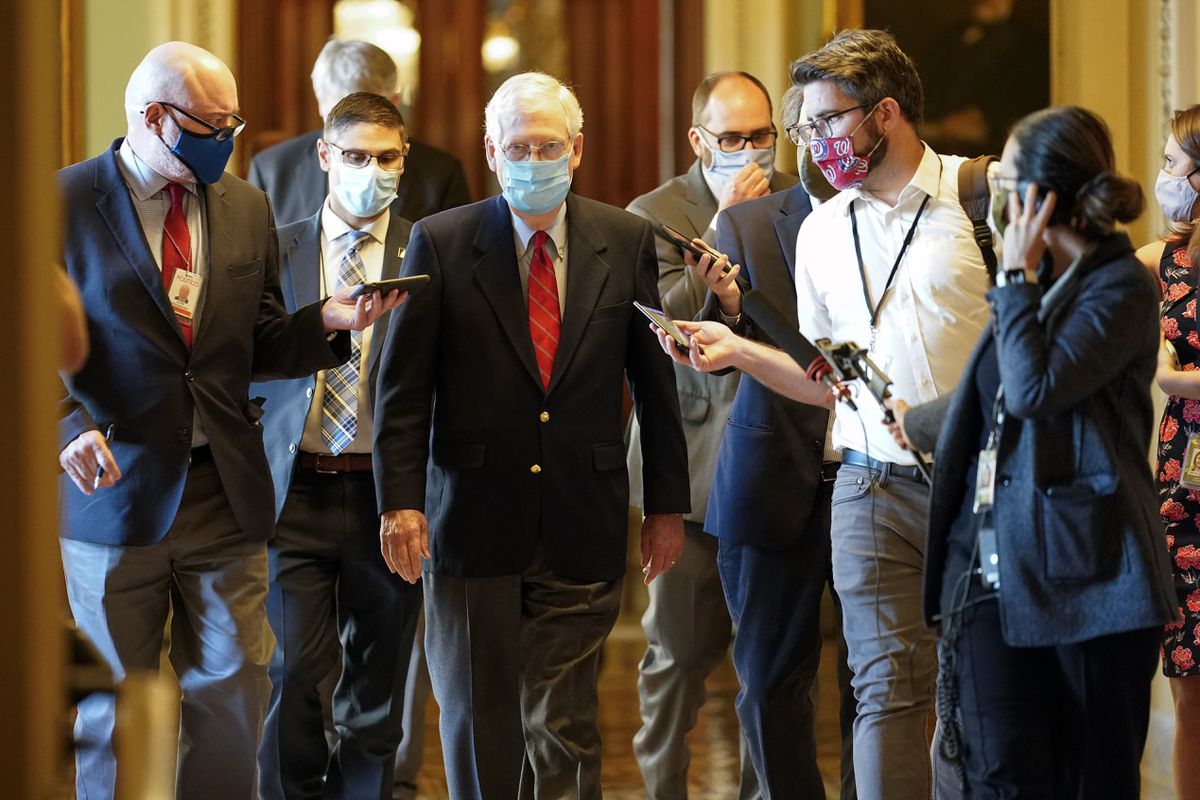 Senate Majority Leader Mitch McConnell of Ky., talks with reporters after he spoke on the Senate floor Monday, Nov. 9, 2020, at the Capitol in Washington. (AP Photo/Susan Walsh)

Senate Majority Leader Mitch McConnell of Ky., talks with reporters after he spoke on the Senate floor Monday, Nov. 9, 2020, at the Capitol in Washington. (AP Photo/Susan Walsh)

Senate Majority Leader Mitch McConnell and other Republicans on Monday backed President Donald Trump’s efforts to contest his loss to President-elect Joe Biden, despite the lack of evidence of significant fraud and sharp rebukes from election officials who defended the integrity of the vote.

McConnell, R-Ky., said from the floor of the Senate that the president is “100% within his right” to pursue recounts and litigation. McConnell did not repeat Trump’s baseless assertions that fraud had cost him the election, but he said he had met with Attorney General William Barr earlier in the day and supports the president’s right to investigate all claims of wrongdoing.

“We have the tools and institutions we need to address any concerns,” McConnell said. “The president has every right to look into allegations and request recounts under the law.”

Separately, Barr on Monday gave federal prosecutors a green light to pursue allegations of voting irregularities in certain cases before results are certified. The memo appeared to reverse previous Justice Department guidance that prosecutors generally should not take overt steps in cases involving alleged voter fraud until results are in and official.

Meanwhile, other GOP officials also rushed to bolster Trump’s case, including the two U.S. senators from Georgia, who demanded the resignation of Georgia Secretary of State Brad Raffensperger, a fellow Republican, after his office said there was no evidence of widespread fraud in the state.

And the Republican attorneys general of about a dozen states threw their support behind a legal effort pending before the U.S. Supreme Court to throw out mail ballots in Pennsylvania that were received after Election Day - a small number of votes that state officials said would not be enough to change the outcome.

Behind the scenes, Trump advisers and allies are increasingly resigned to a Biden victory, according to people familiar with internal discussions, who, like others interviewed for this report, spoke on the condition of anonymity to share private conversations.

But few so far are actively discouraging the president or his campaign from pursuing all legal paths to contest the results. Only a smattering of Republican senators have acknowledged Biden’s victory, and there has been little coaxing on the part of senior GOP lawmakers to help Trump come to terms with his loss. Some said there is value in ensuring the integrity of this year’s results, while others described a chaotic and scattershot operation that they hoped would eventually push Trump to cooperate in a peaceful transfer of power.

“What is the downside for humoring him for this little bit of time? No one seriously thinks the results will change,” said one senior Republican official. “He went golfing this weekend. It’s not like he’s plotting how to prevent Joe Biden from taking power on Jan. 20. He’s tweeting about filing some lawsuits, those lawsuits will fail, then he’ll tweet some more about how the election was stolen, and then he’ll leave.”

As a result, two starkly different tones prevailed throughout the day. Inside the White House, aides described a deflated president aware of the difficulty of reversing the outcome and even declaring plans to run again in 2024. But publicly, Trump fired off tweet after combative tweet asserting without evidence that results in Georgia, Wisconsin, Pennsylvania and Nevada had been illegally rigged against him. And his campaign announced at least one new federal lawsuit, in Pennsylvania, seeking to block state officials from certifying the results.

“Pennsylvania prevented us from watching much of the Ballot count,” Trump tweeted despite extensive reporting, and some live feeds, showing poll watchers had access. “Unthinkable and illegal in this country.”

Since Election Day, the Trump campaign and GOP allies have made claims of election irregularities in six states where Biden holds the lead in the vote count. But they have yet to prove any widespread fraud and have largely suffered defeat in courts.

And much of the legal activity Monday recycled previously dismissed allegations. The new Pennsylvania suit filed by the Trump campaign alleged - again - that some counties had improperly allowed voters to fix problems on mail ballots, a claim that was thrown out last week. It also falsely claimed that observers were not allowed to watch the processing and counting of ballots.

Trump aides, who spoke on the condition of anonymity to talk candidly, said there was little expectation inside the campaign that litigation would overturn Biden’s win - and said advisers have told Trump this directly. But they also said the campaign will pursue the cases to their conclusions, in part to sustain an argument about the risks of voter fraud. The campaign has also urged allies to publicly encourage people to report evidence or firsthand accounts of suspicious voter activity.

The campaign’s top two officials, Bill Stepien and Justin Clark, met with the staff at their Arlington headquarters Monday and urged them to keep fighting, officials said, adding that campaign leaders were closely watching who was still showing up.

But further complicating their effort: David Bossie, tapped to lead the campaign’s legal effort, tested positive for the coronavirus, according to a person familiar with the situation.

It was clear Monday that the campaign’s strategy was at least as much about rhetoric as it was about legal tactics. Clark, the deputy campaign manager, and others spent the weekend assembling a plan - and a messaging strategy - for various states, officials said. The campaign also sent out “talkers” - talking points - that included such suggestions as “This election is far from over,” “Joe Biden has not been certified as the winner of any states,” and “Legal votes decide who is president, not the news media.”

In Michigan, where Republicans have so far lost their legal challenges, a conservative nonprofit law firm filed a new suit asserting that ballots in Wayne County, home of Detroit, had been counted from voters not on the rolls and without verification of voter signatures, citing six signed affidavits. The suit also alleged that Republican poll watchers were not allowed to witness the counting, even though more than 200 GOP challengers were inside the counting room at the TCF Center in Detroit, where votes were counted last week.

“The allegations in this suit appear to be an exaggeration of routine situations that arise every election,” said Christopher Trebilcock, a longtime Democratic election lawyer in Michigan. “They either don’t understand the process or don’t care what the law actually provides.”

In Nevada, the Trump campaign and Republicans have already lost two attempts to get courts to order changes to ballot counting in Clark County, the state’s largest Democratic stronghold. State and federal judges rejected their demands for emergency intervention, citing a lack of evidence of any widespread voter fraud.

In response, Trump allies made a slew of new unsubstantiated allegations. On Sunday, Matt Schlapp of the American Conservative Union claimed “thousands of examples of voter irregularities,” including a “Biden-Harris van” at the Clark County vote-counting center in which ballots were “opened with letter openers, and ballots were filled in and resealed.”

Asked about the GOP’s various fraud allegations Monday, Clark County Registrar of Voters Joe Gloria said his office had forwarded allegations to the secretary of state for investigation. “If there’s anything that’s been done illegally unfortunately, we’re going to find it,” he said.

Gloria said he was confident in the election results. “We’ve had answers for every allegation that has been brought forward,” he said. “All we want to do is count votes.”

The office of Nevada Attorney General Aaron Ford, meanwhile, said no formal complaints had been filed to his office as of Monday evening.

In Georgia, a new level of intraparty hostility burst into view between Republicans who have questioned the election’s integrity and those who have publicly defended it.

Trump allies seized on the news that a small number of ballots had not been rescanned over the weekend in Fulton County, home of Atlanta. The news prompted a story from the conservative website Breitbart News - and a tweet from the president - suggesting that the additional ballots might alter the outcome. Critics also falsely accused Fulton County election officials of not allowing Republicans to watch the process.

In fact, only 342 ballots were affected, and the county invited members of both political parties to Atlanta’s State Farm Arena, the elections headquarters, to observe. Raffensperger, the secretary of state, also attended.

Gabriel Sterling, the voting system implementation manager at the Georgia secretary of state’s office, said claims of widespread illegal activity were false, declaring Election Day “an amazing success” and chastising those “trying to undermine the system that was put together” by state and county officials.

“There have been too many failures in Georgia elections this year and the most recent election has shined a national light on the problems,” Sens. Kelly Loeffler and David Perdue said in the statement, which did not list a single example of a problem. “The Secretary of State has failed to deliver honest and transparent elections.”

In a fiery response, Raffensperger said he would not step down and defended the election process as orderly and transparent.

“I know emotions are running high,” Raffensperger said. “Politics are involved in everything right now. If I was Senator Perdue, I’d be irritated I was in a runoff. And both Senators and I are all unhappy with the potential outcome for our President.”

Biden’s 11,595-vote lead in Georgia means the race is eligible for a recount, but Raffensperger emphasized that it was unlikely to change the outcome of the election.

“At this stage, I think the transition should be underway, even though it’s not finalized,” said Sen. Mitt Romney, R-Utah. “We want to make sure that the interests of national security and smooth transition is carried out.”