Pfizer and BioNTech apply for regulatory clearance of their coronavirus vaccine 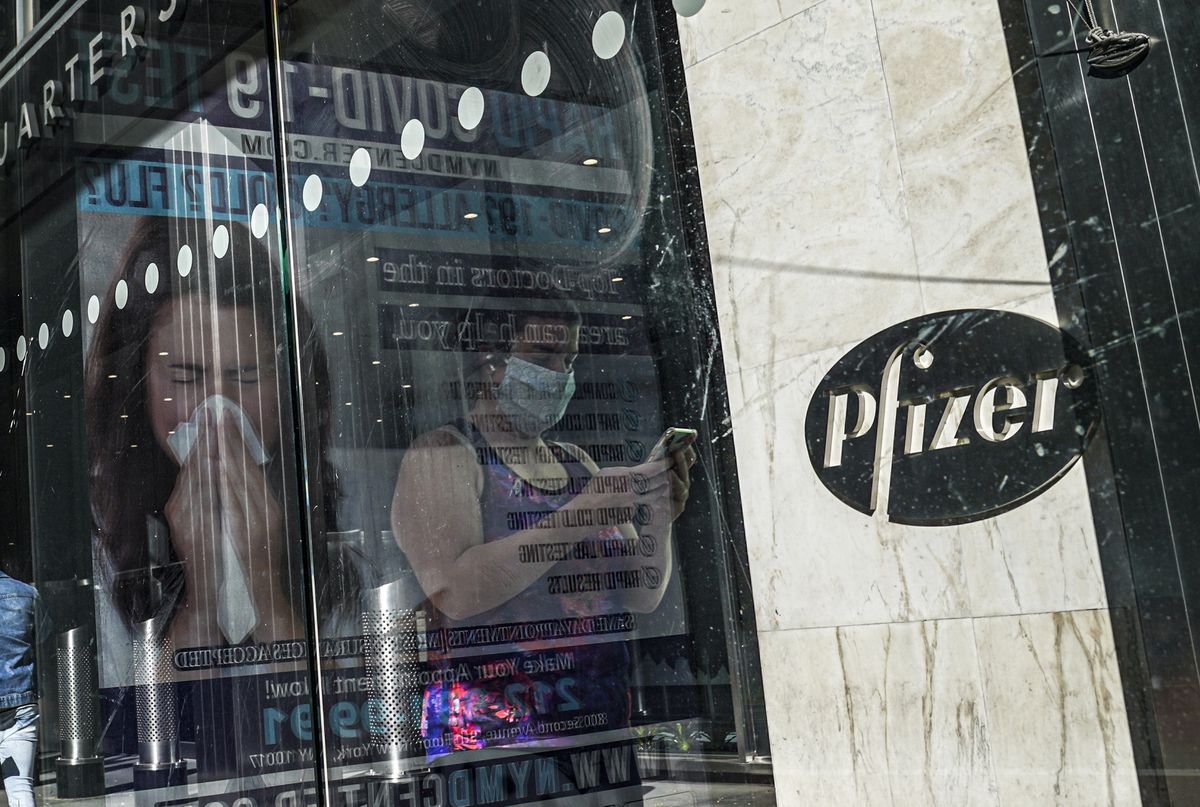 FILE - In this Nov. 9, 2020, file photo, an ad for COVID-19 testing reflects on glass at a bus stop, as pedestrians walk past Pfizer world headquarters in New York. On Friday, Nov. 20, 2020, Pfizer has asked U.S. regulators to allow emergency use of its COVID-19 vaccine, starting a process that could bring first shots as early as next month. (AP Photo/Bebeto Matthews, File)

FILE - In this Nov. 9, 2020, file photo, an ad for COVID-19 testing reflects on glass at a bus stop, as pedestrians walk past Pfizer world headquarters in New York. On Friday, Nov. 20, 2020, Pfizer has asked U.S. regulators to allow emergency use of its COVID-19 vaccine, starting a process that could bring first shots as early as next month. (AP Photo/Bebeto Matthews, File)

WASHINGTON — Pfizer filed for emergency authorization for its coronavirus vaccine Friday, capping a two-week period marked by blockbuster scientific advances against the pandemic but also by its ghastly toll: an additional 1.9 million people diagnosed with covid-19, the disease caused by the virus, and more than 16,000 deaths.

A record 196,000 cases of coronavirus were recorded in the United States on Friday alone. California set a new single-day high, surpassing a record from July 22. Also hitting a new high for the first time since late July was Louisiana, which reported 4,743 new cases.

The nation was on pace to reach 12 million cases since the pandemic began by Saturday, a mere six days after hitting 11 million.

The application from Pfizer and its German partner BioNTech came after data released on Nov. 9 showed that their vaccine was remarkably effective. A week later, biotechnology company Moderna announced similarly spectacular results. And federal regulators have cleared the first fully at-home test for the coronavirus and the first antibody treatment for covid-19.

The head-snapping mix of good and bad news left scientists and public health officials both delighted and angry. They note that the crash effort to develop and make vaccines, partly financed by a huge infusion of federal money and boosted by President Trump, has been a success. But the president, they say, sabotaged efforts to encourage lifesaving public health messages, such as mask-wearing, by disparaging health officials.

“The investment in vaccines has been a great triumph,” said Jason Schwartz, assistant professor of health policy at the Yale School of Public Health. “Where our national leaders failed was in trying to figure out what to do in the meantime, to provide consistent messages. Instead, we got muddled, disjointed, anti-science ideas that undermined public health strategies.”

Trump isn’t the first elected official to emphasize technology over public health steps during an outbreak. “Even during the 1918 flu, there was a love affair with the medical fix, the magic bullet, the potion,” Schwartz said.

But he and others say the administration has taken huge risks, and contributed to the death toll, by focusing so intently on vaccines and not promoting simple public health measures. The shots will be deployed in a massive and complex effort, one likely to hit snags and take longer than people expect, they say. And it will take months — probably at least the first half of 2021 — to vaccinate all demographic groups.

“With a massive increase in testing over the last 10 months, with [personal protective equipment] and medical supplies and equipment that are available to the American people, with the medicines and the therapeutics and, very soon, the vaccines that are available, America has never been more prepared to combat this virus than we are today,” Pence said.

No vaccine will arrive in time to alter the current surge of virus, as hospitals are overwhelmed, testing capacity is stretched and intensive care units fill with sick people — right before holidays that may seed even more outbreaks.

The challenge was on graphic display this week as the pandemic, which has claimed more than 253,000 American lives, raged across the country. More than 2,000 people died of covid-19 on Thursday alone.

The pace of the spread has been staggering: In the past month, the average daily caseload has nearly tripled. Hospitalizations are up by half in just the past two weeks.

“This is more cases, more rapidly, than what we had seen before,” White House coronavirus task force member Deborah Birx acknowledged Thursday as she stood in front of a U.S. map stained red with outbreaks from coast to coast. The Centers for Disease Control and Prevention implored people not to travel for Thanksgiving.

In hard-hit El Paso, Texas, the medical examiner posted a grim help-wanted ad Thursday, seeking workers to immediately help lift bodies at the morgue, which “is bracing for an increase in COVID deaths.”

The Midwest and Great Plains are being hit especially hard. The Dakotas continue to experience the highest per capita infection rates, following months when their governors steadfastly refused to issue mask mandates or implement other measures to arrest the spread.

North Dakota Gov. Doug Burgum, a Republican, abruptly reversed course and imposed a mask mandate last week, as did the Republican governor of New Hampshire on Thursday. But South Dakota Gov. Kristi Noem and a handful of other Republican leaders have continued to refuse.

Among them is Missouri Gov. Mike Parson, who reiterated Thursday that he opposed “mandates from this position to the people of this state.” That went for travel and holiday plans as well, he said. “Government has no business going through the front door of your homes,” he told a news conference. “The choice becomes yours.”

Public health leaders say, however, that the idea of allowing “personal responsibility” to dictate the government’s coronavirus response has clearly proved inadequate. St. Louis health director Fredrick Echols said in an interview Thursday that intensive care units in the city’s hospitals were operating at 90% capacity. They will need to move into triage mode — with doctors meting out care depending on who is most likely to survive — by Thanksgiving if the state’s fast-growing infection rate doesn’t slow.

Much of the problem, Echols said, stems from an influx of patients from more rural parts of the state where, unlike in St. Louis, there is no mask mandate. The average of daily cases across Missouri has doubled since the start of the month — it’s now above 5,000 — with the worst-hit counties reporting test positivity rates at 40% or higher. Statewide, more than 3,600 people have died — a number that is nearly twice the population of Missouri’s smallest county.

“You have some jurisdictions trying to follow the science and other jurisdictions that don’t see the benefit,” said Echols, a physician and communicable-disease expert.

“Yes, the restrictions are necessary. Yes, they will work. Yes, they are painful,” said Monto. But he said the measures are undermined when some leaders persist in thinking that the United States can muddle through with a hands-off approach to managing the virus.

“The ‘let ‘er rip’ policies that some people are advocating are really dangerous,” he said. “You’re going to have a lot of deaths.”

Pfizer’s filing with the Food and Drug Administration on Friday signals that a powerful tool to help control the pandemic could start to be available by mid- to late December. That news follows other upbeat developments: On Nov. 9, the FDA authorized the first antibody drug for COVID-19. On Monday, Moderna’s vaccine candidate clocked in with nearly 95% efficacy in an early analysis. And on Tuesday, Lucira Health’s All-In-One test kit became the first rapid, at-home test authorized by the FDA.

Now, the vaccine effort will move to its next, deliberative phase — a weeks-long process in which career scientists at the FDA scrutinize the data and determine whether the vaccine is safe and effective for a broad population. A committee of external advisers will meet Dec. 10 to make nonbinding recommendations to the agency on whether to authorize a vaccine for broader use.

“It is with great pride and joy, and even a little relief, that I can say our request for emergency-use authorization for a covid-19 vaccine is now in the FDA’s hands,” Pfizer chief executive Albert Bourla said in a video message shared by the company. “This is a historic day — a historic day for science and for all of us.”

An emergency authorization for a vaccine is typically a lower standard than full approval, but FDA guidelines are requiring that a vaccine be at least 50% effective, with a minimum of two months of safety data on half the trial participants.

Only after the FDA has given the green light will a first, limited group of high-risk people be able to access the shots. Government officials expect to have enough vaccine to inoculate about 20 million people with the two-dose regimen in the United States in December, between Pfizer and BioNTech’s vaccine and the shot developed by Moderna. The United States will receive about half of the 50 million doses Pfizer is aiming to produce by the end of the year.

There will probably be enough vaccine for 25 million to 30 million people a month in early 2021, according to Moncef Slaoui, chief scientific adviser of Operation Warp Speed, the federal initiative to speed up vaccine development.

Glimpses of the Pfizer data through news releases have so far exceeded expectations: The two-dose vaccine regimen was 95% effective at preventing disease in clinical trials and had no major safety problems, according to the company. It was 94% effective in people older than 65, a group of critical concern because older people are more likely to develop life-threatening illness after contracting the virus.

Pfizer and BioNTech are also submitting two months of follow-up data on 38,000 of the 44,000 people in the trial. They will present safety data on 100 children between 12 and 15 years old, a group they only recently began to include in their trial.

Through Operation Warp Speed, the federal government has given close to $11 billion to drug companies to take away the financial risk of research and development and secure doses of vaccine for the country. Pfizer and BioNTech did not accept federal funding for research but have a contract to provide 100 million doses of vaccine for $1.95 billion.

Amid other missteps, “the Trump administration got it right” on the vaccine effort, said Robert Wachter, chairman of the department of medicine at the University of California at San Francisco.

There are concerns, however, that the encouraging news about vaccines could backfire and make it harder to persuade people to participate in ongoing clinical trials that are needed to test other vaccine candidates, which will be critical in making enough vaccine for the entire population.

William Hartman, an anesthesiologist running a trial of the vaccine being developed by AstraZeneca at UW Health, the health system of the University of Wisconsin at Madison, said that about 20 times a day, he and others working on the trial are asked whether a volunteer could receive a different vaccine that receives authorization sooner. Recently, staff have had to scramble to fill slots that have opened because of last-minute cancellations.

Hartman said he fears that persuading people to volunteer for a trial in which they have a 50-50 chance of receiving a placebo could become even harder once any vaccine receives authorization.

“I do worry about the numbers declining, because it’s going to take way more than one vaccine or two vaccines to cover the population of the world,” Hartman said.

He is also worried that people hearing good news about a vaccine won’t be prepared for what is coming. In Dane County, Wis., where he works, coronavirus cases have exploded, matching in one month the total in the previous eight months. His hospital hasn’t run out of capacity, but it is a constant concern, particularly with Thanksgiving, Christmas and New Year’s likely to seed a new surge of cases.

“Even with this exciting news of these vaccines, it’s still going to be a dark couple of months here,” Hartman said. “There’s a lot of people who are going to be celebrating with their families and other people outside of their immediate bubble, and I think that a vaccine in no way is going to help with that right now.”