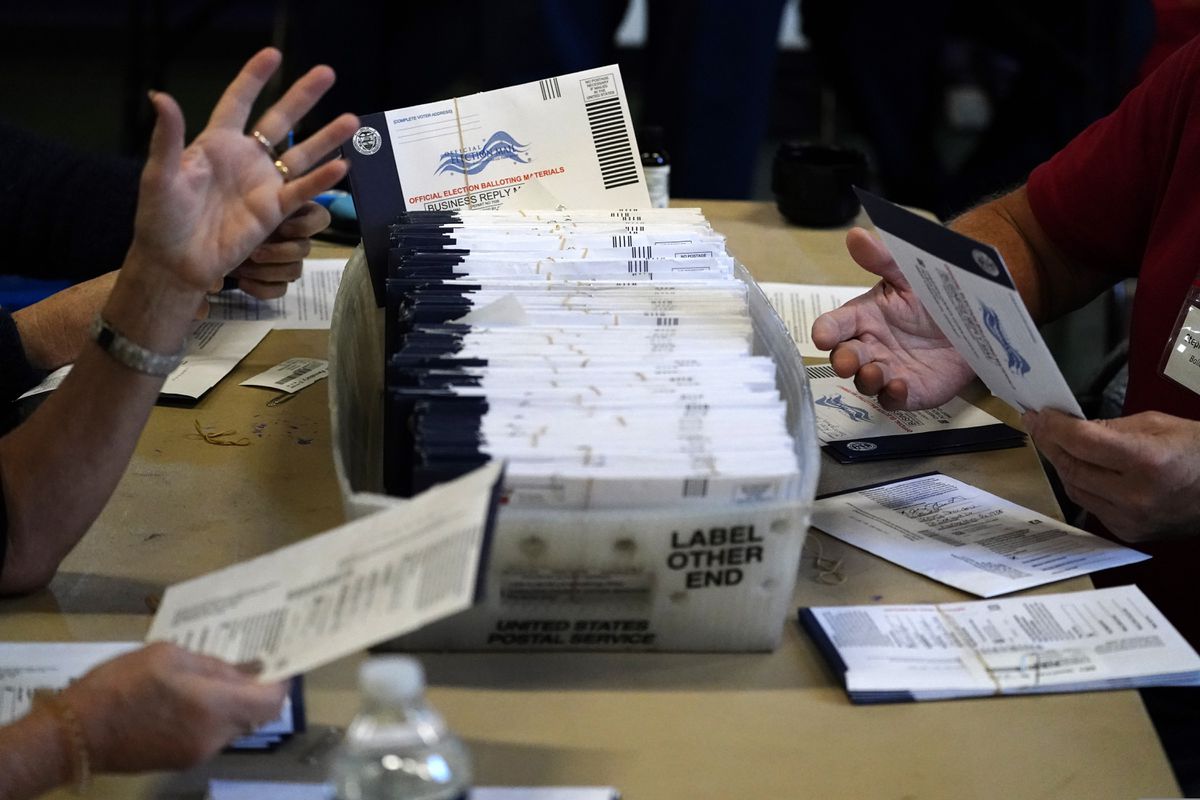 President Donald Trump and his allies faced a crush of defeats in post-election litigation Friday, a further sign of their ongoing failure to overturn President-elect Joe Biden’s victory through the courts and to gain traction through baseless claims of widespread fraud.

Just over a month after the Nov. 3 election, the Trump campaign and other Republicans suing over Biden’s win were dealt court losses across six states where they have tried to contest the results of the presidential race — Arizona, Georgia, Michigan, Minnesota, Nevada and Wisconsin.

Judges ruled decisively that Trump’s side has not proven the election was fraudulent, with some offering painstaking analyses of why such claims lack merit and pointed opinions about the risks the legal claims pose to American democracy.

“It can be easy to blithely move on to the next case with a petition so obviously lacking, but this is sobering,” wrote Justice Brian Hagedorn of the Wisconsin Supreme Court, agreeing with the court’s decision not to hear a lawsuit filed by a conservative group that sought to invalidate the election in that state.

“The relief being sought by the petitioners is the most dramatic invocation of judicial power I have ever seen,” added Hagedorn, who is part of the court’s conservative wing. “Judicial acquiescence to such entreaties built on so flimsy a foundation would do indelible damage to every future election. . . . This is a dangerous path we are being asked to tread.”

Two of the biggest defeats took place in Arizona and Nevada, where judges tossed full-scale challenges to the states’ election results filed by the Republican Party and the Trump campaign, respectively. Both judges noted in their opinions that the plaintiffs did not prove their claims of fraud.

In a detailed, 35-page decision, Judge James Russell of the Nevada District Court in Carson City vetted each claim of fraud and wrongdoing made by the Trump campaign in the state and found that none was supported by convincing proof. The judge dismissed the challenge with prejudice, ruling that the campaign failed to offer any basis for annulling more than 1.3 million votes cast in the state’s presidential race.

The campaign “did not prove under any standard of proof that illegal votes were cast and counted, or legal votes were not counted at all, due to voter fraud, nor in an amount equal to or greater than” Biden’s margin of victory, which was about 33,600 votes, Russell wrote.

During a court hearing Thursday afternoon, Trump campaign lawyer Jesse Binnall said the Nevada election had been “stolen” from Trump and claimed a “robust body of evidence” supported his conclusion.

Among its allegations, the campaign claimed that more than 61,000 people voted twice or from out-of-state.

In his ruling, Russell concurred with election officials and academic experts that there is no evidence for this, and specifically dismissed witness declarations that had been touted by the campaign, calling them “self-serving statements of little or no evidentiary value.”

The judge added that the campaign’s so-called expert testimony “was of little to no value,” and called a claim of ballot-stuffing in broad daylight — made by one anonymous person and not corroborated by anyone else — was “not credible.”

In a statement, the Nevada Republican Party said it intended to immediately appeal the ruling to the state’s highest court.

For his part, Nevada Attorney General Aaron Ford, a Democrat, cheered the decision and called on members of Trump’s team to submit a formal complaint of voter fraud to his office — accompanied by details and evidence.

“Absent such a complaint and supporting evidence, these claims of widespread voter fraud remain baseless,” Ford said in a statement.

“This election is over,” he added. “President-Elect Joe Biden and Vice-President Elect Kamala Harris won Nevada, and Nevadans can remain confident that their voices have been heard.”

The Trump campaign’s strategy of using the courts to change the result of the presidential election — which has involved dozens of lawsuits in six states — has so far been a complete failure, as lawyers for the president and his allies repeatedly failed to present credible evidence of wrongdoing that would justify invalidating millions of votes in swing states. Trump and his allies are approaching nearly 50 losses in four weeks, according to a tally by Democratic attorney Marc Elias.

In an interview with Fox Business Network’s Lou Dobbs Friday, Trump personal attorney Rudy Giuliani dismissed the Nevada loss, saying the campaign would appeal but that “Nevada’s not critical to us.” Instead, he said the campaign was pinning its hopes on efforts in Georgia, Michigan, Arizona and “boy, on Wisconsin.”

However, the Trump campaign already suffered defeat at the Wisconsin Supreme Court this week. And in federal court, District Court Judge Brett Ludwig expressed skepticism Friday about Trump’s arguments as he held an initial status hearing in a suit seeking to overturn Biden’s victory there.

While the hearing largely dealt only with setting a rapid schedule of filings and hearings next week, Ludwig — a Trump nominee who took the bench only in September — noted that the president has requested “extraordinary” relief.

He added that he had a “very, very hard time” seeing why Trump brought the action in federal court. Ludwig also termed a Trump request to “remand” the election back to the state legislature “bizarre.”

Meanwhile, in Arizona, Judge Randall Warner of the Maricopa County Superior County ruled Friday that he found “no misconduct, no fraud and no effect on the outcome of the election” in a suit brought by Arizona Republican Party and state party chairwoman Kelli Ward.

Warner found that GOP lawyers had identified nine mistakes during an inspection of 1,626 ballots that had been duplicated because the originals were damaged or could not be scanned. But those few errors did not amount to a widespread problem that cast doubt on Biden’s winning margin of more than 10,000 votes — or demanded the “extraordinary act” of annulling the more than 3.3 million votes cast by Arizonans, he ruled.

Ward is expected to appeal the ruling to the Arizona Supreme Court.

But other Republicans in the state have made clear the election is over. On Friday, the GOP speaker of the Arizona House firmly rejected calls from Trump’s campaign for the legislature to disregard the popular vote and declare Trump the winner of the state’s 11 electoral votes.

“As a conservative Republican, I don’t like the results of the presidential election. I voted for President Trump and worked hard to reelect him,” Speaker Rusty Bowers said in a statement. “But I cannot and will not entertain a suggestion that we violate current law to change the outcome of a certified election.”

The Trump campaign faced several other legal defeats around the country on Friday — including in Minnesota, where the state’s highest court dismissed a Republican lawsuit seeking to delay certification of the election results. Biden beat Trump there by more than 233,012 votes.

Despite the cascade of losses, Trump and his allies pressed forward with new cases. In Arizona, a second formal election contest was filed in state court Friday by a group of plaintiffs represented by the conservative Thomas More Society, the same organization whose request to overturn the election results was roundly rejected by Hagedorn, the Wisconsin judge, on Friday. The campaign also filed a new lawsuit in Georgia state court seeking to invalidate the state’s election results.