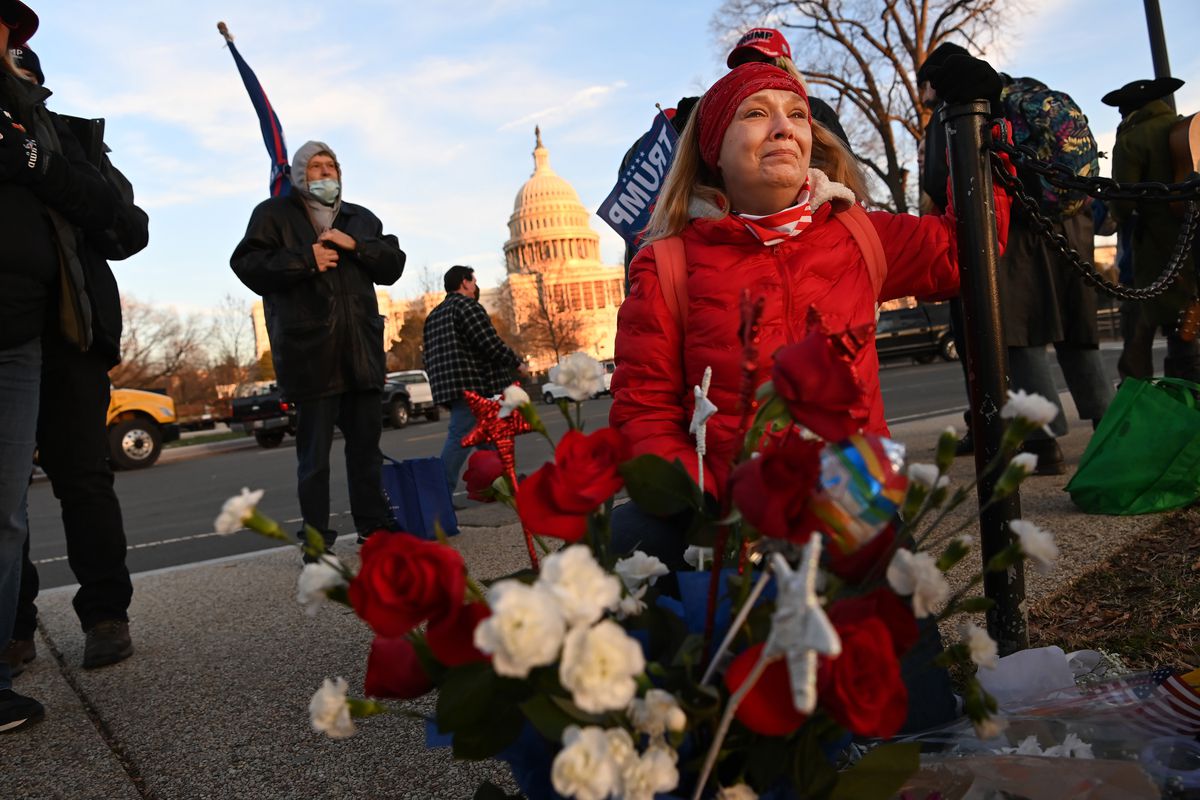 Melody Black cries on Thursday, Jan. 7, 2021, at a memorial for Ashli Babbitt outside the Capitol, where she was shot and killed in a riot the day before. Washington Post photo by Matt McClain

Melody Black cries on Thursday, Jan. 7, 2021, at a memorial for Ashli Babbitt outside the Capitol, where she was shot and killed in a riot the day before. Washington Post photo by Matt McClain

WASHINGTON - Shortly after a mob breached the Capitol on Wednesday, some in the group penetrated all the way to the Speaker’s Lobby, the hallway outside the House chamber, according to two law enforcement officials familiar with the incident.

The rioters tried to break through the lobby’s elaborate glass and wood doors, which had been hastily barricaded with chairs and other furniture, the officials said. Ashli Babbitt, wearing a Trump flag as a cape, tried to climb through a smashed glass pane in one of the doors.

In the chaotic scene, a U.S. Capitol Police officer in a suit and surgical mask pointed a gun in her direction and fired a single shot, the officials said. Babbitt, a 35-year-old California native and Air Force veteran, was struck in the neck and later died. The two officials, who spoke on the condition of anonymity because an investigation is ongoing, said she was unarmed.

It was unclear whether the officer, who works in the division that guards the House chamber, could see that, directly behind Babbitt and the cluster of trespassers with her, were other officers, with rifles in hand and in tactical gear, the officials said. They said a Capitol Hill staffer tried to help Babbitt after she fell.

During a day of rioting inside the Capitol that left offices vandalized and smoke wafting through hallways, the shooting was the most violent moment amid hours of unrest by a mob that overran security.

The circumstances surrounding the incident became clearer Thursday, as did the life of Babbitt, an ardent Trump supporter who traveled across the country from her home in the San Diego area to take part in the mayhem. Babbitt on Twitter referenced QAnon conspiracy theories and pushed baseless assertions that the November election was stolen from President Donald Trump.

“Nothing will stop us....they can try and try and try but the storm is here and it is descending upon DC in less than 24 hours....dark to light!” Babbitt tweeted the day before she died.

The Capitol Police announced Thursday that the officer involved in Babbitt’s killing had been placed on administrative leave as the department and District of Columbia police investigate the shooting. D.C. police probe all police shootings that occur in the city, even on federal grounds.

“The violent attack on the U.S. Capitol was unlike any I have ever experienced in my 30 years in law enforcement here in Washington, D.C.,” Capitol Police Chief Steven Sund said in a statement that came hours before it was announced he would resign later this month.

The statement was the first Capitol Police had made since the rioting. The statement did not say when the name of the officer involved in the shooting would be released, and a spokeswoman for the department declined to answer additional questions. Capitol Police do not have body-worn cameras.

House Sergeant at Arms Paul Irving, Sund’s boss, also stepped down after sharp criticism of the handling of the violence at the Capitol.

D.C. Police Chief Robert Contee did not offer additional details about the shooting at a news conference Thursday. Michael Sherwin, acting U.S. attorney for D.C., said his office is investigating.

“This is a tragic incident, and I send my condolences to the victim’s family and friends,” Contee said.

John Sullivan, a liberal activist, said in an interview broadcast on CNN’s “Anderson Cooper 360” that rioters were using flagpoles and other items to smash glass windows in the Capitol shortly before the shooting. Sullivan said Babbitt tried to make it through one of the windows in the barricaded doors into a part of the Capitol that had not been breached when the officer with the gun came out of a doorway.

“The second that she climbed through the window, she got shot right in the neck area, fell backwards,” Sullivan said in the interview. “I just remember the sense of shock and sorrow that somebody just died and did not need to die.”

In videos posted on social media, the Capitol Police officer is seen using a doorway as cover before he opens fire.

Babbitt is seen falling from the window frame to the floor as she is surrounded by Trump supporters and law enforcement officers with guns. In one video, officers shout at rioters to get back so Babbitt can be treated as she lies, sprawled out.

Timothy McEntee, Babbitt’s ex-husband, said she owned a pool-cleaning business and was outspoken. She listed herself as a libertarian on Twitter.

In one video posted to Twitter, Babbitt talks about liberal politicians and what she viewed as the negative impact of immigration on the U.S. economy. In another tweet, she called for Vice President Mike Pence to resign and to be prosecuted for treason, presumably for not being supportive enough of Trump’s calls to overturn the election.

“She’s a small-business owner in California and felt (much like others) that she was being wronged,” McEntee wrote in a text message.

In the days before the shooting, Babbitt retweeted a number of messages from demonstrators headed to D.C. for the protests on Wednesday. One read: “It will be 1776 all over again.... only bigger and better.”

McEntee said Babbitt loved the United States. She served on active duty for four years, with nearly six years in the Air National Guard, according to her service record provided to The Washington Post. Her last active-duty position was akin to a base police officer. She served in Iraq at least once.

Experts on police shootings said it will require more investigation to determine whether the shooting was justified. Joseph Giacalone, an adjunct professor at John Jay College of Criminal Justice and a retired New York City Police Department detective sergeant, said the chaotic nature of the incident will make a probe tricky.

“It’s going to be a very difficult justification investigation for sure,” Giacalone said. “You have a situation where the entire Capitol building is overrun and officers are severely outnumbered. Did he fear for his life?”

Ron Martinelli, a forensic criminologist and retired police officer, said that it was too soon to come to a conclusion about the shooting, but that it appeared “problematic.” He said the fact that Babbitt was crawling through a window pane was not reason enough to open fire.