Israel stages new round of heavy airstrikes on Gaza City 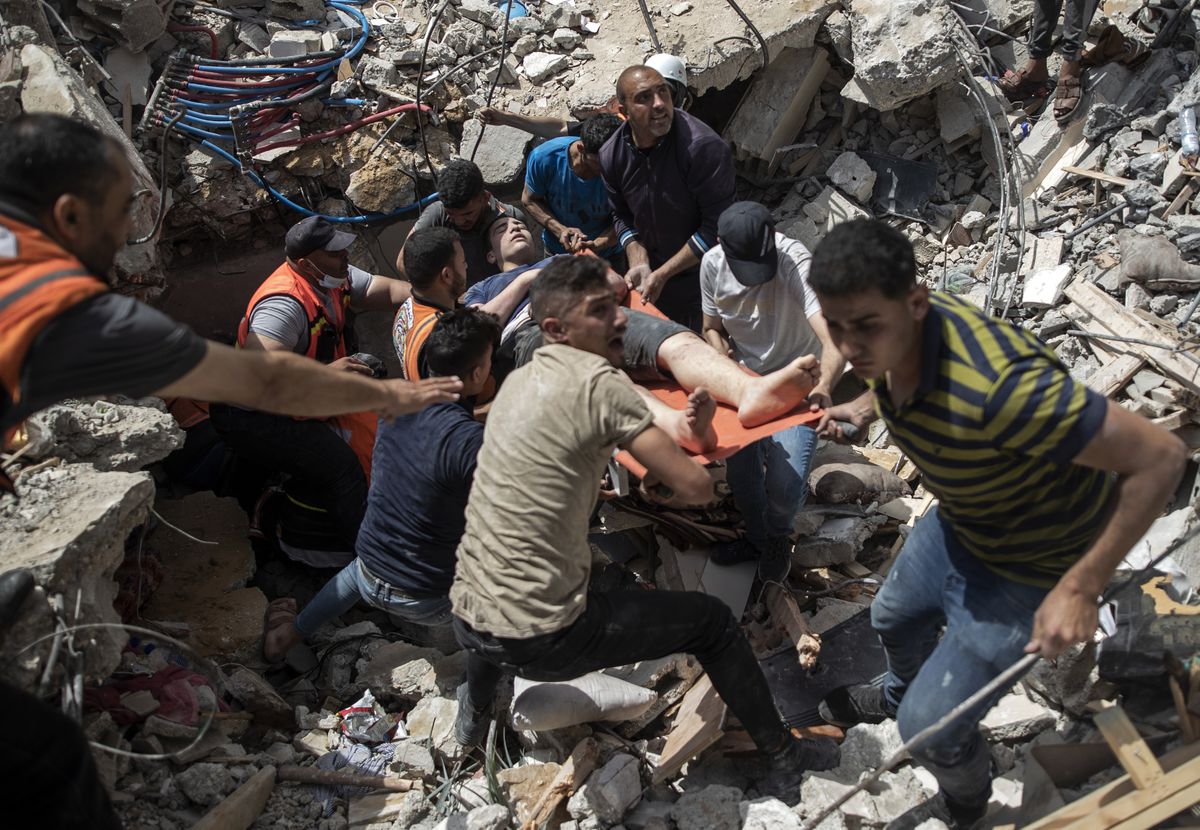 Palestinian rescue a survivor from under the rubble of a destroyed residential building following deadly Israeli airstrikes in Gaza City, Sunday, May 16, 2021. The Israeli airstrikes flattened three buildings and killed at least 26 people Sunday, medics said, making it the deadliest single attack since heavy fighting broke out between Israel and the territory's militant Hamas rulers nearly a week ago. (AP Photo/Khalil Hamra)

Palestinian rescue a survivor from under the rubble of a destroyed residential building following deadly Israeli airstrikes in Gaza City, Sunday, May 16, 2021. The Israeli airstrikes flattened three buildings and killed at least 26 people Sunday, medics said, making it the deadliest single attack since heavy fighting broke out between Israel and the territory's militant Hamas rulers nearly a week ago. (AP Photo/Khalil Hamra)

Explosions rocked the city from north to south for 10 minutes in an attack that was heavier, on a wider area and lasted longer than a series of air raids 24 hours earlier in which 42 Palestinians were killed — the deadliest single attack in the latest round of violence between Israel and the Hamas militant group that rules Gaza. The earlier Israeli airstrikes flattened three buildings.

Local media reports said the main coastal road west of the city, security compounds and open spaces were among the targets hit early Monday. The power distribution company said the airstrikes damaged a line feeding electricity from the only power plant to large parts of southern Gaza City.

There were no immediate reports of injuries.

In a televised address on Sunday, Netanyahu said Israel’s attacks were continuing at “full-force” and would “take time.” Israel “wants to levy a heavy price” on the Hamas militant group, he said, flanked by his defense minister and political rival, Benny Gantz, in a show of unity.

Hamas also pressed on, launching rockets from civilian areas in Gaza toward civilian areas in Israel. One slammed into a synagogue in the southern city of Ashkelon hours before evening services for the Jewish holiday of Shavuot, Israeli emergency services said. No injuries were reported.

In the Israeli air assault early Sunday, families were buried under piles of cement rubble and twisted rebar. A yellow canary lay crushed on the ground. Shards of glass and debris covered streets blocks away from the major downtown thoroughfare where the three buildings were hit over the course of five minutes around 1 a.m.

The hostilities have repeatedly escalated over the past week, marking the worst fighting in the territory that is home to 2 million Palestinians since Israel and Hamas’ devastating 2014 war.

“I have not seen this level of destruction through my 14 years of work,” said Samir al-Khatib, an emergency rescue official in Gaza. “Not even in the 2014 war.”

Rescuers furiously dug through the rubble using excavators and bulldozers amid clouds of heavy dust. One shouted, “Can you hear me?” into a hole. Minutes later, first responders pulled a survivor out. The Gaza Health Ministry said 16 women and 10 children were among those killed, with more than 50 people wounded.

Haya Abdelal, 21, who lives in a building next to one that was destroyed, said she was sleeping when the airstrikes sent her fleeing into the street. She accused Israel of not giving its usual warning to residents to leave before launching such an attack.

As a result of the strike, “the underground facility collapsed, causing the civilian houses’ foundations above them to collapse as well, leading to unintended casualties,” it said.

Among those reported killed was Dr. Ayman Abu Al-Ouf, the head of the internal medicine department at Shifa Hospital and a senior member of the hospital’s coronavirus management committee. Two of Abu Al-Ouf’s teenage children and two other family members were also buried under the rubble.

The death of the 51-year-old physician “was a huge loss at a very sensitive time,” said Mohammed Abu Selmia, the director of Shifa.

Gaza’s health care system, already gutted by an Israeli and Egyptian blockade imposed in 2007 after Hamas seized power from rival Palestinian forces, had been struggling with a surge in coronavirus infections even before the latest conflict.

Israel’s airstrikes have leveled a number of Gaza City’s tallest buildings, which Israel alleges contained Hamas military infrastructure. Among them was the building housing The Associated Press Gaza office and those of other media outlets.

Sally Buzbee, the AP’s executive editor, called for an independent investigation into the airstrike that destroyed the AP office on Saturday.

Netanyahu alleged that Hamas military intelligence was operating inside the building and said Sunday any evidence would be shared through intelligence channels. Neither the White House nor the State Department would say if any had been seen.

Asked if he had provided any evidence of Hamas’ presence in the building in a call Saturday with U.S. President Joe Biden, Netanyahu said: “We pass it through our intelligence people.”

Buzbee called for any such evidence to be laid out. “We are in a conflict situation,” Buzbee said. “We do not take sides in that conflict. We heard Israelis say they have evidence; we don’t know what that evidence is.”

Meanwhile, media watchdog Reporters Without Borders asked the International Criminal Court on Sunday to investigate Israel’s bombing of the AP building and others housing media organizations as a possible war crime.

The Paris-based group said in a letter to the court’s chief prosecutor that the offices of 23 international and local media organizations have been destroyed over the past six days. It said the attacks serve “to reduce, if not neutralize, the media’s capacity to inform the public.”

The AP had operated from the building for 15 years, including through three previous wars between Israel and Hamas. The news agency’s cameras, operating from its top floor office and roof terrace, offered 24-hour live shots as militant rockets arched toward Israel and Israeli airstrikes hammered the city and its surroundings.

“We think it’s appropriate at this point for there to be an independent look at what happened yesterday — an independent investigation,” Buzbee said.

The latest outbreak of violence began in east Jerusalem last month, when Palestinians clashed with police in response to Israeli police tactics during Ramadan and the threatened eviction of dozens of Palestinian families by Jewish settlers. A focus of the clashes was the Al-Aqsa Mosque, a frequent flashpoint located on a hilltop compound revered by both Muslims and Jews.

Hamas and the Islamic Jihad militant group have acknowledged 20 fighters killed in the fighting. Israel says the real number is far higher and has released the names and photos of two dozen alleged operatives it says were “eliminated.”

The assault has displaced some 34,000 Palestinians from their homes, U.N. Mideast envoy Tor Wennesland told an emergency meeting of the U.N. Security Council, where eight foreign ministers spoke about the conflict.

Efforts by China, Norway and Tunisia to get the U.N. body to issue a statement, including a call for the cessation of hostilities, have been blocked by the United States, which, according to diplomats, is concerned it could interfere with diplomatic efforts to stop the violence.

The turmoil has also fueled protests in the occupied West Bank and stoked violence within Israel between its Jewish and Arab citizens, with clashes and vigilante attacks on people and property.

On Sunday, a driver rammed into an Israeli checkpoint in the east Jerusalem neighborhood of Sheikh Jarrah, where Palestinian families have been threatened with eviction , injuring six officers before police shot and killed the attacker, Israeli police said.

The violence also sparked pro-Palestinian protests in cities across Europe and the United States.

Israel appears to have stepped up strikes in recent days to inflict as much damage as possible on Hamas as international mediators work to end the fighting and stave off an Israeli ground invasion in Gaza.

The Israeli military said it destroyed the home Sunday of Gaza’s top Hamas leader, Yahiyeh Sinwar, in the southern town of Khan Younis. It was the third such attack in the last two days on the homes of senior Hamas leaders, who have gone underground.