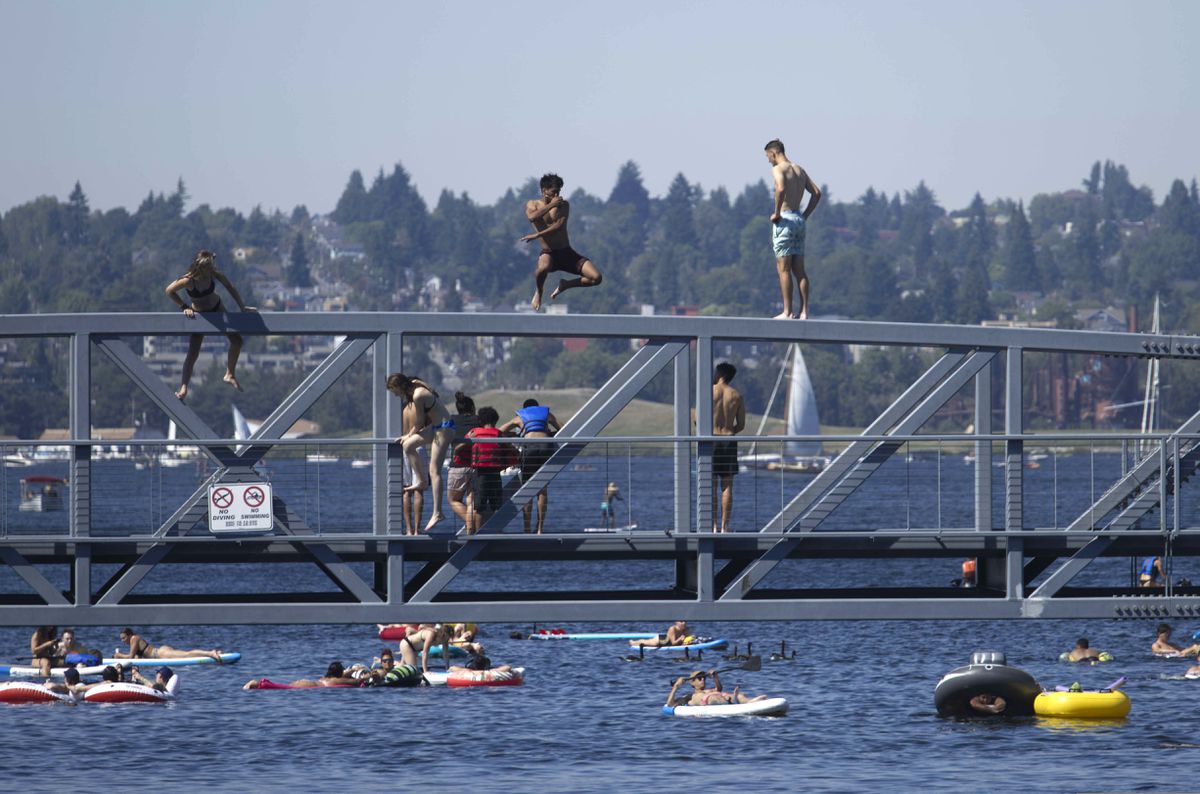 Two people jump from a pedestrian bridge at Lake Union Park into the water during a heat wave hitting the Pacific Northwest, Sunday, June 27, 2021, in Seattle. A day earlier, a record high was set for the day with more record highs expected today and Monday. (AP Photo/John Froschauer)

Two people jump from a pedestrian bridge at Lake Union Park into the water during a heat wave hitting the Pacific Northwest, Sunday, June 27, 2021, in Seattle. A day earlier, a record high was set for the day with more record highs expected today and Monday. (AP Photo/John Froschauer)

SEATTLE — The hottest day of an unprecedented and dangerous heat wave scorched the Pacific Northwest on Monday, with temperatures obliterating records that had been set just the day before.

The temperatures were unheard of in a region better known for rain, and where June has historically been referred to as “Juneuary” for its cool drizzle. Seattle’s average high temperature in June is around 70 F (21.1 C), and fewer than half of the city’s residents have air conditioning, according to U.S. Census data.

The heat wave stretched into the Canadian province of British Columbia, with the temperature in the village of Lytton reaching 118 F (47.9 C) on Monday afternoon, marking a new all-time high recorded in Canada and hotter than the all-time record in Las Vegas.

The heat in Seattle forced schools and businesses to close to protect workers and guests, including some places like outdoor pools and ice cream shops where people seek relief from the heat. COVID-19 testing sites and mobile vaccination units were out of service as well.

The Seattle Parks Department closed one indoor community pool after the air inside became too hot — leaving Stanlie James, who relocated from Arizona three weeks ago, to search for somewhere else to cool off. She doesn’t have AC at her condo, she said.

“Part of the reason I moved here was not only to be near my daughter, but also to come in the summer to have relief from Arizona heat,” James said. “And I seem to have brought it with me. So I’m not real thrilled.”

The heat wave was caused by what meteorologists described as a dome of high pressure over the Northwest and worsened by human-caused climate change, which is making such extreme weather events more likely and more intense.

Zeke Hausfather, a scientist at the climate-data nonprofit Berkeley Earth, said Monday that the Pacific Northwest has warmed by about 3 degrees F (1.7 degrees C) in the past half-century. That means a heat wave now is about 3 degrees warmer than it would have been before — and the difference between 111 degrees and 114 is significant, especially for vulnerable populations, he noted.

“In a world without climate change, this still would have been a really extreme heat wave,” Hausfather said. “This is worse than the same event would have been 50 years ago, and notably so.”

The blistering heat exposed a region with infrastructure not designed for it, hinting at the greater costs of climate change to come.

In Portland, light rail and street car service was suspended as power cables melted and as the heat strained the power grid.

Heat-related expansion caused road pavement to buckle or pop loose. Workers in tanker trucks in Seattle were hosing down drawbridges with water at least twice a day to keep them cool to prevent the steel from expanding in the heat and interfering with their opening and closing mechanisms.

“Washington state was not built for triple digit temperatures,” she said.

In many cities in the region, officials opened cooling centers, including one in an Amazon meeting space in Seattle capable of holding 1,000 people. Officials also reminded residents where pools, splash pads and cooling centers were available and urged people to stay hydrated, check on their neighbors and avoid strenuous activities.

The closure of school buildings halted programs such as meal services for the needy, child care and summer enrichment activities. In eastern Washington state, the Richland and Kennewick school districts paused bus service for summer school because the vehicles aren’t air-conditioned, making it unsafe for students to travel in them.

Orchardists in central Washington tried to save their cherry crops from the heat, using canopies, deploying sprinklers and sending out workers in the night to pick.

Alaska Airlines said it was providing “cool down vans” for its workers at Seattle-Tacoma and Portland international airports, where temperatures on the ramp can be 20 degrees higher than elsewhere.

The county had 43 emergency department and urgent care clinic visits for heat illness from Friday to Sunday. Typically, there would be just one or two, Sullivan-Springhetti said.

Dr. Jennifer Vines, the Multnomah County health officer, said she believed there would be deaths from the heat wave, though how many remained to be seen.

“We are worried about elderly and we are certainly worried about people with frail health, but kids can also overheat easily,” Vines said. “Even adults who are fit and healthy — in temperatures like these — have ended up in the emergency department.”

The heat was heading east, where temperatures in Boise, Idaho, were expected to top 100 F (38 C) for at least seven days starting Monday.

Cline is a corps member for the Associated Press/Report for America Statehouse News Initiative. Report for America is a nonprofit national service program that places journalists in local newsrooms to report on undercovered issues. She reported from Portland, Oregon. AP video journalist Manuel Valdes contributed.

Gene Johnson is a Seattle-based reporter for the Associated Press.