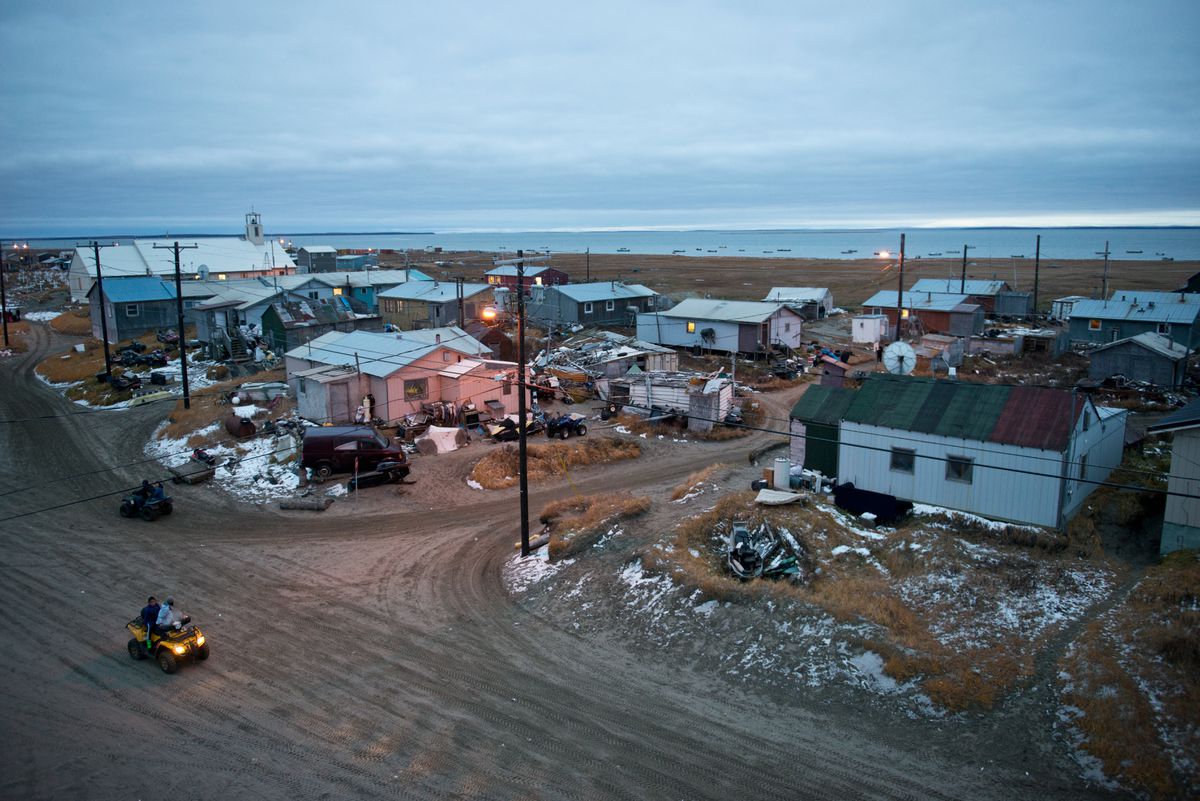 Shishmaref, on a barrier island on the Chukchi Sea coast in Northwest Alaska, is a village of less than 600 residents. (Marc Lester / ADN file 2013)

Shishmaref, on a barrier island on the Chukchi Sea coast in Northwest Alaska, is a village of less than 600 residents. (Marc Lester / ADN file 2013)

The people of Shishmaref had been fighting erosion of their sandy island long enough to know it was time to move back from the Chukchi Sea as soon as possible.

"Even in the summer we are losing ground," Morris Kiyutelluk told a visiting U.S. senator at a field hearing in Kotzebue, referring to studies going back to 1958.

"We had a survey voted on at a general meeting. There was not one person in there that didn't want to move," Kiyutelluk said.

Impressed with the degree of  support on the 3-mile-long island, the senator exclaimed, "No one that didn't want to move!"

"Yes. They all wanted to move. It is serious," said Kiyutelluk.

The exchange took place on Aug. 11, 1973, at a hearing presided over by then-Sen. Mike Gravel.

"The only solution and certainly the one I would recommend, would be that you think in terms of moving the village to a better point where erosion would not be a problem," Gravel said.

Shishmaref, located just north of the Bering Strait and 126 miles northwest of Nome, found another reason to move when a fall 1973 storm washed out about 30 feet of beach. The village would move within two years, a representative of then-Gov. Bill Egan predicted after a visit with local leaders.

But the move never took place, a reflection of a quandary about policy and finance that continues to this day.

[Shishmaref votes to relocate from eroding barrier island to mainland]

Questions about soil and logistics stopped the early 1970s momentum,  and "a new school was constructed in 1977 lending an air of permanence to the village," the Natural Resources Conservation Service said in a 2007 report.

An airport construction project, erosion control measures, renovation of the school and other improvements over the decades all added to the "air of permanence" and the population grew.

Major storms continued to eat away at the island, however, and in July 2002, the village voted 161-20 to move.

The costly question no one could answer was how to pay for it.

At the time of that second community decision to move, Sen. Ted Stevens still held the power to direct millions in federal money to projects he supported in Alaska. But even Stevens at the height of his earmarking powers couldn't get hundreds of millions to move small villages at a cost of hundreds of thousands per person.

There are efforts today in Shishmaref to repave the runway, improve the bulk fuel storage facilities, provide teacher housing and make other infrastructure investments.

All of those things may be needed to keep the village viable, but improvements to the existing site weaken the momentum for moving, despite rising sea levels and stormy weather.

Perhaps that is one reason why the vote this month to move the village was nowhere near as one-sided as the unanimity displayed in the 1970s or the overwhelming vote in 2002.

The community has not moved, despite decades of talk, because it's been impossible to get anyone to pay for it.

A 2005 study by the Army Corps of Engineers put the cost of building a new town with the same facilities at $180 million. It said moving the residents to right next to Nome would cost $93 million.

The dilemma here is the use of existing government  programs for costly incremental improvements in Shishmaref bolsters the case for staying put as long as possible — while continued erosion and rising sea levels lead a majority of voters to favor an immediate departure.

The latest vote was 94 in favor of moving and 78 in favor of trying to protect the island site, a lack of consensus that will make it more difficult to generate the political backing necessary to get  government money to create a new Shishmaref.

A 2015 plan about future options  predicted the election would provide a "clear vision of Shishmaref's future so the community can start concentrating" on what it does next.

The split vote clouds the clear vision, except to the extent that either approach represents an immense financial challenge over the long run.

Columnist Dermot Cole can be reached at dermot@alaskadispatch.com.  The views expressed here are the writer's and are not necessarily endorsed by Alaska Dispatch News, which welcomes a broad range of viewpoints. To submit a piece for consideration, email commentary@alaskadispatch.com. Send submissions shorter than 200 words to letters@alaskadispatch.com or click here to submit via any web browser.