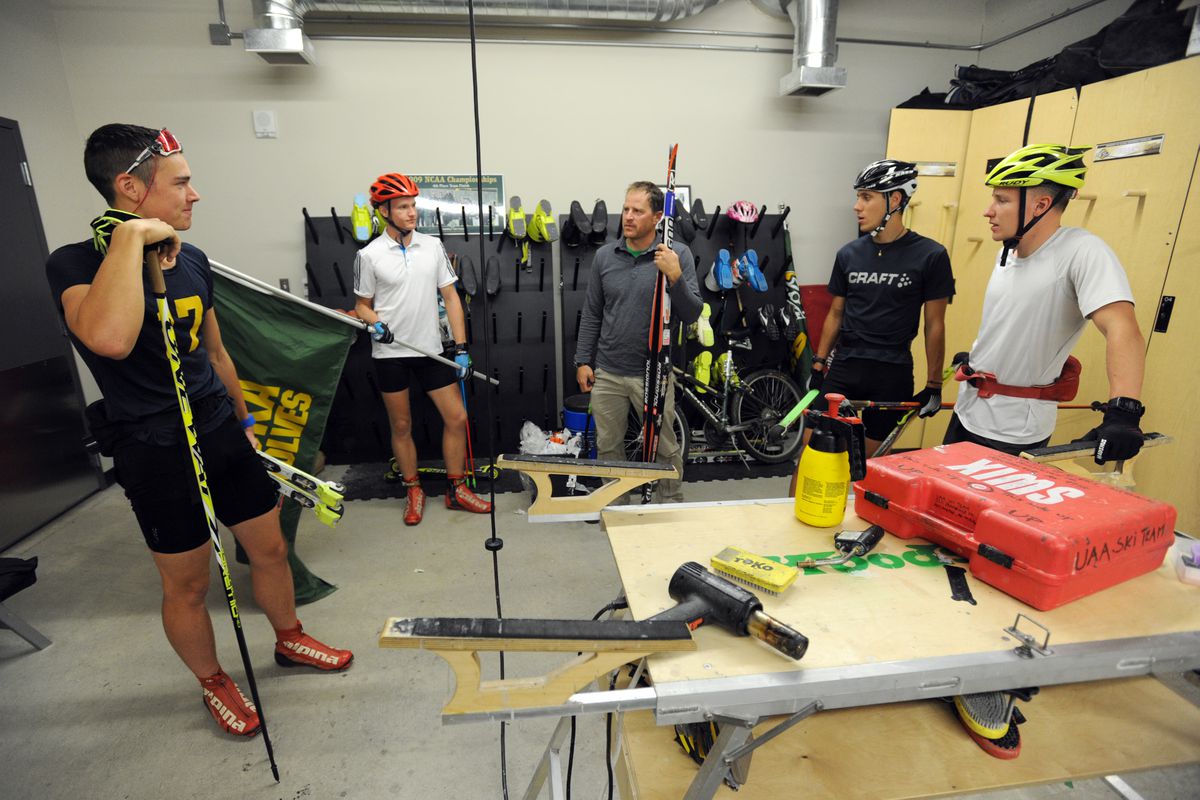 On the way to whatever the University of Alaska looks like after state funding cuts, we now have the idea of replacing cross-country skiing in Fairbanks with a golf team.

"The season when they're allowed to practice and the time we can be outdoors are so minimal," said University of Alaska Fairbanks ski and cross-country running coach Nick Crawford. "I don't see how they think the sport could work."

You're tempted to assume this is the Statue of Liberty strategy, throwing out ideas that make no sense to avoid cuts. But it could be the opposite.

UA President Jim Johnsen gave a stakeholder team the task of figuring out how to save money in athletics with the goal of cutting the general fund cost of the programs by 50 percent in four years and to make them free of cost by 2025.

The only real strategy likely to get to zero would be to eliminate athletics and make Alaska the only state without collegiate sports. Getting rid of the sports most appropriate to Alaska—the winter sports—could make that outcome easier to swallow.

All three of the strategies advanced by Johnsen's Strategic Pathways team do away with skiing (both nordic and alpine) and gymnastics at University of Alaska Anchorage, and at UAF eliminate cross-country skiing and riflery. The most expensive sport, hockey, would also disappear or take hits under any of the choices.

The university would then have to add back some sports to meet rules of the National Collegiate Athletic Association requiring Division II schools to have at least 10 teams. The pretzel logic of the situation leads to getting rid of skiing and adding golf and soccer, among other oddities.

[Read and weigh in on the Strategic Pathways report]

The university's budget went from $350 million to $325 million after work was done in Juneau this year. With the state still deeply in deficit, more cuts are likely. UA also faces huge deferred maintenance costs and an unfinished engineering building in Fairbanks.

And even under its former, richer budget, UA still had a long way to go to meet Alaska's needs. Our percentage of high school seniors going to college is dead last in the nation.

Facing challenges on this scale, it's reasonable to consider getting rid of all athletics, which will cost the university general fund around $8.5 million statewide (another $7.8 million comes into sports from fees, tuition, ticket sales and sponsorships).

I'm not a sports fan. Forced to choose, I would rather train Alaskans to be teachers, nurses and engineers than spend money on a relatively small number of athletes, the vast majority of whom come from outside Alaska.

But the choice itself speaks more to the poverty of Alaska's spirit than its economic condition.

UAA formed its ski team, its first sport, in 1978, before the big oil money arrived. The economy was in a slump after the construction of the trans-Alaska oil pipeline and the explosion of state oil revenue wouldn't start until the 1980s. Somehow, we managed to put skiers on the snow against other colleges.

That history is preserved at the spectacular new Alaska Airlines Center, where UAA teams practice and compete. Among the plaques on the floor marking team championships, the very first is for the women's ski team in its inaugural year.

The ski teams have been successful since, and in 2010 finished second nationally. Some of the biggest names in Alaska sports went through the university teams. A few early alumni now have ski trails named after them.

Erik Flora was drawn to Alaska to compete for UAA and be coached by Bill Spencer, a home-grown nordic skiing Olympian. Today, as head coach at Alaska Pacific University, Flora guides Kikkan Randall and other Olympians. He transformed that team, which doesn't compete in the NCAA, into a world-renowned powerhouse.

I met UAA's ski coaches and athletes at the Alaska Airlines Center this week, with its superb facilities for the ski and gymnastics teams. The center opened two years ago at a cost of $109 million. Alpine coach Sparky Anderson ruefully agreed that the ski team's facilities over at the old Wells Fargo sports center were perfectly adequate.

The same legislators who approved money for this athletic palace failed to plan for a future after oil, and now say the public must feel more pain from cuts before they will vote for a fiscal plan that would bring new revenue into the state budget. If they persist, we'll get to feel the pain of driving past their sports center without sports.

But the truth is we can afford to have ski teams in Alaska.

The teams can raise money and they can cut costs. UAA's ski team could reduce travel costs, give fewer scholarships, sell sponsorships and raise donations. The coaches have never been asked to raise money.

With a budget of about $500,000, the UAA ski team currently has about 25 skiers, almost all from Outside. The APU Nordic Ski Center spends about the same amount, Flora said, but has 250 skiers, including masters and junior skiers, locals who pay their own way with fees. With APU always in financial straits, the team raises most of its own funds.

A club team like APU is quite different than an NCAA team like UAA. But maybe UAA skiing should quit the NCAA. I don't know. The point is that there are different choices than either paying state cash for everything or doing away with something as fundamental as skiing.

Problems like these—and there will be more—call for a shift in our thinking. In our old way of doing things, we assumed state oil money would always pay the bills. Our decision-making atrophied into just saying yes or no to spending free money.

Life after oil will mean innovation and paying our own way. We'll have to contribute taxes and donations for the things we want.

But we don't have to give up being Alaskans, sending our skiers out to play golf.

Correction: An earlier version of this column incorrectly reported the University of Alaska's current budget. It is $325 million not $315 million.